If I had only one word to describe the Datça Peninsula, it would be “wildly romantic”. A completely unexpected world welcomes the visitor on the 80 km stretch from bustling Marmaris to the “finger tip” in Knidos. The Datça Peninsula simply has everything that makes Turkey such a great destination: delicious traditional Turkish food, beautiful bays and beaches and remnants of its ancient past.

Where is the Datça Peninsula located?

The Datça Peninsula is located east of the city of Marmaris in southwestern Turkey and sticks out like a finger into the Aegean Sea. It is also called the Reşadiye Peninsula (mostly in the 20th century).

Want to escape the hubbub of Marmaris and see a different Turkey? Get a rental car and follow our route. Start early, as the route on the winding country road is long and there is plenty to see on the way. Pack a swimsuit for a detour to one of the beautiful beaches, some of which are also Blue Flag certified.

Here are the highlights of the Datça Peninsula:

We set off from the TUI BLUE Grand Azur Hotel in Marmaris in the morning after filling our bellies at the breakfast buffet. You never know when the next eating opportunity will come (this fear will turn out to be completely unfounded…).

On the D400 road, we leave the city in the direction of Datça, passing pine forests. Again and again, safari vehicles, quads and buggies are waiting at the side of the road to drive tourists over hill and dale along designated paths. If you like it wet and dirty, I can recommend a buggy tour, which you can book at any hotel in Marmaris. My colleague Dirk and I tried it the day before and didn’t like it at all. We found it downright awful and think back to this buggy tour with horror. But hey, everyone likes different things, and that’s why we were on fire for the discovery tour on the Datça peninsula. Stop where you want, do what you want and you stay clean 😉

We took the winding, well-maintained road through increasingly mountainous terrain. Pine forests alternate with rugged rock and the turquoise sea glistens to the left and right. At its narrowest point, the Datça Peninsula is only 800 m wide. Unfortunately, there are not many opportunities to stop. For hikers, this would certainly be a dream to come across hidden bays. Some of them are actually only accessible by boat, e.g. Hurmali Bük.

It takes quite a while, certainly three quarters of an hour, until the first village Aktur appears after the amazing panoramas. Aktur has a long sandy beach, restaurants and cafés and is mainly visited by Turkish tourists. In general, the Datça peninsula has been spared from mass tourism, probably because of the less easy access. So if you are already hungry or would like to swim, you could make your first stop in Aktur. We didn’t do that because we were still well satiated and hungry for sightseeing instead.

So we skipped the beautiful sandy beach of Karaincir and drove on through Reşadiye to Eski Datca, where we made our first real stop. 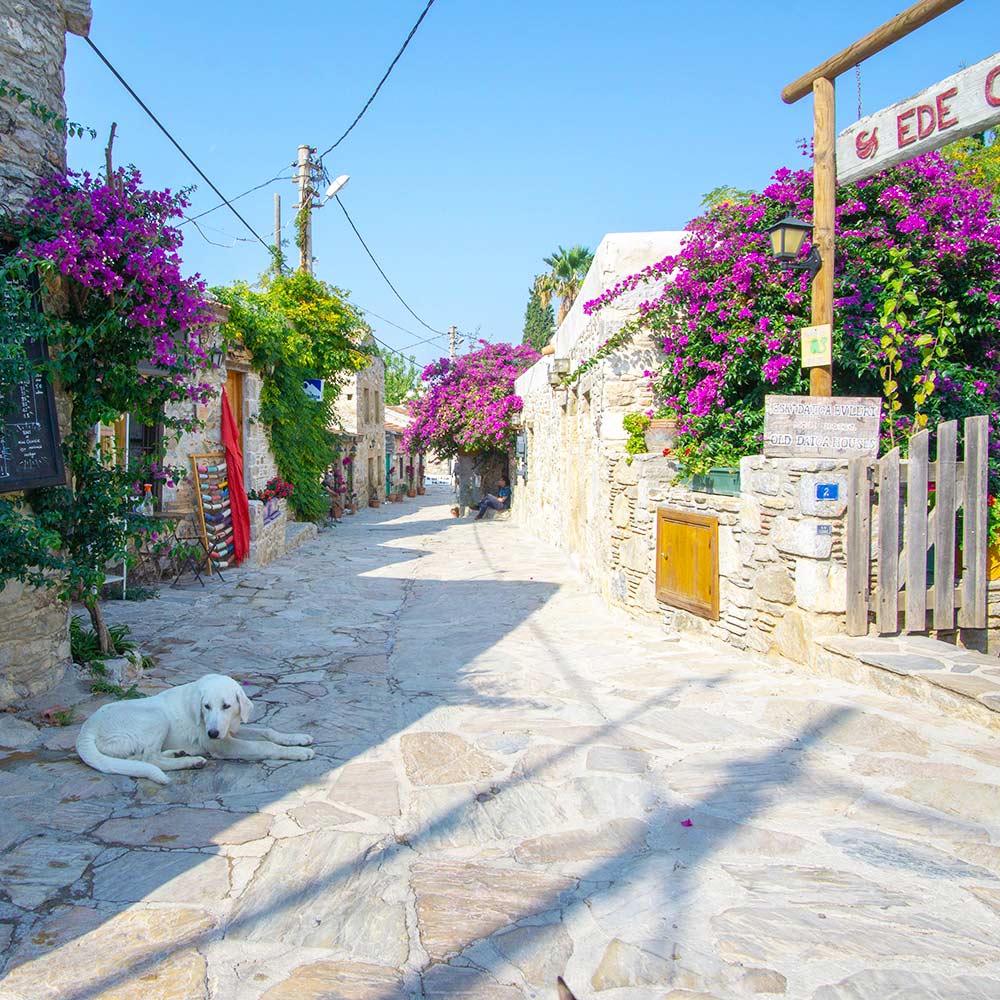 Eski Datça means “Old Datça” and is situated a few kilometres above the newer village of the same name. From up here you can look down to the village of Datça and the sea. But our eyes remain glued to the stone houses of the cute traditional old town with narrow streets in Eski Datça. Bougainvillea hang decoratively over the stone walls, cats lie lazily in front of house entrances and visitors enjoy an extensive Turkish village breakfast, which in Turkey is not only served in the morning hours. Such a lavish Turkish breakfast is a must! 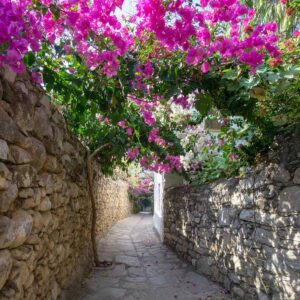 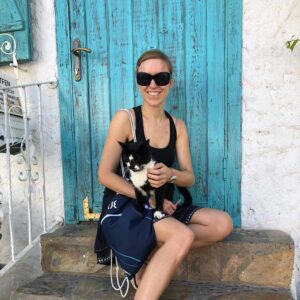 We regret a little that we helped ourselves so much to the buffet at the hotel and are now not hungry… We stroll aimlessly through the quaint alleys past the market stalls of local artists, let the old walls take their effect on us and admire the richness of detail in the furnishings of the cafés. 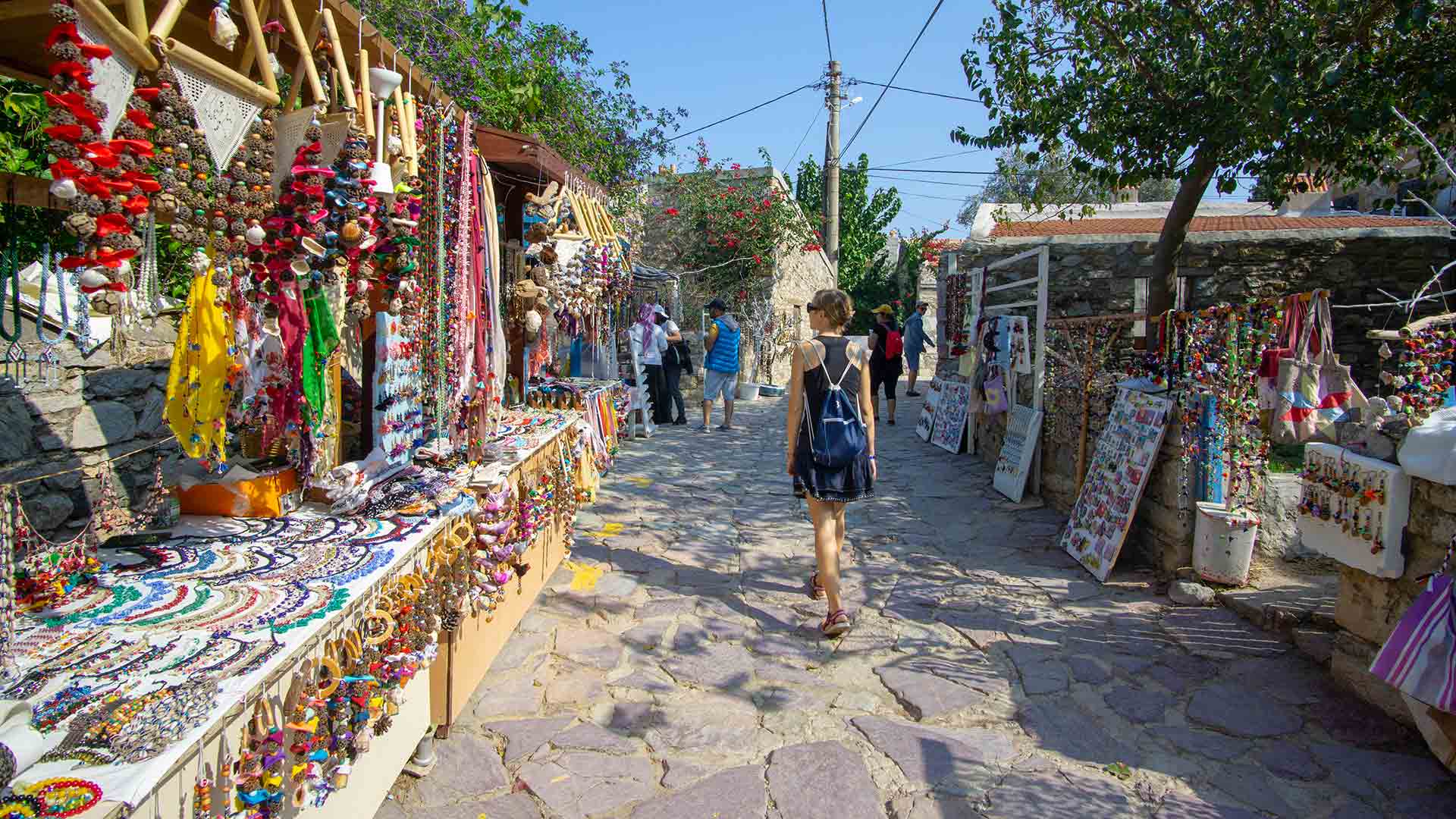 Eski Datca is pleasing without being pretentious. Apart from us, there are only a few Turkish tourists. It is wonderfully unexciting and relaxed. After taking far too many photos and petting far too many cats, we are drawn to the sea. 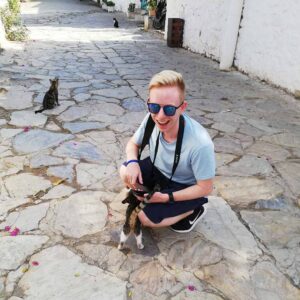 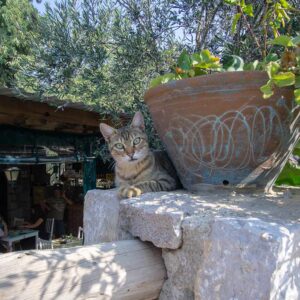 EIt’s a steep 3 km down the road to Datça. The town that gave the Datça peninsula its name is located on the south side of the peninsula and looks out onto the Greek islands of Simi and Rhodes. We park the rental car at the harbour and walk along the promenade. Here we can hardly decide which of the cute beach restaurants on Datça beach to choose for our lunch. One is more beautifully decorated than the other.

We decide on one under a roof of grapevines with a view of the sea and the kitchen from which the delicious food comes. We can literally watch the landlady preparing the fresh home cooking. We order börek with cheese, manti (Turkish ravioli with yoghurt sauce) and stuffed courgette flowers.

I can’t say often enough that Turkish cuisine is one of the best in the world. Simple and simply good. The prices are very moderate for us (thanks to the exchange rate).

To the tip of the Datça Peninsula to Knidos

It is already quite late, but we want to make it to the tip of the Datça Peninsula. The D400 road ends here and we drive the last 35 km to Knidos on a smaller, but equally well built and winding road. It becomes noticeably lonelier again and the rocks more rugged. Abandoned houses alternate with picturesque bays where boats anchor or fishermen camp. The largest Datca beaches here are Ovabükü Plaji and Palamutbükü Plaji. Both are accessible by car.

Shortly before Knidos, we are fascinated by the aquamarine waters in the small bay of Giynap Koyu. When we arrive in Knidos, the road also ends and to our right is the ancient city. The first finds date back to the 12th century BC, but the actual city was founded by the Dorians (“Doric columns”) in the 4th century BC.

If you don’t want to pay the entrance fee (as of August 21: 17.50 Lira), you can simply look through the fence or over it. The remains of the ancient city spread out on terraces over the mountain. It is famous for the statue of the naked Aphrodite of Knidos, who looked out to sea over the ancient port city. It is considered lost. However, you will miss the beautiful reliefs, the Temple of Apollo, the amphitheatre and the view over the complex and down to the sea. From higher up, you can also see the islands of Rhodes and Kos. 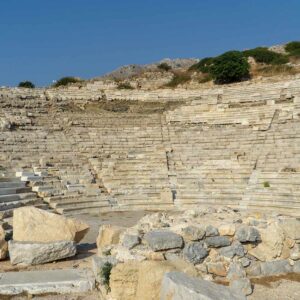 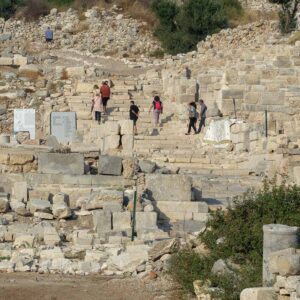 The ancient harbour of Knidos is still so well preserved that we can vividly imagine how the boats entered the round basin protected by a peninsula.

To the left is a small pebble beach where boats anchor and locals picnic under pine trees. I refresh my feet in the crystal-clear water.

Then it’s time to head back towards Marmaris, as the journey is a long one.

Datça: Datça: the land where oil and honey flow from the suitcase

On the way back, we stop at one of the shops that keep popping up offering local specialities. The region around Marmaris is famous for its pine honey. We try a few types of honey and also some cold-pressed olive oil. In the end, we are well supplied and leave the shop wondering how it will all fit into the suitcase and whether oil and honey will flow out of it when we arrive… Spoiler: everything remained intact and delighted the recipients. By the way, wine is also grown and sold on the peninsula. Wine tastings are also possible.

Information about the journey to the Datça Peninsula

We drove a total of 200 kilometres over the Datça Peninsula that day, but it was well worth it. Alternatively, you can just drive to Eski Datça and Datça town if you are not so interested in Knidos. This saves you almost 2 hours of driving. Or you can hike a bit on the peninsula and enjoy the fantastic views. The best time is spring or autumn. In summer it would simply be too hot. A ferry leaves for Bodrum north of Reşadiye. Check the departure times beforehand.

You can book an organised excursion to the Datca Peninsula with wine tasting here.

Best starting point for a tour of the Datça Peninsula

Marmaris (nearest airport Dalaman) is the perfect base for exploring the province of Mugla. On the one hand, you have the beach right in front of you and, on the other hand, all the advantages of a city. In the surrounding area, the Bozburun Peninsula and Akyaka are also worth a day trip with a short drive.

Here are the top 10 highlights of Marmaris and the top 10 sights of the Dalaman region.

We stayed at this all-inclusive hotel in Marmaris. Highly recommended and run by a woman (girl power!):

You can find our TUI BLUE travel accessories in the BLUE Shop.