I know exactly what my Croatian holiday in TUI BLUE Jadran will look like. In the morning I’ll breathe in the scent of the pine forest from my balcony and look out as the sun rises behind the mighty Biokovo massif. If I have a room facing the sea, I’ll listen to the sounds of the ocean before I go down to the breakfast buffet. Maybe I’ll have a suite with a swim-up pool and refresh myself in the basin, which lies in front of my terrace. What a luxury! But the real luxury of the hotel is its location. I’ll have a hard choice between a beach day at the crystal clear sea, a trip to one of the picturesque old towns of Makarska, Split, or Omiš, or even rafting in the hinterland. I’ll opt for a relaxing day in the hotel. At some point I’ll get hungry and sample the Croatian Dalmatian delicacies in one of the restaurants at the TUI BLUE Jadran, secretly hoping there’s Cevapcici with Ajvar. In the afternoon, my conscience will tell me that I should try one of the BLUEf!t sports, but I’ll opt for the sweet idleness of a daybed instead. The view of the sea and islands is incredible! In the evening, I’ll take a little stroll along the well-kept promenade of Tučepi, then admire the surreal sunset from the pool deck, the beach, or the roof terrace, where I’ll have a panoramic view on the Makarska Riviera with a cocktail in my hand. At the beach barbecue (Ćevapčići and grilled paprika!) I’ll take in the the gorgeous, starry sky, which is more enormous than any you’ll see in a big city. At night, I’ll leave the balcony door open and let the sound of the waves lull me to sleep.

TUI BLUE Jadran – a hotel with a lively history

Doesn’t that sound like a dream? It still it is one, because the TUI BLUE Jadran is still under construction and will open on July 1st, 2017. A few kilometres from Makarska, on the edge of the village Tučepi, lies the newest 4-star hotel by TUI BLUE on the Croatian Adriatic coast. It follows in some famous footsteps. The previous, historic Hotel Jadran in Tučepi was a local place everyone can still tell an anecdote about. One of them is the legend that after the war the intelligence chief of socialist Yugoslavia was boating along the Adriatic coast, looking for a spot for a luxury hotel. This beautiful stretch of coast cast a spell on him, and so the idea for Hotel Jadran was born. “Jadran” means “Adriatic” in Croatian. The construction of the Hotel Jadran, the first hotel on the Yugoslav coast, began in 1948. The luxury hotel was designed by one of President Tito’s favorite architects, Branko Bon, in the Bauhaus style. At the time, right after the war, the building of the hotel was quite an achievement. There was a shortage of building materials, so the pipes of a recycled ship were installed. First, the Hotel Jadran was used by the UDBA, the Yugoslav secret police. In the 1950s it became a civilian luxury hotel, where anyone with rank and name in Yugoslavia could vacation. Stars performed here and foreign statesmen stayed in Jadran. As tourism on the Dalmatian coast began to flourish, the Hotel Jadran started focusing on the average traveller. As the decades passed, the hotel became dilapidated and was condemned to be demolished. Then the Yugoslav Wars broke out and the building was used as a hostel for refugees. The hotel rapidly disintegrated during this time and should have been torn down for other projects, but the Croatian government put it under monument protection because it had historical value as the first hotel on the Croatian coast. Since then it has crumbled even further, was looted, and is now – to say the least – no longer photogenic. 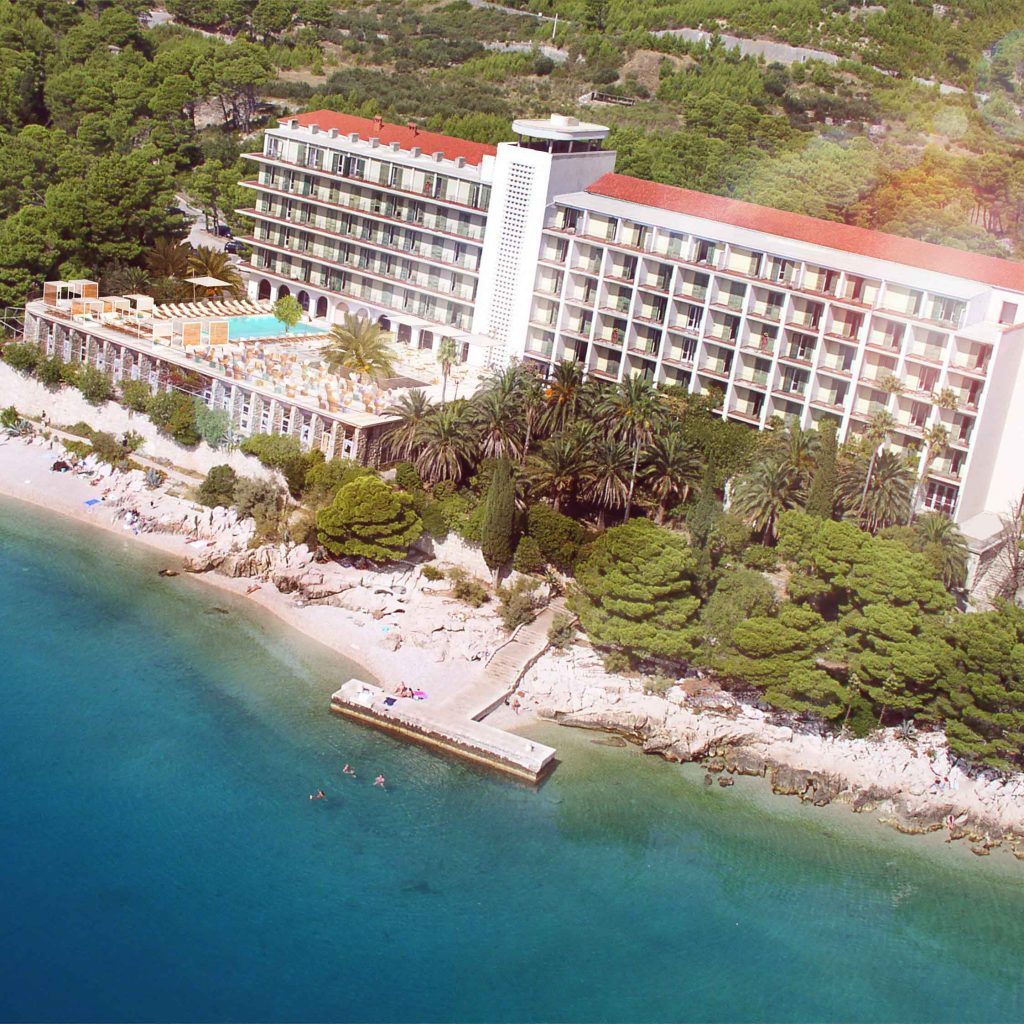 As the jewel it is, it deserves to shine in new splendour. At the moment it is completely gutted while preserving, for example, the iconic façade with its balconies. The locals, who all have a lot of personal memories of the Hotel Jadran, are curious to see what it will look like as a TUI BLUE property. So am I. The computer-generated designs I’ve seen
are extremely promising and, between those and the the site visit, I can definitely say that this will be a dream holiday à la TUI BLUE. Right now I’m working on the website for the TUI BLUE Jadran, where you’ll find all the details about the rooms, restaurants, etc. If you’re already dreaming about grilled Ćevapčići (or peppers, or fish…), you won’t have to wait much longer. Croatia is rightly a very popular destination, particularly the stunning coastline of Makarska.