It should be clear to everyone that the term “peace and quiet” is also a foreign word on the slopes in Schladming. So what could be more obvious than to join BLUE Guide Michael on a search for huts in Schladming where you can find not only peace and quiet, but also the rustic atmosphere of old and beautiful mountain huts.

Restful alpine hut in Schladming as an alternative to après-ski

The hustle and bustle in the huts directly on the slopes is already tremendous, down at the après-ski bars no less. What skiers love is not necessarily everyone’s cup of tea; after all, there are also people who seek peace and quiet in winter. And we at the TUI BLUE Schladming went in search of just that. Okay, there was one particularly rustic hut, which is located on a piste, another one can also be found on a piste, but it is more frequented by tobogganers. Here are the 4 best quiet Schladming huts with a cosy atmosphere for your next holiday:

1. Styrian cordiality at the Hochwurzenalm

And we start with the hut next to the toboggan run: “Drive up to the Hochwurzen”, suggested BLUE Guide Michael at the TUI BLUE Schladming. From there, you have to walk a few metres down the toboggan run and you’re already in front of the Hochwurzenalm. It opens its old doors from December to Easter, behind which guests are transported back to the rustic atmosphere of old mountain hut days – but combined with very good cuisine that provides guests with delicious home cooking. Which means that on some days it is better to pre-order one of the tables. “We serve our dishes with a large portion of Styrian cordiality,” the hut says – a statement to which there is really nothing to add. By the way, after a rest, enjoying a snack or home cooking, you can also get down to the valley in winter via the 4-seasons hiking trail. The advantage of this is that you can run off the calories you have just consumed in just under one and a half hours to the valley station of the Hochwurzen cable car. One of the best alpine huts in Schladming in winter!

Just a few steps from the TUI BLUE Schladming Hotel, the path to the rustic Uncle Willy’s Hut begins, because you can reach it with the Planai cable car, which not only takes skiers quickly up to 1828 metres. The traditional establishment is located near the mountain station of Schladming’s local mountain. In the cosy parlour, visitors will find many carvings and tools related to the old alpine farm and winter sports. And you are spoiled with a menu in which traditional dishes play a special role.

Incidentally, the hut has been around since 1968, the year in which construction of the “Tauernblick” snack bar began. Strictly speaking, the story begins in 1966, because in that year landlord and innkeeper Willy Thaler wanted to start building there – but the early onset of winter threw a spanner in the works. Nevertheless, he started catering for the guests: he built a snow bar from the material that had already been delivered. Incidentally, the name “Tauernblick” never caught on, but the hut, which has always been expanded but still remains rustic, is known as “Uncle Willy’s Hut” far beyond Styria.

Sladming huts off the slopes: How do I get there?

You can get to two cosy highlights in Untertal so completely off-piste: the Waldhäusl-Alm and the Gasthof Weiße Wand.

Both mountain huts – or rather mountain inns – can be reached on the way to the Wild Waters in Untertal above Schladming. This trail is perfectly signposted from Rohrmoos, and the drive there is toll-free.

In winter, the road ends at the Waldhäusl-Alm. The alp can also be reached by public bus, which also runs regularly in winter. Since 1988, the Alm has been the starting point for hikes in the Untertal valley and is a meeting place for all those who enjoy fish dishes. They are freshly prepared, the alp is located directly on two ponds that were dammed in the mid-80s for fish farming on the meadows in Untertal. What could be more natural than to spoil the guests with fish dishes? How about the whole roasted Arctic char with garlic-herb butter and potatoes or the grilled char fillets on Gerstl vegetables with hazelnuts and cabbage sprouts? Gourmets will also find many a delicacy among the alpine specialities, including the grilled pieces of lamb, the tender venison ragout or the “Waldhäuslalm” house pan for two or more people. They can expect grilled and baked pieces of pork and turkey.

4. Only accessible on foot in winter: Gasthaus Weiße Wand

The Untertal, from the Waldhäusl-Alm onwards in winter only accessible on foot, on snowshoes, the Fatbike, the dog sled 😉 or with cross-country skis, offers another attraction a few kilometres into the valley: the Gasthof Weiße Wand is almost the last stop in the Untertal – at least in winter. The house has been around for over 300 years and is one of the most rustic alpine huts in the region. Here, where you can start long winter hikes also to the nearby Riesach Falls and the Riesach Lake, winter hikers, snowshoe hikers, cross-country skiers and touring skiers can expect lovingly made cakes, pastries and “g’schmackige” dishes from the region.

Summary: Which is the best hut in Schladming in winter?

Take a look at the photos and menus and decide for yourself. We find them all highly recommendable. Whether you make a pilgrimage from hut to hut around Schladming or just feast in one of the alpine huts in Schladming, you won’t be disappointed.

Are you still looking for a centrally located ski hotel in the Styrian town of Schladming? The TUI BLUE Schladming is located directly at the Planai valley station. 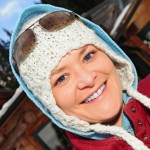 Heike is a typical Austrian girl. Born and grown up in Carinthia, at home in the mountains, she loves everything that has to do with nature and outdoor activities. Her favourite clothes – scarf, gloves and a thick jacket show that she is an absolute winter enthusiast. She very much enjoys heavy snowfall and a winter wonderland landscape.