It was the end of May when I found myself at the Schladming Congress Centre, the meeting place of the Exclusive Auto Corso 2000, with my dark BLUE cap pulled over my eyes and my sunglasses in my shirt, looking at a well-equipped, brightly polished Mustang. What happened in front of the congress halls was madness, and we were in the middle of it with a carriage better than any other. We met for the upcoming event with a film crew and a few drivers, along with the cool mobile pedestals from the TUI BLUE Schladming – let’s just say there was a lot of horsepower present! After shooting part 1 of the video at the TUI BLUE Schladming, where I was spontaneously pulled in to play an extra as a waiter, we were already excited for part 2 – the so-called “driving” segment. But there was one we couldn’t do without: our new colleague, obviously.“Allow me introduce myself. My name is FORD…FORD MUSTANG! I’ll enchant you with my 5.0-litre engine, 422 horsepower, and leather seats, all of which make a tour with me unforgettable!”

Here’s how we met: with an alcohol-free shandy in my hand, I gazed at my (unfortunately borrowed) Mustang with the snow-covered Dachstein towering in the background and the gentle sound of the Enns rushing nearby. We were to do two rounds through Schladming – up Serpentinenstrasse, climbing 400 metres to Ramsau, then back down to Schladming, and then do the whole route all over again! …and ACTION, please! As soon at the words “Action, please!” were uttered, a murmur went through the crowd and an Audi R8’s Agropovic exhaust system roared over the sounds of the Enns. Slowly, the train of luxury cars started to move, followed by the intrigued eyes of the many holidaymakers and local residents. And with good reason: there was well over 8,000 horsepower rolling past them. 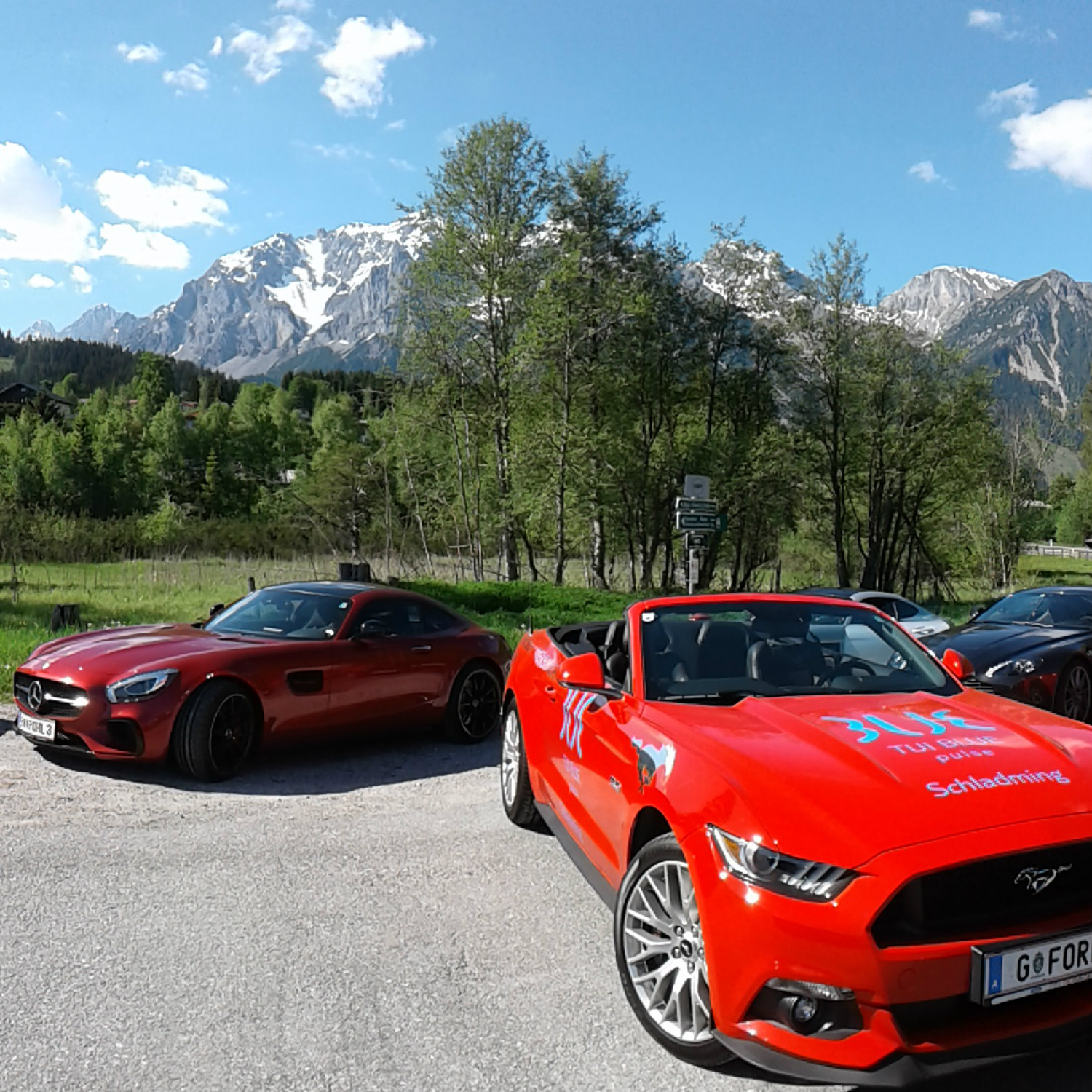 A Boy’s Dream Comes True: High in the Mountains with a Mustang

Past the country market, left at the roundabout, and we were already in the centre of Schladming, and thus at the centre of attention. Even more eyes – even more astonished looks, confused glances, and delighted grins – followed the Ford Mustang and the other sports cars as they made the city rounds. Some cameras were pulled out to capture the scene that was unfolding. Admittedly, I thought I was a pretty big deal – rolling past the spectators like James Bond – and I put on the sunglasses that were casually dangling from my shirt. Inside, I was jumping up and down like a small child, but for the audience I played the cool guy who was rolling past them in a bright, red Mustang. The ride from the Congress Centre to the city centre through the city gate was really nice, but the exciting part – for the Mustang – came just outside the city: the trip to the Ramsau. SWITCHBACKS, SWITCHBACKS, SWITCHBACKS!!! Grinning, knowing it would be noisy, the drivers threw their companions into sport mode. Oh, man – then it was on. With a loud roar, the convertible raced up Ramauerstrasse, which made even experienced drivers sweat. Imagine 18 sports cars, all with good-humoured owners, a picture book panorama, and eager feet on the pedals spurring them on. The scents of brake pads, gasoline, and stressed clutches – smelling like burnt hair, though somehow pleasant – were on the air. 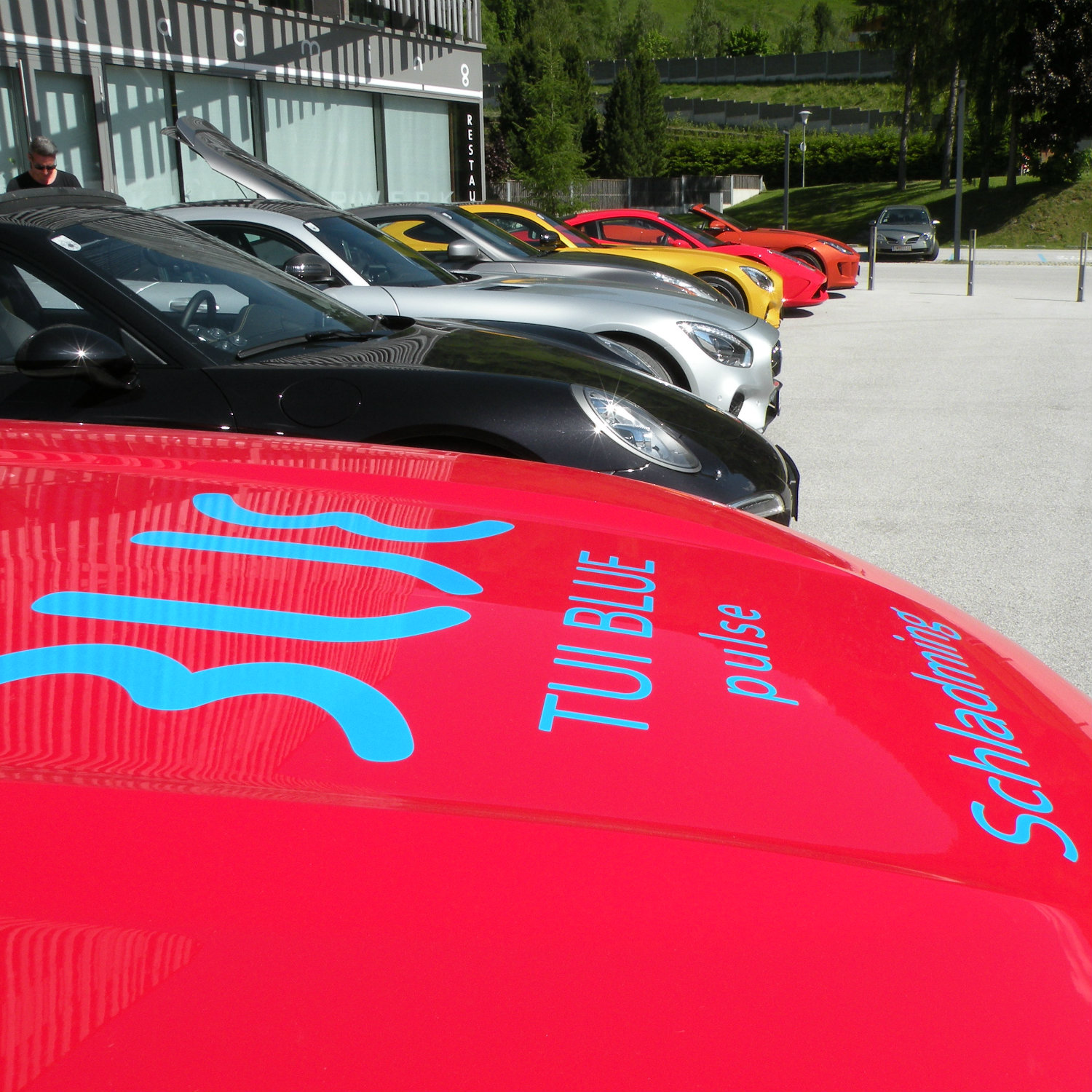 After going up and down the route several times, the final rally point in Ramsau was the “Place to Be”. This was where we left the convoy after a big scene of grateful farewells. Some of the others then took the toll road toward the Dachstein. After a short break, the Mustang and I went home. We stopped by a filling station to refuel and returned to the Hotel TUI BLUE Schladming, where the sports car is available for guests to borrow. Our new colleague is back at his new place, waiting to go out with you next time.

[vc_text_separator title=’Info’ title_align=’separator_align_center’ border=’no’ border_color=” background_color=” text_color=”]
Do you also want to make this dream a reality? The Hotel TUI BLUE Schladming offers the Ford Mustang convertible for hire. You can find all the information in the overview.