Is Tropea worth visiting? Oh yes it is! Never heard of Tropea? We’ll make up for it in this blog article, so that you don’t miss any of the sights during your visit to Tropea. I also have a few insider tips for you. Tropea is considered one of the most beautiful villages in Italy and the pearl of Calabria.

I have been to Tropea several times. Although the place is already touristy in appearance, it has nevertheless remained normal. Away from the souvenir alleys, normal southern Italian life takes place on the streets: Men engrossed in board games on the piazza, children playing and elderly ladies sitting in front of the house talking about God and the world while stringing dried chillies on a string. Basil grows in pots on the front of the house with the biggest leaves I have ever seen.

Where in Italy is Tropea?

The small town of Tropea with about 6,000 inhabitants is located in the province of Vibo Valentia in Calabria. The region at the tip of Italy’s boot ekes out a rather shadowy existence in southern Italy between the more famous destinations of the Amalfi Coast and Sicily – totally undeservedly! Within Italy, the Calabresi have a bad reputation (‘Ndrangheta and corruption). However, the Corona crisis and the resulting increase in domestic tourism have convinced even the critical northern Italians that Tropea and also its inhabitants are much better than their reputation.

What to do in Tropea?

At the latest since Tropea made it onto the list of the “Borghi più belli d’Italia” (Most Beautiful Villages in Italy), a run on Tropea has begun – especially by Italian tourists. Here are Tropea’s highlights, insider tips and things to do in Tropea.

Tropea was first mentioned in the 1st century AD, was repeatedly hit by earthquakes and was economically weak until the burgeoning of tourism. A lot has happened in the center in the meantime. This is best seen in the renovated houses in the promenade Corso Vittorio Emanuele, one of Tropea’s main sights. Before, the condition of the facades ranged from “romantically dilapidated” to “desolate”. In the meantime, the place has become very pretty and, especially in the evening, the thing to do in Tropea is walk around the old town dressed up to see and be seen and take a drink in the heart of town.

On Corso Vittorio Emanuele, boutique hotels, small grocery shops, souvenir shops, ice cream parlours and restaurants alternate. It’s beautifully colourful and again and again the food on display invites you to take photos or simply to think about what you can do with a necklace of dried aubergines or dried chillies. You can also buy the “cipolle di Tropea”, the famous sweetish red onion from Tropea.

In summer, the municipality organises a remarkable cultural programme. From classical concerts, street music and performances to culinary festivals, it’s all here.

It’s worth turning off into the side streets, admiring the feudal baroque buildings in town and observing the life of the locals. Here you will also find the best restaurants offering typical Calabrian specialities. More on this later. 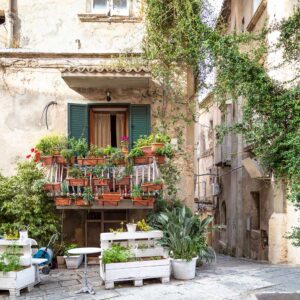 2. best viewpoint in Tropea with a view of the sanctuary

You’ve probably seen a photo of the Sanctuary of Santa Maria d’Isola. It sits on a rock on the beach and is surrounded by turquoise water. The best view of the island and the church is from the vantage point “Affacia del Corso” (marked on Google Maps). Here you will notice that Tropea stands on a 40-metre-high rock.

Just walk along Corso Vittorio Emmanuele towards the sea. At the end, you’ll be standing on a parapet with a side view of the cathedral and an amazing view of the sea and the beach. If you didn’t know you were in Calabria, you’d think you were in the Caribbean. The spot is popular and, depending on the position of the sun, it’s worth stopping by several times to take photos because of the shadows. If you manage to get a corner with a nice background among the horde of selfie influencers 😀

The cathedral divides the sandy beach into two sections. On the left is Spiaggia ‘A Linguata, on the right Spiaggia della Rotonda. Steep steps lead down from Tropea’s old town to the beaches. In summer the fantastic beaches are crowded. Outside of high summer, it’s more tranquil. From the beach you can see the tufa rock on which Tropea stands. Tufa is porous and the rock is therefore decoratively jagged. If you look out to sea, you will be captivated by the unreal colour. Like everywhere in Italy, there are fee-charging beach establishments which include sunbeds and parasols and there are sections with free beach.

Insider tip Tropea: If you walk along the Spiaggia della Rotonda away from the pilgrimage church to the other end of the beach, the “Grotta di San Leonardo” is hidden there at the end. You can enter the small grotto from the beach via an entrance carved into the rock or descend via a staircase from the town. To see the colour spectacle in all its splendour, you have to wait for the right moment.

4. Santa Maria dell’Isola – the Sanctuary on the Rock

If you’re already on the beach, you have to climb up to Tropea’s most famous landmark. This Tropea landmark can be reached via steep stairs – a sweaty affair in high summer. The early Byzantine former bishop’s church was built by the Normans, rebuilt again and again, or rebuilt and renovated after earthquakes like countless town landmarks. Once you’ve reached the top of Santa Maria dell’Isola, you’ll not only have a view of Tropea and the coast, but also of the mountains of Calabria and, on a clear day, even of the Lipari Islands with the smoking cone of Stromboli. Inside you’ll find an altar of the town’s patron saint, the Madonna of Romania.

Campania has pizza, Emilia-Romagna has ravioli and Calabrian cuisine has fileja alla ‘Nduja. You will see the most typical Calabrian pasta dish on menus throughout town. Fileja is twisted durum wheat pasta that looks as if it has been rolled on a knitting needle (traditionally a particular blade of grass is used).

If you’ve been wondering why there are so many dried chillies on sale in Tropea, you’ll know after a portion of fileja alla ‘Nduja. ‘Nduja is a paste-like sausage made of pork and lots of chilli. This is added to the pasta and the spicy pasta dish is ready. Be careful: it is very filling and if you don’t have room for dessert, it would be a sacrilege.

It doesn’t matter whether it’s a dessert or a snack – you haven’t really been to Tropea without eating tartufo. Tartufo means truffle, but has nothing to do with mushrooms. Strictly speaking, tartufo does not come from Tropea, but from Pizzo further north. The classic tartufo nero is a round lump of chocolate and nut ice cream with a liquid chocolate centre dusted with cocoa powder.

You can find affordable restaurants with regional cuisine throughout town.

Slims you down about as much as the ensaimada in Mallorca – not at all! The dessert is so powerful that it almost passes for a meal in its own right. Definitely try it, I love tartufo! In addition to the classic tartufo, there are also “fashionable” varieties such as tartufo bianco with white chocolate, or with pistachios or coffee flavour…

6. A trip to the Liparic island of Stromboli

Yeah okay, not a thing to do in Tropea, not even in Calabria. The Lipari Islands belong to Sicily, but can be seen from Tropea. From this seaside town you can take a day trip to the islands of Salina, Lipari, Vulcano, Stromboli, Filicudi, Panarea and Alicudi. Stromboli is the most striking island and immediately recognisable even to the layman: a volcanic cone that smokes merrily away. At night, you can sometimes even see it spewing glowing lava. It takes 1.5 hours by ferry from Tropea to Stromboli, the chain smoker. Organised excursions are available at any hotel in the area or in Tropea itself.

Shopping: What is Tropea known for?

Just strolling through the alleys of the coastal town, I discovered many cute souvenirs, so after the sightseeing, there was some proper shopping.

Where do you fly into for Tropea?

The nearest airport from Tropea is in Lamezia Terme and there are direct flights from several UK airports and other European countries. You can travel the 60 kilometres or so to the centre of town by rental car, taxi (expensive) or train (cheap). If you have booked a package holiday, the transfer to the hotel is usually included. The transfer time would be around 70 minutes. A rental car is worthwhile to reach the most beautiful corners of Calabria.

Most holiday hotels are located between Tropea and Capo Vaticano and have the luxury of their own stretch of beach on the Costa degli Dei (Coast of the Gods) with its hidden coves. The adults-only TUI BLUE Tropea hotel is just 3 km from the town centre and offers a pool, shuttle to the private beach section and unique views of the Lipari Islands. Perfect for quality time with your darling.