Fascia training has been a buzzword for a while now, and it’s apparently a serious craze. I’ve seen the term on the training plan at my local gym, when flipping through various lifestyle magazines, and even on Facebook posts of friends documenting their success in fascia training with selfies (I described how to take the perfect selfie in an earlier blog post). Okay, so I was curious and wanted to find out more about fascia training at the first opportunity I got.

Just such an opportunity came along during my stay in one of the TUI BLUE hotels offering fascia training. Waiting for me was the BLUEf!t Guide Lars, who – as a personal trainer – knows all about fascia training and even leads a course in it. Before heading over, I put my invitation to the training session in my pocket.

On to the Fascia Training

Equipped with a towel and a water bottle, I entered the covered training area to find that the first students had already arrived and started stretching. A short time later, Lars the BLUEf!t Guide appeared with a net full of round balls and rollers. He set these aside, saying, “Those will come later.” Instead, we formed a semicircle and warmed up with exercises like jumping jacks and burpees. After about twenty minutes, we rolled out the foam mats that Lars had also brought. We finally lay down, and for a moment I thought that we would get to relax – nope! Stretching was next on the agenda. The exercises were similar to those I knew from a local yoga class. While we stayed in an outstretched position, Lars explained the rough concept of fascia training. It’s often considered a supplement to actual training, and can be combined with different workouts. 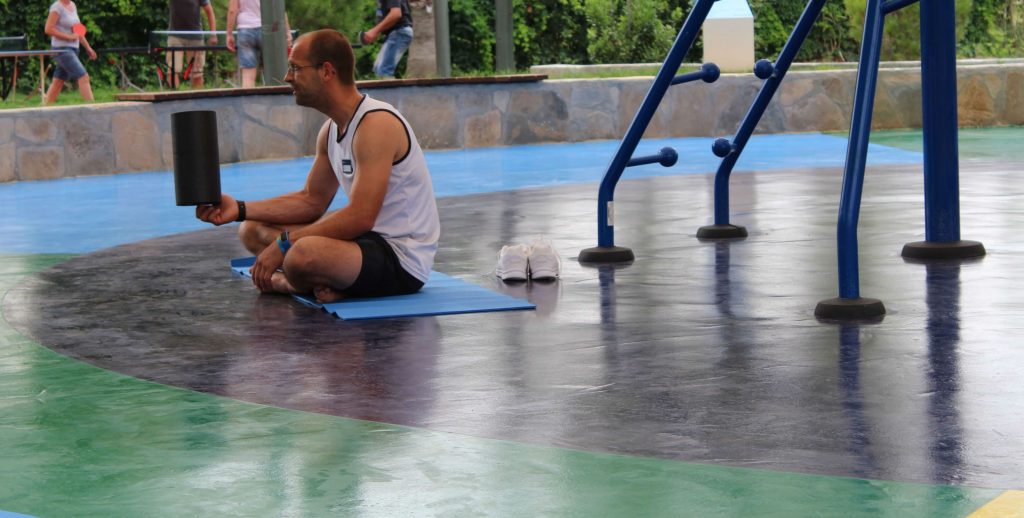 Basically, there are four main elements: resiliency, stretching, activation, and awareness. He demonstrated what each of these points meant with another exercise. Taking a water bottle in both hands, he swung it over the middle of his body from left to right. While doing so, he turned his upper body enough to make his opposite heel lift off the ground. He repeated this swinging motion several times until the movement was completely rhythmic and fluid – as if it was all a single motion. Even light jumping in all directions can achieve the fascia training effect, provided you land quietly on the balls of your feet. “Just imagine you were ninjas,” Lars said. We laughed. But it worked! The professional explained, “Your fascia is able to store and use kinetic energy – that’s why kangaroos can jump so far without much muscle strain.” He also had an explanation for the stretching exercises: “The fascia tissue is flexible, and it has to be. It connects and protects all of your organs, bones, tendons, and muscles at the same time. If your muscles are to grow, for example, through training, then the fascia needs to adapt.” I had read something like that in some of the magazines that talked about fascia training. They said that fascia is like a sponge, that under pressure or stress, it can contract and squeeze. In the opposite motion, like relaxation, new moisture could penetrate the connective tissue and return the fascia to its elastic state. That pressure can be produced with the so-called fascia rolls, or blackrolls, which were now getting introduced into our training.

“Basically, we use the rollers and balls for self-massaging,” Lars continued. Massages? Excellent! But I quickly realised that this part of fascia training was more effort than wellness. For example, I rolled laterally with my waist on the roller, and it hurt a little. But it was okay – I dealt with it; it was just on the border of bearable. As I recalled from my research, fascia could stick. This can be caused by too little movement or the wrong posture in the office – and I definitely plead guilty to these two points. So I gritted my teeth, exhaled, and tried to release my tension with the fascia roll. 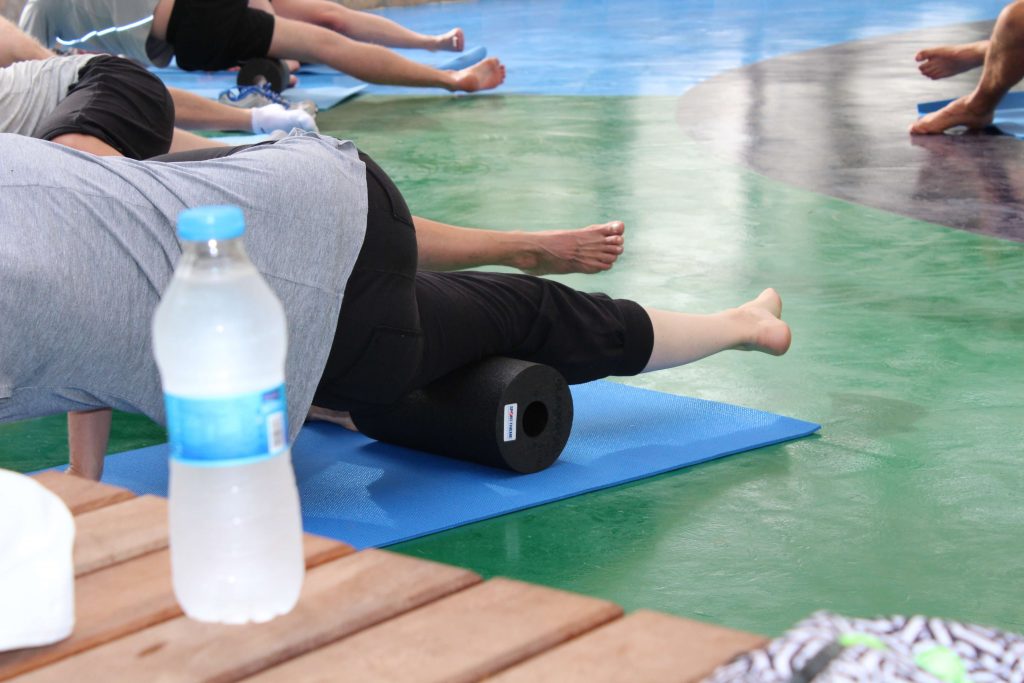 The last facet of fascia training relates to awareness. Fascia is distributed throughout the body and is the basis for our coordinated body awareness. With a further stretching exercise, we should get a feel for how tension is produced in our bodies. To do this, we stood in an upright position and lowered our head and arms toward the ground. After a short stretch, we continued in the other direction. We slowly straightened our spines with our hands reaching towards the sky. Phew, quite exhausting!

Overall, our training took an hour, and I was exhausted afterward, but I felt good – as though my whole body had been thoroughly loosened. Before the training was completely over, Lars provided us with some nutritional tips for supporting the fascia training:

My conclusion? The fascia training definitely paid off and I’ll try to integrate all this into my daily routine. For those who want to try it out, the BLUE Guides at the TUI BLUE hotels are the best. So come quickly and get in shape.