The Alps and adventure holidays – do those go together? You could say that. If you find hiking too boring, you should read on. I experienced a full day of adrenaline in the Schladming-Dachstein region. Go-karting and ziplining are the perfect combination to satisfy that need for speed.

I had never tried go-karting or ziplining. I thought they weren’t for me – that is, until I was dragged by my fellow travellers to the go-karting track at Kart-Race Schladming, which was in a parking garage across the street from our hotel, the TUI BLUE Schladming. In times of bad weather (we had fantastic summer weather the whole week!), this is the number one place to go in Schladming. My first thought was, “Doesn’t it just stink of exhaust fumes from the go-karts?” I then learned that they were electric go-karts that were recharged at a power outlet, didn’t produce exhaust, and didn’t make that awful engine noise. After a short introduction by the staff of Kart-Race Schladming, we got our equipment: a helmet with a visor and a balaclava. The balaclava made us look really dangerous, which led to us laughing and taking pictures of each other. Make sure you don’t enter a bank or participate in demonstrations looking like that.

Each participant was given a number to keep track of lap times. So if you want to measure yourself against others and think you can impress them with your driving skills, then you can see your best times (and everyone else’s) on a screen. So, enough talk! Everyone sat down in a go-kart. It felt a bit like the bumper cars at a carnival. The brake pedal was on the left, the gas was on the right. Once we were strapped in, the staff checked to make sure everything was correct and gave us final instructions. “Don’t go crazy with the gas! The go-carts can go up to 70 kilometres per hour.” Oho, that was going to be interesting. The guys in the group were quite impatient and couldn’t wait to edge each other out around the curves. We drove off one-by-one and something quickly became clear: I was slow and I drove a go-kart like it was a bumper car. Luckily, the go-kart was surrounded by a bouncy frame that absorbed impact. On the first lap, I couldn’t do the curves correctly, and ended up ramming into someone or getting rammed myself. “I’m a loser, baby…” No, I wasn’t going to embarrass myself in front of the guys. 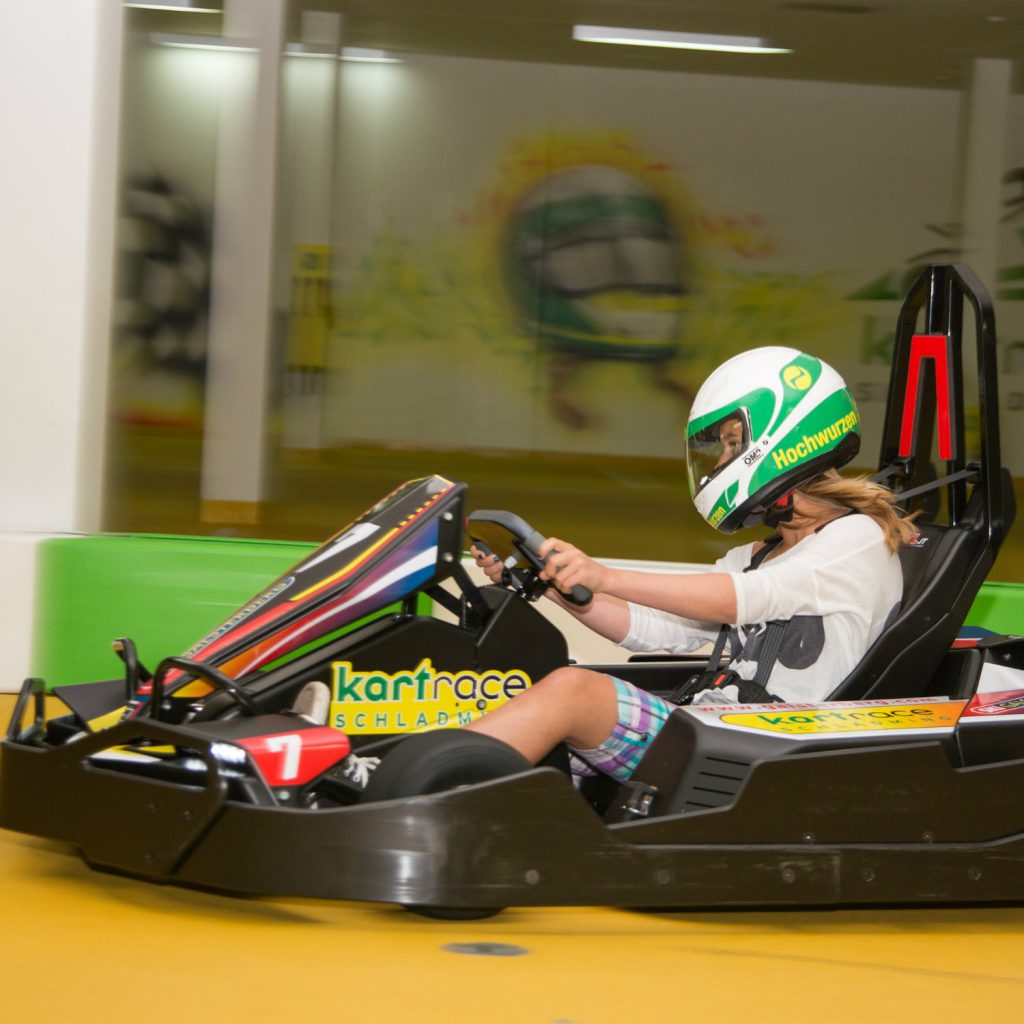 I focused on going smoothly (but slowly) into the curves and accelerating on straight stretches. Wooooohoooooooooooooooooo! That thing had mad power in it. I was pressed into the seat and barely managed to drive into the next bend without breaking the limit. The others rushed past, unimpressed, racing each other. I was getting better with each lap, getting a feel for the speed and handling. The steering was a workout for my arms! I even managed to overtake someone. Not too bad for my first time, I thought. The ride was over (just as I was starting to get the hang of it, of course) and we headed back to the charging station. Looking at the results, I saw that I came in last, which didn’t surprise me and wasn’t something to be ashamed of as a beginner. The others qualified for the next race, and when I saw how daring it was, I wasn’t sad to just sit and watch. I’m just a girl. There were crashes, a GoPro camera went flying through the air, and we had one or two sore necks. The hotel manager of the TUI BLUE Schladming won, by the way. Thankfully, he doesn’t drive a car like he drives a go-kart!

Down the Stoderzinken Zipline at 115 km/h

Was that enough adventure holidays for one day? Alas, the velocity high had just begun. We left the go-karts at Kart-Race Schladming behind and drove to Zipline Stoderzinken, about 20 kilometres from Schladming. On the journey, we were astonished again and again by the beauty of the Alps. With the landscape in the Schladming-Dachstein region, you can’t just see yourself as a thrill seeker. The idyllic scene quickly ended when I saw what awaited me. The Stoderzinken Zipline is the largest in the Alps, with a 700-metre elevation change, speeds of up to 115 kilometres per hour, and two distinct sections. What was that about my fear of heights again? I quickly suppressed the thought. With a bus, we drove with many other adventurous souls up to the zipline’s mountain station. There were also older children and elderly people there. The thing couldn’t be all that bad. In the valley, everyone got a rucksack with all the necessary equipment that would be unpacked up top. The rucksack turned into a seat with a belt system, which would be hooked into the zipline with carabiners. So we could sit and not rocket through the air like a missile. That calmed me down. Security was taken seriously there; our straps were checked several times. A scale revealed our weight with the equipment, and everyone got extra straps depending on the total weight. We had gorged on some pretty delicious Styrian food in the hotel, but were still less than 125 kilograms and could therefore use the Stoderzinken Zipline. There were many visitors on this particular hot summer day in the Styrian Alps, so you should reserve a time slot to be sure you get a spot at Zipline Stoderzinken during your holiday. A small tip: Wear a pair of sunglasses so you don’t have to worry about bugs flying into your eyes while ziplining – the headwind will also be more pleasant. The glasses won’t fly away! I tested it.

It was our turn, so we climbed a few steps up to a pedestal where we were hooked onto the zipline. Oh, that’s a long way down! I was looking into a wooded abyss. I briefly considered what my options were. Should I bail and take the bus back to the valley station? I looked at my colleague, Dirk. “Get it together! You can do this. You can scream out loud.” Well, I guess this is what adventure holidays looks like. I tried to breathe slowly and not look down. The Zipline Stoderzinken employee counted down and suddenly we were thrown out of the station. I let out a piercing scream. The first few seconds were bad, but then the adrenaline kicked in and I raced along the steel cable over a dark green fir canopy. I had never seen the Alps from this perspective. I was completely surrounded by spectacular mountain scenery. Very cool. We reached the middle station faster than I would’ve liked. This was evident on my grumpy facial expression in the photo that Zipline Stoderzinken takes for each visitor. We don’t have other pictures unfortunately, because we were afraid the camera would fly away. 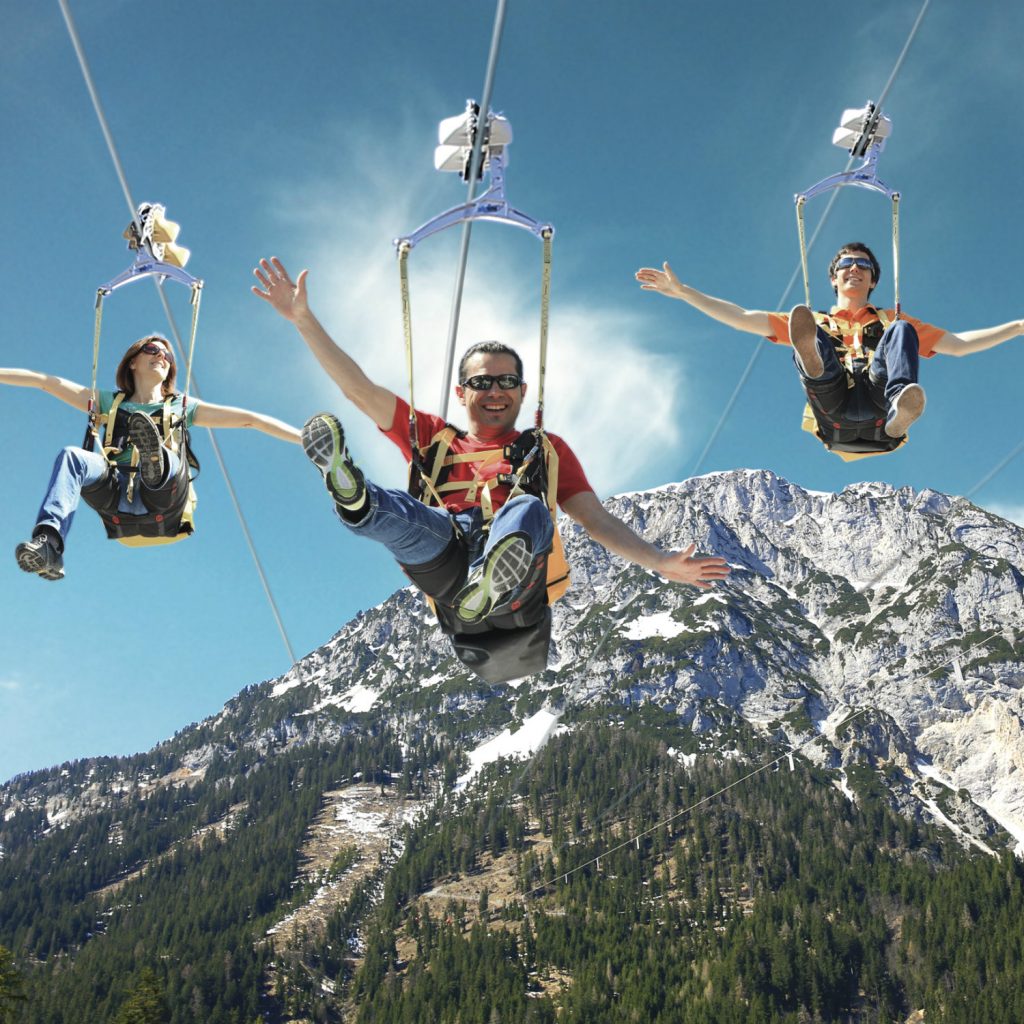 I wanted to go again! At the middle station, we switched to the second section, which had a steeper incline and promised even more speed. “Hoo, that zipline is steep,” I thought to myself as we were hurled out again. For a brief moment, I felt weightless. After the obligatory shriek, I noticed how the momentum was deforming my face and could suddenly imagine how astronauts feel during launch. It was really cool. Why hadn’t I done this sooner? The holiday is definitely the right time to try something new. Down below, we were all buzzing and full of adrenaline. Still not enough action on your adventure holidays? I recommend that all adrenaline junkies and thrill seekers in the Schladming-Dachstein region also try mountaincarting and a paragliding tandem flight. The next day, I wanted to try something calm, something for girls: llama trekking.