In September, the hustle and bustle of high summer is over and all of Europe returns to the offices and schools. If you’re on holiday now, it’s the perfect time for a holiday trip to the Mediterranean. The days are still warm and sunny, while the water is (almost) bathtub temperature after the long summer. At the same time, sporting activities are now possible again and the larger cities are filling up with cultural life. If, on the other hand, you are still looking for a classic seaside holiday, you must slowly turn your gaze to regions beyond Europe.

The best destinations in September in Europe for the active

September is one of the most beautiful months of all, when the often glaring sunlight of high summer gives way to golden, gentle rays of sunshine. You can feel how nature gradually quiets down and prepares for the upcoming autumn. If you are not averse to a good drop of wine, destinations such as the German wine regions on the Moselle, Saar and Rhine or across the border in the French Burgundy and Alsace await you in September. If you want to be active in the fresh air before the dark winter season, long hikes are just the thing. We have put together some great tips for you here:

If you want to combine hiking with lazy days on the beach, the eastern Mediterranean is a great place to go. A secret hiking tip is the Greek island of Corfu, the gateway to the Adriatic. It’s greener and shadier than the Aegean islands and is so small that you can reach all the hiking destinations from a single hotel by rental car. The most beautiful destinations:

After the hike, it’s never far to a beautiful beach where you can cool off with a refreshing dip in the sea and fortify yourself with Greek delicacies like fresh olives and feta.

The Amalfi Coast south of Naples is one of the most popular holiday destinations in Italy. The enchanting villages on the famous rocky coast are one of the most beautiful destinations in September, when the hustle and bustle of the high season has died down and the small beaches are no longer crowded. In addition, you can now hike wonderfully here and enjoy views of the deep blue sea again and again. As a reward after the tour, you can enjoy a limoncello, the speciality of the region. Our highlights:

As a bonus, you can add a hike up the famous Vesuvius. When the volcano is not rumbling, a hike to the crater rim is possible. Too boring? Then visit the Phlegraean Fields, an active supervolcano (sharing a magma chamber with Vesuvius). Here you will be accompanied on your hike by constant hissing, bubbling and rising vapours.

Hotels on the Amalfi Coast

These destinations are warm and sunny in September

Do you just want to relax on holiday and soak up the sun before the dark season? Then destinations further south are the better choice in September, for example:

Here, the thermometer regularly reaches 30 degrees. You can use cooler days to visit sights or for relaxed shopping, for example in the famous souks of the island capital Houmt Souk on Djerba.

City breaks with a pinch of exoticism

An alternative to beach holidays are city breaks to southern climes, for example to the Turkish metropolis of Istanbul or the two fascinatingly contrasting cities of Jerusalem and Tel Aviv in Israel. One of the most recommended destinations for September is the legendary Marrakech in the heart of Morocco. The sweltering heat of summer is over, so sightseeing is fun again. At the same time, it’s warm enough to spend an afternoon lounging by the hotel pool and soaking up the sun. Our highlights in Marrakech:

Our tip: Plan two or three more days, because many other great destinations in Morocco can be visited on a day trip. These include the famous seaside resort of Agadir on the Atlantic and the port city of Essaouira, which (like Marrakech) is a UNESCO World Heritage Site. Ouarzazate and Aït-Ben-Haddou in the Atlas Mountains have become a Mecca for film fans, having been used as locations for famous films such as Lawrence of Arabia, Gladiator, Alexander and the cult series Game of Thrones.

The most beautiful destinations in September for a long-distance trip

Are you looking for more distant destinations for September that promise the best bathing weather and offer cultural highlights? Now that the summer heat has died down, Egypt is once again worth a trip. On the Red Sea, famous resorts like Hurghada and Sharm-El-Sheik await you with luxurious resorts, endless beaches and extensive water sports. The Red Sea itself is known for its great diving spots. If you don’t just want to lie on the beach, you can combine your stay at one of the beach resorts with a Nile cruise that takes you to the most beautiful sites of ancient Egypt.

Luxor and the Valley of the Kings can also be done as a day trip from Hurghada. However, you have to get up early, because the trip takes five hours and you leave at 4.30 or 5.00 am. If you’re an absolute diehard, you can even book an organised day trip to Cairo and the pyramids of Giza. Here you leave at 1.00 or 2.00 a.m. so that you are in the capital in the morning. The return to the hotel is around 10 pm.

Do you want to go even further afield? The idyllic dream islands in the Indian Ocean such as Mauritius, Zanzibar and the Seychelles are also great destinations in September, because here it is dry, wonderfully warm and not so crowded outside the high season. Absolute dream beaches are also waiting for you here!

Which destinations are cheap in September?

With the end of the high season, prices fall in many regions of Europe – an absolute advantage for budget travellers. Portugal and northern Spain in particular are destinations with savings potential in September, as the bathing season is almost over here. Some of the most beautiful destinations for September in this region:

With a bit of luck, you will still be able to enjoy warm beach days here, but a jacket should not be missing from your holiday luggage!

Adults-only hotel at the Algarve

Time for a break!

Sunshine on the beach, exciting cities or physical activity on a hike? Which of the many great destinations in September will you choose? 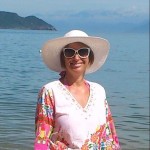