As we turned into an inconspicuous residential area between Djerba’s main town of Houmt Souk and the hotel zone, I was skeptical. Did an artist really live here behind these high walls, and was his house really one of the main attractions here? But there he stood, already grinning in the entrance gate, the artist Jilani, whose studio “Dar Jilani” is the number one art stop on Djerba. The tanned and cheerful Tunisian took us down to the studio, located in the basement. The reason the studio is almost in the basement becomes clear when you realise that the summers on Djerba can reach temperatures of 45 degrees. Dar Jilani means nothing more than “Jilani’s house”. Jilani led us into a reception room resplendent in traditional Tunisian decor: colourful cushions were grouped around a half-height table, which was set with sweetened mint tea, pastries, and dates. 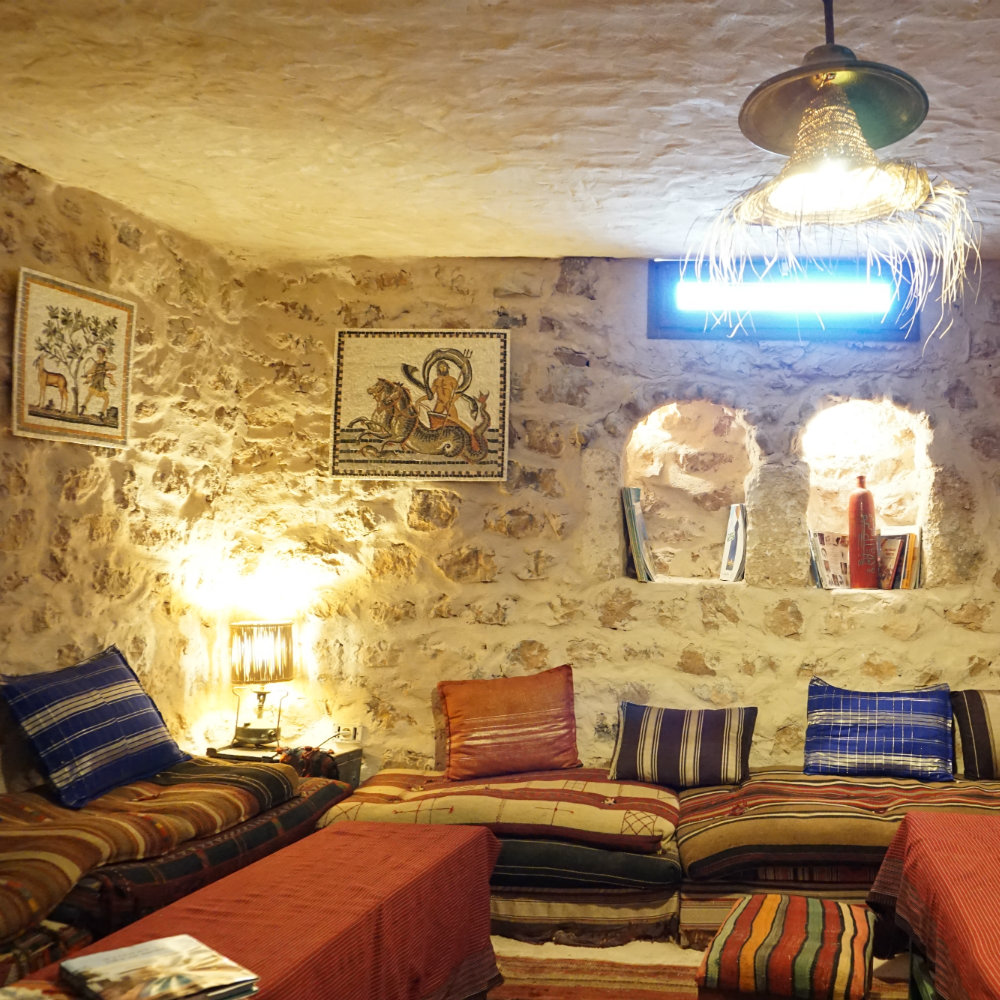 Jilani – a man of the world

I had imagined an artist on Djerba differently. With crazy hair and a paint-stained smock. In fact, Jilani is more of a Tunisian George Clooney in his blue shirt and gray hair, suntan, and bright eyes. He would also fit well as a bon vivant on a yacht in St. Tropez. But he’s an artist through and through. In 2012, he rebuilt his house to be a workshop and studio after living in Italy for years. His Italian wife followed him to Djerba. Jilani explained to us in English and a little bit of German (besides, of course, he’s also fluent in Arabic and Italian), how he has fulfilled a lifelong dream with Dar Jilani. Here, he not only creates and exhibits his works, but also those of twelve other local artists. Sometimes he organises workshops with the other Tunisian artists, where visitors can not only watch how the artists paint, tinker, or sculpt, but can also take part themselves. It’s neither cerebral abstract art nor consumer kitsch. Instead, the local artists take inspiration from Djerba and its materials and colours. To see the fruits of that labour, we headed to the studio, where a chat and sweet refreshments awaited us. 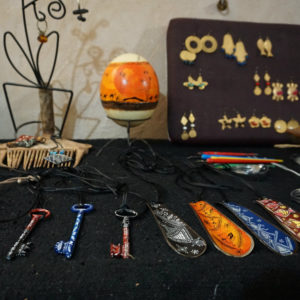 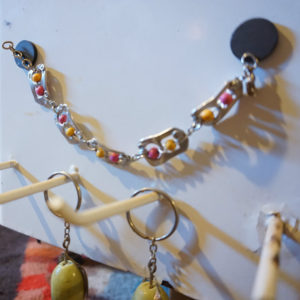 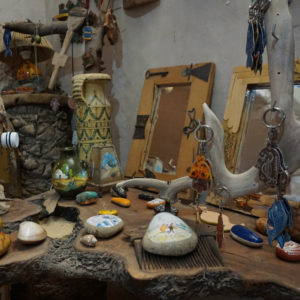 The tour guide at the TUI BLUE Palm Beach Palace – our accommodation – had described Dar Jilani as one of the highlights of Djerba. And he did not over-promise. The studio is a large room full of colourful large and small works of art, displayed between everyday village objects. The Tunisian Minister of Arts and Culture and the Syrian writer Adonis were present at the opening, and Jilani is well-known all over Djerba. Dar Jilani is a mix of an art exhibit, a museum of local history, a workshop, and a colourful wonderland. I wasn’t sure where to look first. Jilani led us through the exhibition and explained the story behind individual art objects. Many pieces were converted flotsam, and only at second glance could you see that this necklace (for example) was made of can closures. Upcycling at its finest wherever I looked: earrings from bottle caps or plastic spoons, necklaces with a brooch from the tape drive of a good old music cassette, leather ribbons with painted shells as pendants, pebbles with typical Tunisian ornaments, or brilliant everyday scenes painted of Djerba – no material was safe from Jilani’s art. I found the old keys, which were formerly used for the traditional wooden doors of the island, particularly original in their design, as they had been intricately and colourfully painted and strung on a cord to create unique necklaces. Women will also be glad to find handmade bags here, even for smartphones.

Anything lying around Djerba that has outworn its intended use undergoes a creative transformation at the hands of the Dar Jilani artists, who often keep their creations practical. Thus, an old straw hat becomes a lampshade, a discarded computer monitor becomes an unusual picture frame, a painted palm frond is barely recognisable as such. The most exciting to me were the boards decorated with a single feather, which was itself painted with artful designs. Simple and yet so extraordinary! Jilani led us to a corner where there was a big loom. A half-finished, colourful rug gave us an idea of ​​how labourious the work of the women, who actually weave carpets by hand on Djerba, must be. But soon, large-scale paintings in a corner of Dar Jilani attracted all the attention: Old wooden doors painted with intense colours and expressive female faces. The mysterious veiled women cast a spell over us. Wooden benches painted with everyday scenes from Djerba, watercolours with representations of small oases, and paintings large and small adorned canvases. The pieces exhibited in Dar Jilani were more beautiful and original than many things I’d seen in the tourist markets on Djerba, and for fair, fixed prices.

But what makes Jilani so special, to be the lord of art galleries? We sat down on a bench in the middle of the Dar Jilani studio to find out. The artist sat in front of us, surrounded by painting utensils such as brushes, paint tubes, and, of course, some pictures portraying these beautiful, strong women again. Next came his specialty. On a small mirror, he painted a favourite motif at lightning speed. Before I even understood what was happening, he was already asking me what I like: “Desert or sea?” As a big fan of seaside sunsets, I immediately blurted “sea!” as my answer. As soon as I said it, he daubed his fingers into the colour palette and wiped them across the mirror in seconds – so fast I couldn’t see how he created a scene with sea, sandy beach, and red sunset sky. As if he could do magic. We were baffled and all that escaped us was “ah” and “oh”. “Would you like to take the picture with you?” Yes, of course! He quickly painted a figure looking out over the sea and two ships on the horizon. “What is still missing?” Of course, the obligatory camel that runs across the Djerba beaches. So spoken, so painted. He then added my name in Arabic down in the corner, and thus, my unique Dar Jilani original is finished. The whole thing did not even last a minute. Jilani grinned widely as he presented us his artwork. 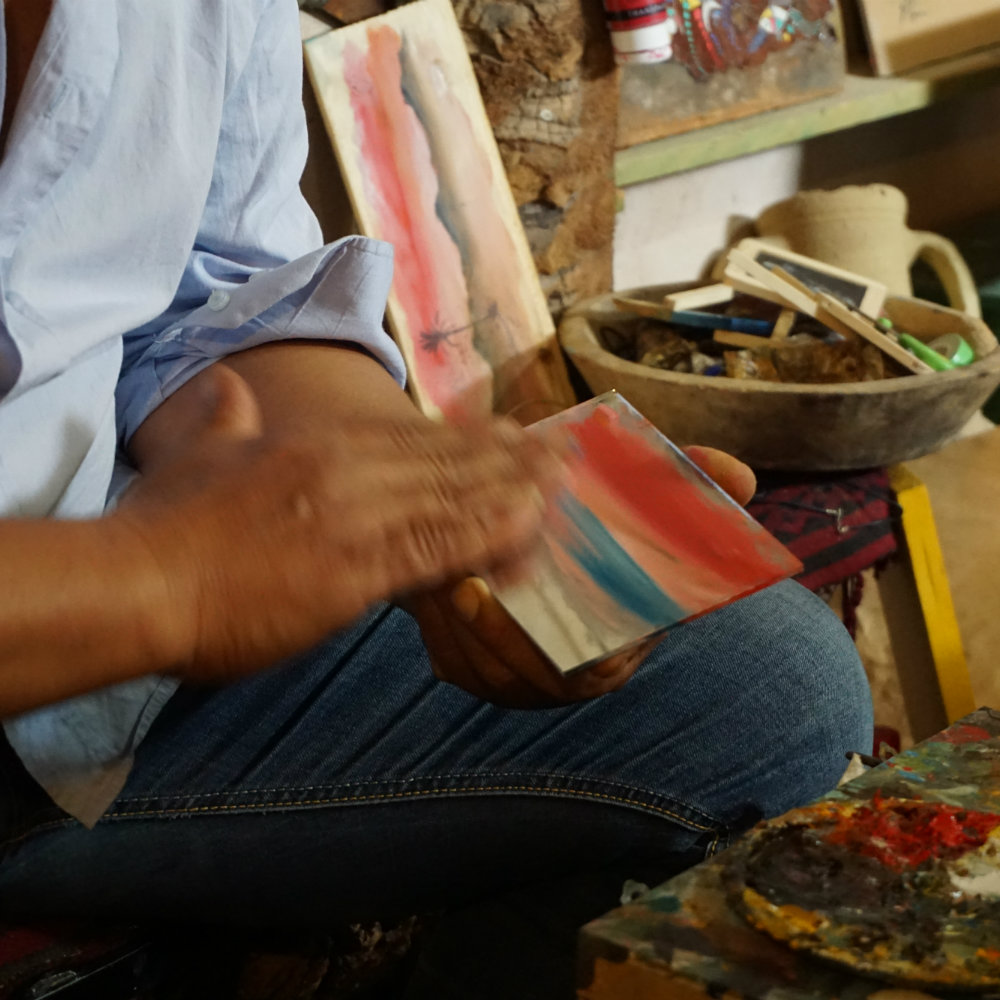 In just a few steps, Jilani transformed a simple mirror … 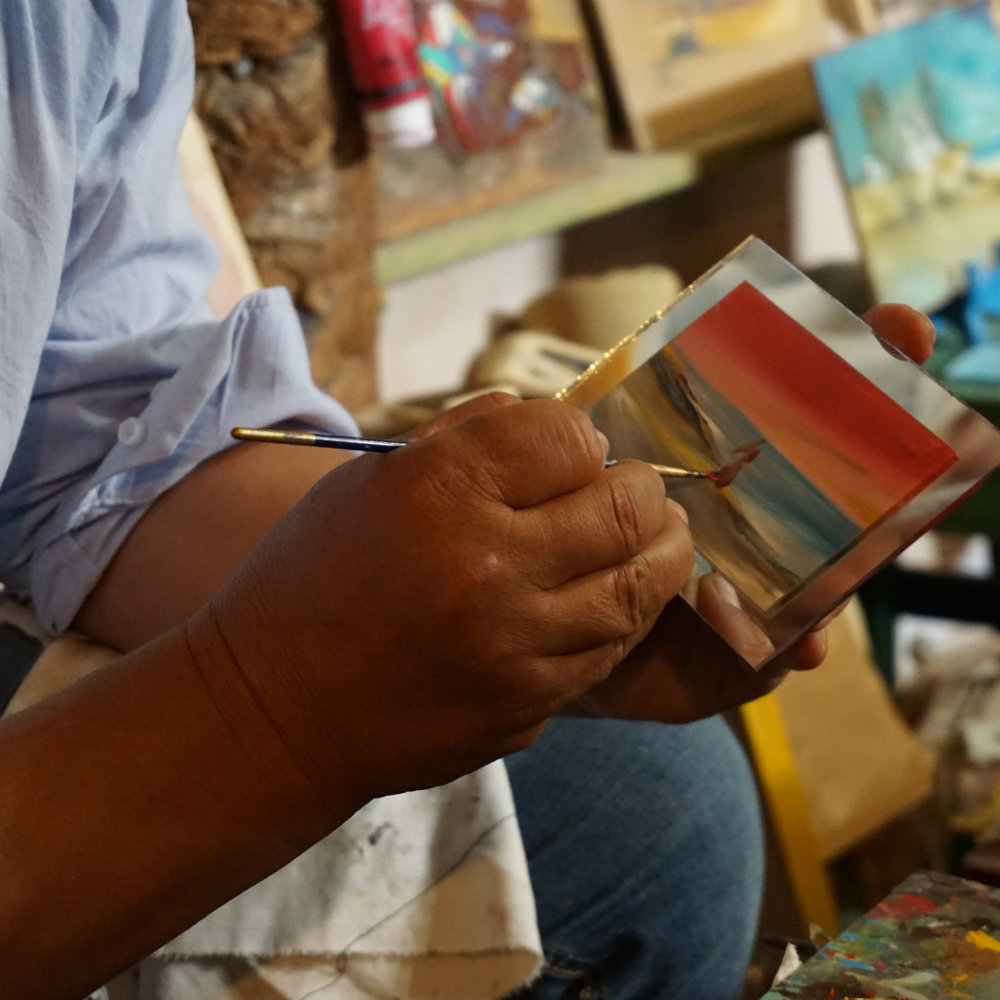 … into a colourful artwork!

The perfect souvenir from Dar Jilani

My colleague Dirk received a longing desert painting with a palm tree, and, even on the second time, our eyes couldn’t manage to follow Jilani’s nimble, painting fingers. We were seriously impressed, and appreciated the souvenirs. The painted mirrors received a covering, so that the paint would not smear, and were packed securely to travel home with us. The paint takes three days to dry fully. But how did Jilani manage to keep from covering himself with paint? That, too, remained a mystery to me. 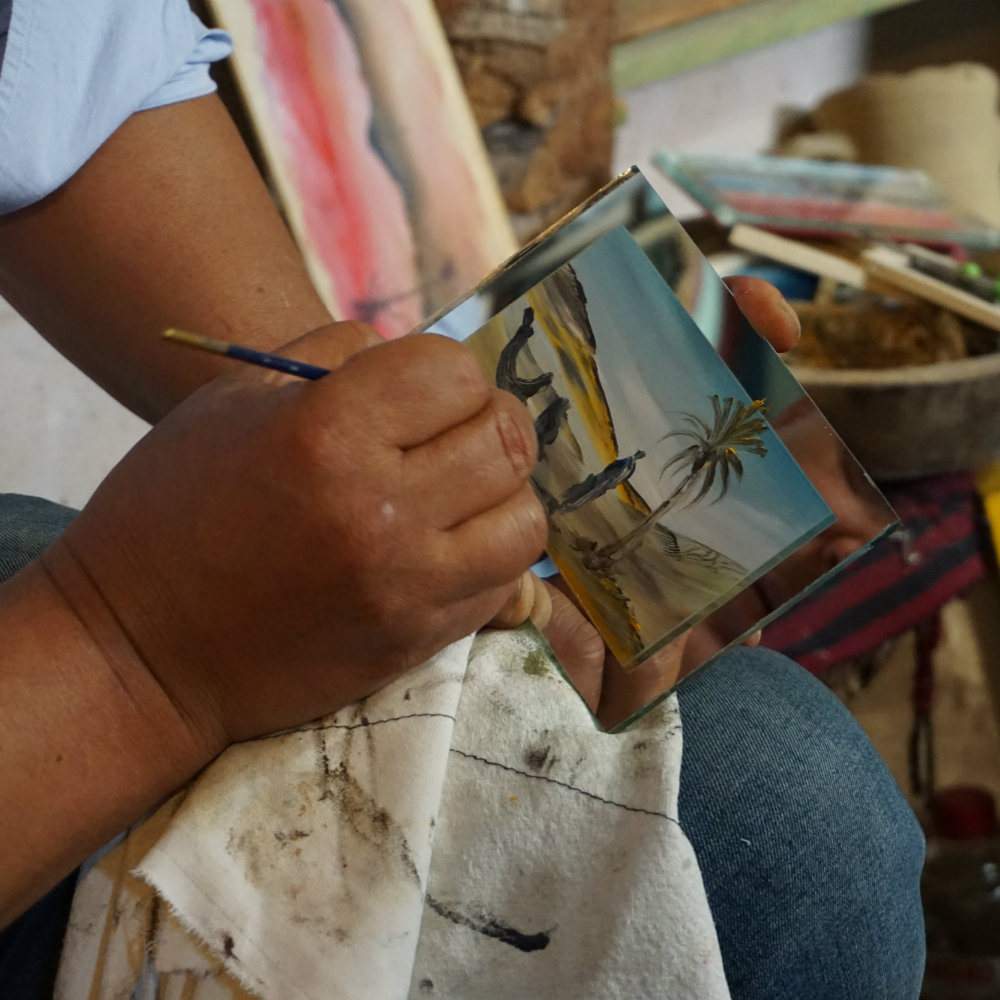 Dirk decided on the desert motif: Jilani conjured this, too, at lightning speed

Very happy thanks to this experience, we climbed up from the underground Dar Jilani studio back into the courtyard. The large open space of the courtyard was decorated with plush, shaded chairs and clay amphoras. The aforementioned open-air workshops with other artists take place here, and under the direction of the Tunisian and his Italian wife, visitors can learn to cook Tunisian specialties in cooking classes at Dar Jilani. The guests then sit together in the cosy outdoor lounge and enjoy their meal. Jilani also informed us that he has adopted school sponsorships, brings local school classes his studio, and invites students to explore their curiosity about local handicrafts. Before we said goodbye to Dar Jilani, we admired the thick purple olives on a nearby tree. “Try it!” laughed Jilani mischievously as he handed us an olive. It tasted terribly bitter, just awful. We made a face and laughed. Note: only eat pickled olives. Jilani is just an original. Do not miss Dar Jilani on Djerba. There is art and entertainment by (and with) the artist personally. 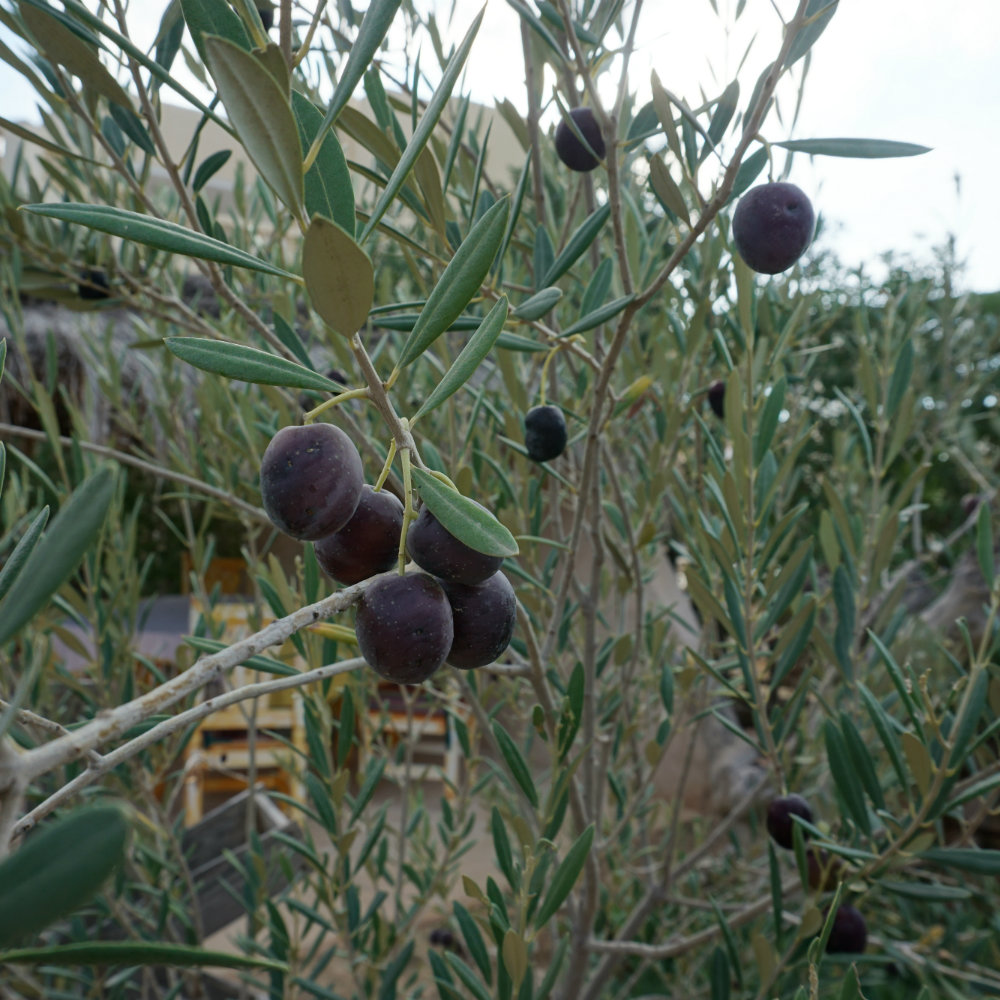 Better when not eaten raw: olives in the garden of Dar Jilani 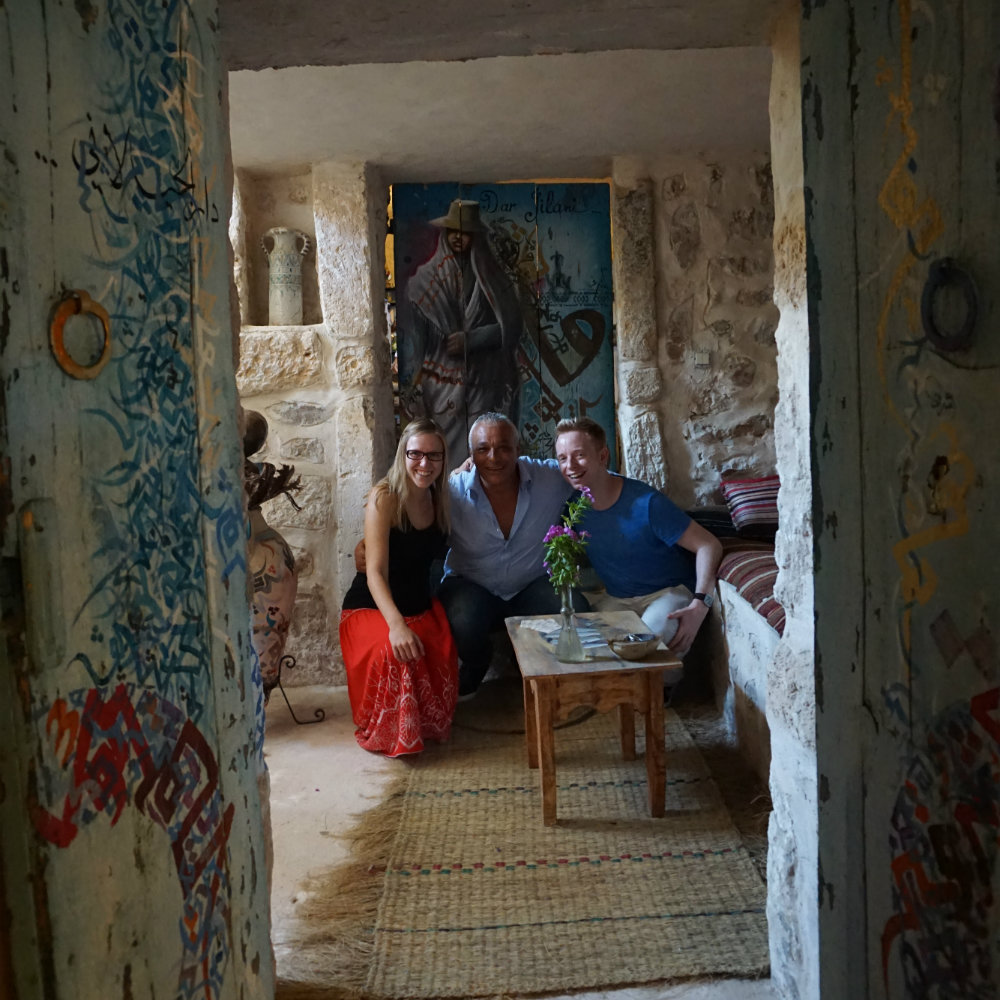 Info: Our hotel TUI BLUE Palm Beach Palace organised the visit for us. Jilani is so well known on Djerba that probably everyone there knows him. The address of Dar Jilani is “Km 3 Route Touristique Houmet Essouk”. There is a signpost at the junction on the main road. If you are still looking for a great hotel for your Djerba holiday, I can highly recommend the nearby TUI BLUE Palm Beach Palace.