I feel the need – the need for speed! It seems I’ve become a full-throttle specialist for TUI BLUE. Whether racing down the Alps on a tricycle or four-wheeling through the mountains of Mallorca, the main thing is to go fast and (mostly) off-road. On Djerba, I stayed true to myself and dared to attempt the next unknown adventure: a dune buggy tour. These brutal-looking vehicles immediately make me think of the final episode of Mad Max with Mel Gibson. The angry motor in the back, protected only by a minimalist roll cage while the hot desert sand whips you in the face – awesome! 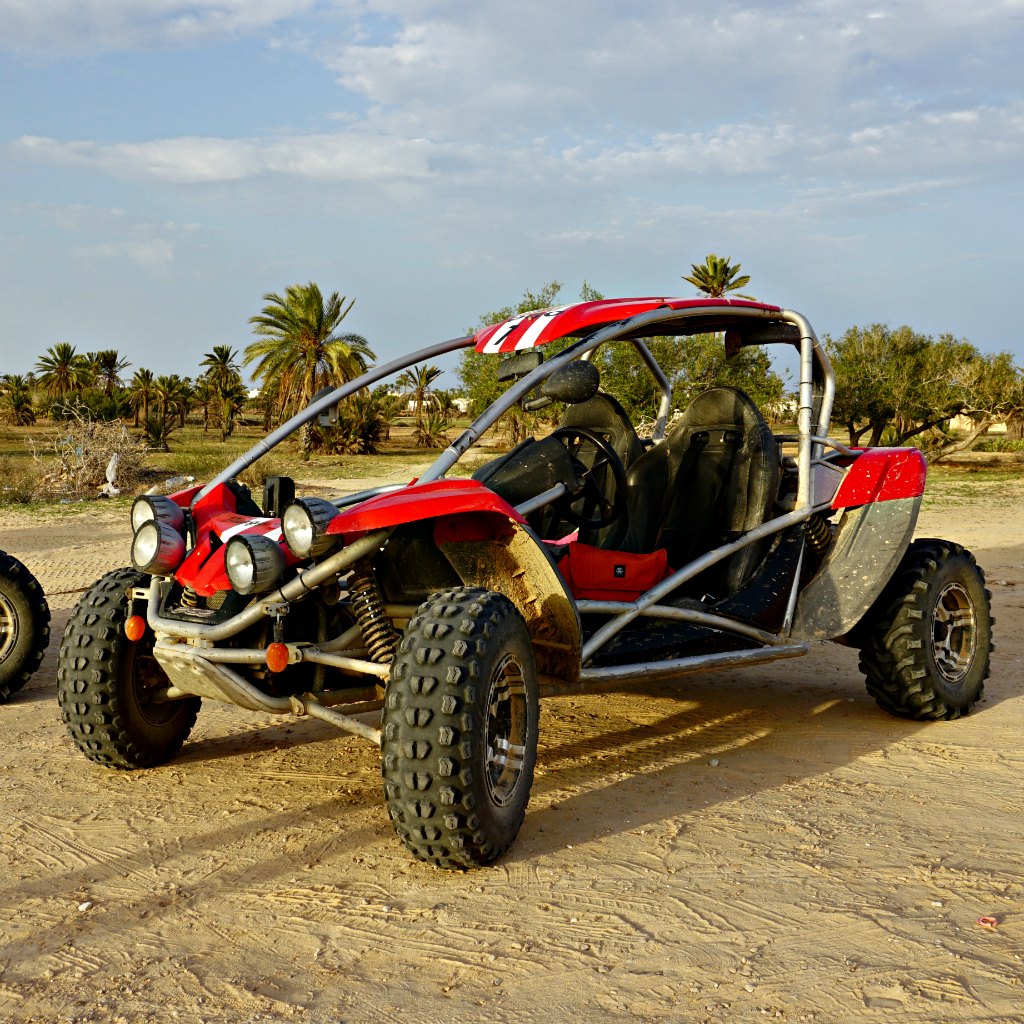 This car has taken my heart by storm

With the anarchy stripes in the back of my head, my faithful travel companion Miri and I made our way from the TUI BLUE Palm Beach Palace to the “buggy headquarters” a few kilometres away. We had booked the tour directly with the tour guide at the hotel, so we didn’t have to worry about anything else. We drove over in a minivan and I excitedly spotted the fiery-red desert companions from a distance. They were lined up next to quad bikes and other off-roaders. The petrol count in my blood shot up suddenly.

Even though it was already October, the sun was burning down from high in the sky and I didn’t want to leave the pleasantly cool van. As soon as we disembarked, we were greeted by our “racing director” for the afternoon: Muhammed. Mohammed appeared to be in his early to mid-twenties with wild, curly hair. The fire in his eyes showed that he was looking forward to the trip together. The young Djerbi briefly explained the vehicle – gas on the right, brake on the left, everything above the steering wheel, the rest running automatically – and then we got to it without any further ado. Mohammed drove ahead and we followed – so started the dune buggy tour. 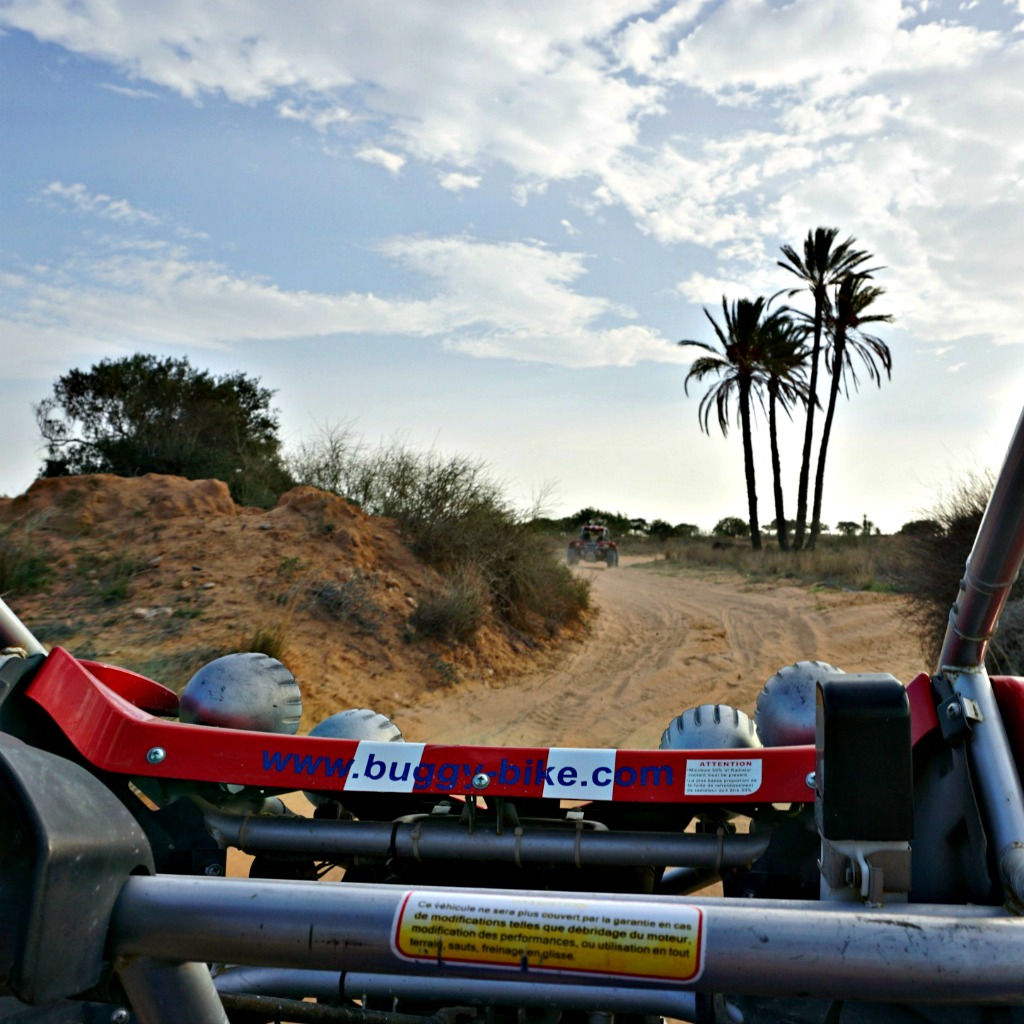 Always in sight: Mohammed the Guide

After a short stretch on asphalt, we turned right and left the paved roads. Inside the island of Djerba, there are few paved roads. And so the buggy tour led us over sandy slopes past palms, camels, and sometimes abandoned farmhouses. There it was, that Mad Max feeling! In front of me, Mohammed drifted daringly through the curves. He probably knew the track like the back of his hand and could thread a needle with his buggy. 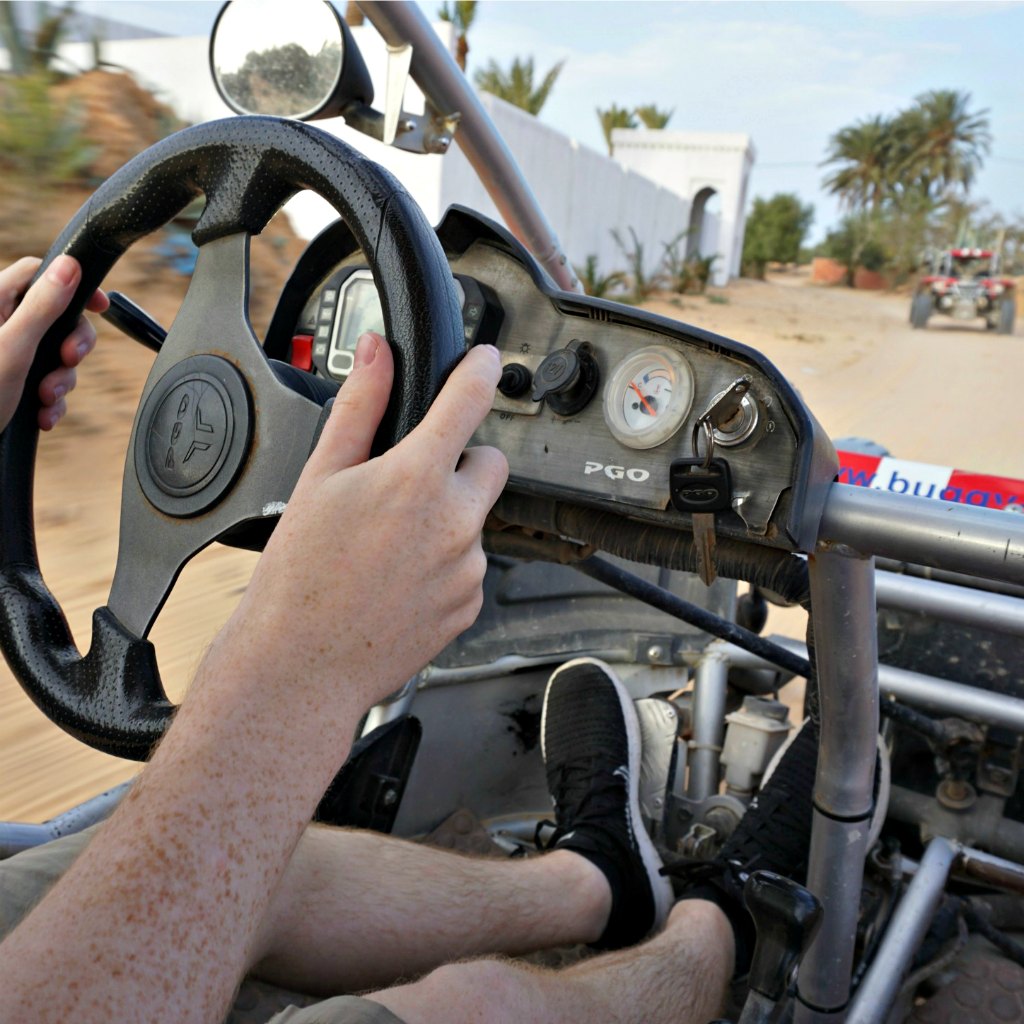 There’s only one speed: full throttle!

I needed a bit of time to familiarise myself with the buggy and its handling, but after a short time of getting used to it, I was on our guide’s tail, creating clouds of dust around the curves. Beside me was my co-pilot Miri, whose occasional screams sounded like a mixture of joy and terror. She clutched the frame of the vehicle, sometimes raising her camera and trying to capture the scene as best she could. I had already adjusted to the pure joy of driving.

After about 45 minutes, which flew by, we took a break in a small village and enjoyed a refreshing, local Djerbian peppermint tea with Mohammed. He asked me how I liked the buggy tour. I answered him, but I’m sure he could read the enthusiasm on my face. Even my pale face, which had only been protected by a pair of sunglasses, got some colour from the sand and dust kicked up by the car in front of me. But what the heck? Better to kick up the dust than let it collect! Mohammed thought so too, and we continued our buggy tour together. 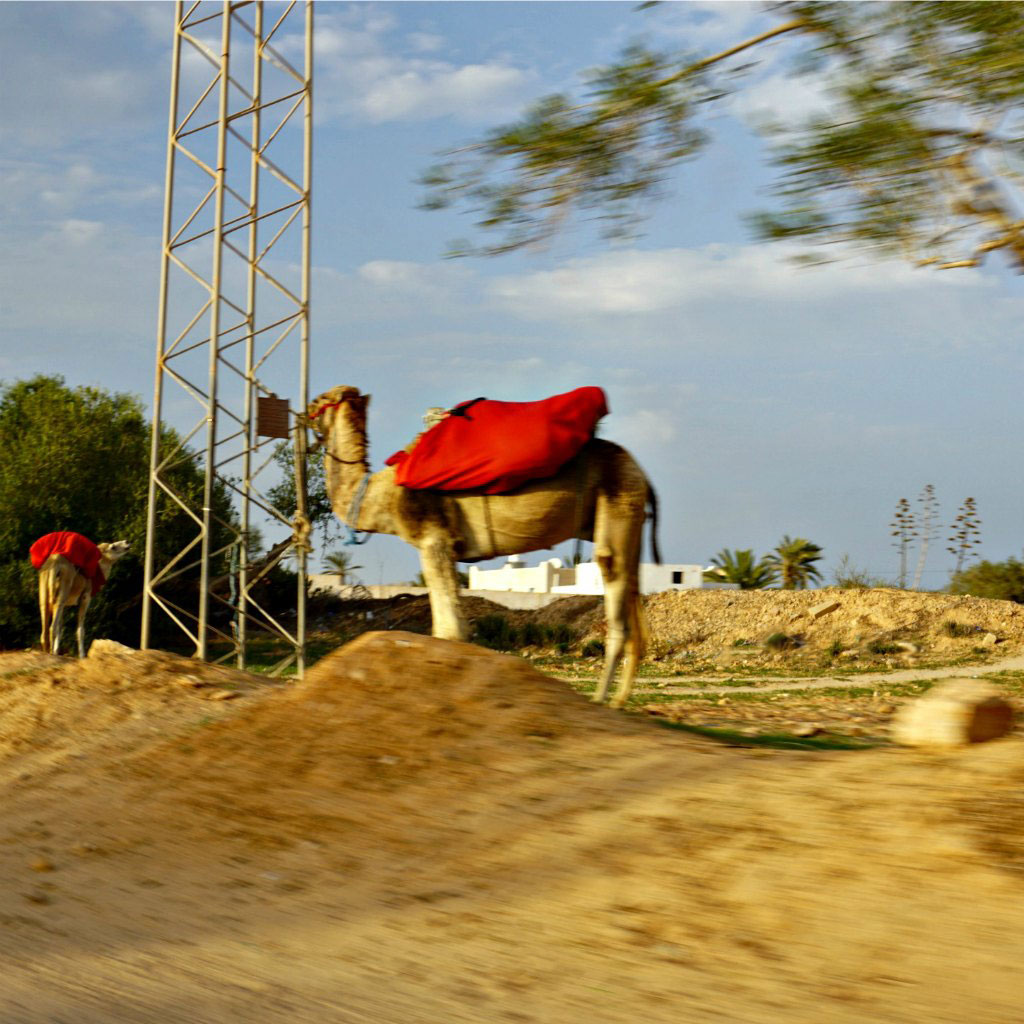 Passing camels is an everyday occurrence on Djerba

We drove from the island’s interior back to the coast and – after a brief stint on solid pavement – went off-road again. In front of us stretched a flat, sandy plain reaching almost to the horizon. In the distance, I recognised the shallow dunes of Flamingo Island. Almost all year round, the pink flamingos, which are otherwise only seen in zoos, can be found here – though I couldn’t make out any today. That wasn’t a bad thing, because I needed to focus on driving. The dune buggy tour reached its climax here. On the open area, I could press the gas pedal to the floor, the wind whipped me in the face at almost 90 kilometres an hour, and looking to the left revealed a picture-perfect sunset – that’s what freedom feels like! 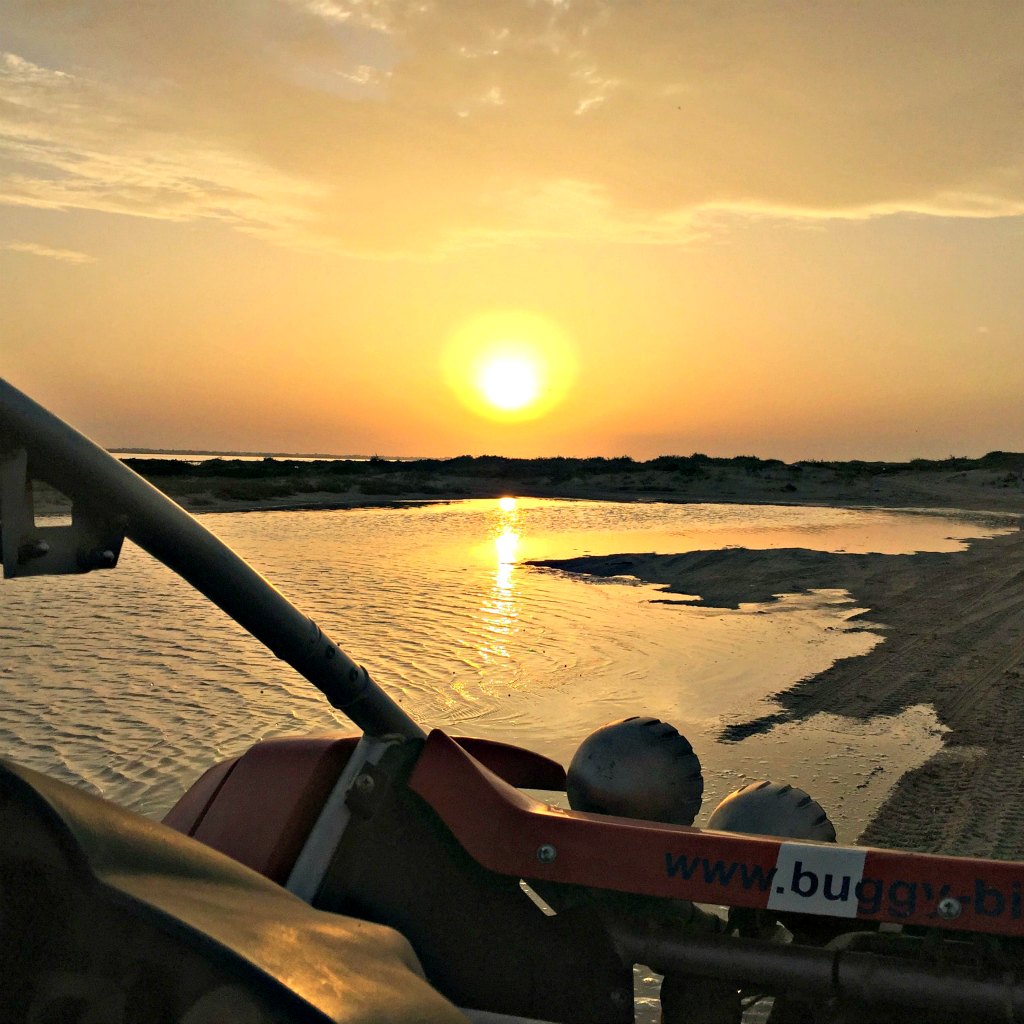 Freedom and the pure thrill of driving

Euphoric, Mohammed and I drifted through Djerba’s dunes and stopped in the middle of the sandy climes for a last souvenir photo with the setting sun in the background. Now, unfortunately, it was time for the drive home. I tried to get the most out of the last stretch and fully enjoy the last minutes of the dune buggy tour. Beaming, sporting some wild hair, and covered all over with sand, we arrived back at our starting point and – with a heavy heart – I had to say goodbye to our beloved red racer. The minivan drove Miri and me, grinning, back to the hotel.  Finally, I washed the desert sand off my skin while listening to the melody of “Dune Buggy” from the Bud Spencer & Terrence Hill classic film “Watch Out, We’re Mad!” and realised that this was definitely not my last dune buggy tour!