Going by Vespa through Tuscany – pretty cliche. I could just as well have taken the Harley through Calabria. But I wanted to experience the Italian lifestyle on the Vespa in the yearning Italian landscape of Tuscany. At the Hotel Il Castelfalfi, I heard about the possibility to ride from San Gimignano through the hilly landscape of Tuscany on a Vespa. First decision: Just rent the Vespa and drive alone or do a guided tour? I opt for a guided tour and I’ll tell you why it’s the smarter decision in some cases. 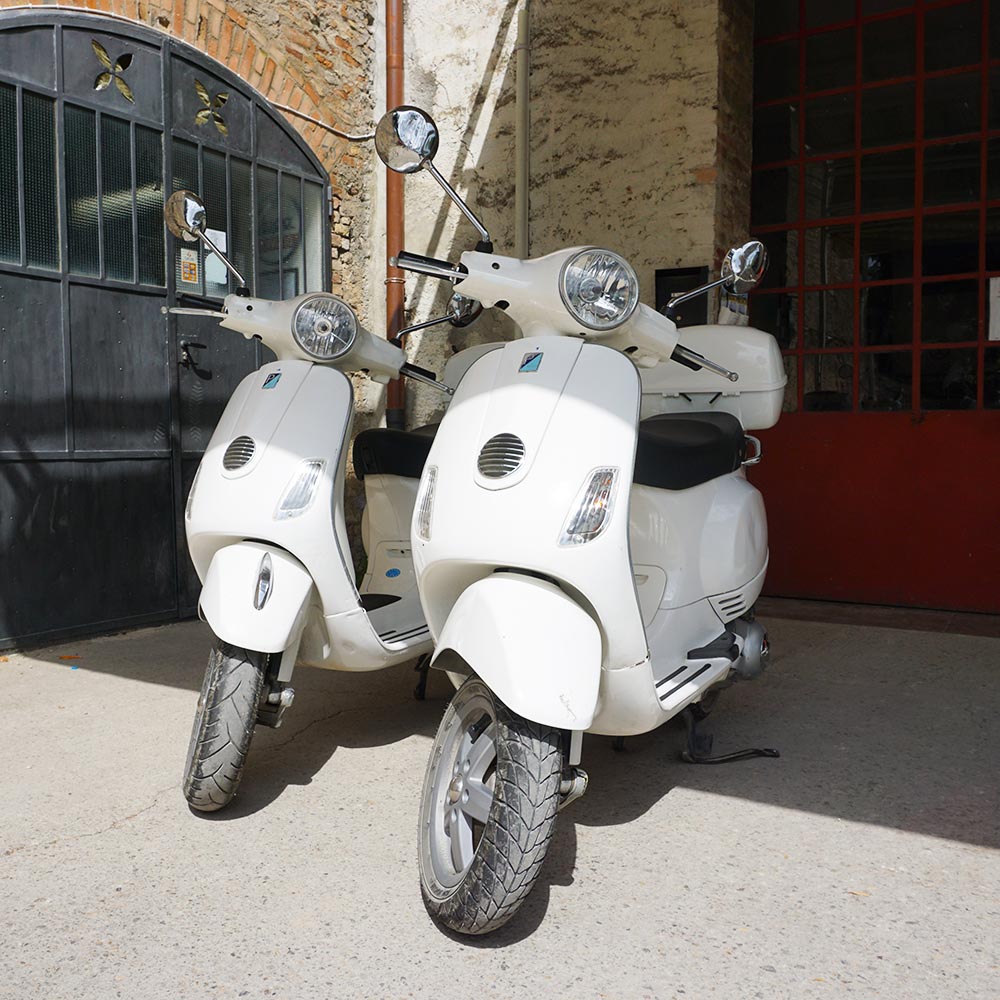 The Italian Vespa is one of the world’s most famous scooters.

On to San Gimignano

I chose the route “Volterra Ring” offered by the Vespa rental company Bellini in San Gimignano. From the beautiful San Gimignano, it goes to Volterra, an equally authentic town nestled in the Tuscan hills, and on a different route back to the starting point. A total Vespa tour of 60 kilometres, filled with photo stops, a city tour, and the Italian dolce vita in Volterra. I’m welcomed at the Vespa rental by Dimitri, who explains the details in very good English. And now comes the second decision: drive myself or ride behind Dimitri?

Drive or ride the Vespa?

Dimitri tells me about tourists who vastly overestimated their driving skills and paid for it with a stay in the hospital. This happens practically every season. “You have to be an experienced and safe driver. There are many tight corners and if you take them too fast, you can go sliding. ” Considering the infamous driving style of the Italians and my own scooter accident in Thailand, I opt for the ride option on the Tuscany-Vespa tour. 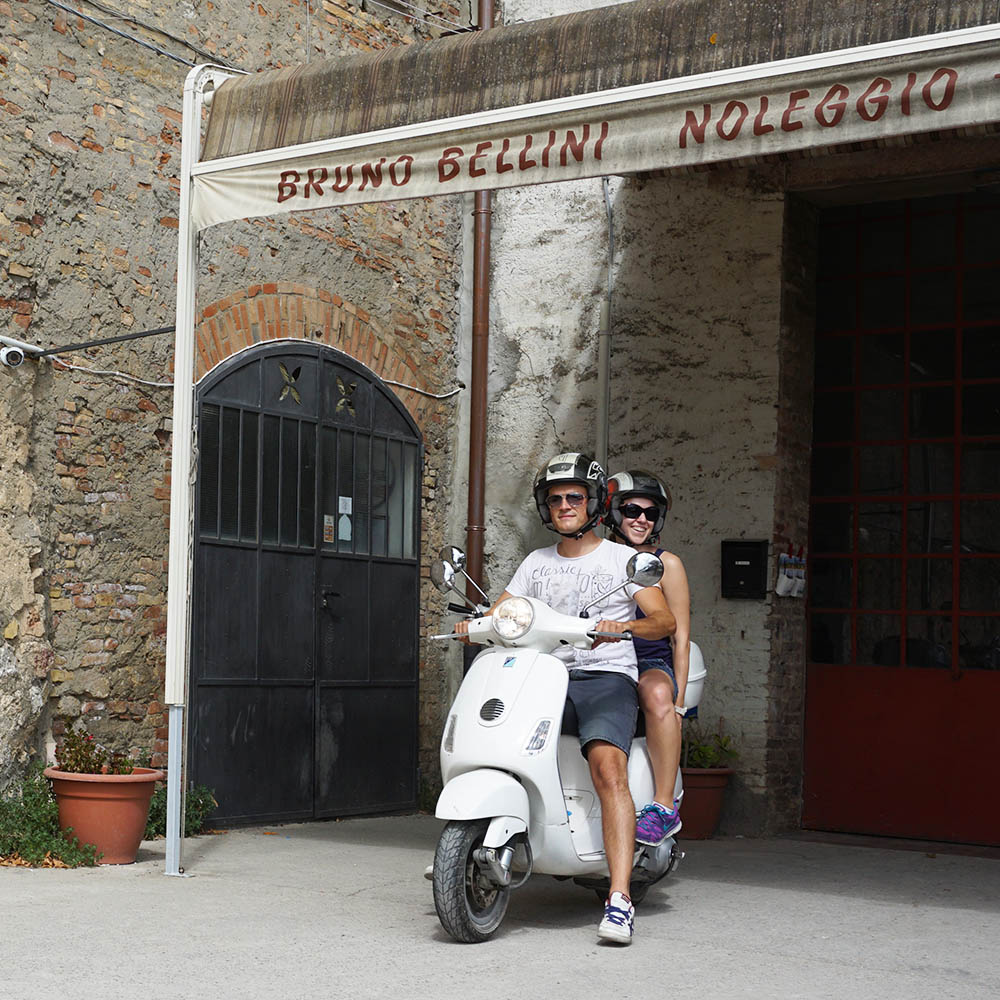 Decision made: Instead of driving myself, I let Dimitri drive me through Tuscany.

Helmet on, hold on tight, and let’s go!

The white Vespa we’re zipping around on looks like something from a promotional brochure. No wonder this beautiful scooter stands for a lifestyle. I have the choice of holding onto Dimitri or clinging to two side brackets. Since Dimitri isn’t some bel ragazzo who picked me up with “ciao bella” calls on the road for a spontaneous ride, I cling to the brackets at the back of the seat. Of course, I can’t forget the helmet. We roar off, and I soon realise that a short skirt is a really bad outfit for a Vespa tour. Oh well, the drivers are happy. 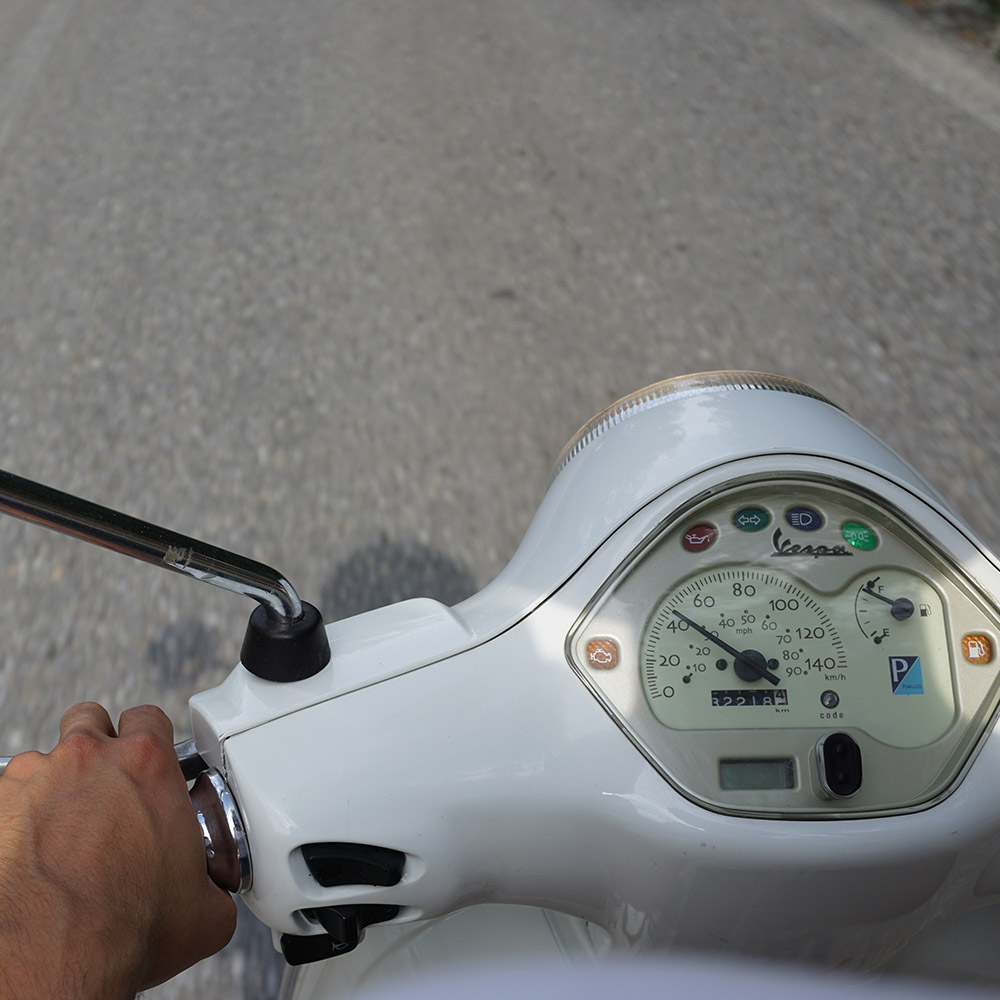 Our Karacho speedometer: we ride the Vespa through Tuscany at a decent pace.

Just past the town, we stop at a lookout and see why San Gimignano is called the Manhattan of the Middle Ages. The small town in central Tuscany is dominated by many towers and is unmistakable from a distance. Incidentally, the hike to San Gimignano is one of my insider tips in Tuscany. It’s warm, but overcast. I enjoy the warm air and Dimitri’s safe driving. Quite relaxed, I take in the unique landscape on the Vespa tour through Tuscany: olive groves dotting the rolling hills, quaint stone houses with cypress avenues, harmonious vineyards, and extensive golden wheat fields. Tuscany like something from a picture book. 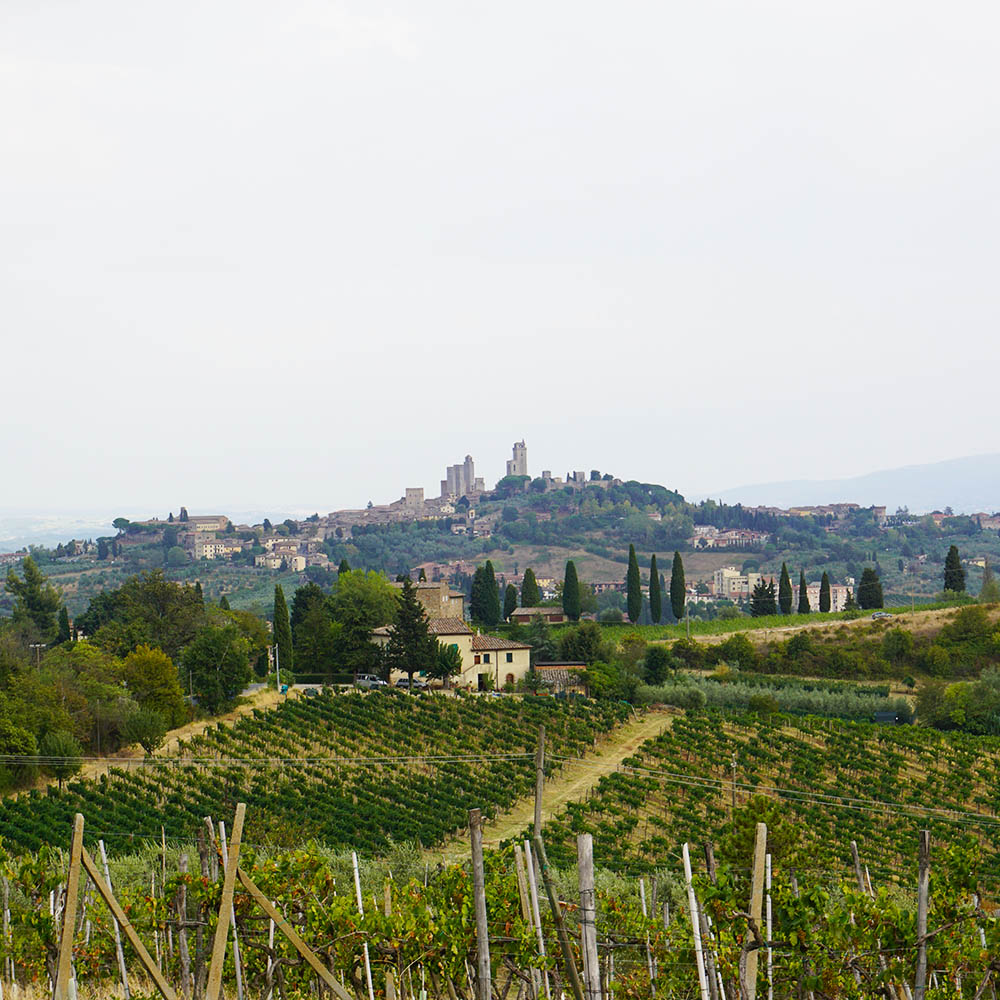 The Manhattan of the Middle Ages: the “skyline” of San Gimignano is unmistakable.

The bends on the roads are really tough and some oncoming drivers are dangerously cutting the curve. It rains briefly and the road is wet. I’m glad that Dimitri is controlling the Vespa so that I can take pictures and have a look around during the Vespa tour through Tuscany. Before we reach the mountain on which Volterra sits, we stop at a huge red steel ring, the “Anello di San Martino”. The landmark of Volterra, created by local artist Mauro Staccioli, acts as a portal to another dimension. 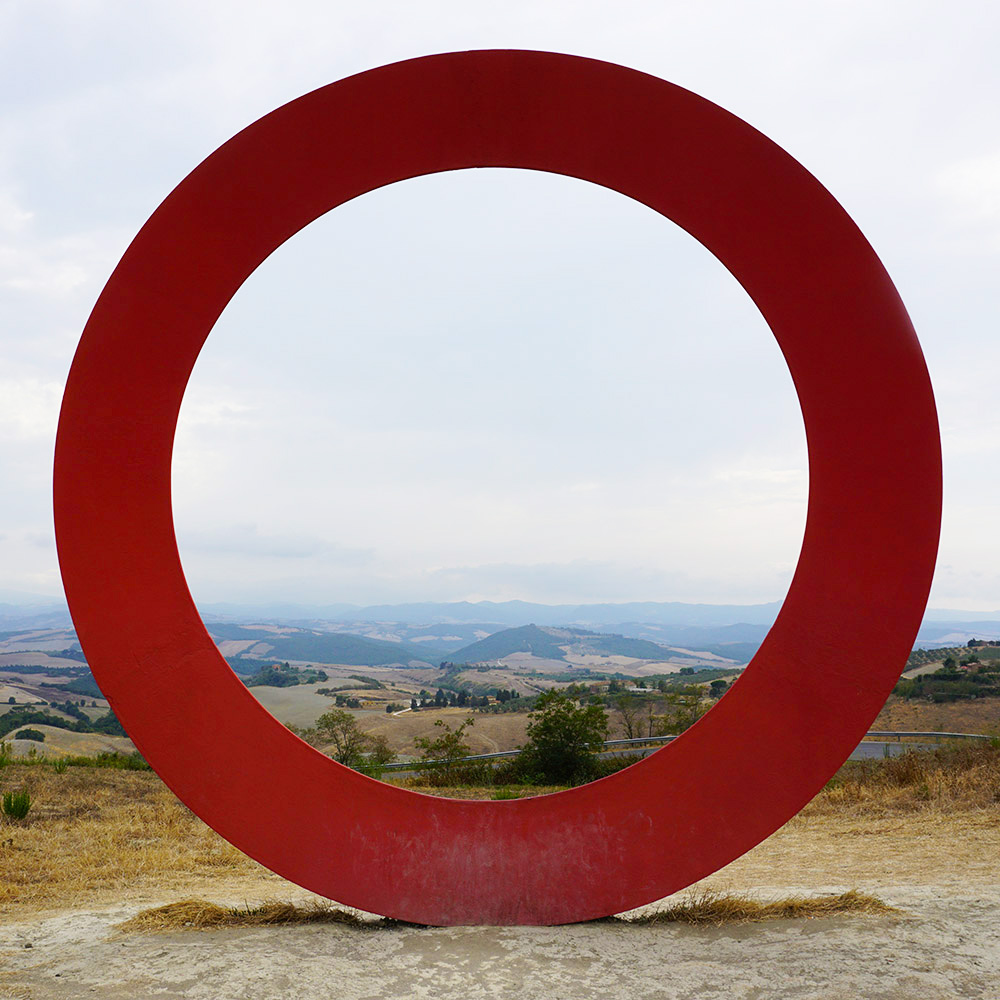 This huge red steel ring is the symbol of Volterra. 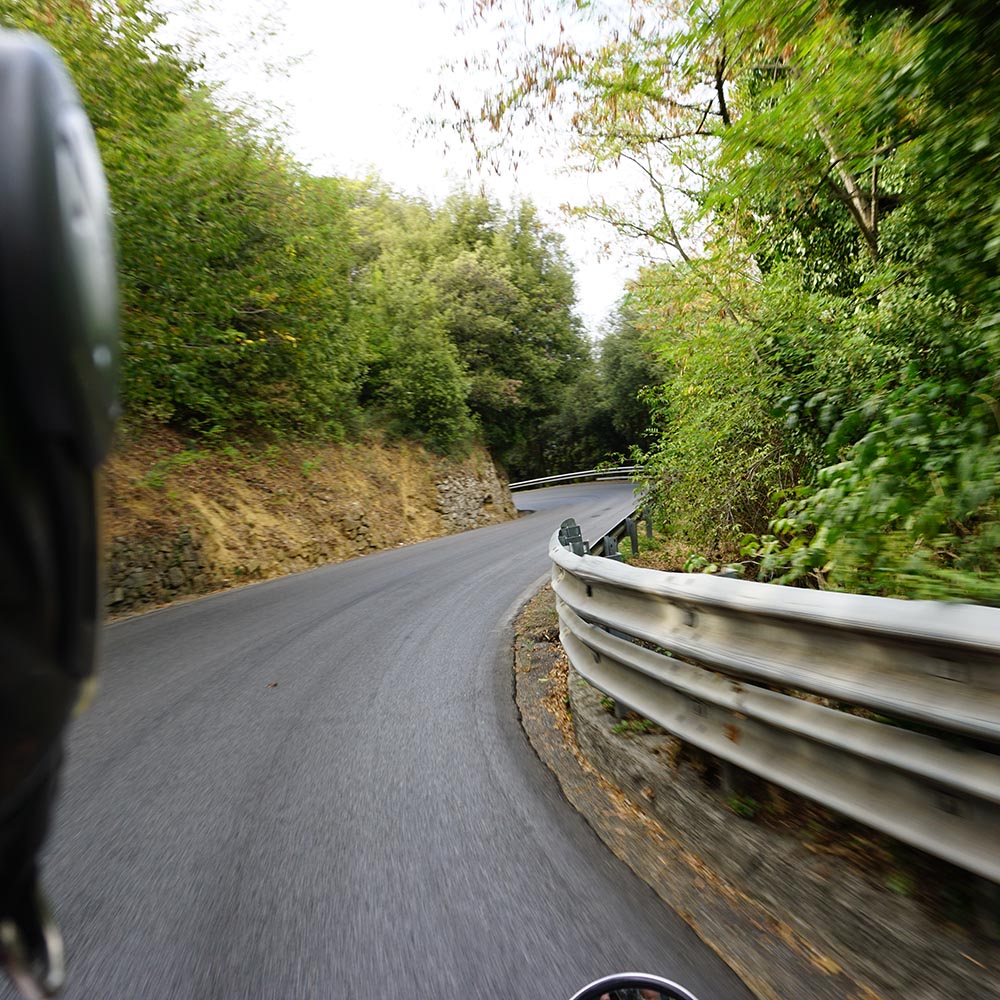 The streets of Volterra

Once in Volterra, we turn the Vespa off at the entrance and explore the narrow, cobbled streets of the Etruscan town. Dimitri shows me the most beautiful corners and tells me some of the history of this ancient city. The Romans had a good time at the theatre and thermal baths, the remains of which can be seen today, with the most wonderful panoramic views. Past inviting ice cream parlours, fragrant trattorias and colourful tourist attractions, we sit in a nondescript café, completely untouristy. Locals throw back espresso at the bar, men argue with their hands, presumably about world politics – sometimes a cliche is also the reality. 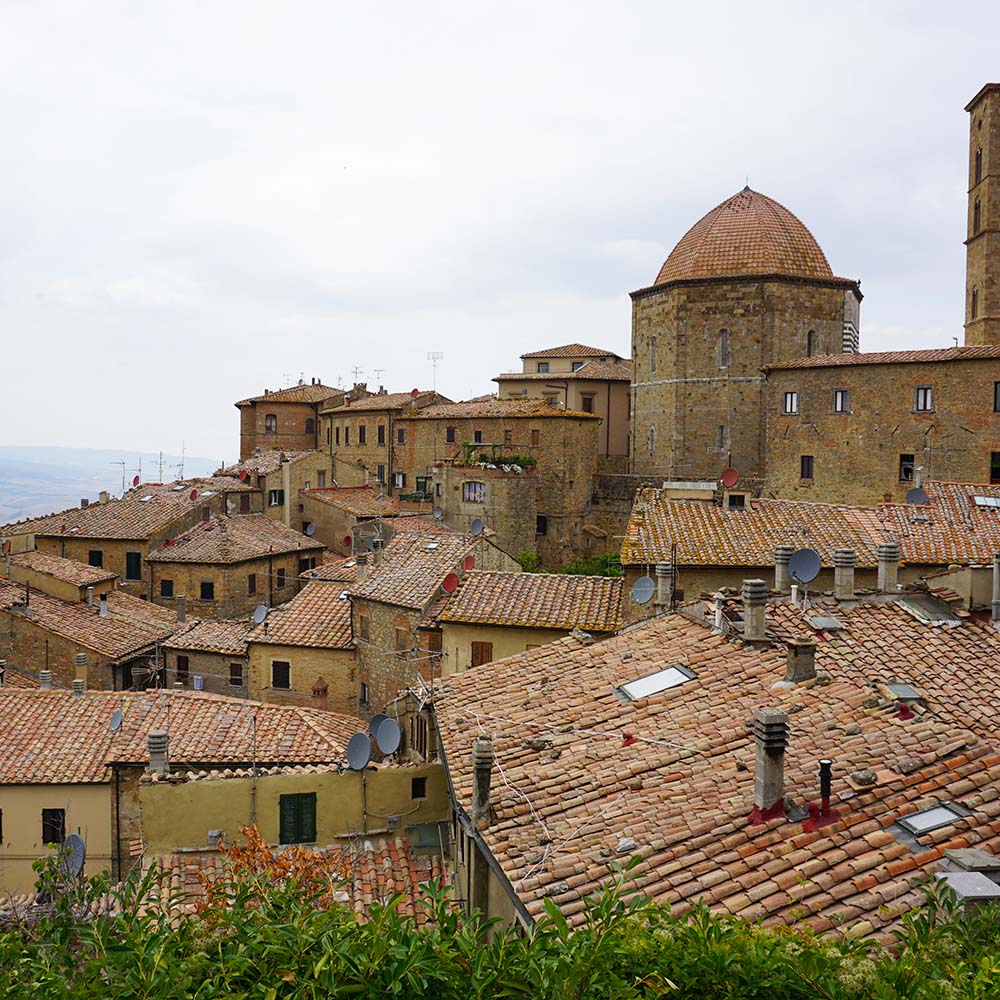 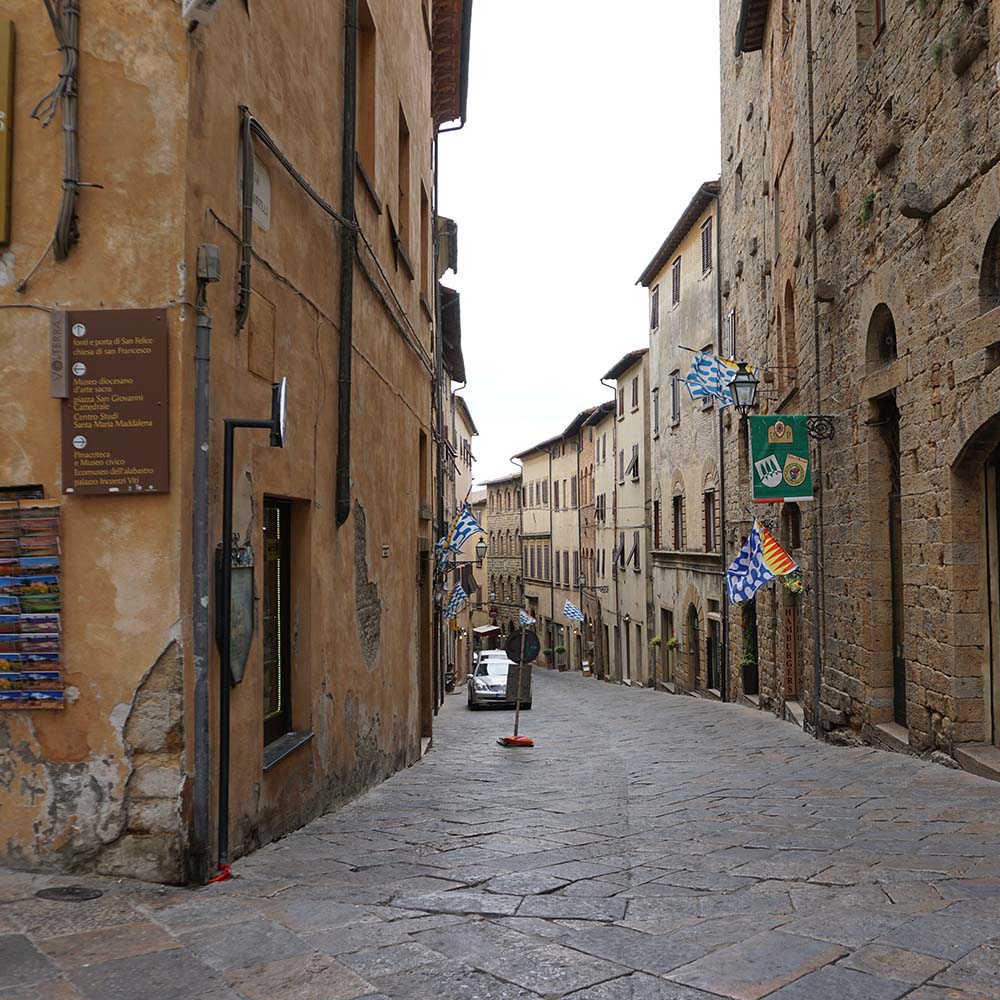 The streets of Volterra

The theatre in Volterra from the Roman Empire is impressive.

Of inattentive holidaymakers and broken bones

I’m still full from the Tuscan cooking class I had done earlier, and I listen Dimitri’s stories with a cool drink. He tells curious anecdotes of tourists who want to experience Tuscany season after season on the Vespa. From inattentive travellers who get completely lost and reappear in the middle of the night, to tourists who totally overestimate themselves and go home with broken bones after accidents on the Vespa. I’m glad I’m not driving myself. By the way, Vespa tours are most popular with Americans because they find Tuscany to be the Italy they had imagined. We come back to another cliche. What these holidaymakers would have liked is the wine tasting and the terracotta course, which I participated in with my fellow blogger Dirk at the Hotel Il Castelfalfi. 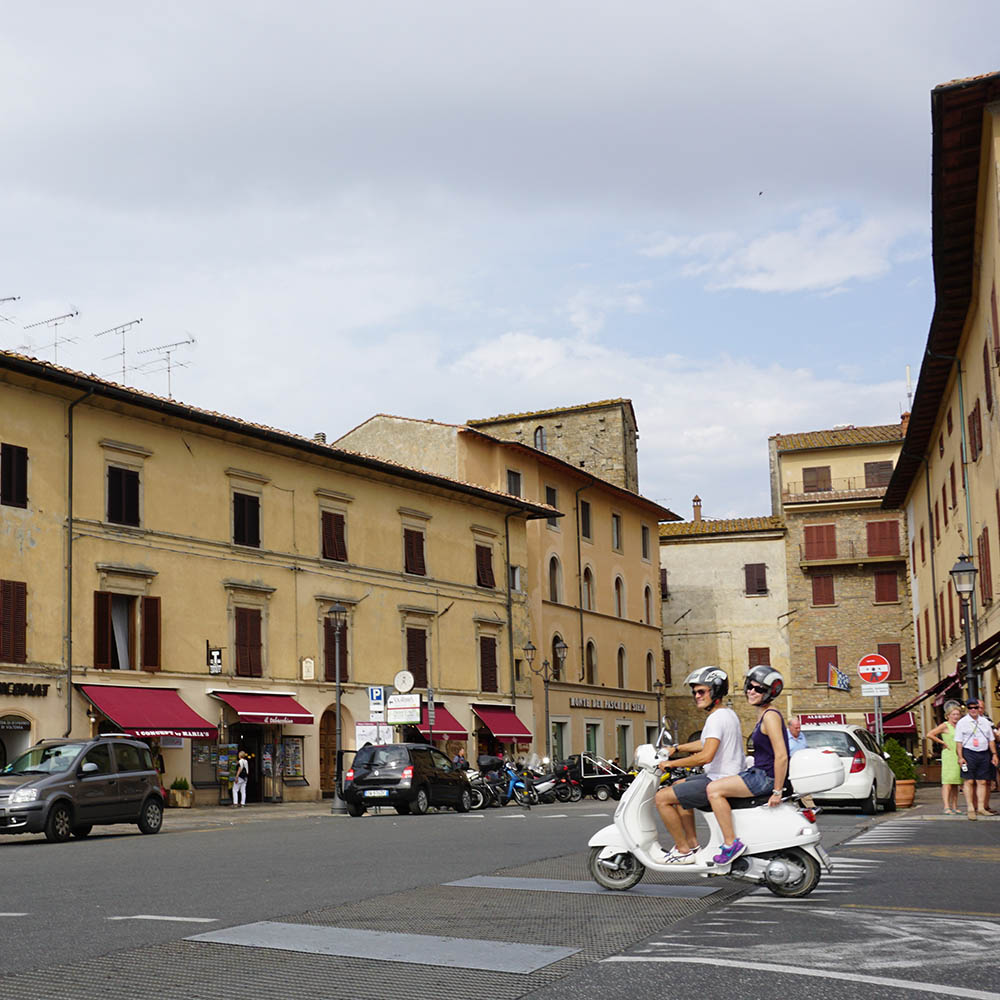 Meditation on the way back

A few more photos of Volterra and we drive on another road back to San Gimignano. Again, many shaky photos during the ride, marvelling at the scenic masterpiece of nature, and the question: why is the Vespa tour over so soon? I could spend a lot of time driving around Tuscany like this. There’s something decadent and at the same time very reassuring about it. The landscape and the humming of the Vespa lull me into a trance, so that I almost want to nestle against Dimitri and start dreaming. I only wake up from my meditative state when San Gimignano comes into view with its distinctive towers. Somewhat stiff, but happy, I descend from the Vespa. Grazie Dimitri, the Vespa tour with you was great! Now I gaze at San Gimignano and satisfy myself at the famous ice cream parlour with the crowning glory of gelato – very cliche. 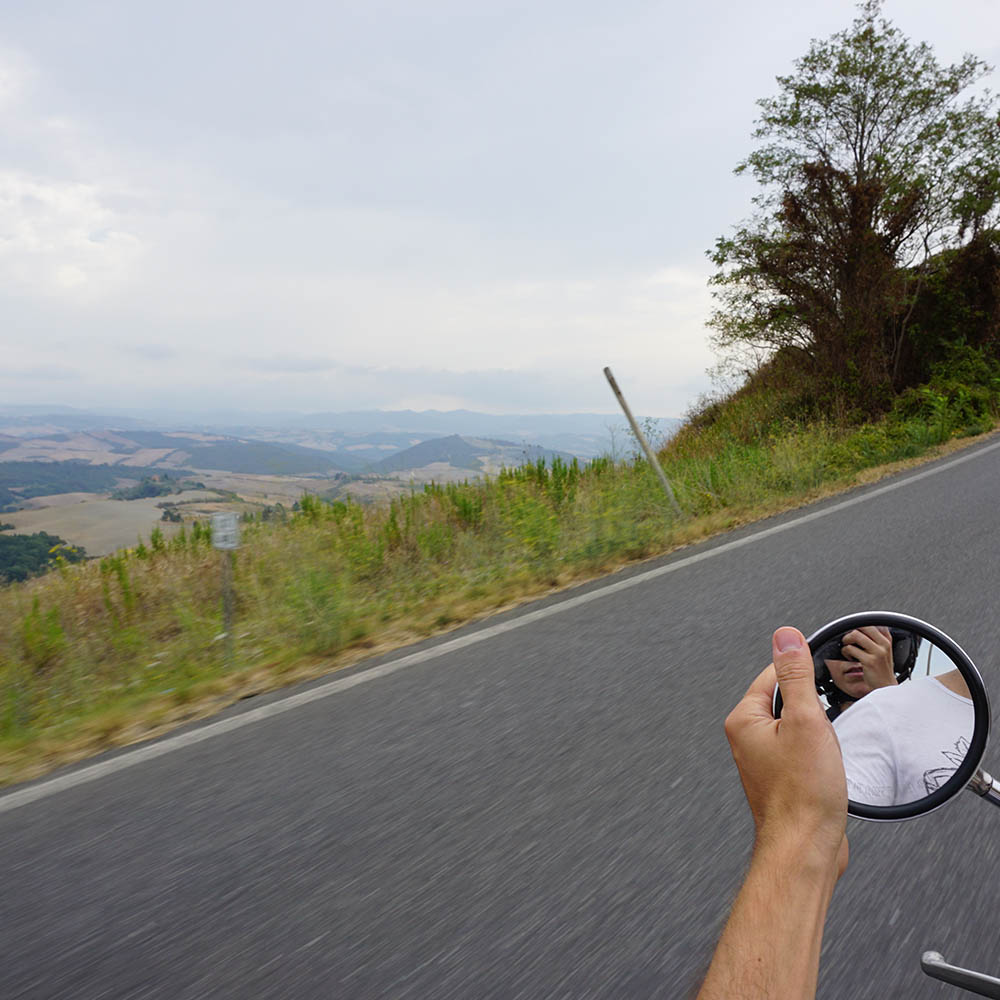 While driving on the Vespa I shoot a lot of photos – I really want to capture those moments.

CONCLUSION: For someone with little or no driving experience on a scooter, I would not recommend doing the Vespa tour on your own. But if you already know something about it and drive carefully, nothing stands in the way of the self-guided Vespa tour. Keep in mind that driving with a second person on the Vespa requires more experience than riding alone, as the centre of gravity shifts. If you don’t drive yourself, you’ll miss out on the driving pleasure of being in control, but you don’t have to concentrate so much and can enjoy the ride without any restrictions. With a guide, it’ll be more expensive, but at the same time you have the luxury of a driver and city guide all in one.

The ride on the Vespa is an experience that I can recommend to anyone who wants to explore Tuscany.

You can rent Vespa with or without a guide at Bellini in San Gimignano. If you’re looking for a strategic starting point in Tuscany with spectacular views, I can recommend the village of Castelfalfi. Among other things, I baked the perfect pizza there and took part in a truffle hunt with a dog.

Italy Things to do Tuscany Tuscany