Sunset and Moonlight: Going by jeep to the end of Portugal

07 Dec Sunset and Moonlight: Going by jeep to the end of Portugal

Oh, you beautiful Algarve! Endless beaches, turquoise blue sea, orange-red cliffs, and exotic fruits as far as the eye can see. Right in the middle was the new TUI BLUE Falesia at Olhos de Água near Albufeira. Check out Miri’s blog article for an extensive description of what to expect in the hotel. But everyone knows that when you stay in one of the most beautiful regions of Europe, you should leave the hotel – even if it is a TUI BLUE. And so, the proverbial cabin fever quickly set in for Miri and me. Without further ado, we got some tips for organised excursions in the Algarve from Sandra, the future BLUE® Guide manager. After a short consideration, we opted for the Sunset and Moonlight Jeep Tour.

What would await us?

As the name Sunset and Moonlight implies, we were off to enjoy the wonderful light of the Portuguese dusk and a spectacular sunset – one that cannot be seen in many places in Europe. Here, the evening sun doesn’t disappear behind mountains or sink into the Mediterranean, but plops right into the Atlantic Ocean. Almost the last sunset before America! Sandra didn’t want to tell us much more, except that we’d be travelling by 4×4. Unfortunately, I wasn’t allowed to control this one myself like in Mallorca. But what the heck, off-roading always works! 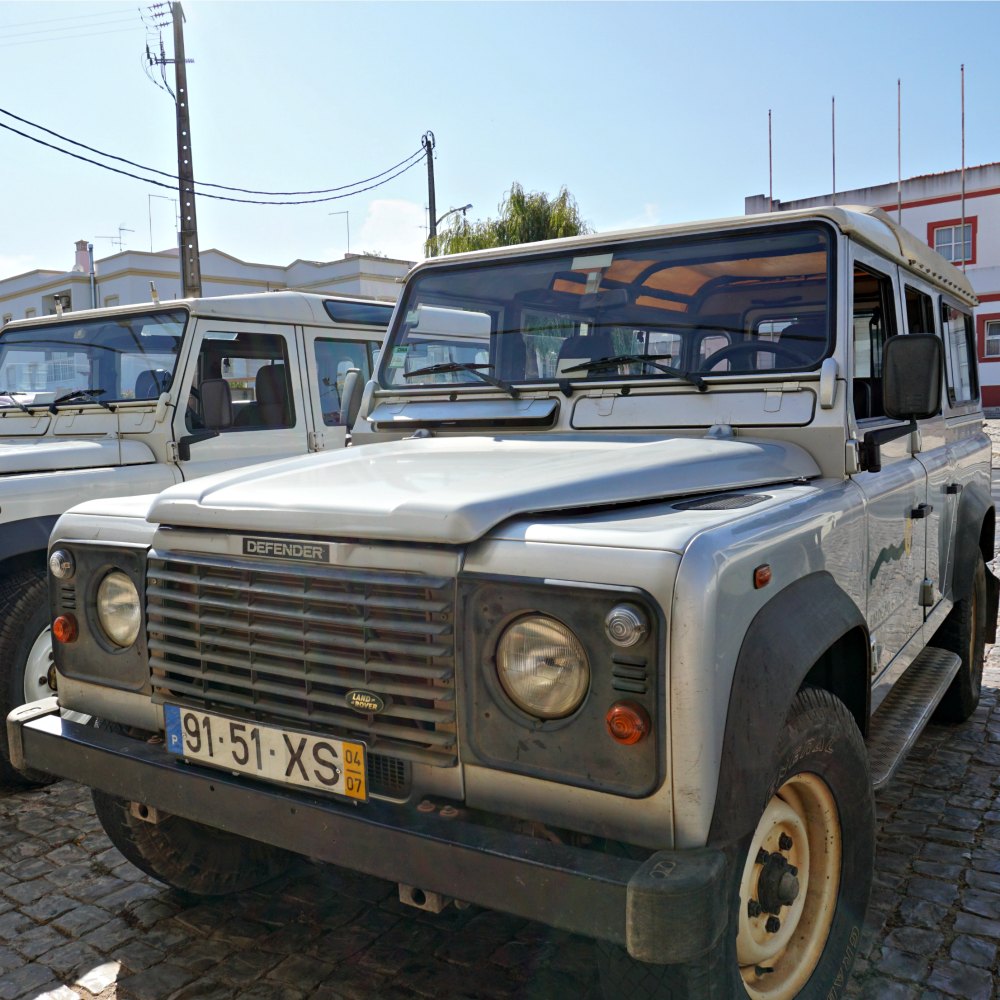 The next day we were picked up by driver and guide Michael with his Land Rover Defender after a delicious lunch at TUI BLUE Falesia. Michael lives in the adjacent Albufeira and only began accompanying the Sunset and Moonlight Tour this year. When he told us that he also drives a taxi in addition to guided excursions, we immediately knew he had petrol in his blood. “We’re late!” he greeted me, Miri, and the older British couple next to us in the SUV before pressing on the accelerator. So we raced full-throttle through the streets of the small coastal town of Olhos de Água, and met two more adventurers in front of their house.

Our excursion took place in a small convoy with other SUVs

Although it was nearly October, the midday sun felt more like summer. Air-conditioning? Nope! Our only access to fresh air in the antique-looking British SUV came through the vents and the open windows. Ugh, it was warm, and I was wishing we were headed to the beach.

On our way to Monchique, we first passed Albufeira. Of course, Michael knew the city like the back of his hand, and we quickly picked up the two remaining guests in front of their hotel. Our driver and guide was soon talking animatedly about his lush downtown garden. “I grow a lot of fruits and vegetables and all year round!” he explained.

However, we’d have to take his word for it, as there was no time for a stop, so we left the beautiful old town of Albufeira behind us and continued the Sunset and Moonlight Expedition. We passed the small village of Guia, the self-proclaimed “Capital of Chicken”. It’s called the “Capital of Chicken” because of the numerous restaurants that offer the world famous piri piri chicken as a specialty. In fact, the city officials have commemorated their love for poultry with a monument featuring giant concrete hens. Unfortunately, we didn’t have enough time for delicious poultry either, so we continued our journey towards the hinterland.

At a small tavern near the town of Silves we met with other SUVs filled with adventure-hungry tourists. We were the last to arrive (despite Michael’s lead foot), and so he and the other guides promptly started a small introductory round. Riccardo, apparently the youngest in the bunch, introduced his colleagues in the best English and with a good sense of humour. He saved a special joke for George. George, affectionately called Shrooney by all due to his resemblance to both George Clooney and animated ogre Shrek, was the troupe’s clown. He and Riccardo had a good laugh at each other. They then gave us a glimpse of what awaited us on the Sunset and Moonlight tour before we continued our journey in a column. Our first destination: an orange grove! 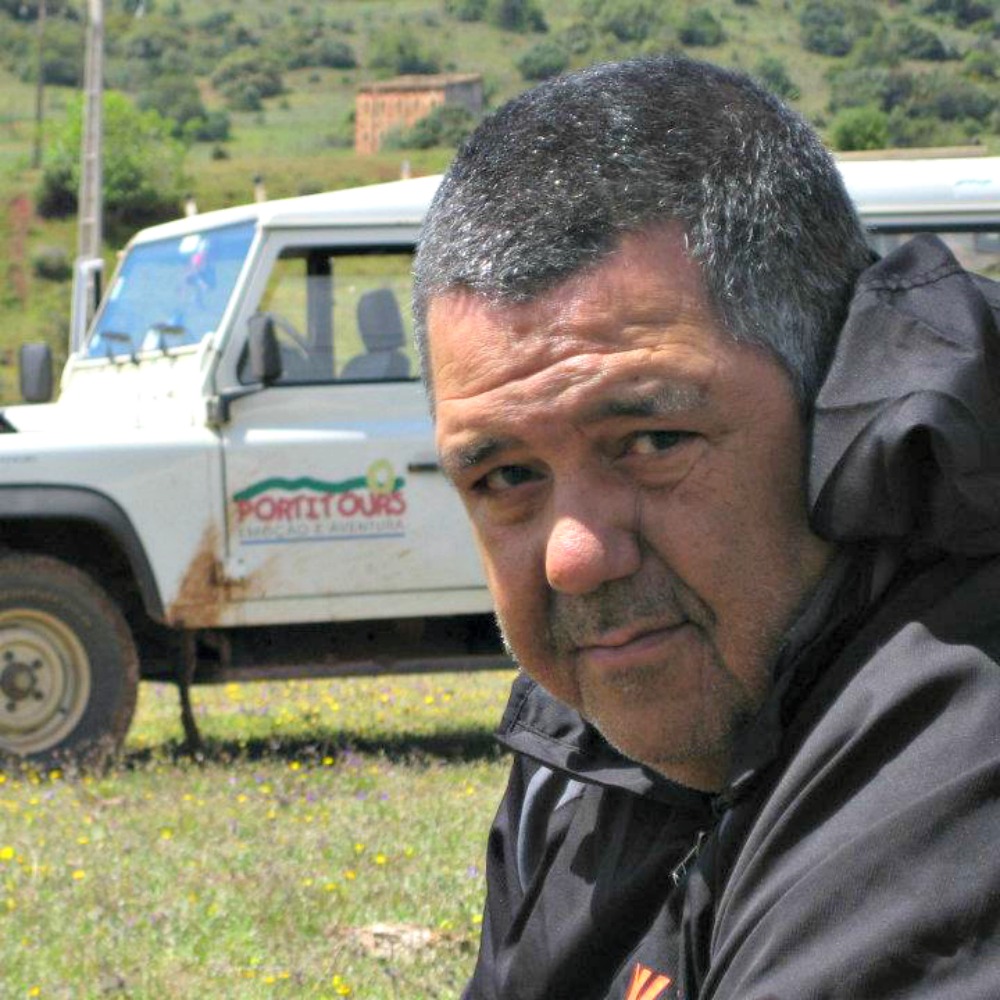 From juicy oranges and cork trees

The Algarve is home to all sorts of fruits and vegetables, but one fruit can literally be seen everywhere – the orange. No wonder then that our first stop on Sunset and Moonlight was an orange plantation near Silves. With the Land Rovers, we climbed an unpaved road and stopped in the middle of the orange grove. Michael gestured to me and the other passengers to get out, and a few moments later we stood between wonderfully fragrant orange trees. 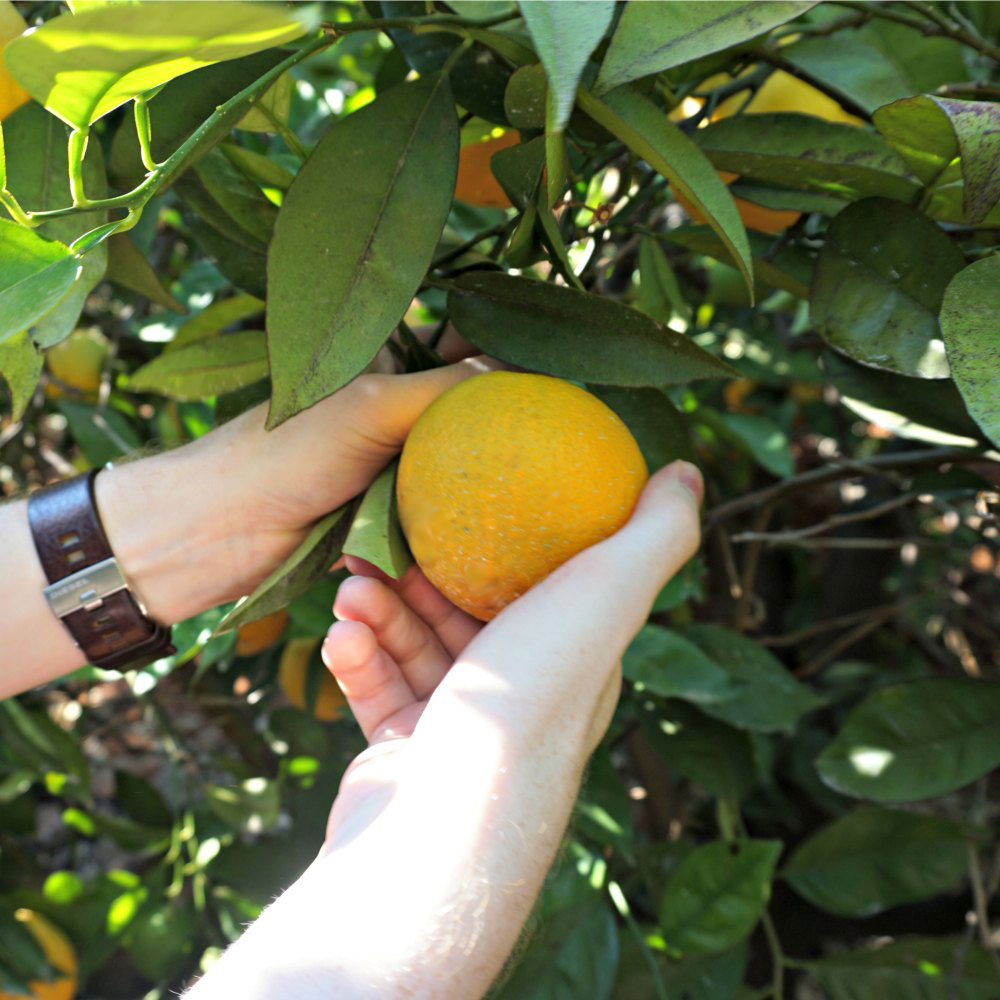 Hold with one hand, turn slowly with the other – and that’s how you pick oranges!

We were eager to start picking, but first Shrooney and Riccardo explained how to pick oranges like an expert. The trick is to turn the orange with one hand while the second hand holds the branch. That was all the coaching I needed, and I was ready to try it out myself. How did it taste? I can say without exaggeration that I have never eaten a better orange! Before we left the plantation, Michael had a short chat with the farmer. He then told us that the farmers in the Algarve naturally cross different varieties of oranges. As a result, farmers can ensure a year-round harvest, among other things. 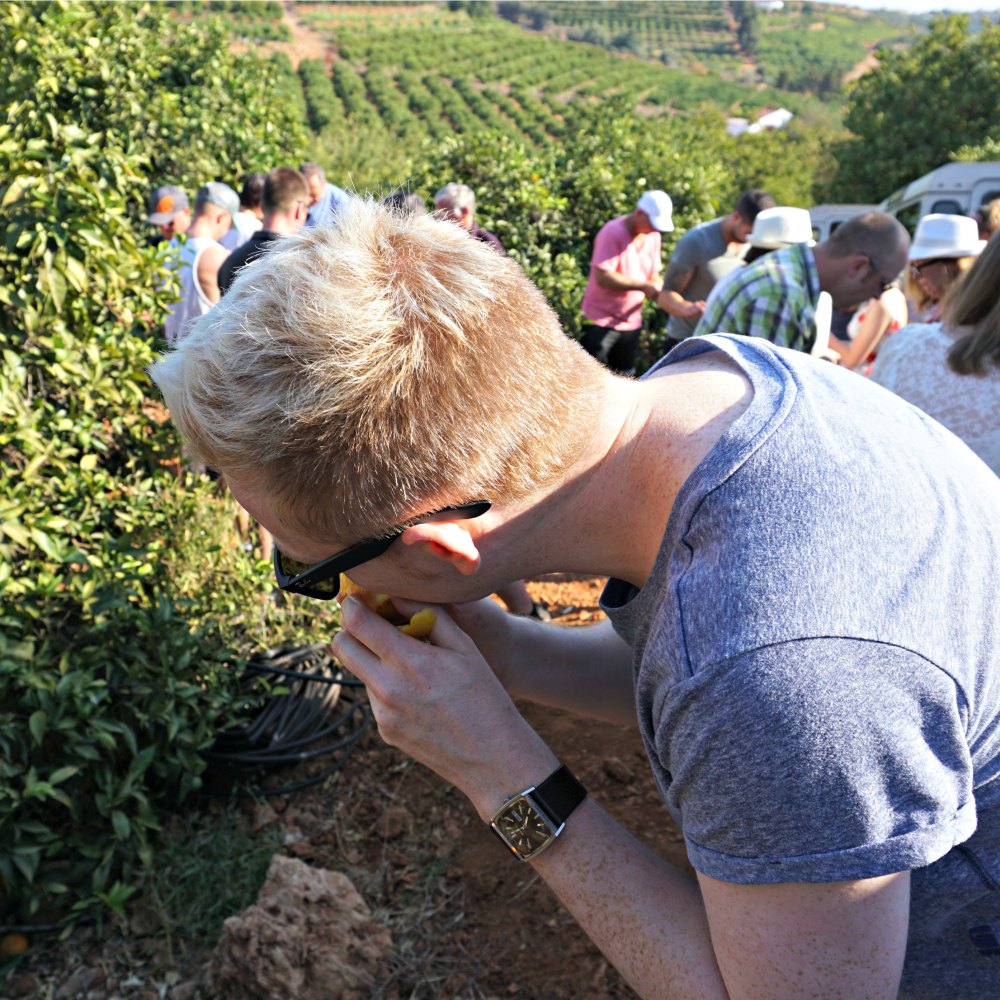 We continued our journey towards the Monchique Mountains, discovering another export hit of the Algarve along the way – cork. “More than half of the world production of cork comes from Portugal,” explained Michael. The trees can grow up to 150 years old, and are only harvested every nine years, by hand. The plants to the left and right of the road were marked with numbers indicating the year of the last harvest, and thus facilitate the planning of the next harvest. 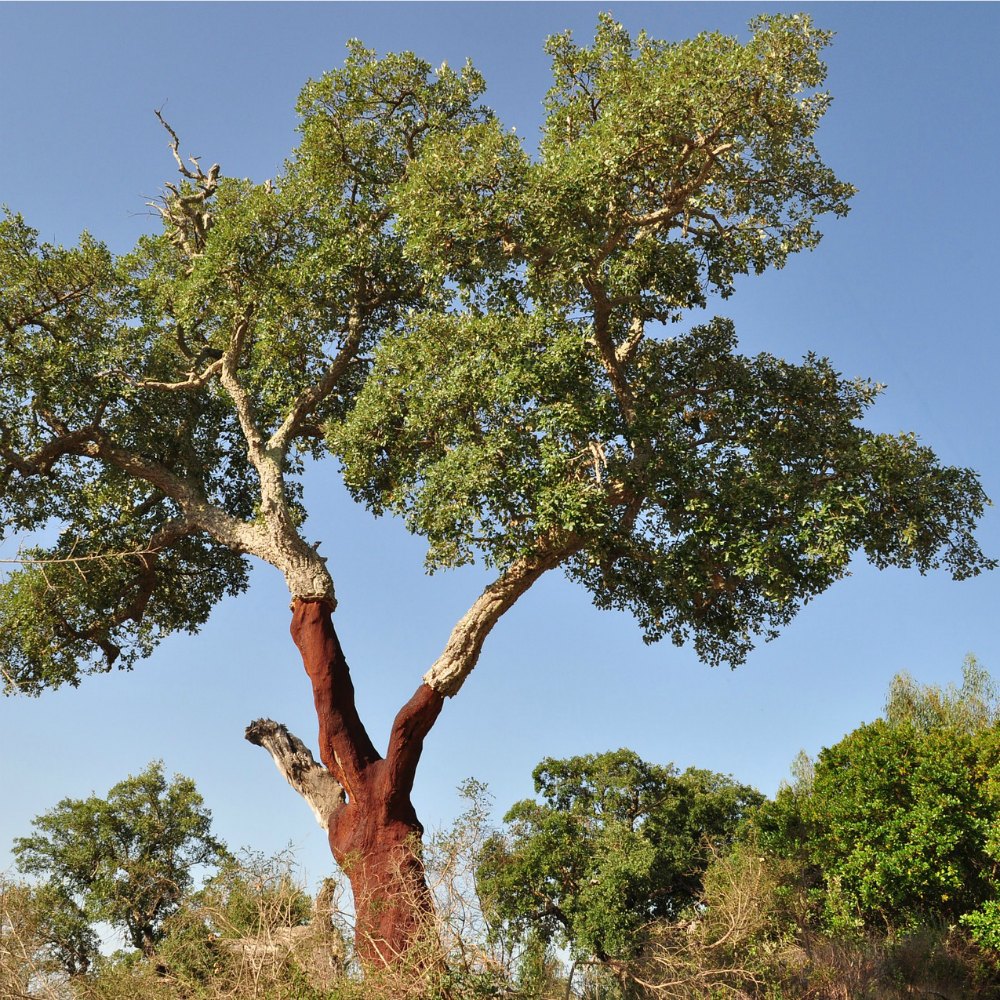 We continued our drive towards the sunset, but not without a last photo stop in the mountains of Monchique. At almost 800 metres above sea level, I enjoyed the view of the Algarve below and the Atlantic Ocean beyond. Michael explained that from our high perch, we could get an idea of ​​how the farmers in the Algarve irrigated their plantations – via dammed up water from the hinterland. And indeed, the Portuguese countryside looked greener up there than on the rugged coastline. The other adventurers and I finally tore ourselves away from the breathtaking view and the Sunset and Moonlight expedition continued. 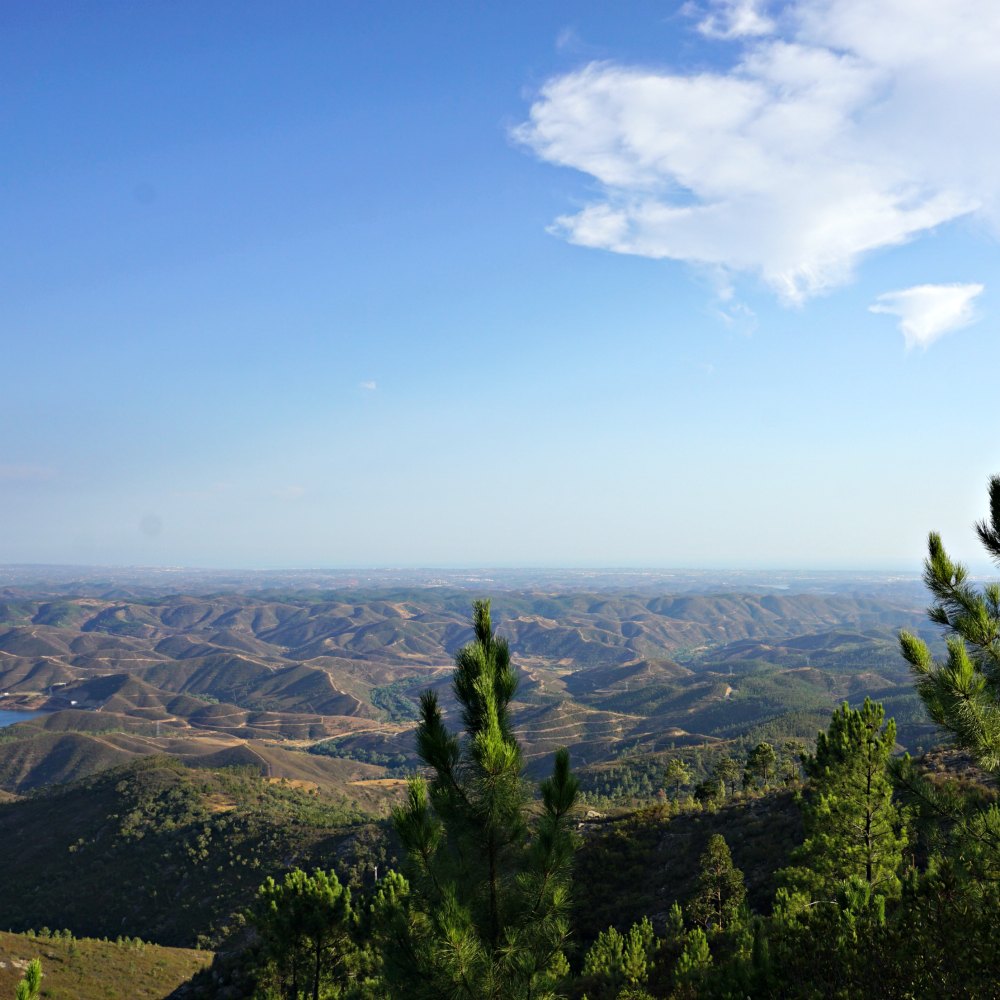 The light slowly turned golden and only timidly made its way through the cork trees that lined the road. As we broke through the vegetation, we suddenly found ourselves surrounded by rough rocks and boulders. We were almost to our goal! Once more, we turned right off the paved road and onto a dirt road, which would lead us to our final vantage point. The convoy stopped and all passengers stormed enthusiastically out of the vehicles. Before us spanned the view of the western end of the Algarve, while behind us glimmered the majestic Atlantic Ocean. 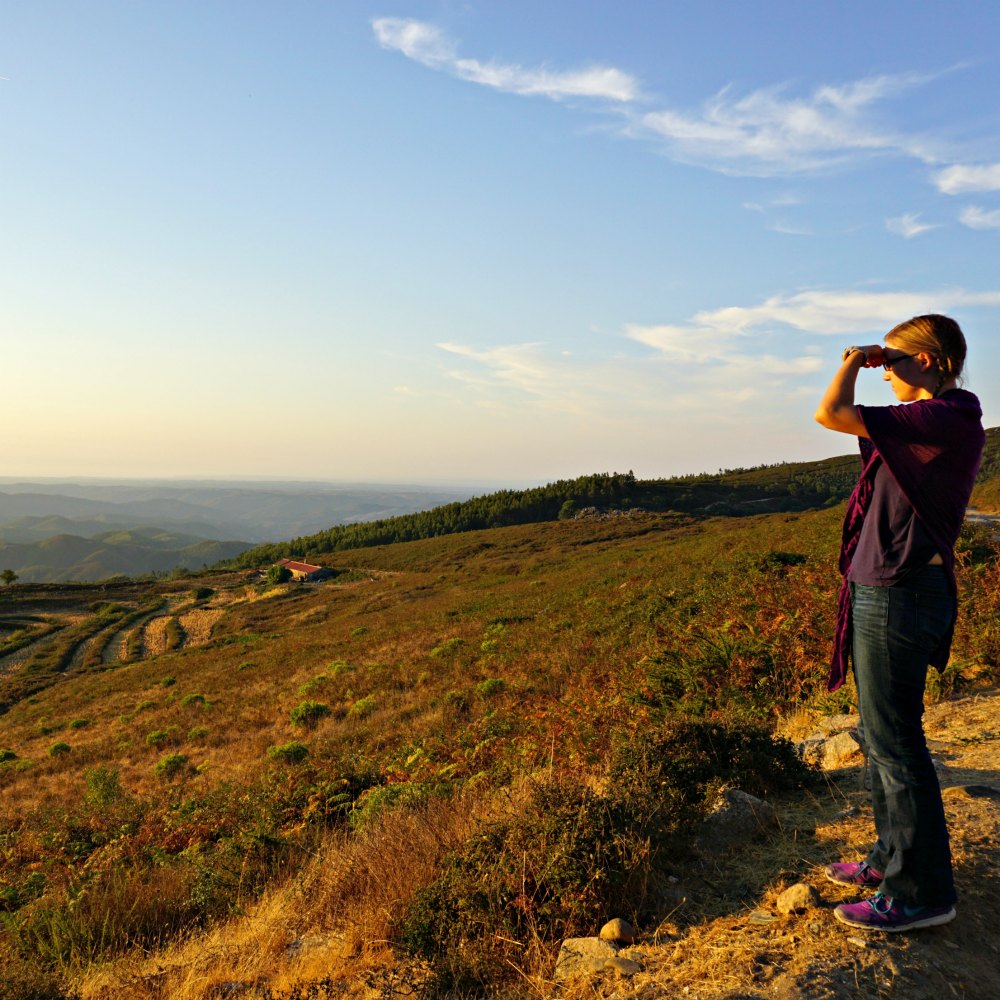 Miri enjoys the view of the Atlantic Ocean

Michael and the other drivers then eagerly distributed champagne glasses to all us sun-watchers and filled them with bubbly. Things got even better then! The sun was already low and it wasn’t be long before it fell completely into the Atlantic Ocean. My fellow travellers diligently took souvenir photos, while I preferred to soak up the fantastic view without a lens. The sun first turned orange, and then dripped slowly into the ocean as a blood-red fireball. The play of colours in the sky became more and more vivid and appeared in all imaginable shades and hues. The others and I watched for a few more minutes, spellbound, until seemingly all in unison our stomachs grumbled. Time for supper! 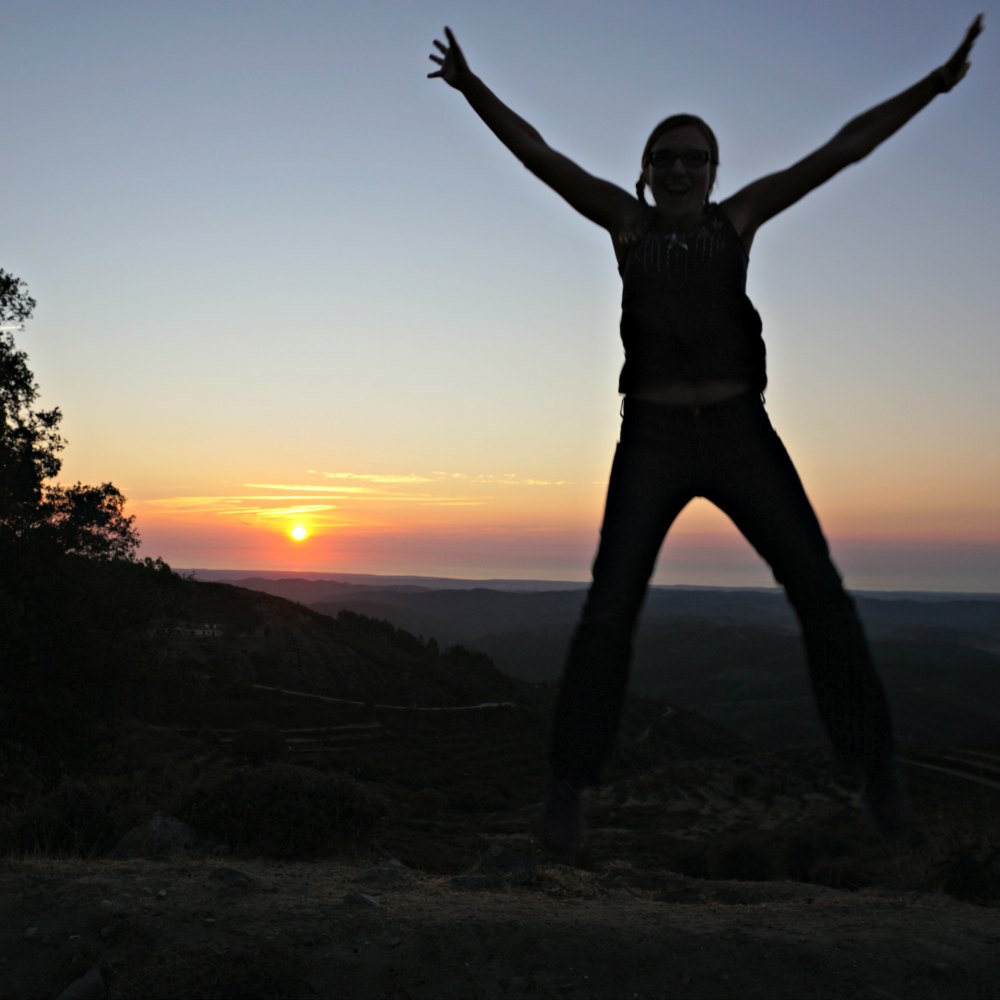 Our last Sunset and Moonlight stop took us to a quaint eatery halfway down the valley. The traditional dishes of the Algarve were served: a colourful salad as well as a strong vegetable soup as a starter, then as a main course slow-cooked pork refined with local spices, and for dessert, home-made schnapps! In addition, the regional wine was flowing, and the drivers – Michael, Riccardo, and Shrooney – shared plenty of anecdotes. 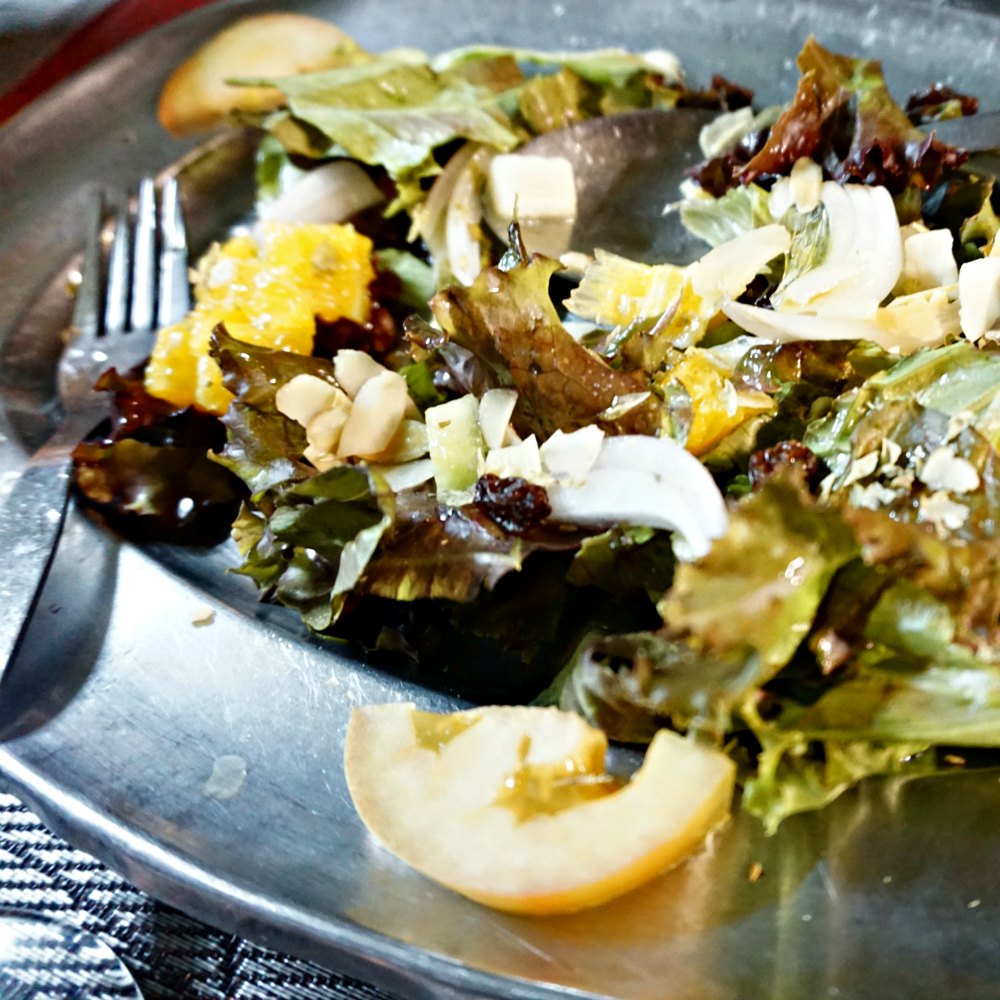 An all-around successful day with lots of background information, knee-slappers, and stunning scenery was coming to an end. Driver and guide Michael ferried us back to TUI BLUE Falesia with the same safety and precision  we came to expect from him. We said our goodbyes and I was glad that I didn’t spend the day on the beach!