When I think of snowshoeing, I picture Eskimos with tennis rackets under thick moonboots struggling against an icy storm through Alaska. My trip in the spiky footwear wasn’t quite as exciting, but I got that feeling of an expedition nonetheless, which left me wanting more.

After a hearty breakfast buffet at the TUI BLUE Schladming, I was well fortified and met our little group in the lobby. Our group consisted of Miri from the TUI Blog, who has never skied before, Elisabeth and Marion from the hotel reception, and Andrea, our tour guide from IN A TEAM. After getting briefly acquainted, we were equipped with snowshoes and ski poles and headed out.

Since the last snowfall was a while before, we had to push farther in to higher altitudes. To get there, we drove to the second station of the Planai cable car right in front of the hotel. Already, the roughly 15-minute gondola ride was worth the visit. Slowly, and in almost complete silence, we slid up the mountain and had unrestricted views of the impressive Dachstein massif. On ice and snow

Once at the top, our first task was to get ourselves and our gear ready for the upcoming hike. Andrea explained how the snowshoes were constructed and all the individual components to our group. One prerequisite for snowshoeing is sturdy shoes, because the rest is just strapped underneath. Once the shoes were lashed on and the poles were set to the right length, it was time to go. Since the snow had yet to come – as I already mentioned – we marched like ducks off the artificial snow and groomed runs uphill, toward the sun. The large spikes beneath our feet provided optimal traction where we otherwise would’ve slipped on the snow-covered and icy ground with normal footwear. As far as the eye can see

After just a few metres, I had already sweated under my many layers of thick winter clothing. Time for a rest. It was an excellent opportunity to turn around and take in the breathtaking view. The air was cold and crystal clear, the sun was shining and I felt like I could almost see all the way to Hanover. I couldn’t, of course, but the sight of the impressive Alpine panorama still wouldn’t let go of me. I’m actually a fan of exotic holiday destinations with turquoise seas, white sand beaches, and postcard sunsets. But snowshoeing up here, I couldn’t resist the spell of the mountains. 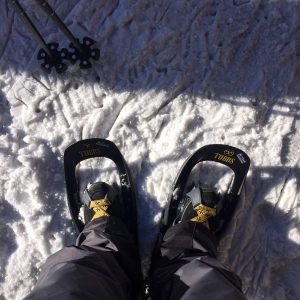 In the vastness of the Dachstein massif I felt immediately, incredibly small, and despite the courageous people rushing by us every now and then on skis or snowboards, everything seemed quiet and subdued on the Planai. It was all too easy to forget where I was, and snowshoeing cultivated a feeling of adventurous expedition. The radiant faces of the other “expedition” members told me that they felt similarly. We acquired even more altitude and eventually reached the summit cross of the Planai at 1,906 metres high. And although we had cheated a little bit this time by achieving most of the altitude with the cable car, we were all happy and proud. As a reward, there was a delicious home-brew from Andrea’s flask, which warmed us up and prepared for the impending descent. But first we had to make some lasting memories of the breathtaking scenery.

Even downhill, the shoes kept their promise – control on both ice and snow. On the way back, we descended into the next meadow, where we were strengthened by a hot drink and a hearty meal. Although we didn’t see or experience as much as one of Andrea’s regular tours of the region, we nevertheless got a very good impression of snowshoeing. Off the slopes, this is a quieter way to travel through the wintry climes of the Alps. The scenery doesn’t race by you, as it does on skis or snowboards. Instead, you have the opportunity to enjoy the countryside around Schladming, to turn off, to find yourself.

I was as excited as the rest of our group and I’m looking forward to my next expedition on snowshoes. Next time with more adventure, maybe an icy storm and one or two Eskimos.