On Wide Tyres: Riding the Fatbike in the Alps

09 Dec On Wide Tyres: Riding the Fatbike in the Alps

We rode fatbikes on snowy roads for you. Rode what? Bicycle riding in the snow? At our latitudes, this is only for die-hard bicycle enthusiasts or people with a penchant for breakneck action. In the Alps and other winter sport regions worldwide, a burgeoning trend sport evolved from this. Extra wide tyres provide the necessary traction, hence the term “fatbike”. In terms of appearance, the martial-looking bikes score at first glance. To determine whether they’re any fun or can even maintain traction, we did a test drive in the Schladming-Dachstein region for you.

Benjamin, Michael, and I

During the lunch break, my colleague Benjamin, who works reception at the newly opened TUI BLUE Schladming, and I headed towards Ramsau am Dachstein. The winding drive is a good prelude to what awaits us later that day, but more on that later. In the centre of a small village, we met with Michael Stix at Alpine Fatbike, the local provider for fatbike tours in the region. Michael greeted us and began his introduction to the bike with balloon tyres while clearing out the trailer behind his car. After picking out a matching helmet and adjusting the seat to the right height, the fun could begin. A ride on a Fatbike is mostly like riding on a standard mountain bike. At least on the first few metres on a paved path, we didn’t notice a difference. But as we turned onto the freshly groomed cross-country skiing trail, something became abundantly clear: nothing could easily throw these bikes off. We rode on packed and loose, shallow and deep snow with ease, as if it was asphalt. After a short time, we left the track and dealt with the first climb. The displacement of snow forced us to keep a steady, even pedaling pace to make sure the wheels didn’t spin out. So we knew how to go uphill, but going downhill was what would convince us of the fatbike’s abilities. With little regard for the terrain beneath us, we tore downhill as the wind blew past our faces.

He who loves his fatbike … 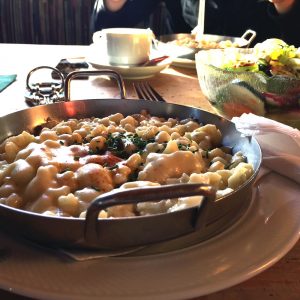 The fun was over quickly, because another climb followed. Unfortunately, as an untrained lowland Tyrolean, I had to surrender to the mountain once or twice. True to the motto “He who loves his bike pushes it”, I had to walk my fatbike up a few metres in altitude. After about an hour, we reached our goal, the Sonnenalm on the south side of the Rittisberges. Awaiting us here, in addition to the stunning views of the Alpine panorama, was the candid owner Matthias. With some refreshing black tea with lemon, hefty kasnockerln grey cheese, and hot kaiserschmarn, our small group found renewed strength. To top off the nourishment, there was coarse-made vodka accompanied by equally bawdy toasts. Shortly after, we took our leave of the cosy atmosphere and left the quaint, cheerful meadow to head home. Meanwhile, Matthias serenaded us with his accordion. It would be tough to find more hospitality!

What followed will be long remembered. While the ascent was something between a postcard and a scenic drive, the departure took another angle. In best downhill way possible, we rushed through the switchbacks of the dirt mountain road down into the valley. Again, the fatbike stuck to all surfaces: snow, ice, gravel, and dirt. About halfway down the hill, our guide, 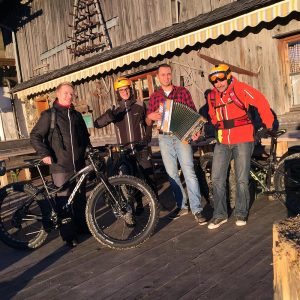 Michael, broke from the path to an open, snowy piece of pasture. Benjamin and I followed him confidently. Now, the full fascination of the fatbike unfolded. With the wide grip of the tyres, we put our tracks in the pristine snow almost unhindered.    The bike stuttered on the shaky snow, but stayed upright, on track, and incredibly fun. Grinning and full of adrenaline, we went farther down and reached the valley a short time later.

After some shallow climbs and dips, we found a final, brief passage back to the starting point of our tour. Wow, what a weird experience! We wanted more! But, for that day, our tour was unfortunately over. On the way back to the TUI BLUE Schladming, we reminisced euphorically about everything and agreed: this was not going to be our last adventure on the fatbike!

You can read more about our adventures in Austria here and on blog.tui.com soon.