Hurray! The sixth hotel opening in under a year is done – the Il Castelfalfi is now open to you! But what actually happened before and during the hotel opening? Let me give you the days leading up to it from my point of view.

After landing at the Florence Airport, I met – in contrast to my last visit – spring-like temperatures around 20 degrees Celsius and a cloudless sky. On the drive to Castelfalfi, I enjoyed the last rays of the sun before it disappeared like a red ball of fire behind the Tuscan hills. Around 9:00 pm, I arrived at Il Castelfalfi, where it appeared – at first glance – that the hotel opening had taken place without me. The lobby was brightly lit and lively. Here and there, I discovered an empty display case or a few packaged pieces of furniture, but otherwise everything looked good to go. 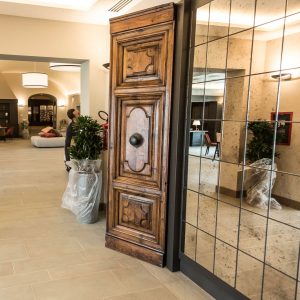 A packaged plant in the lobby

At reception, Beatriz welcomed me. After checking me in, she accompanied me to my room to tell me the most important things about my home for the next few days. A beautiful room decorated in warm, Tuscan colours awaited me. After finding out how the air-conditioner worked, where the bathrobe and slippers were, and how to prepare a hot drink with the in-room coffee maker, I asked Beatriz the question my rumbling stomach kept putting forward. Where could I get something to eat at this time of night? The restaurant was closed and room service didn’t start up until opening day. Beatriz smiled and promised to take care of me. I had hardly closed the door behind her when the phone rang. 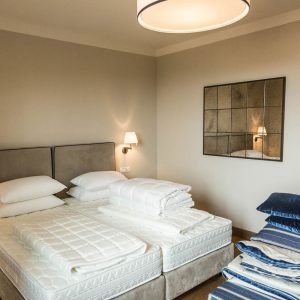 A unmade (yet) hotel bed

The lightning-fast Beatriz told me that the head chef, Francesco, had opened the main restaurant, La Via del Sale, that day just for our team. Just in time for the main course, I sat with my colleagues at the table and enjoyed penne with a fresh vegetable ragout. For dessert, there was juicy pineapple cake, exquisitely decorated with berries. If that was just a small taste of Francesco’s cooking skills, I could hardly wait to do another test run of La Via del Sale after the hotel opening. The chef popped out to personally check on his guests, only to disappear back to the kitchen once again to go over his plans for the coming days. For me, it was then time for bed.

Shortly after opening my eyes the next morning, I realised that I was the first one to sleep in that hotel bed. That wasn’t necessarily on my bucket list, but cool anyway. Already in a good mood, I jumped into the shower to enjoy a fine, cleansing rain. Well-rested and refreshed, I headed to breakfast at La Via del Sale. Despite the early hour, it was quite busy at Il Castelfalfi with the opening getting closer and closer. In the corridor outside my room door, people were putting their heads together to think through the final details. Housekeeping staff were going through all the rooms with a fine-toothed comb, and craftsmen were installing signs to be sure that no one got lost in Il Castelfalfi. In the lobby, pillows were unpacked and flowers were placed about. At reception, colleagues were resolving issues with the team from TUI headquarters in Hanover, who had travelled here for the hotel opening. The breakfast offered an almost endless variety. In addition to breads, delicious jams, various overnights oats, fresh juices, salad, and a whole loaf of Parmesan, there was a diverse buffet of cakes that caught my attention. After breakfast, I explored every conceivable corner of the hotel equipped with my camera. I looked through the fitness room, where my colleague, Lisa, was training diligently, and then made a trip to La Spa. In the spa area, the brushes were out and (warning: puns ahead!) cosmetic corrections were being made. The breakfast left nothing to be desired

A team is sworn in

Outdoors, a fully-automated robot cleaned the pool while – despite clear skies and sunshine – fog rolled through the valley toward Il Castelfalfi. It was a mystical sight I could hardly resist. The view from up there – with or without haze – was truly one of the highlights of the hotel. Later that afternoon, TUI BLUE Managing Director Artur Gerber and Hotel Director Marco Metge galvanised the team from Castelfalfi and Hanover on the upcoming hotel opening and extended their gratitude for everything that had been achieved in the last few months together. We all watched video greetings from other TUI BLUE hotels and a funny video about the construction, directed by the team at Il Castelfalfi. After a short celebration, the preparations for the big day continued. I was definitely not the only one who could hardly wait. Day of the Hotel Opening

For me, opening day began with a group tour with German, Belgian, and Dutch representatives of the press. Divided into two minivans, we visited the Toscana Resort Castelfalfi, which the first 5-star TUI BLUE hotel is part of. Together with the journalists, we visited the winery – where I had already done an in-house wine tasting several months ago -, the ancient village of Il Borgo, the extensive 27-hole golf course, and a typical Tuscan country house. I answered questions from the journalists, all of whom were impressed by the resort. Despite stretching the schedule, we were only able to see a small part of the huge area. On the road with the press in the Toscana Resort Castelfalfi

Having just arrived back at Il Castelfalfi, we found the hotel opening in full swing. The lobby and hotel bar were full of people. There was a mix of politicians, employees, journalists, contractors, and guests – all awaiting the opening speeches. I rushed from one corner to the other in order to get everything on camera. Following the speeches, it was time for the most important item on the agenda: the ribbon cutting. The receptionist Beatriz carried the scissors on a velvet cushion to the gentlemen on the board of directors, executive management, the resort, and the city to cut through the red tape together. Snip, and it was done – the Il Castelfalfi was officially open! Applause rang out and everyone congratulated each other before enjoying the Mediterranean buffet on the terrace overlooking the valley, which was now fog-free. Beatriz the receptionist handing the scissors to the cutting crew

It was time for me to go back with my photos and videos of the hotel opening, evaluate, edit, and spread them on social media. Meanwhile, a hotel tour of Il Castelfalfi took place, and I could hear “oooh”s and “aaah”s from my room. I submitted my last post for the day, all the while looking forward to the next hotel opening. That’ll be soon, because the TUI BLUE Jadran in Croatia is opening on July 1st, 2017.