When I think of Greek cuisine, I think of gyros pita with a good portion of tzatziki, crispy fresh Greek salads and honey-sweet desserts. To ease the wanderlust, I’ve embarked on a taste journey to the blue and white holiday paradise and reveal my top 5 Greek recipes to cook at home in no time.

The food culture of the Greeks – sociable and familial

In Greece, breakfast is rather modest, coffee and pastries are usually enough for the Greeks. The main meal is dinner, where delicious Greek dishes are usually eaten after 9 pm.
True to the motto “eat like the gods”, Greek food culture is famous for its conviviality. If you have Greek friends like I do, you will certainly have experienced the eating habits of the Greeks.
For dinner, it feels like the whole family plus friends are invited, which is common practice in Greece that everyone invites everyone to their place. The hosts like to spend the whole day in the kitchen preparing the various Greek dishes for their loved ones. The choice is huge: from appetising “meze” portions (small appetisers) to snacks, main courses and desserts – the Greeks believe that everyone should be full after meal! Traditional recipes include juicy tomato, green beans, chicken, spinach, roasted vegetables, crusty bread, tzatziki sauce, pork and fresh salads.
And of course there’s always a bottle of ouzo ready to hand to accompany the meal 😉 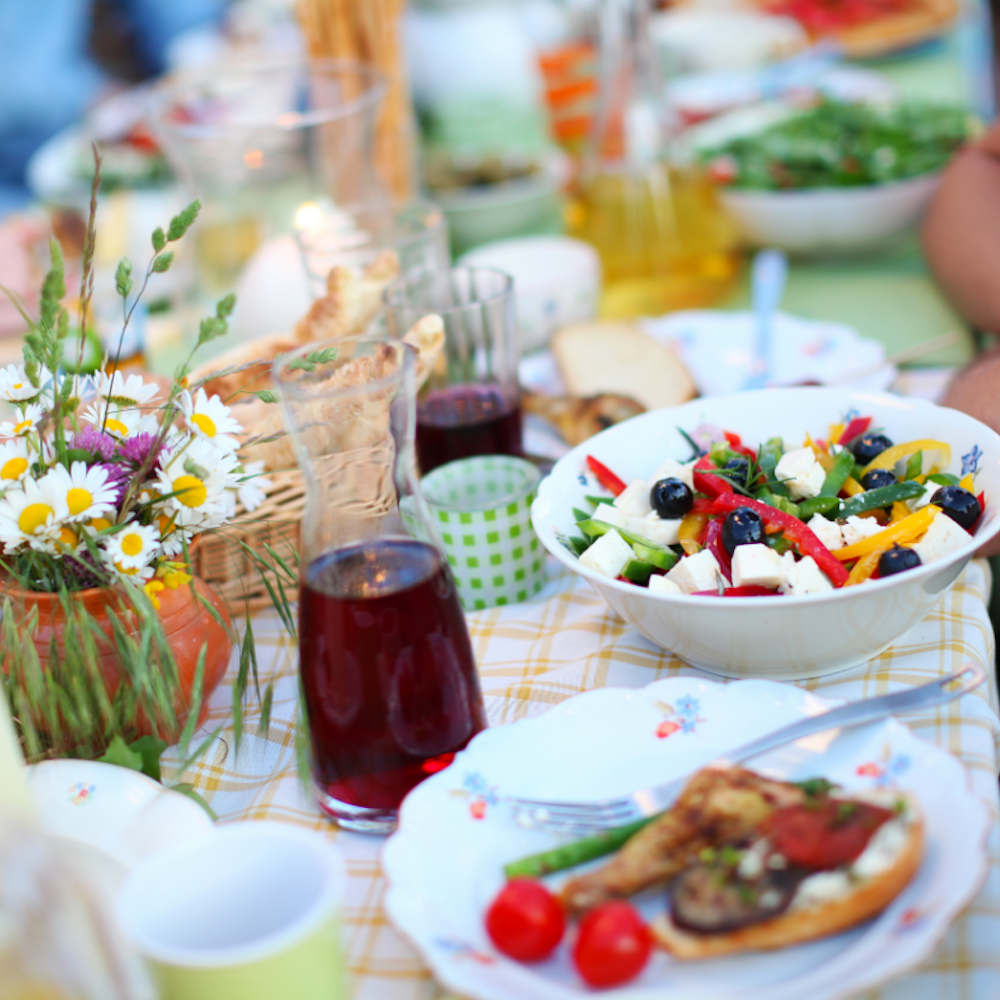 Eating dinner together with family and friends – common in Greece.

At one of the more than 20 TUI BLUE hotels on the Greek islands you can also enjoy the typical delicacies of Greek cuisine at the rich buffet or in one of the à la carte restaurants such as the Blue Bay at the TUI BLUE Atlantica Imperial Resort on Rhodes. But if you’re currently dreaming of enjoying a frappé in your garden at home with a view of the shimmering sea and delicious Greek food, you don’t have to wait for your next holiday:
Come with me on a culinary journey to the Mediterranean and get to know the Mediterranean cuisine of the Greeks.

These deliciously spicy marinated pork skewers serve 4 and taste best fresh off the grill with a big blob of tzatziki. 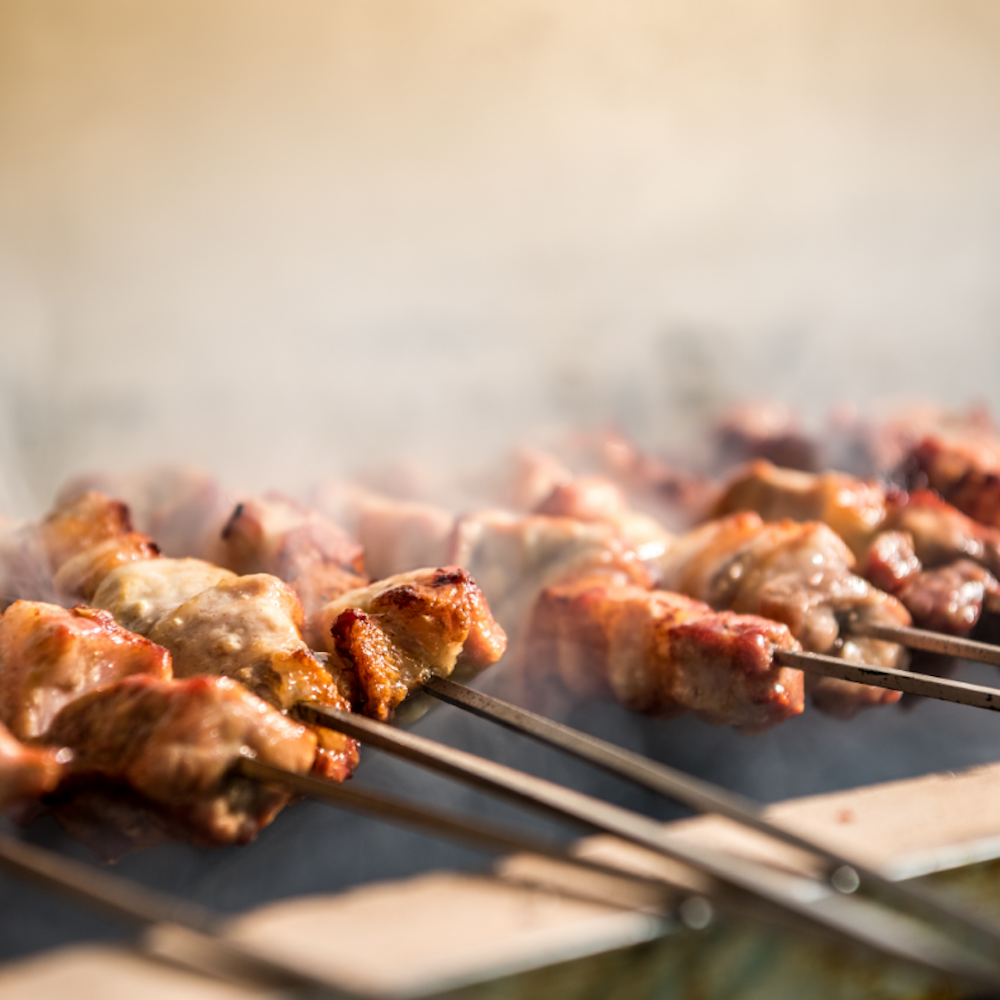 How it sizzles! Now I’m in the mood for souvlaki.

First, cut the meat into slices about 1.5 cm thick. Then cut the slices into 3 rectangles. The meat is now placed in a large bowl. Then press the garlic and mix it with the lemon juice, olive oil, oregano and a pinch of salt and pepper to make a delicious marinade. Spread the marinade over the meat and then mix everything together well. Cover the bowl of meat with cling film and leave it in the fridge for at least 3 hours so that the meat can marinate well before you start to cook it. If you use wooden chopsticks, soak them in water for 1 hour before grilling to prevent them from burning.

While the meat is taking on its delicious flavour in the fridge, you can start making the tzatziki. First peel the garlic and chop it finely. Wash the cucumber, cut it in half and remove the seeds. Then grate the cucumber coarsely and squeeze the shredded cucumber in a kitchen towel. Wash and finely chop the dill. Finally, mix the cucumber shavings with the dill, garlic, olive oil, yoghurt, white wine vinegar, salt, pepper and a squeeze of lime or lemon to make a fresh dip. The tzatziki should chill for at least 1 h before serving. The Turkish equivalent of tzatziki sauce is cacik. Greek and Turkish cuisine share many traditional recipes (and everyone says they invented the recipe).

After taking the meat out of the fridge, put 3-4 pieces of meat on a skewer. If you like onions, you can also alternate meat and onion pieces. In Greece, the skewers are typically grilled, but you can also prepare them in a pan. Be careful: To prevent the meat from burning, just grill them for 3-4 min on each side until they are cooked.
Serve the savoury meat skewers with fresh tzatziki and either tomato rice or salad. For this Greek favorite you can also replace the pork with chicken. 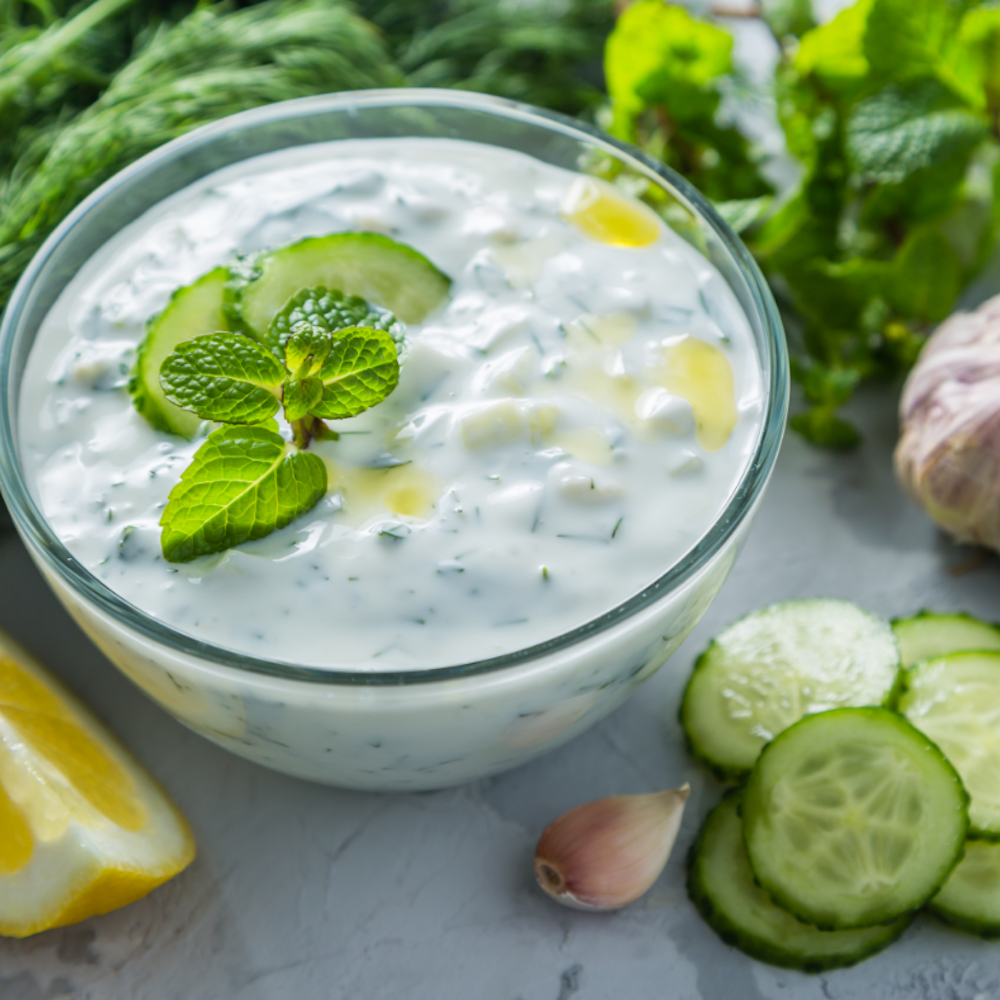 Whether with meat, fish or vegetables – tzatziki is my all time favourite 😉

The classic Greek dish: gyros pita!
The Greeks usually use turkey or pork for their gyros, but you can alternatively use any other meat. The dough is enough for 4-5 pita breads.

First, cut the turkey (or chicken) meat and the onion into strips. Then put the oil in a bowl with the spices, garlic, lemon and mustard. Add the sliced meat and onion and leave to marinate, covered, in the fridge for at least 3 hours.

Now you can turn to the original Greek recipe for homemade pita bread. First, dissolve the yeast in the water in a large bowl. Then add the flour, oil and salt and knead everything into a firm dough. Place the dough under a kitchen towel and let it rise for 1 hour. Then it is formed into a 2 cm thick roll and cut into 1 cm wide slices. Roll the slices into balls and leave them covered for another 10 minutes.

In the meantime, you can take the meat out of the fridge, as it should not be ice cold for 15-20 minutes before cooking.
Now roll out the pita dough balls into 0.5-0.7 cm thick slices. On a greased, floured tray, leave the pita breads in the oven at 250 °C for 8-10 min. When they puff up, they get their typical shape.
Now it’s time to turn on the cooker! You can sear the meat in a pan without any additional oil. Tip: Fry the meat in portions so that nothing burns.

Finally, fill the pita breads with the meat, salad and vegetables of your choice. The Greek dish tastes best with a blob of freshly made tzatziki from the previous recipe. 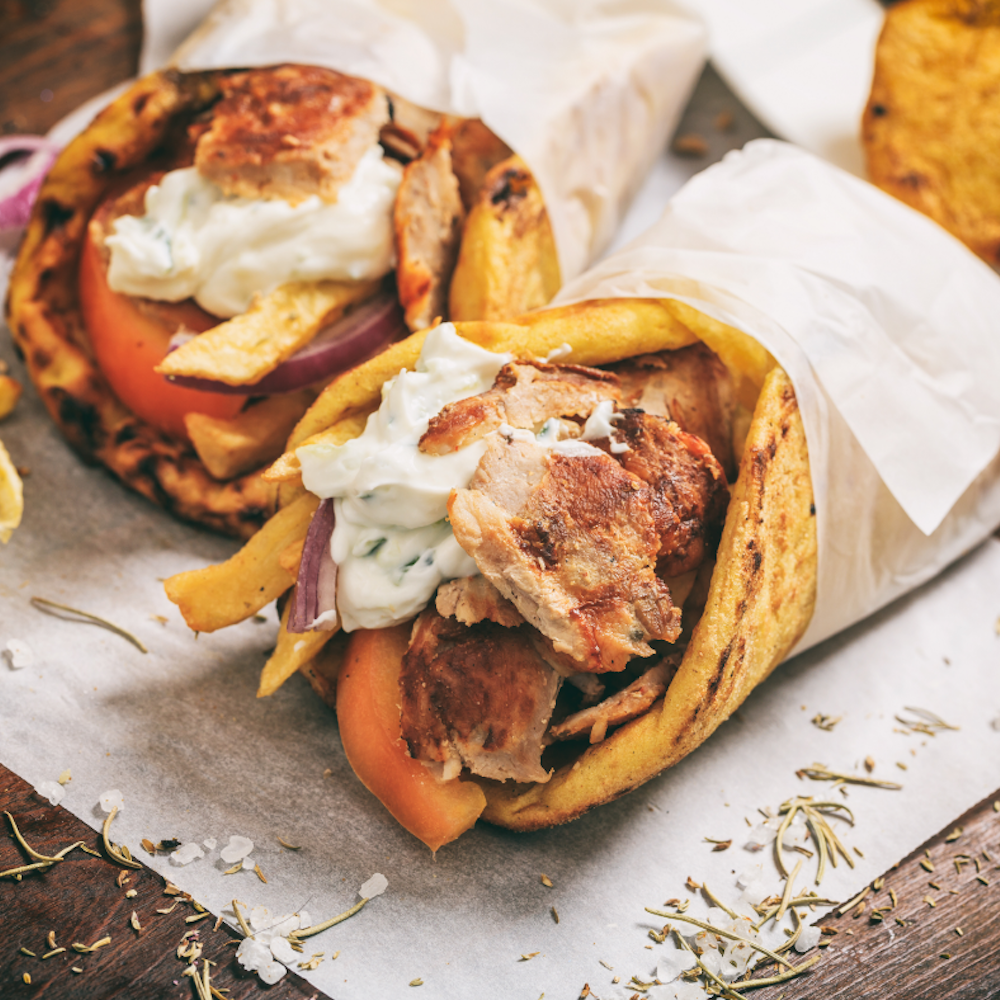 The delicious, fresh Greek farmer’s salad, hariatiki salata in Greek, is especially good for a light lunch and not only on hot days. Traditionally prepared according to a Greek recipe, it is made with juicy tomatoes, cucumber, peppers, olives, feta cheese and olive oil.

Ingredients for the dressing:

Ingredients for the salad:

For the dressing, mix olive oil, lemon juice, a little oregano, salt and pepper. Then drizzle the feta cheese with a little olive oil and oregano and cut it into bite-sized cubes. Then chop the washed vegetables. Finally, mix all the ingredients in a bowl and pour the dressing over them. That’s it! 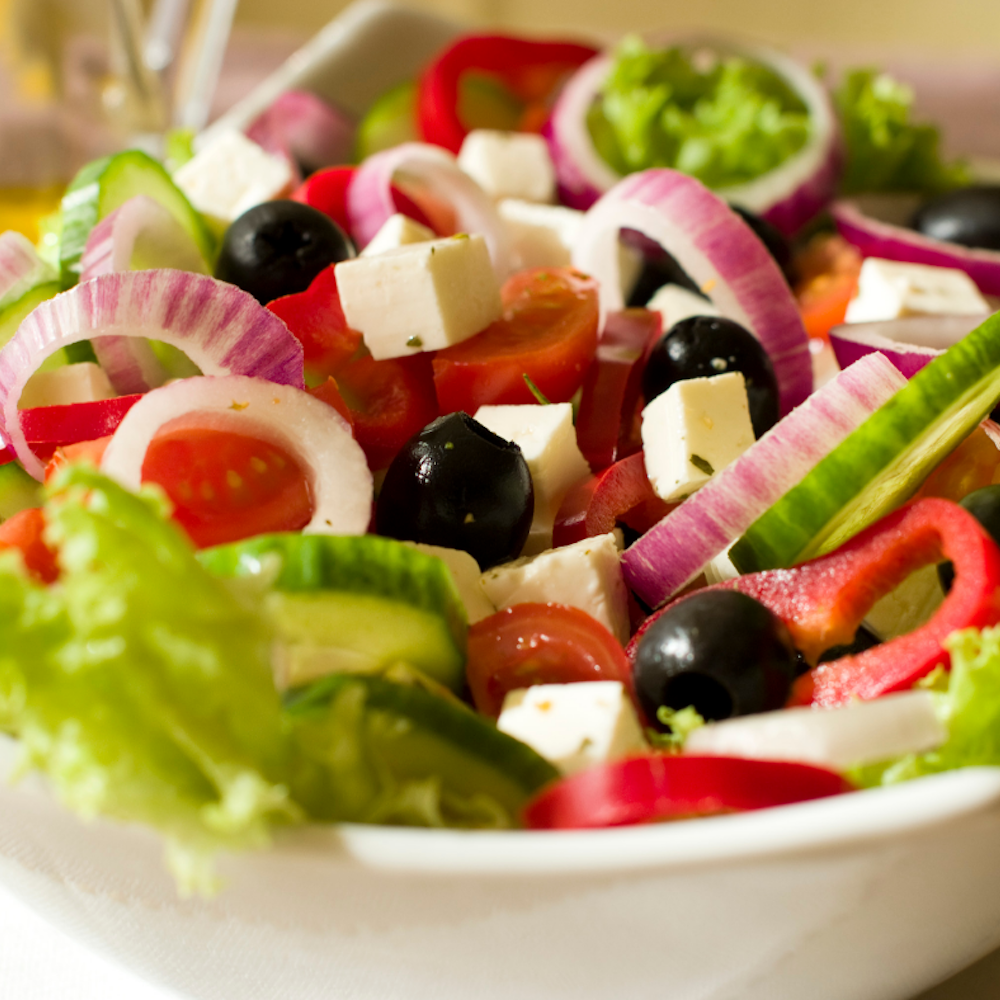 This is my favourite greek recipe and a family favourite! This delicious, warm and spicy aubergine casserole with potatoes, tomatoes, minced meat and delicious sauce makes enough for 4 servings.

First, wash the potatoes and boil them in water for 20 min. In the meantime, the aubergine is washed, sliced, lightly salted and left to soak for 15 min. Next, the peeled onion and garlic cloves can be finely chopped. After the potatoes have been boiled and rinsed in cold water, blot the aubergine slices, brush with oil, fry in a pan until golden brown and season with pepper. Then fry the minced meat with the onion and garlic and add the chopped tomatoes to the pan. Let the whole thing simmer for about 5 minutes. Season the meat with fresh chopped oregano, salt, pepper and cinnamon. The meat is ready! Now slice the peeled potatoes and the washed tomatoes. Then prepare the sauce.

To do this, sweat the flour with 2 tablespoons of melted butter in a pot. Then add the milk, water and stock, season with salt and pepper and simmer for 5 minutes. Then whisk the eggs and first mix them with 4 tbsp of the sauce before adding them to the rest of the sauce.

In the greased casserole dish, first layer the potato slices, then alternate the tomato mince and the aubergine and tomato slices. Then pour the sauce over the casserole and sprinkle with Parmesan. In the preheated oven at 175 °C convection oven, only about 40 minutes separate you from enjoying the finished moussaka! 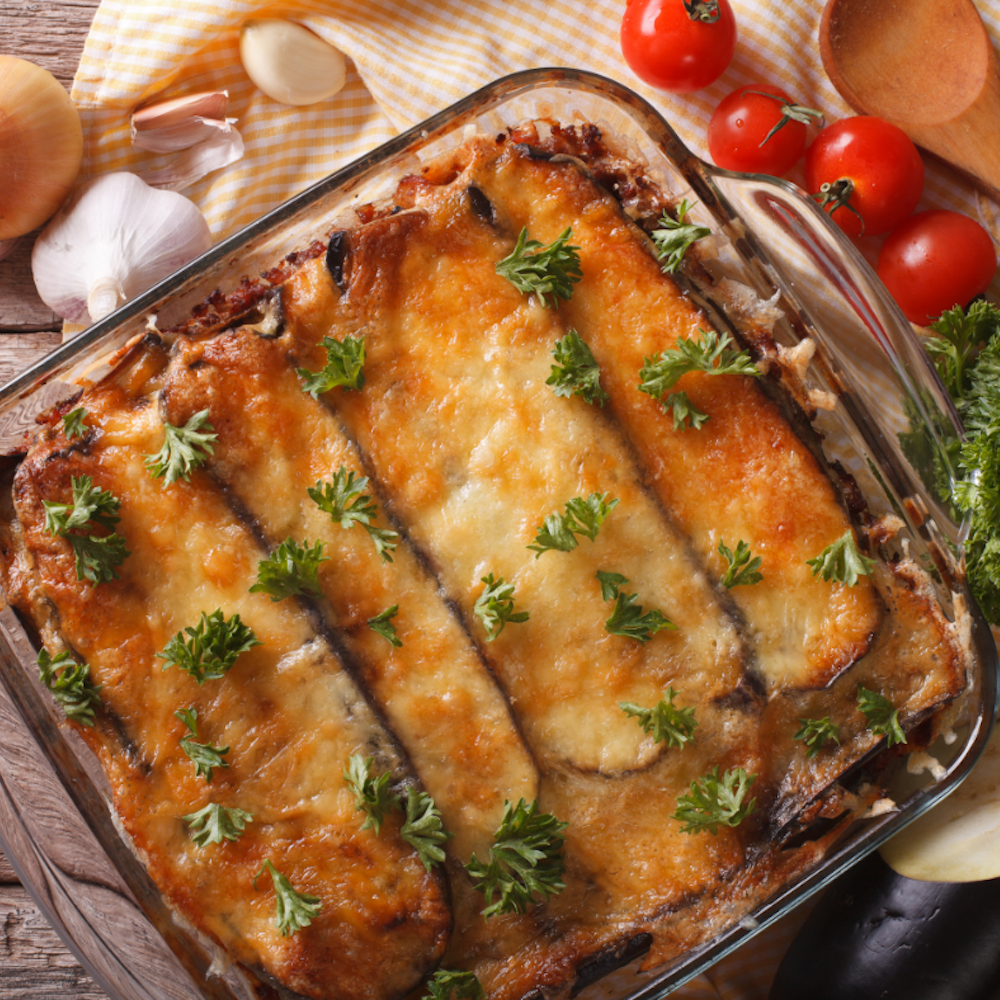 A must for all those who love casseroles and cheese: Moussaka!

Last but not least, I want to show you what sweet treats Greek cuisine has to offer: The delicious Greek yoghurt harmonises perfectly with aromatic nuts and sweet honey. The simple recipe is enough for 4 people – but it can be made quickly if you need more 😉

First, toast the nuts in a pan without adding any oil. Next, take the pan off the heat and let it cool down. Now mix the yoghurt with the vanilla sugar and lemon juice. After chopping the nuts, layer the yoghurt with 1 tablespoon of honey and the nuts in 4 glasses. It looks great when the nuts and honey are added last 😉 #foodporn 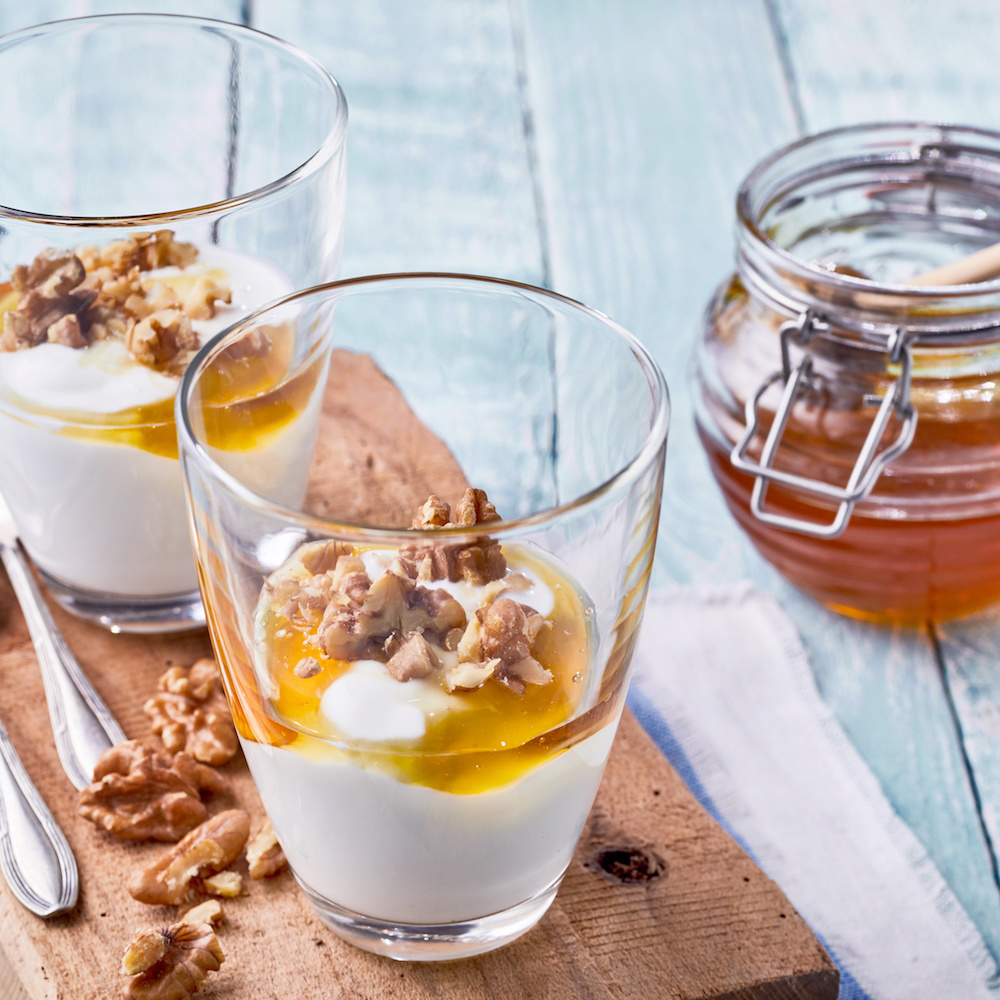 Perfect as a dessert: Greek yoghurt with honey and nuts – Adobe Stock, © exclusive-design

If wanderlust does get the better of you, TUI BLUE hotels on 8 Greek islands with over 20 hotels will provide you with country-specific delicacies and satisfy any craving for delicious Greek specialities.

Before you book your next dream trip, tell me in the comments what your favourite Greek cuisine dish is. 😊
Enjoy cooking and bon appétit! Or if you want to practise your Greek: Kalí órexi!