The Five Most Beautiful Beaches in the Algarve

01 Sep The Five Most Beautiful Beaches in the Algarve

Portugal, your beaches! God must have been in a holiday mood when he created the beaches of the Algarve, because he made 107(!) of them and each one is breathtakingly beautiful. Honestly! If you don’t believe me, you can read about it yourself in this blog post, where I list my top five favourites.

Skeptics will say that a beach is a beach is a beach, that the Algarve is no exception. But it is! Even for people who just see beaches as sandy sections of coastline, the 155 kilometres of beaches in the southernmost province of Portugal are sure to open their eyes. The Algarve is one of the most diverse areas in the country – there’s a reason that our TUI BLUE Falesia is opening in the region soon. The pride of Portugal extends from the western coast, near the Praia de Odeceixe, to the border with Andalusia in the east. When it comes to beaches, no one does it like the Portuguese – even the locals cherish some of these hotspots.

The Beaches of the Algarve: Incomparably Beautiful

In the Rocky Algarve between Sagres and Vale de Lobo, you’ll find some of the most beautiful beaches in the world, provided you have a boat or good swimmers with you. Many of the small, excellent beaches are accessible only by water and at low tide because they’re surrounded by impenetrable limestone and sandstone cliffs.

Finally, there’s the Sandy Algarve, which describes the section from Vale de Lobo to Rio Guadina. The beaches in this area are so long and wide and sandy that you might think you’re going through a desert, if not for the glittering Atlantic with its crystal-clear water. The distinctive dunes really add to that feeling. At the same time, however, there are also the unique islands just off the coast, which are part of the nature reserve Ria Formesa between Faro and Manto Rota. There are some fantastic beaches here and the water that surrounds the islands is even a few degrees warmer than it would be in the west – perfect conditions for swimming in the Atlantic.

Some of the beaches in the Algarve are especially ideal for water sports, while others attract nature lovers and sun bathers looking for rest and relaxation. Everyone is guaranteed to find a dream beach – a consideration I made while compiling this list. The selection is more than ample! These are my most beautiful beaches in the Algarve:

For windsurfers, sailors, kitesurfers, and those who want to ride the roaring waves or air currents off the western coast of the Algarve, this beach is heaven. The strong wind on the steep coast is always dependable. The beach is bordered by the river Ribeira de Seixe, which lets you swim in fresh water as well as do some relaxing paddling. For water sports enthusiasts, the Praia do Amado is also an attractive option where exciting surfing contests are held regularly. 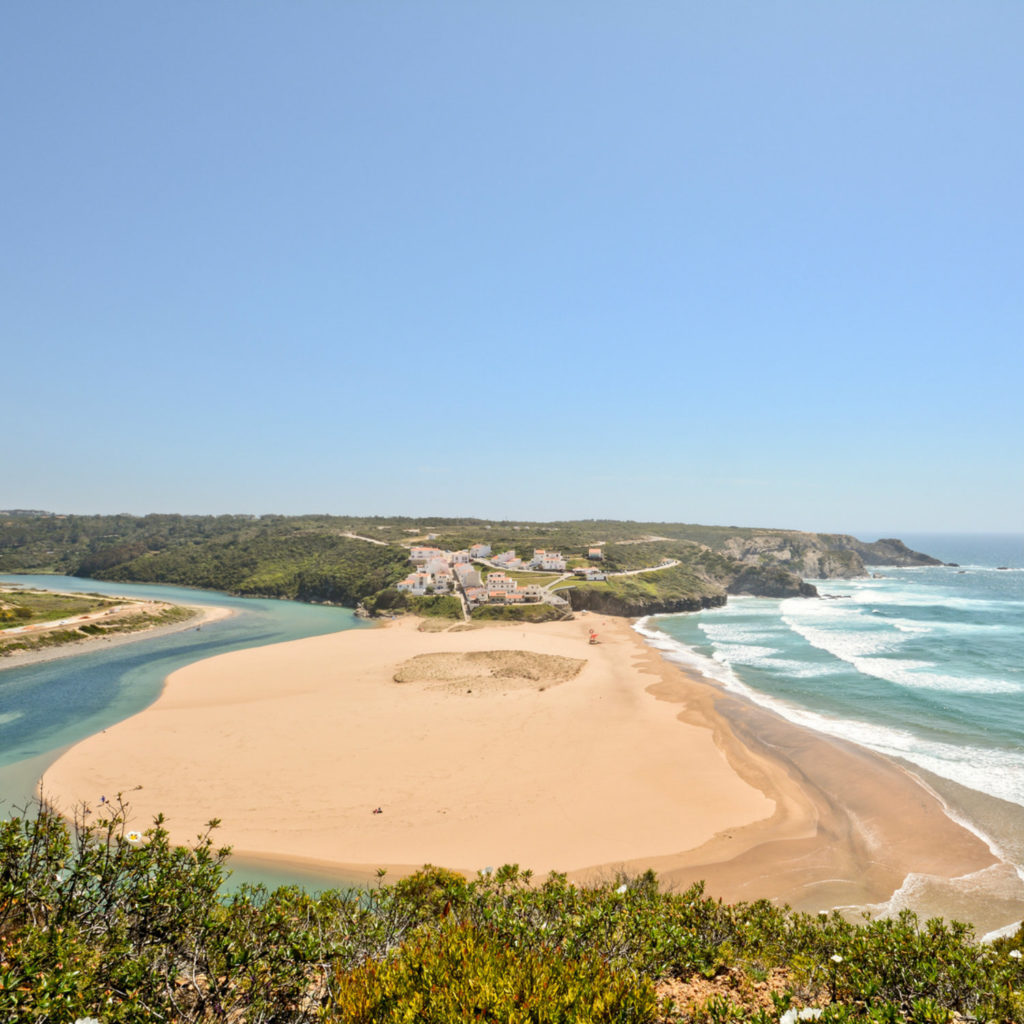 An absolute contrast is the Praia da Figueira. This natural beach in the Algarve can only be reached after an easy kilometre-long walk through a green valley where fig and olive trees grow – the path has an incomparable aroma. The effort pays off: the Praia da Figueira is a natural jewel and the right choice for you if you’re looking for a little seclusion and tranquility far away from mass tourism. 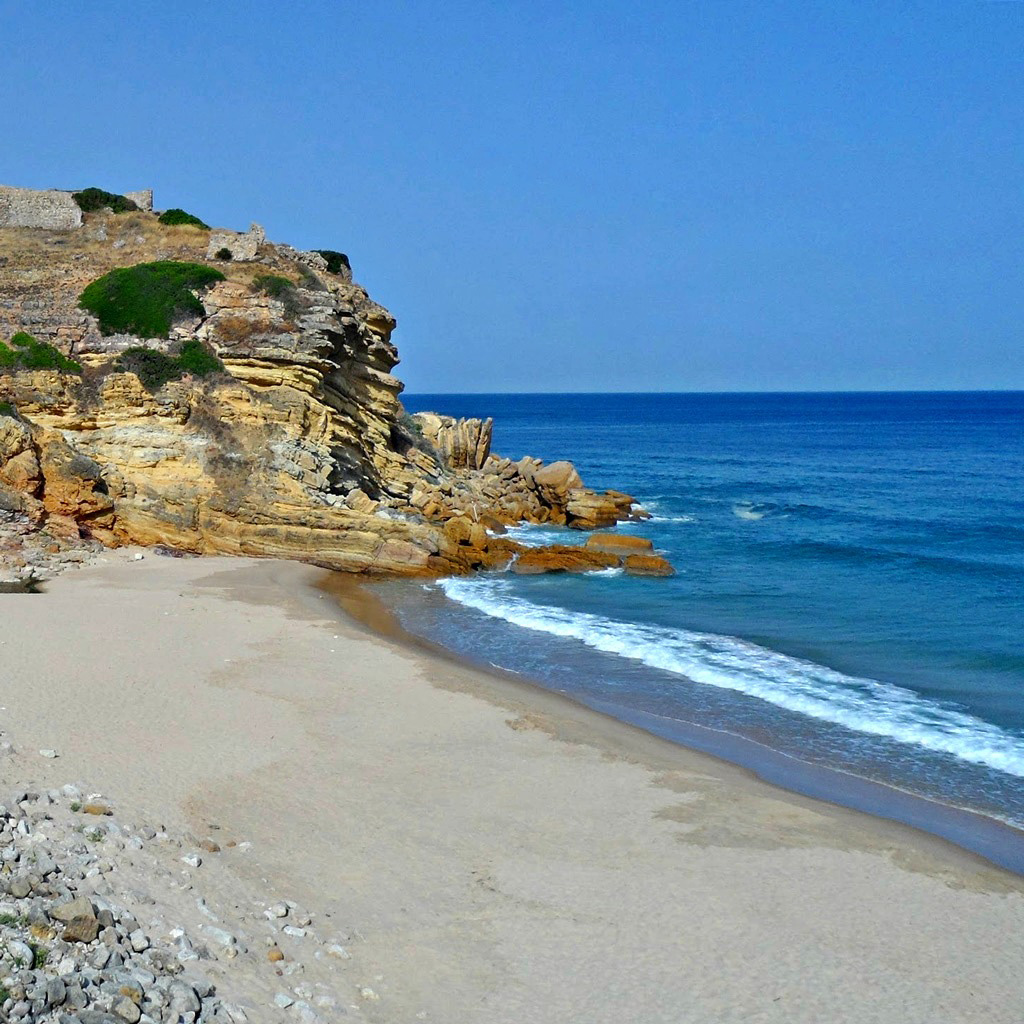 Based on the name, you probably realised that the Praia da Falésia is right on the doorstep of the new TUI BLUE Falésia in the Algarve; it also provides you with approximately six kilometres of open space for various activities. Beach volleyball and soccer, jogging in the early hours of the morning, a romantic stroll in the evening, or just relaxing – here, everyone gets to do what they want. The beach, which is divided into two sections – Açoteitas and Alfamar – is quite a charming spot for water sports, especially for surfing beginners like me. Here’s a special tip for you: The Praia da Falesia is known for its ochre and pine-covered cliffs, which are a visual highlight during the day. It’s really romantic if you wait until the evening — the rock walls glow red in the sunset. Spectacular! 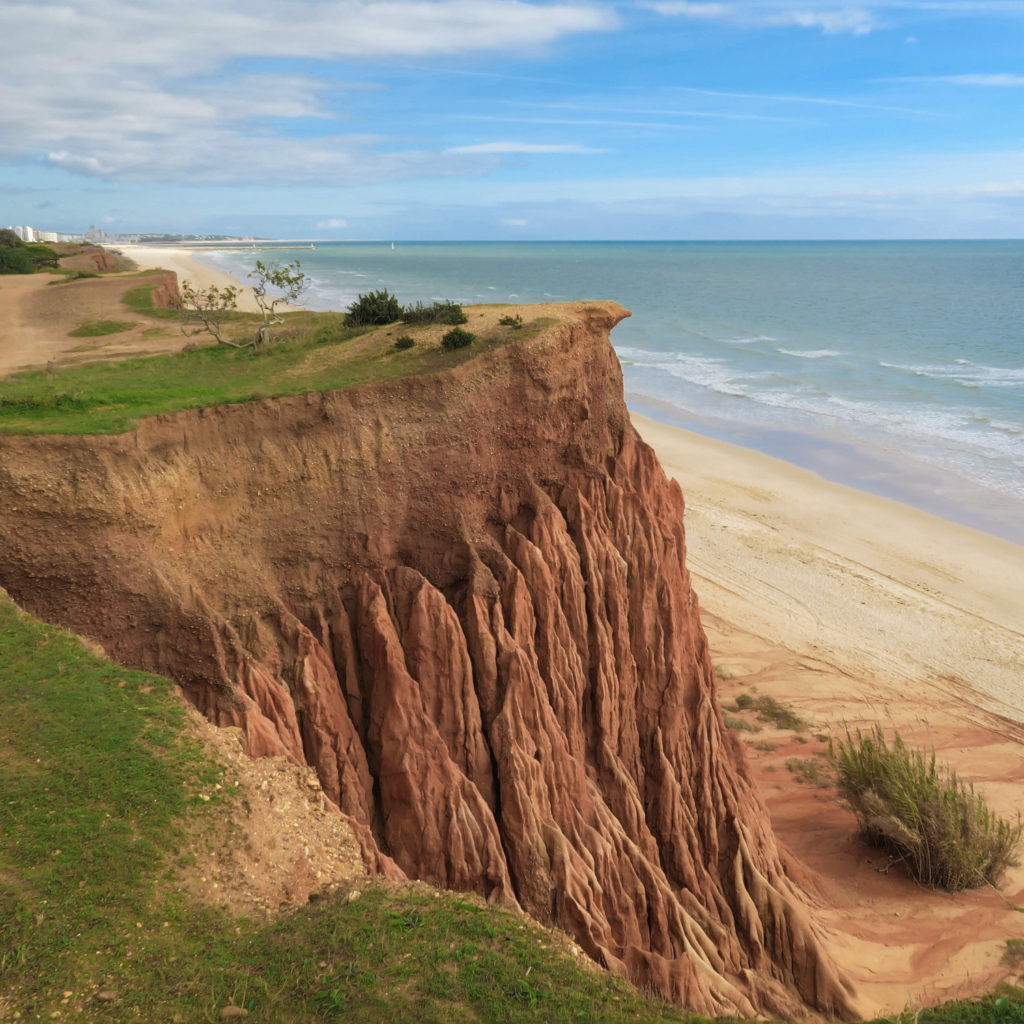 The Praia da Falesia with the characteristic red cliffs

The name of this beach also reveals its offerings: the Praia da Marina is located right at the posh boat and yacht port. Being very close to the city, this beach is great for those who, like me, love shopping. Yes, I admit it! Additionally, you’re in the best hands if action and fun are important to you. Summer dance hits boom from the speakers at the beach bars while a water course challenges beach babes and dudes. Frankly, I think it’s also totally exciting to look at who’s on the expensive yachts – you never know. In general, the Praia da Marina is a good place to meet new people and explore tourist hotspots like bars and clubs. 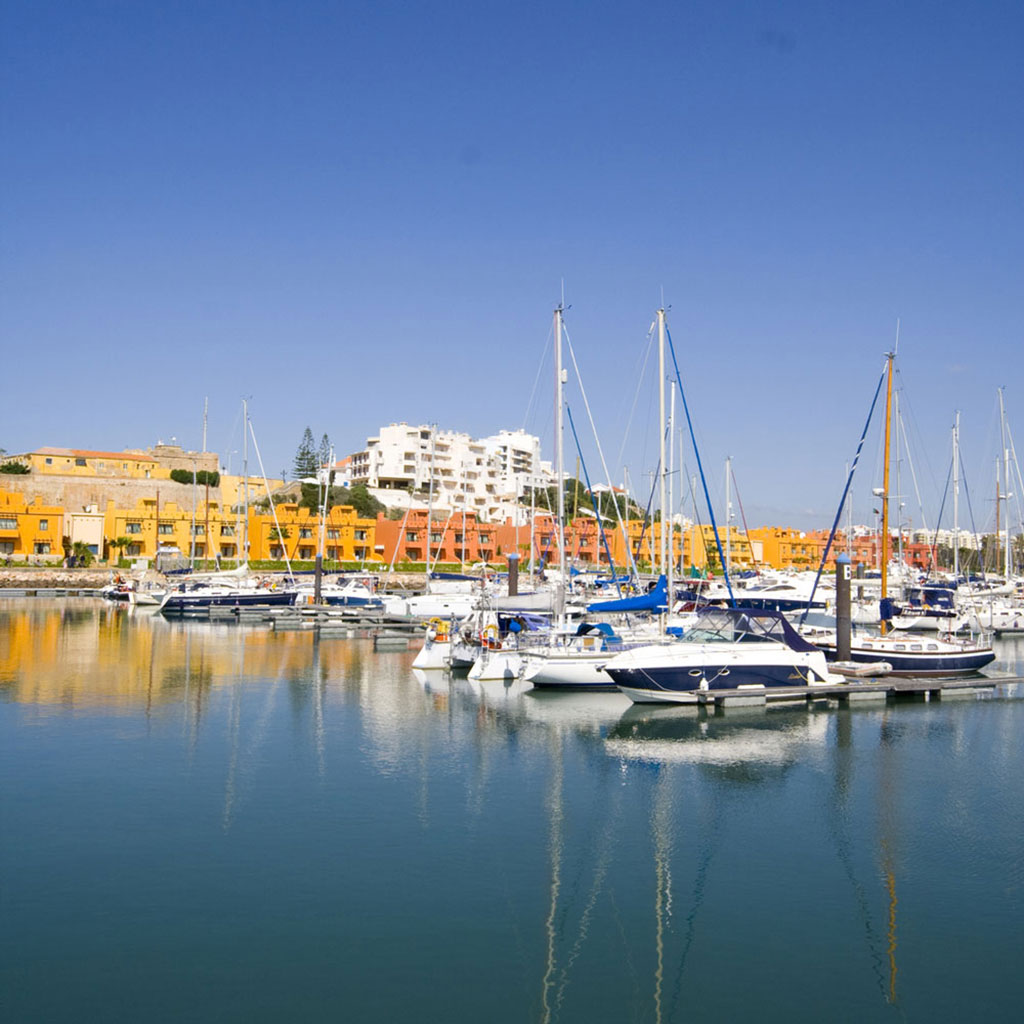 The marina in Portimão in the immediate vicinity of the beach © objecto anónimo – fotolia.com

This is not to be confused with the similar sounding Praia Marinha, by the way. There, bizarrely shaped rocky caves and gorges are waiting for intrepid snorkelers. The rock formations that emerge from the water are regarded as fascinating gathering places off the Algarve coast for a rich diversity of marine life and plant species. 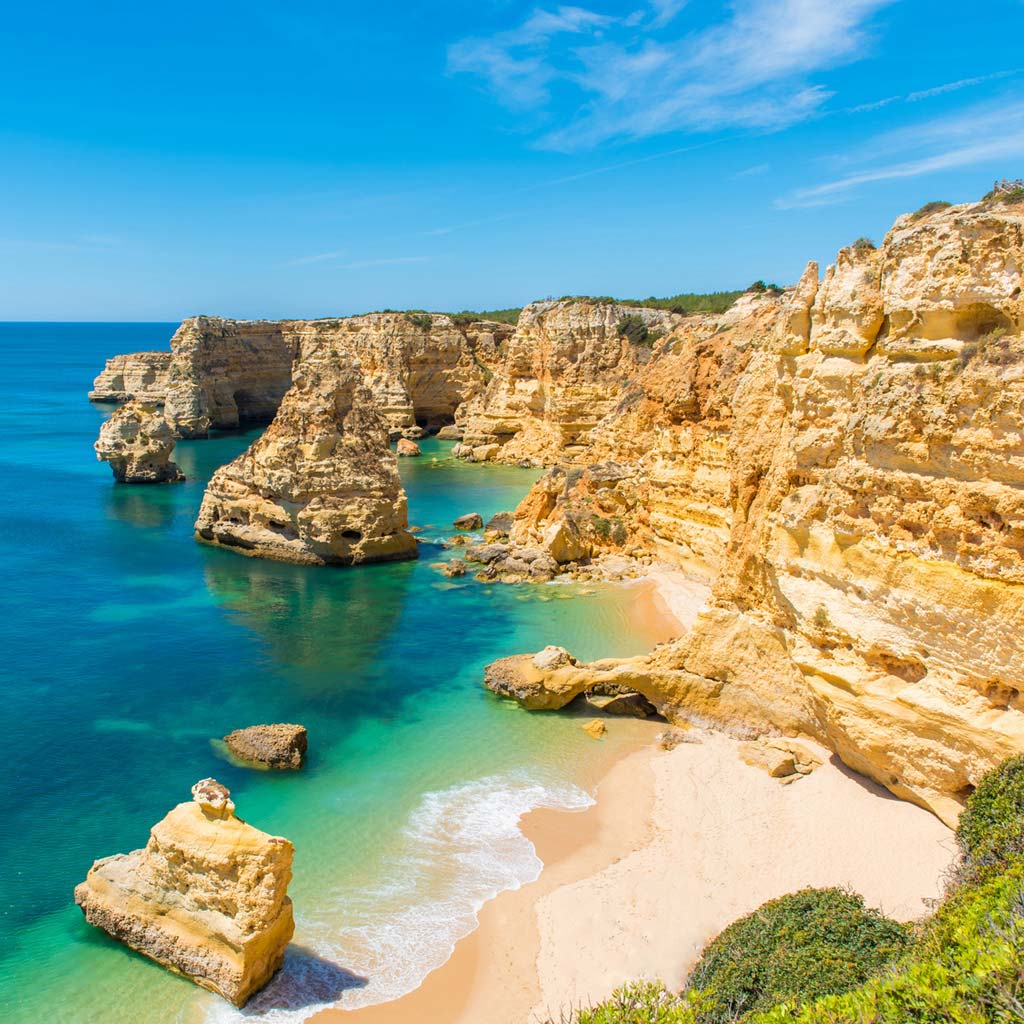 The Praia de Benagil is considered a hotspot for spelunkers because it’s home to one of the most famous caves in all of Europe. The “Benagil Sea Cave”, however, is tucked into the rocks and is only visible from the water. At low tide you can easily swim to the entrance of the cave; the route is just under 100 metres and can be done in just a few minutes by a decent swimmer. After that, you can explore the cave on foot and see the impressive light shows that come in through the hole in the ceiling to play on the cave walls.

The sea at Praia is de Benagil is relatively calm compared to other sections of the coast, and is therefore perfectly suitable for stand-up paddleboarding, kayaking, or a trip on a paddle boat. Even hikers get their money’s worth here: a coastal trail between the eponymous fishing village of Benagil and Marinha Praia offers breathtaking views. 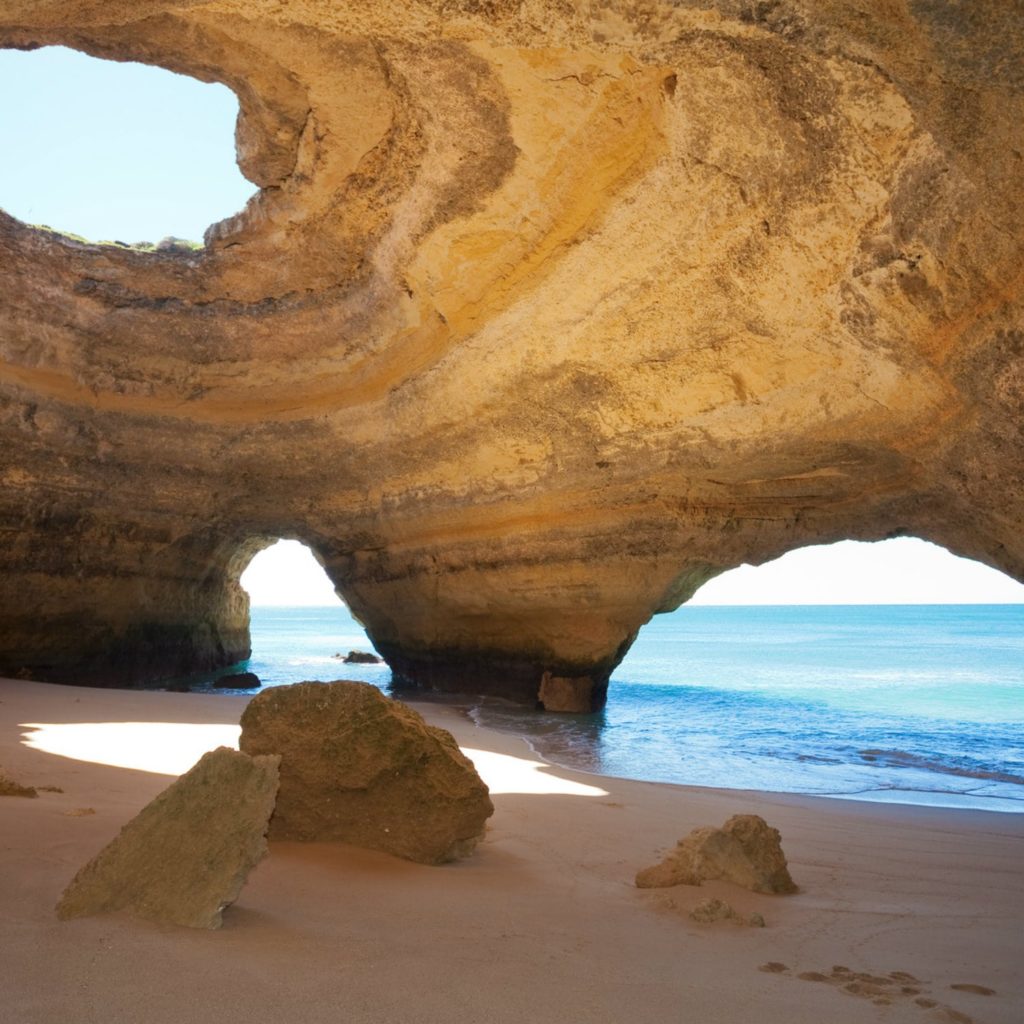 A roof made of rock on the Praia de Benagil © tagstiles.com – fotolia.com

Was your dream beach on the list? Even if it wasn’t, you have the opportunity to explore the 102 other beaches in the Algarve during a holiday at the TUI BLUE Falesia. Wherever you finally dig your toes in the sand, we wish you the best!