5 insider tips for holidays in Sarigerme

New year, new (holiday) happiness! For me, and probably many of you, the beginning of the year is synonymous with holiday planning. It offers the opportunity to explore possible destinations in detail and figure out your holiday dreams. Last year at this time I had one goal above all: holiday in Sarigerme in the Turkish Aegean. From my time there, I brought back 5 insider tips, which may also give you the decisive impetus for a holiday in Sarigerme and make your holiday planning that much easier.

1. I think I’m standing in a village…

…and that’s exactly where I wanted to be. In my opinion, there is no better place to get to know the country or people than here. Basically, Sarigerme is a natural place that is characterised by vast rolling hills, pine forests, and cotton fields. The picturesque mountain villages fit perfectly into this idyllic, wildly romantic image. It’s quaint and cosy here – no trace of hustle or bustle. Hospitality is, as is usual in Turkey, emphasised. On your tour of the surrounding villages, you will more than once hear the invitation to drink tea from the fine little tea glasses. The nearby villages such as Sarigerme Village or Osmaniye offer shopping for daily needs, and small souvenir shops, where you will undoubtedly find some little treasure. Here, many of the locals speak English, so it’s easy to communicate with them.

Many shops invite you to browse.

2. Such a mess: mud bath in Dalyan

Anyone who has ever spent the summer months on a Sarigerme holiday knows about the high temperatures of 40 to 45 degrees Celsius. In this case, it was obvious to me to try my luck in the cool waters of the sea, which was not optimal for two reasons: First, because I decided to walk barefoot over the hot sand – very bad mistake! Second, because the sea itself was warmed up to nearly 30 degrees by the heat of the sun. So much for the dream of refreshment and pleasant coolness. When I voiced my sorrow to one of the helpful BLUE Guides in the TUI BLUE Sarigerme Park, where I was staying, he gave me a very “dirty” tip: a visit to the mud bath! Tourists are drawn to the large mud bath in Dalyan for this very purpose. However, about four kilometres away there is a smaller mud bath in the town of Köycegiz, popular among the locals who also like to practice this wellness ritual. By the way: Nearby is the turtle beach, Iztuzu, where my colleague Miri made friends with the turtle Sweetie. But that’s another adventure!

The mud basin here is totally unspoilt, and is located directly at the foot of the Ölmez mountain. I covered myself from head to toe with gorgeous, gray-green-brown slush and was happy – as funny as that sounds. The mud-pool professionals gathered lumps of mud from the bottom of the pool with which to slather themselves. Then I dried out together with some other bathers in the sun, where the mud on my skin became very hard and stretched on the skin. Then I could just scrub this off (super exfoliating!) or wash off in one of the adjacent natural thermal springs. I promise you: After a mud bath, your skin feels as soft as a baby’s bottom!

A mud bath is not only rejuvenating for the skin, but it’s also a lot of fun.

For me, a successful holiday is more than the many impressions and experiences of the people and place – I also want to get to know the culinary side. I want to taste where I am! It was no different during my holiday in Sarigerme. At this point, kudos to the kitchen at the TUI BLUE Sarigerme Park are due: The culinary diversity offered and the inclusion of regional products are unique here. So I was able to feed myself without problems like the very hungry caterpillar for a week without ever eating the same things – just fantastic! Nonetheless, I was drawn to the big market in Ortaca to buy spices for my shelf back home. The Dolmus bus to Ortaca runs regularly from the Sarigerme town centre, so getting there was easy. The market in Ortaca is colourful, loud, and lively. At each stall, the contents of the wallet are traded, and the smell of juicy, fresh fruit and vegetables, spices and tea, sweet desserts and other Turkish specialties temptingly swept across the square. In the end, I took a small selection of spice and herbal mixtures and a small glass of fir honey. This is made in Marmaris according to a traditional recipe and tastes delicious – my shopping tip for your holiday in Sarigerme. You’ll also find that pomegranates are a regional staple, and are grown on vast fields. When driving from Dalaman Airport towards Sarigerme, you can already see the fields with the red shining fruits. 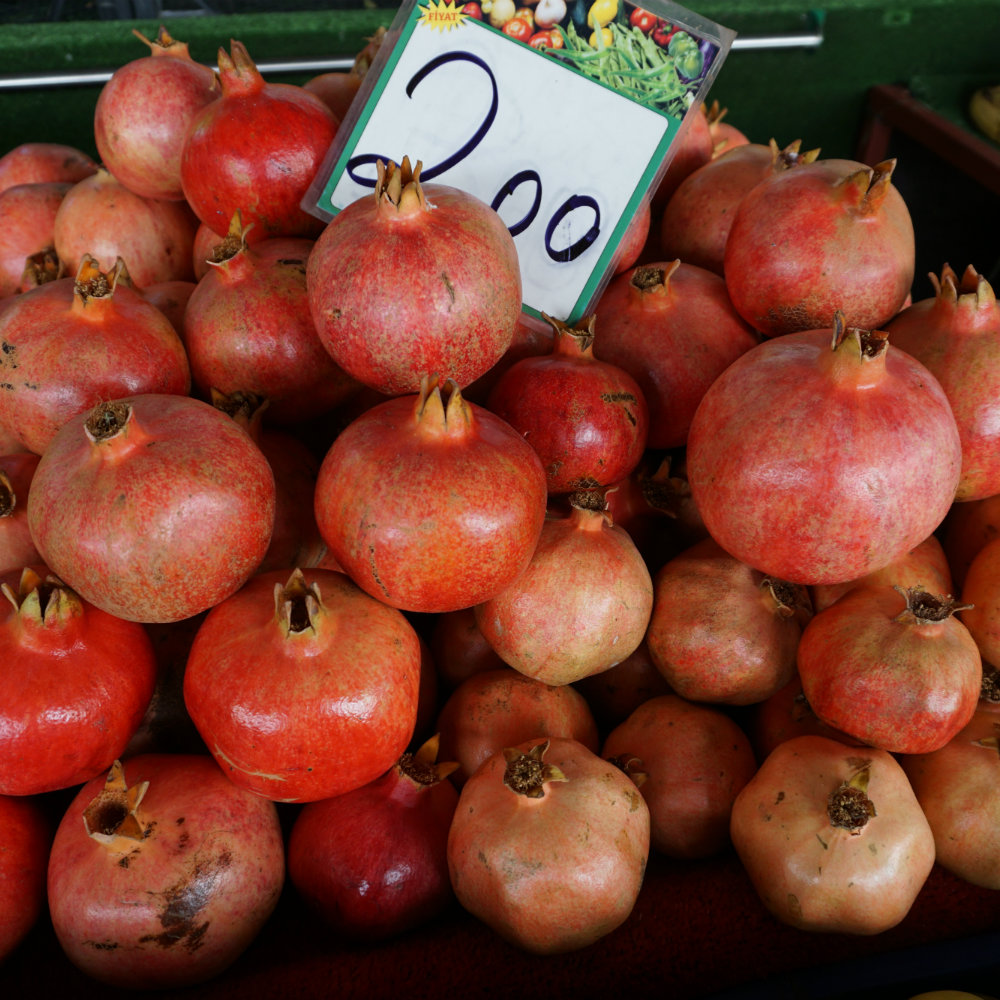 You just have to try one of the delicious pomegranates.

4. Visiting the mosque in Osmaniye

This point on my list is probably the “most touristy”. Nonetheless, I wanted to get to know the Mosque in Osmaniye during my holiday in Sarigerme out of interest and respect for the Turkish culture. However, you should be aware of some things when going to these or other mosques. This includes taking off the shoes in front of the entrance and wearing appropriate clothing, especially for women. Wear a floor-length skirt or pants, and be sure to cover your hair and shoulders, and you’ll be good to go. Avoid visiting during the prayer times, unless you yourself come to pray. If you are there at such a time, you should behave calmly and respectfully, and sit down in a suitable place. For women, there is often a separate area; if that is not the case, sit behind the men. It is a faux-pas to stretch out your legs in the direction of prayer, or to walk in front of a praying person. Once you’ve found your place, you can absorb the impressions quite consciously – I was personally touched by the sight of the praying people, even if I could not understand the few spoken sentences. Another tip: If you want to take a look at the Koran or the calligraphy of its verses, this is quite possible – though touching or placing the scriptures on the ground is prohibited.

The mosque in Osmaniye from the outside.

It’s worth it to look up – beautiful ceiling paintings adorn the mosque.

5. Pure culture on holiday in Sarigerme

Turkey is rich in cultural treasures – and the region around Sarigerme is no exception. The first thing I did on my holiday in Sarigerme was to head towards Kayaköy – a good one hour away – which is considered a ghost town. The place has an eventful history: first inhabited around 3000 BC, a lively port town was established here in ancient times. In the 18th century, on its ruins, the town of Levissi was built, which was later populated by various people groups. Today, some 3,500 surviving ruins can still be found in the UNESCO World Friendship and Peace Village; and this title alone is reason enough to have a look at the museum city, right? Other hotspots for fans of the ancient world include the 3,000-year-old city of Kaunos and the Lycian rock tombs – the latter is best viewed from a boat that takes you through the Dalyan waterscape. Last but not least, Sarigerme itself was built on the remains of the city of Pisilis; some traces of it are still to be found today in places. 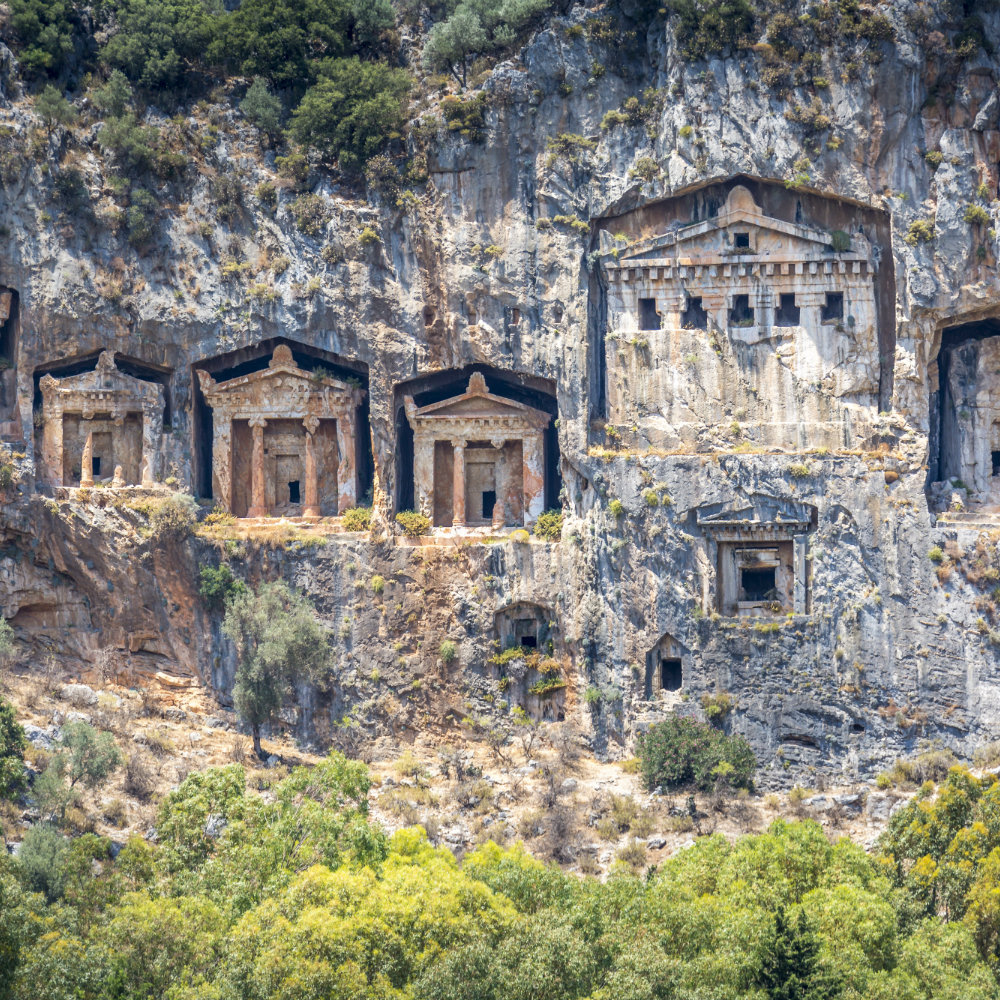 Kayaköy impresses with its ancient ruins.

There you have it – my 5 tips for your trip to Sarigerme, which will hopefully help you to create lasting memories and unforgettable holiday moments! Write in the comments: what are your tips for the region in the Turkish Aegean – I’m curious!

We also have the right hotels for you: TUI BLUE Sarigerme Park for families, couples and singles, TUI BLUE Tropical for families and TUI BLUE Seno only for adults.