Discover the top 10 sights in Cádiz

The first rays of sunshine in the early morning make the charming little port city of Cádiz on Andalusia’s Costa de la Luz shine with light. Today I’m taking you on a journey through time in Europe’s oldest city, which was probably founded by the Phoenicians as early as 1,104 BC. Full of Spanish culture and history, Cádiz has some interesting sights to explore.

Picturesquely situated on a headland, the city is surrounded by turquoise blue sea – this makes your holiday in Cádiz a very special experience. Not only does the picturesque setting contribute to the unique flair of the city, you can also combine your sightseeing trip with a visit to the beach.

I checked in at the TUI BLUE Playa la Barrosa in Cádiz and now tell you which top 10 sights you should add to your holiday list. #visitcadiz

Surrounded by the sea – the old town of Cádiz

Let’s start with the charming old town of Cádiz. Situated directly on the headland, the old town is almost completely surrounded by the Atlantic Ocean and therefore stands out among all the cities in Spain.

The narrow streets, through some of which not even a car would fit, and quaint houses make the area authentic and original. Heavenly smells come from the Mercado Central de Cádiz, the daily market in the middle of the old town. Here you can sample fresh fruit, vegetables, seafood, meat and other delicacies and watch the hustle and bustle. Coupled with the fresh breeze of the salty sea water, the flair of the city is simply fantastic. 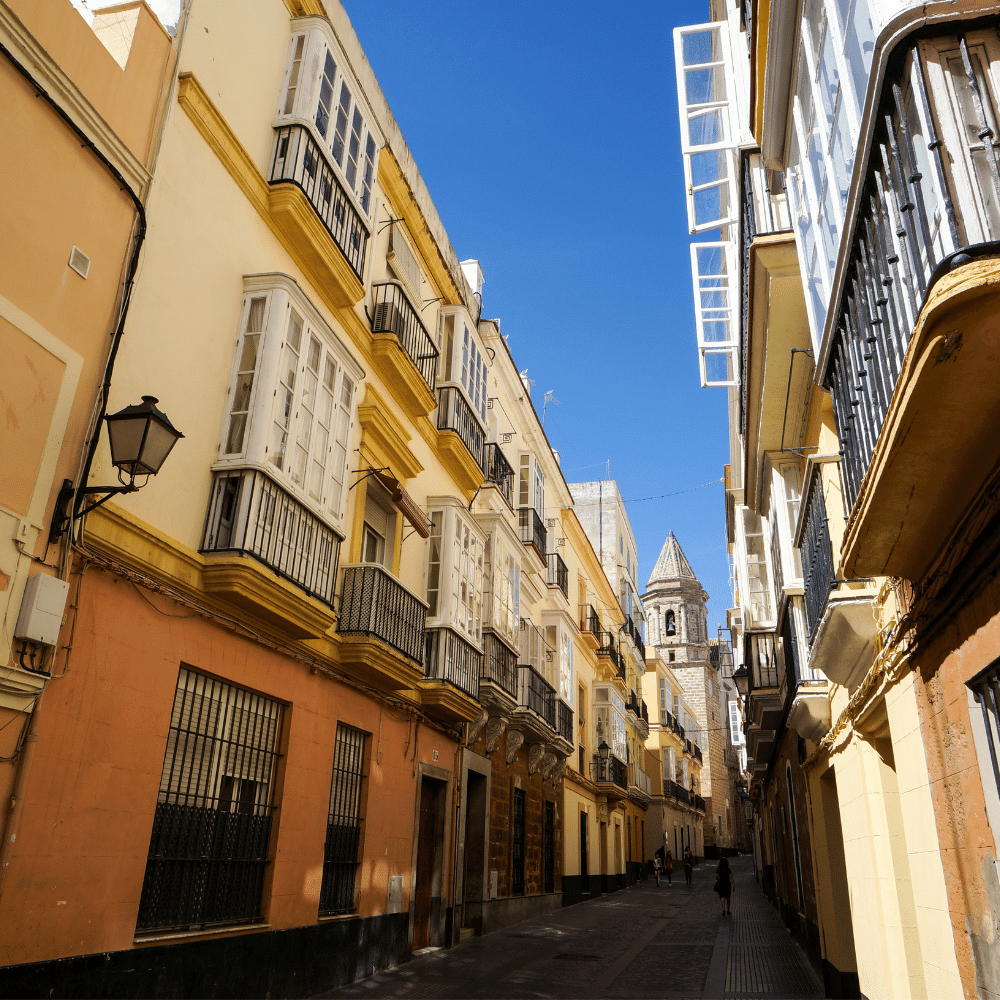 The alleys of Càdiz exude their own charm

In the old town, you will always come across beautiful squares. I particularly like three of them, which is why I would like to recommend them to you.
The first of the three squares is the Plaza de San Juan de Dios, which is located directly at the harbour. In the 16th century, it was the city’s main square, where people were busy, trading and gathering. Today, the square is still the meeting place of the Gaditanos, as the inhabitants of Cádiz are called. If you also make a stop here on your holiday, you can see the impressive town hall and the church of San Juan de Dios at the same time.

The Plaza de las Flores has a wonderful smell of fresh flowers, because, as you might have guessed, there are lots of flower stalls here. The buildings surrounding the square are also architecturally worth seeing. By the way, the market hall of Cádiz is also in the immediate vicinity.
The next sight I visit during my holiday in Cádiz is on the Plaza de España – the Monumento a la Constitución de 1812. The monument was built to commemorate the 100th anniversary of the first written Spanish constitution, which was proclaimed in Cádiz on 19 March 1812. 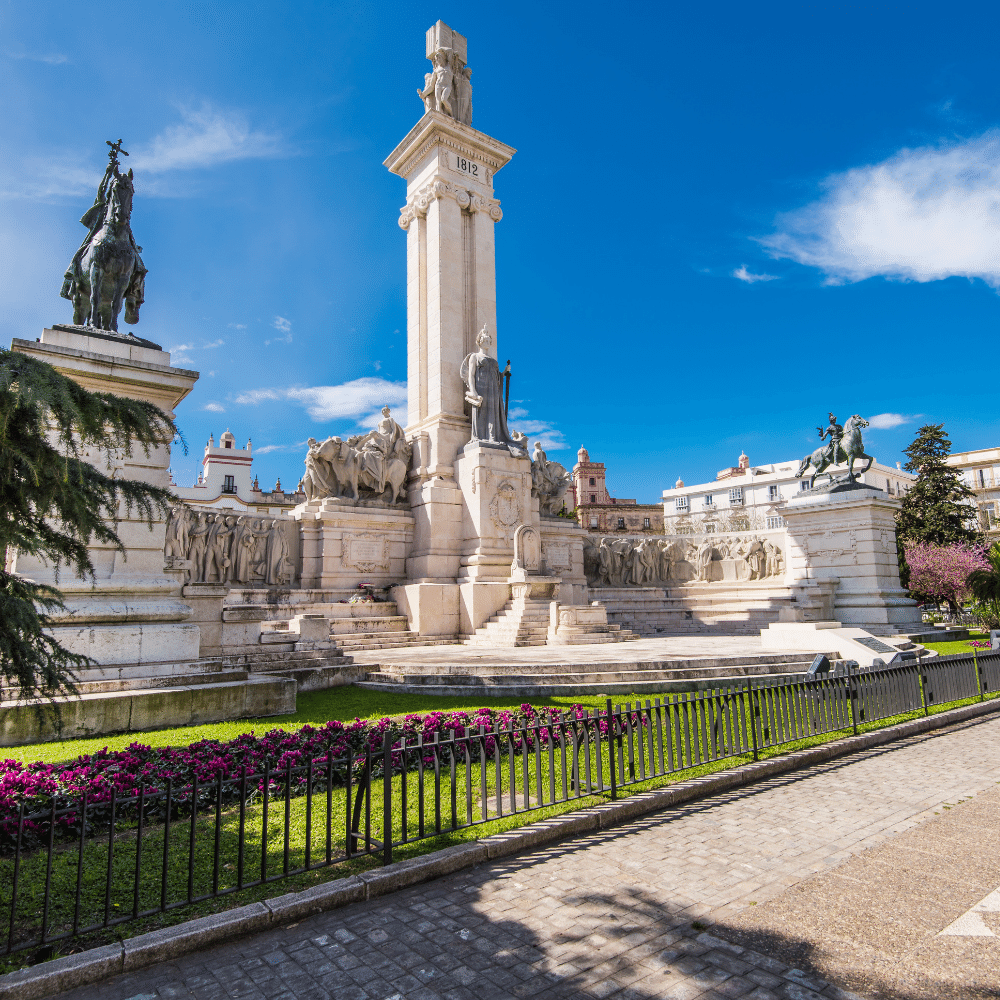 I really like the monument to the 1812 Constitution and the surroundings around it.

Want to cool off? The beaches of Cádiz

Let’s go to the beach! Of course, the beaches of Cádiz are also on my list of top sights.
I definitely recommend a visit to Playa De La Caleta, which you basically can’t miss when you’re sightseeing in Cadiz. It is located between two sights that you will find later on my Cadiz list: the Santa Catalina Fortress and the San Sebastián Fortress.

However, it can get quite crowded here – especially at lunchtime. If you prefer a quieter beach for your holiday in Cádiz, I recommend Playa Santa Maria Del Mar. I’m really impressed by how long the beach is – I don’t see an end to it. The perfect beach for long walks!

Relaxing on the beach is a must on your holiday in Cadiz, but even if you’re coming for a day trip, I’d advise you not to forget your swimsuit. A little cooling off in the sea during your sightseeing trip is simply good for you. For me, it’s also pure holiday feeling! 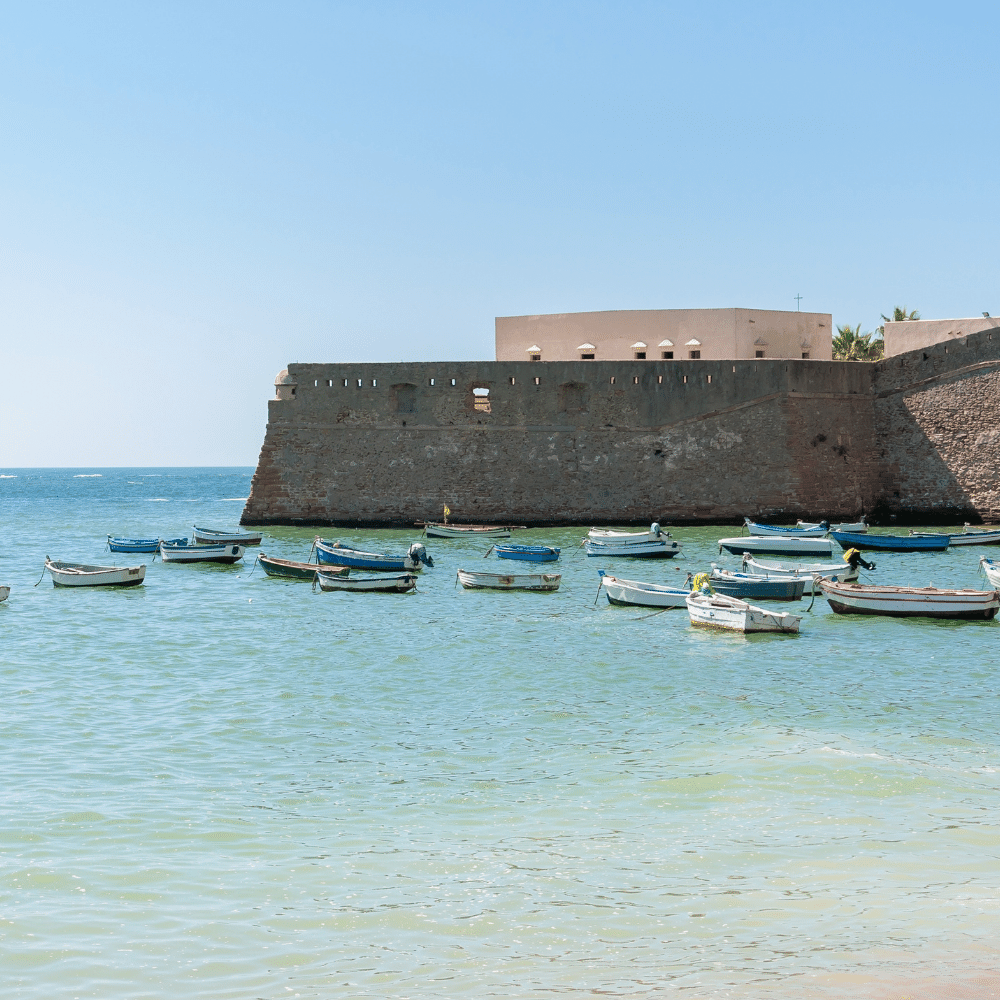 The clear, turquoise sea at Playa De La Caleta invites you to swim.

In Andalusia, the art of flamenco is part of the tradition. If you want to see an original flamenco show or other music, dance or theatre performances on your holiday in Cádiz, then the Gran Teatro Falla is the place to be. This is where the cultural centre of Andalusia takes place and guests from all over the world come here to see the varied programme. The building was one of the first in Spain to be built in the Oriental style, which is why it is also one of the most famous sights in Cádiz from an architectural point of view. 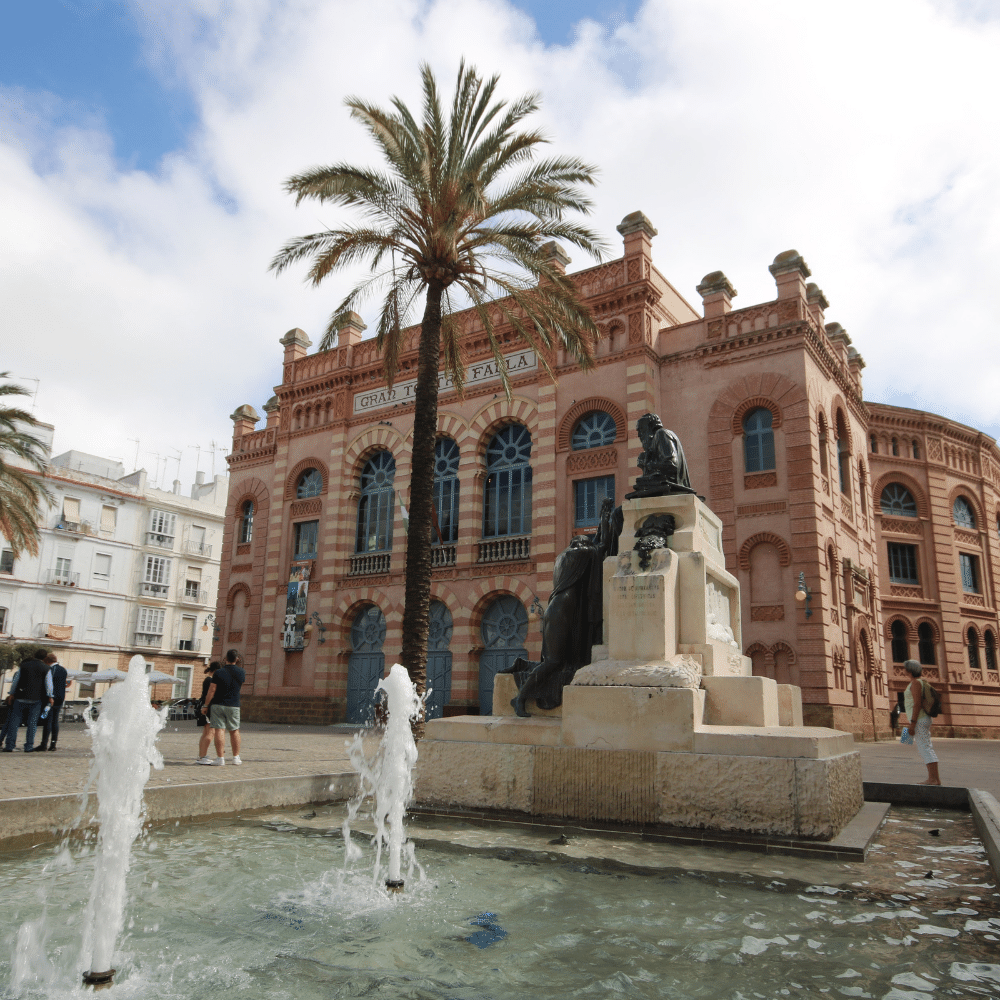 The Star of Cádiz – the Fortress of Santa Catalina

The Castillo de Santa Catalina is a fortress from the 16th century, which you will find adjacent to Playa De La Caleta. Even though there is not much to see here, for me it is one of the top sights of Cádiz. You can visit it and also see various art exhibitions. I find its shape very interesting: it was built in the shape of a star. Even though I admittedly could only really see it from the map view, I have never seen this before in any other fortress. It’s also the perfect place to take photos for your social media accounts, as the fortress is right by the sea and the bright blue makes a wonderful backdrop. #cadizfornia. 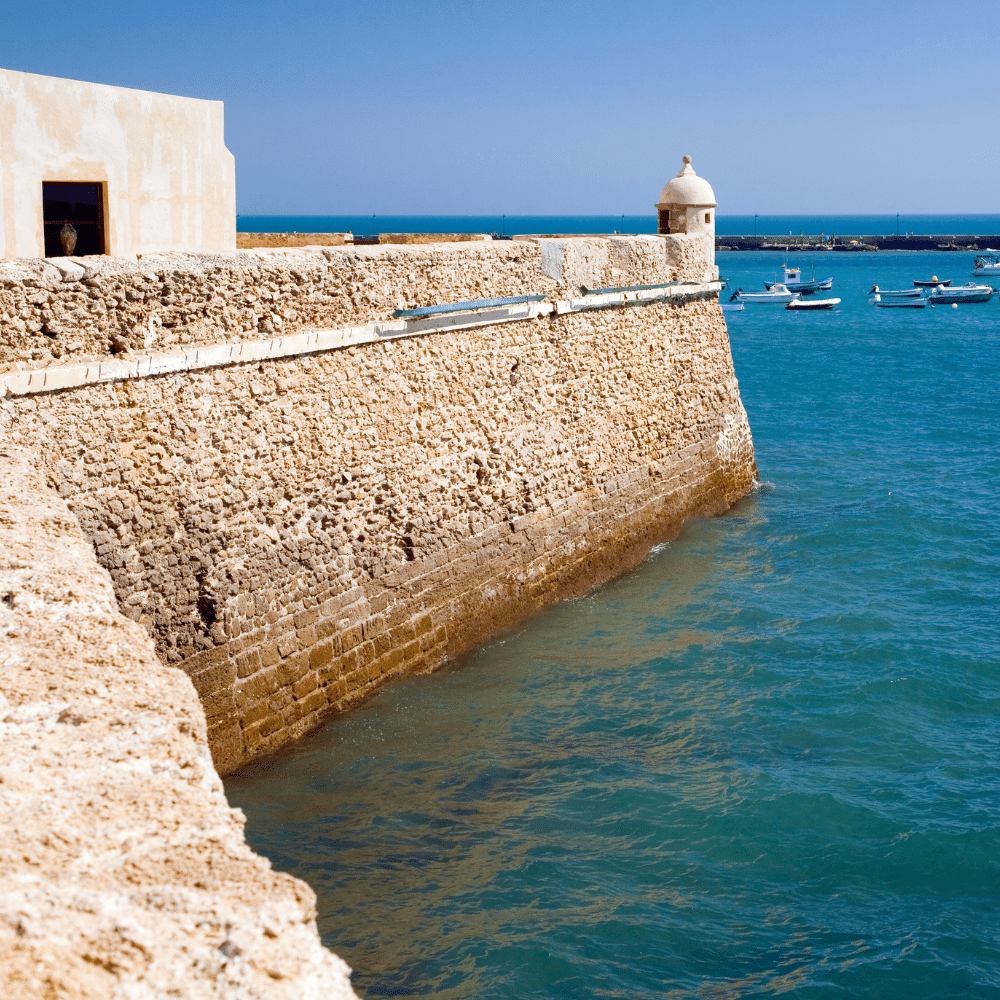 The star-shaped fortress on the sea of Cádiz.

In the footsteps of the Romans – Teatro Romano de Cádiz

You should definitely visit the Teatro Romano de Cádiz when you are on holiday in Cádiz. According to history, the theatre was built in the 1st century BC and at that time had room for about 20,000 people. This made the theatre of Cádiz one of the largest in the Roman Empire and definitely one of the most popular sights in the city. In my opinion, the importance that Cadiz had for the Roman Empire at that time is equally clear. Today you’ll find it about half excavated and partly restored. I always find a visit to such old theatres totally impressive when I imagine how such large buildings were created with the means of the time and how people enjoyed themselves here in their free time. It’s hard to imagine in times when TV, books and music are available to us around the clock. 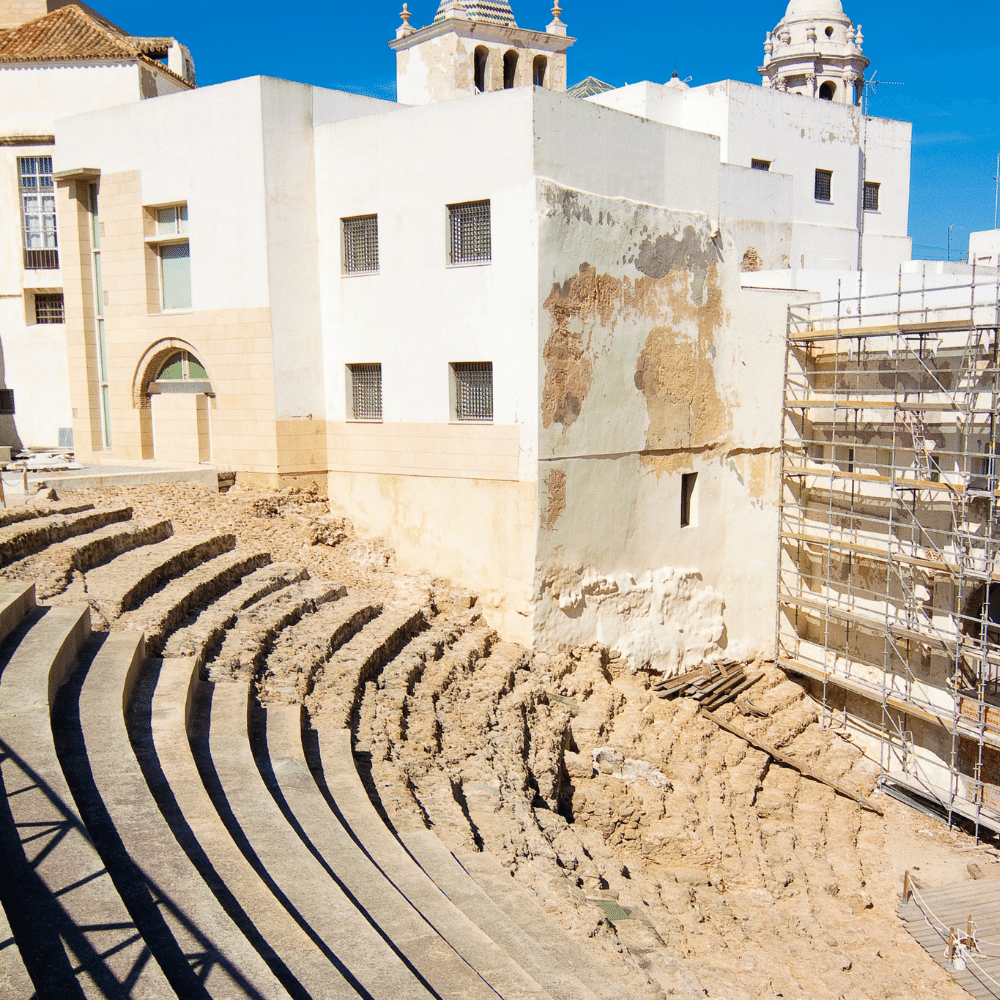 The excavation site of the Roman Theatre

Looking for a shady spot for a short break? Especially at lunchtime, I can recommend Parque Genovés. Located directly by the sea, it is the largest park in Cádiz and an absolute must-see. Over 100 different types of trees, splashing fountains and even a magical waterfall make Parque Genovés so unique. You will find rare plants, monuments and sculptures and can relax in the shade of the trees. There’s always something going on here: in summer there are even theatre performances and concerts.

An alternative is the nearby park Jardines de Alameda Apodaca. Here you will also find interesting trees or sculptures and can take a well-deserved break. 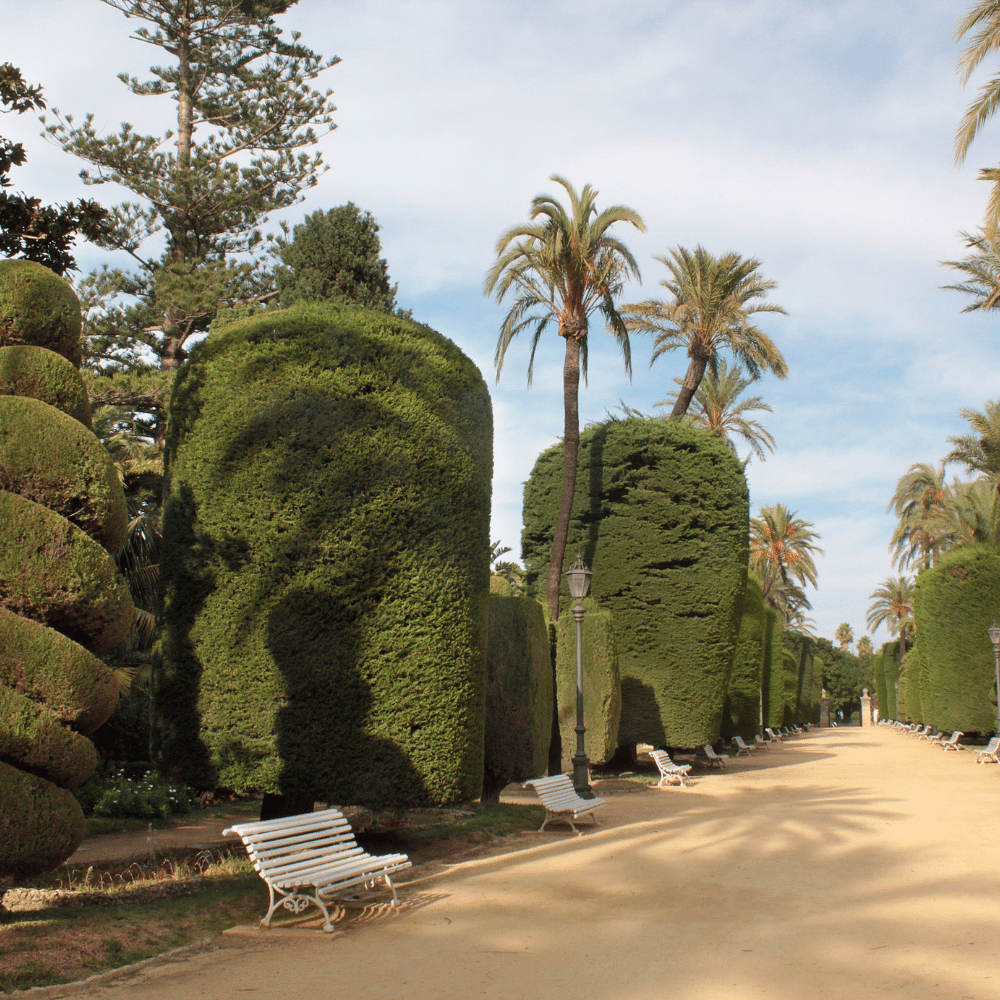 Parque Genovés is very spacious and wonderful for relaxing.

Cádiz from above – Torre Tavira watchtower

The next top sight in Cádiz is the Torre Tavira. This is an 18th century watchtower. The lookout point is 45 metres above sea level, is the highest point in the old town and was therefore once the most important watchtower in Cádiz. From up there, you can take a great picture for your holiday album, because you get a wonderful all-round view of the historic old town.

It is located in the centre of the old town and, in addition to the lookout point, also has two exhibition halls that deal with the history of Cádiz and Andalusia.
A special highlight is the camera obscura, the first to be installed in Spain. Even if the climb to the top of the tower is a bit tiring, the great view and the fascinating technology of the camera obscura make up for it. Don’t miss this sight on your holiday in Cádiz! 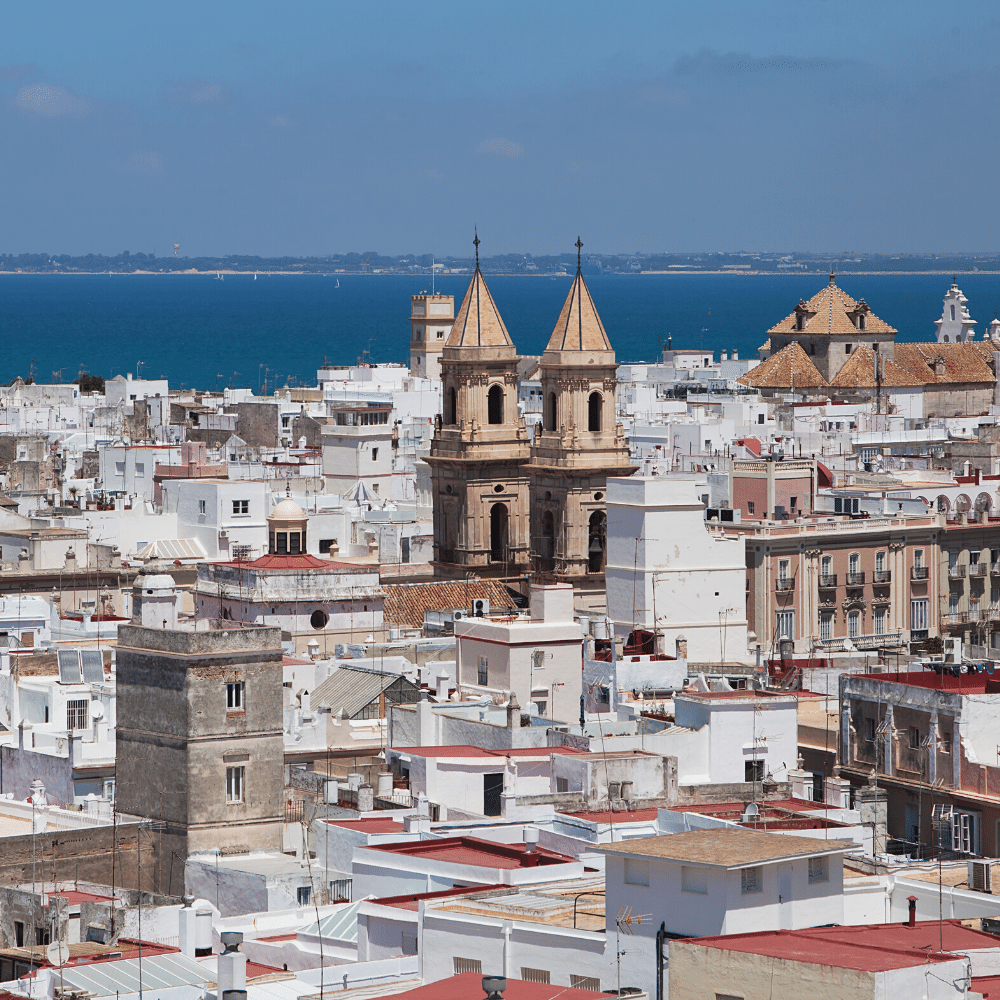 The view from Torre Tavira makes you see the city with a different eye.

Next, I recommend a visit to the Catedral de Cádiz. Dating from the 8th century, the Cathedral of the Holy Cross is, like most of the other sights of Cádiz, in the immediate vicinity of the sea – a rarity for churches. All in all, the cathedral took more than 100 years to build, which is why different architectural styles blend together. Those who know their way around will recognise elements from the Baroque, Rococo and Neoclassical periods. When the temperatures outside crack the 30-degree mark, the cathedral at least offers a little cooling from the inside. You can see the yellow dome of the imposing building from all over the old town. You can also visit one of the towers. The view from up here is great, but I like the view from the Torre Tavira even better, as I have a panoramic view from there and can also see the mighty cathedral, which is not possible from the cathedral itself 😉 .
If you’re still looking for the perfect subject for your next social media post, wait until the sun goes down. Now you’ll get the best picture of your Cadiz holiday. The sight of the cathedral bathed in deep orange is simply magical.

In the immediate vicinity of the cathedral is the Iglesia de Santa Cruz, also known as the “old cathedral”. Consecrated in 1263, it is the oldest sacred building in Cádiz and definitely one of the city’s top sights. 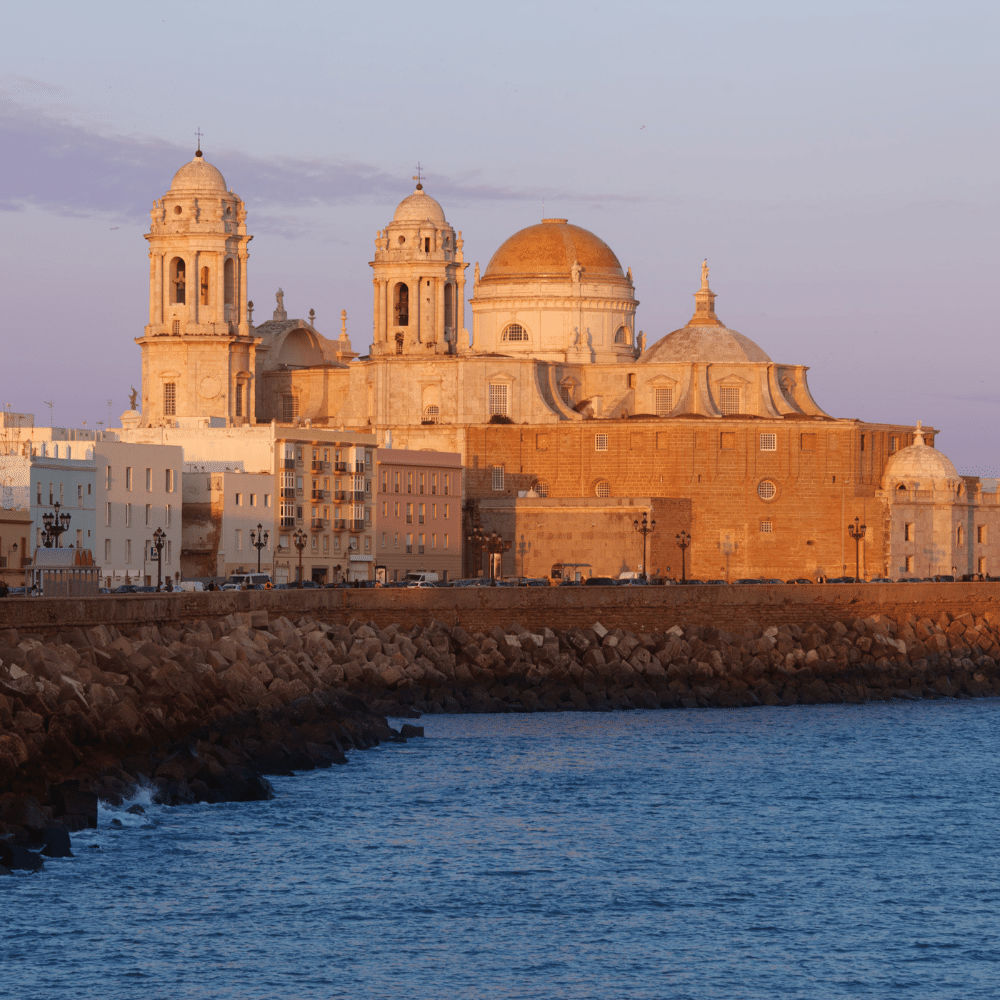 The cathedral of Cádiz at sunset. Pure romance.

The Castillo San Sebastián is a fortress complex dating from 1706. Uniquely situated on a small island, the fortress, built in 1860, can be reached from the promenade.
In the past, the fortress and castle were intended to protect against enemy attacks, but today events are often held in the inner courtyard.
I think the walk along the promenade is unique and the view of the wide, blue sea and the city is simply fantastic.

I also had the most beautiful sunset of my holiday in Cádiz here, which possibly contributes to the fact that I find this place so special.
James Bond fans take note: By the way, the fortress was also used as a location for the film “Die Another Day”. Don’t believe me? Then pack your suitcases and see for yourself 😉

The old fortress in the middle of the sea.

Holiday in Cádiz and stay at a TUI BLUE Hotel

In Cádiz, you can visit the sights wonderfully on your own and on foot. However, a guided tour is also highly recommended, as the locals will often tell you stories that you wouldn’t have heard otherwise on a simple sightseeing tour. If you stay at a TUI BLUE hotel in Cádiz, the BLUE guides will be happy to give you helpful tips for your sightseeing tour. In the BLUE app you will also find some information about possible excursion destinations and can book guided tours.

The ideal starting point for your tour of the sights of Cadiz is the TUI BLUE Playa la Barrosa, from where you can drive into the city in just under three quarters of an hour. But you can also take a day trip to Cádiz from the TUI BLUE Isla Christina Palace and see the most important sights. Feel free to tell me where you liked it best on your holiday in Cádiz!