Bozburun peninsula: Things to do in Bozburun 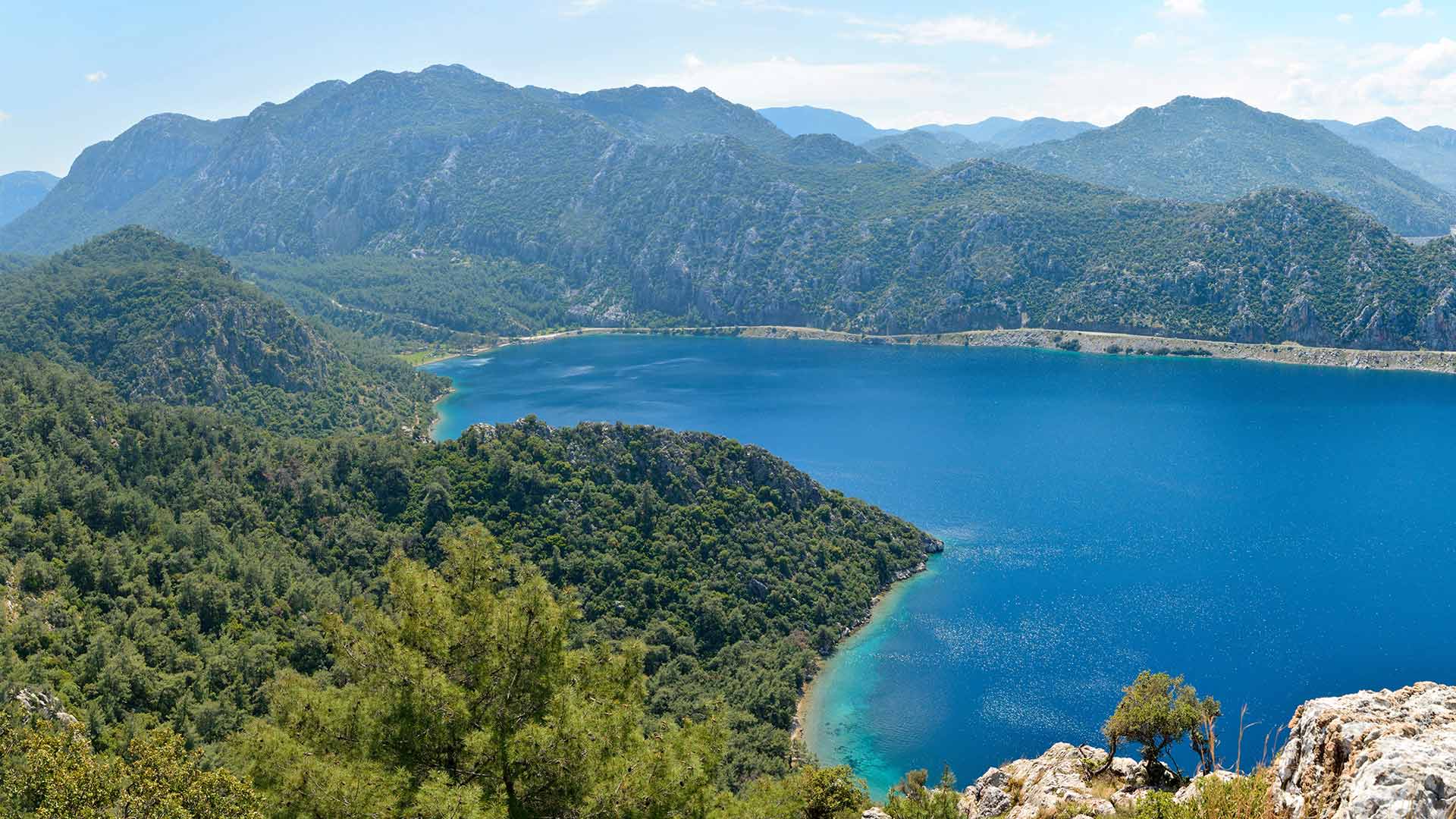 30 Sep Bozburun peninsula: Things to do in Bozburun

The Bozburun Peninsula as an excursion destination from Marmaris is almost still an insider tip, at least in the low season. The mountainous, pine tree covered peninsula is blessed with picturesque bays and has many a natural phenomenon to offer, such as a waterfall and coves. We were there in October, it was pleasantly warm and there was no sign of mass tourism. In this article, I tell you all about the highlights of the Bozburun Peninsula, including suggested routes.

Bozburun Peninsula or Datça? It depends

At our hotel TUI BLUE Grand Azur in Marmaris, the very knowledgeable staff member Anne recommended some great destinations. She should know, after all she has lived in Marmaris for many years! Among other things, she recommended tours to the two peninsulas of Marmaris. The Bozburun peninsula and the Datça peninsula extend from Marmaris like two fingers. Today we choose Bozburun because we only have half a day and this peninsula is smaller. But you should definitely also visit the Datca Peninsula if you have a full day!

Where is the Bozburun Peninsula?

The Bozburun Peninsula is located south of Marmaris in the province of Mugla on the Turkish Aegean coast. The village of Bozburun is 50 kilometres from Marmaris.

What is the best way to explore the Bozburun Peninsula?

You can do this excursion by rental car or book an organised excursion, also by boat trip or a sailing yacht. We took the rental car. Alternatively, you can hike the Carian Way on the Bozburun Peninsula.

The first decision you make, which is the route, I would make dependent on the time available. We got off late and only had half a day.

We get into our rental car at the hotel and drive the big road out of Marmaris. 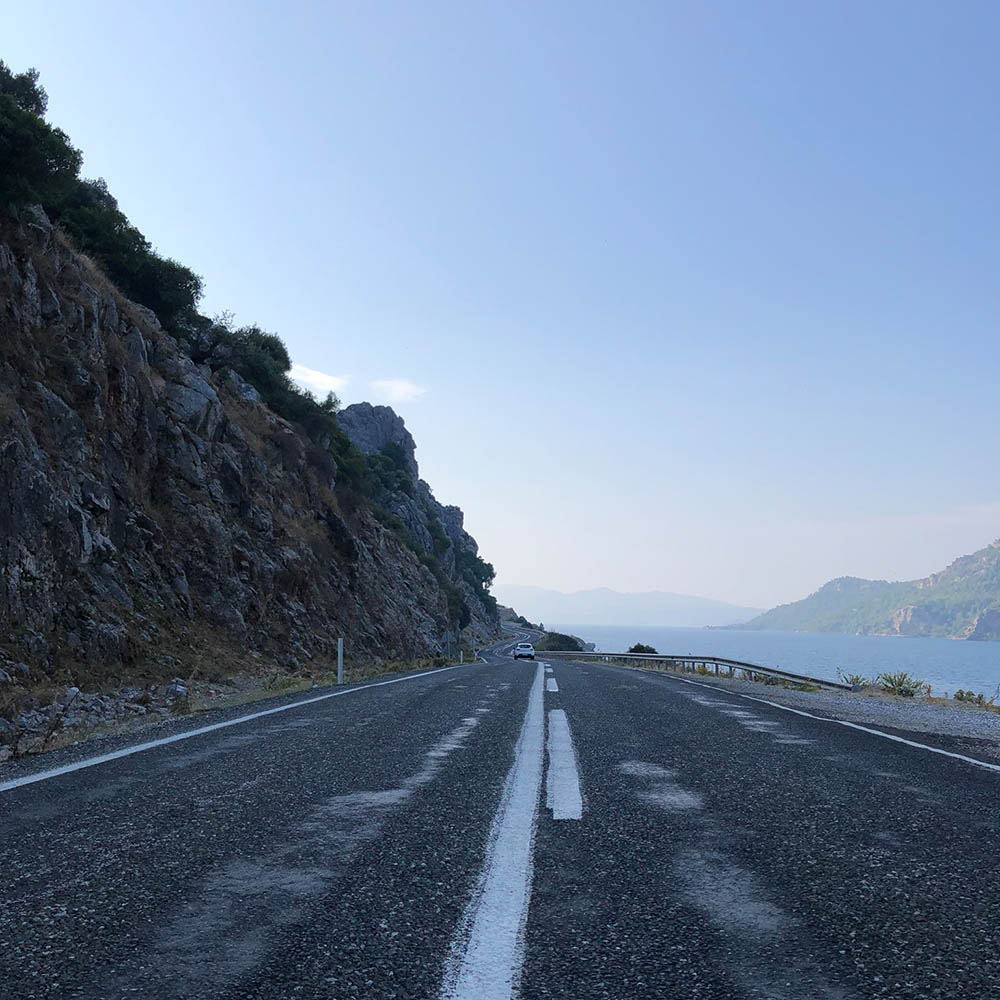 On the way from Marmaris to the Bozburun Peninsula

The road gets narrower and narrower, winding along the beach or up the wooded mountain. It is beautifully pristine here on the Bozburun Peninsula and only sparsely populated. The drive takes about half an hour. Our first stop is the famous “girl sand beach”. 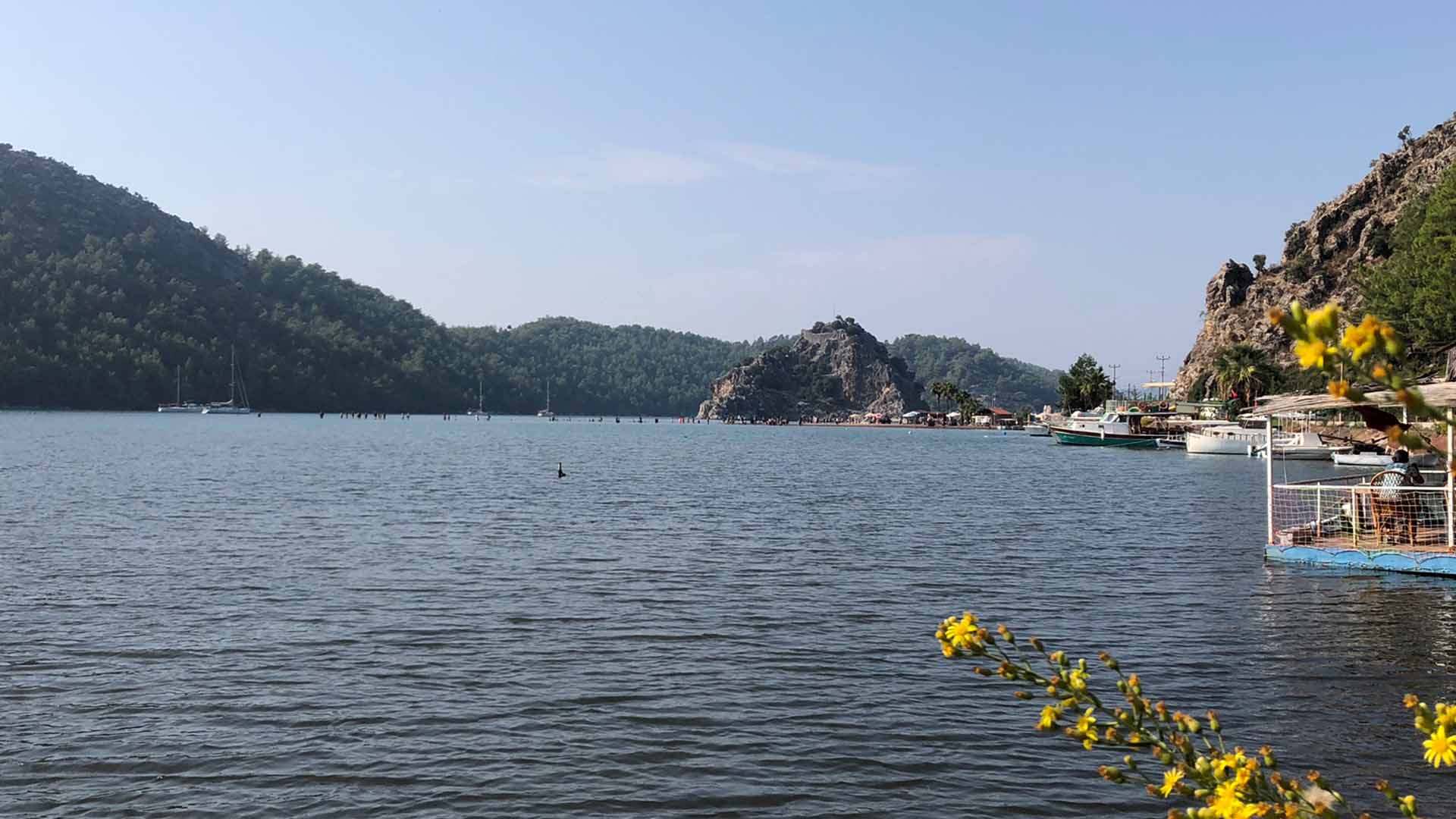 Ant trail in the bay: A group on Kizkumu beach

The “girl sand beach”, as the Kızkumu beach is called in the advertising brochures, is a phenomenon I would have rather located in Thailand. Even from a distance, visitors can be seen making their way from the beach into the sea. Following an invisible line, people make a pilgrimage to the middle of the bay and stand in the middle of the sea – and the water only reaches up to their knees. Of course, we want to try that out too. Sandals off, off we go into the water. 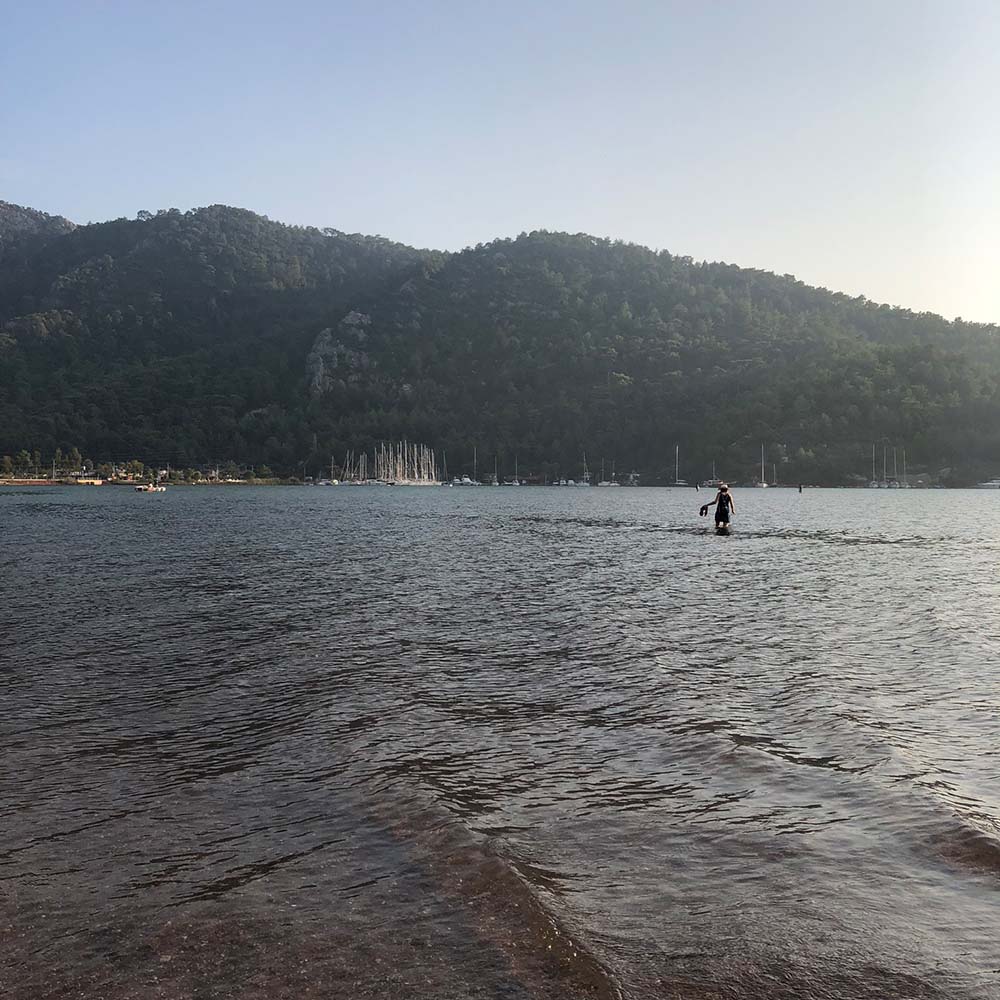 Miri fights her way through the sea at Kizkumu Beach

On the way, we have to be careful not to get off the path, i.e. the narrow sandbank, and end up bag and baggage in deeper water. After some wading through knee-deep water, we arrive in the middle of the bay and enjoy this curious experience. On an island there are still decorative remains of an old fortress. You can’t get there on foot, though. At least not dry. 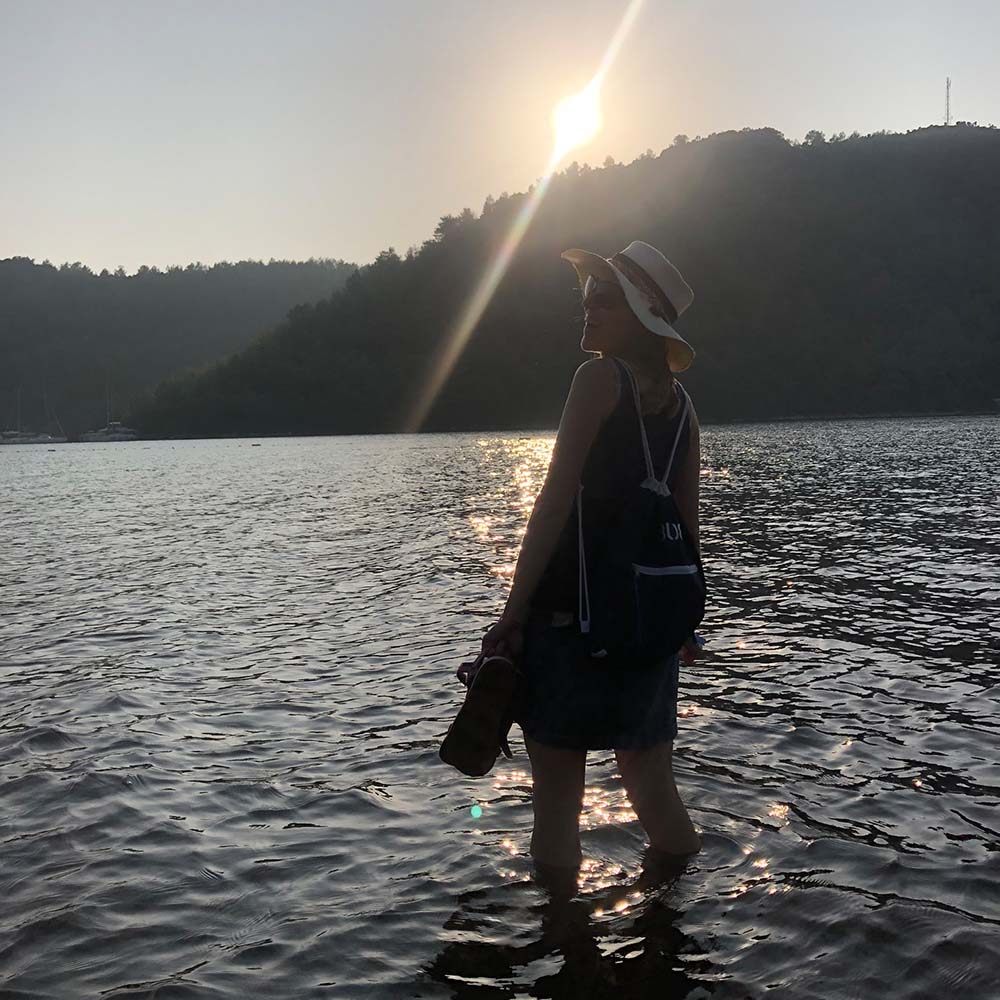 Why is Kızkumu Beach actually called Girls’ Sand Beach? According to legend, a girl wading through the sea tried to reach her beloved by carrying sand in her skirt and thus filling up her way. When the sand ran out, the poor girl drowned in the middle of the sea. On the beach there is a white statue of a woman looking out over the bay as a reminder of her.

We dry our feet and continue to the Turgut waterfall. And that’s when we immediately remembered what we had forgotten: a towel.

The Bozburun Peninsula is full of surprises. On the way we see open safari vehicles taking holidaymakers to the highlights of the Bozburun Peninsula. It looks like a steamy affair. The tours have started earlier than us and so we are lucky that the bawling groups meet us on the way to the Turgut Waterfall. So we have the idyllic falls almost to ourselves.

Caution: The road to the Turgut Waterfall is bumpy. Drive slowly and carefully if you have a small car. Every now and then there is a branch or something else on the way.

An explanatory board at the car park tells us about the local flora and fauna and the mystical atmosphere in which we will feel the presence of Greek gods. It is not quite so esoteric after all. The forest provides plenty of shade. On a scorching hot day, it is certainly totally pleasant here. It smells of forest and a brook splashes between the rocks. The path to the waterfalls is really well developed. However, it is still not possible for people with walking difficulties or prams. Again and again, the cool water pours over cascades. 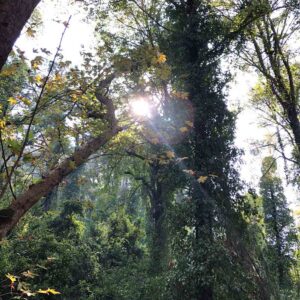 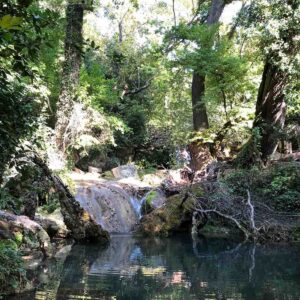 In some places it looks like you could use the rock as a water slide. But afterwards your bottom would hurt a lot – and not only your bottom. So we leave it. After about 5 minutes we reach our destination, the Turgut waterfall. It pours from a height of several metres into a pool and here we can imagine very well how a Greek goddess refreshed herself under the waterfall. 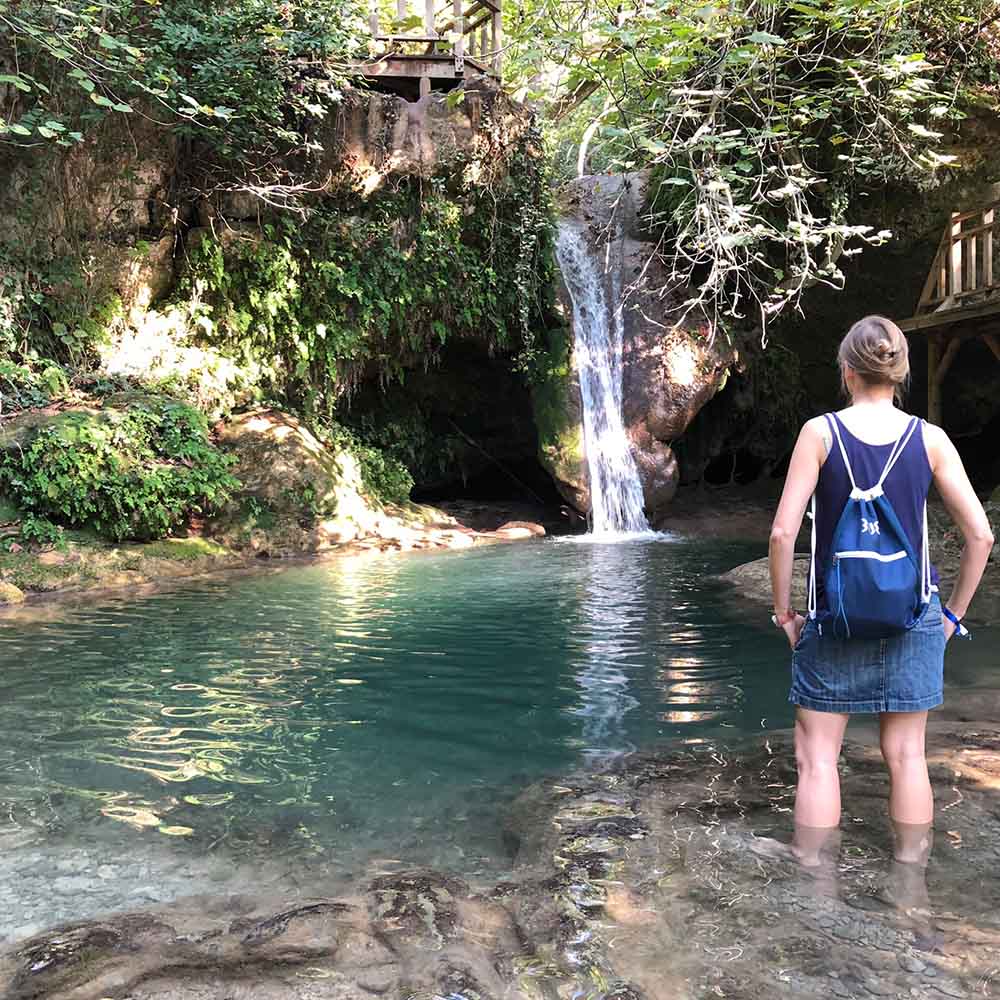 Can you slide down the Turgut waterfall? Better not!

I bathe my feet, it’s too cool for a full immersion. The rock is slippery, so watch out. This place is very instagrammable! And again, a towel is missing. We dry our feet in a makeshift way and go back to the rental car. By the way: The sneaky TUI-BLUE gym bag in the photos can be ordered in the BLUE Shop. And towels too 😀

The drive continues over the ridge of the wild Bozburun Peninsula past the village of Selimiye. The stunning views of the bay of Selimiye are as fantastic as all the other bays here. But our destination is Bozburun and so we drive a few kilometres further through the wild landscape. 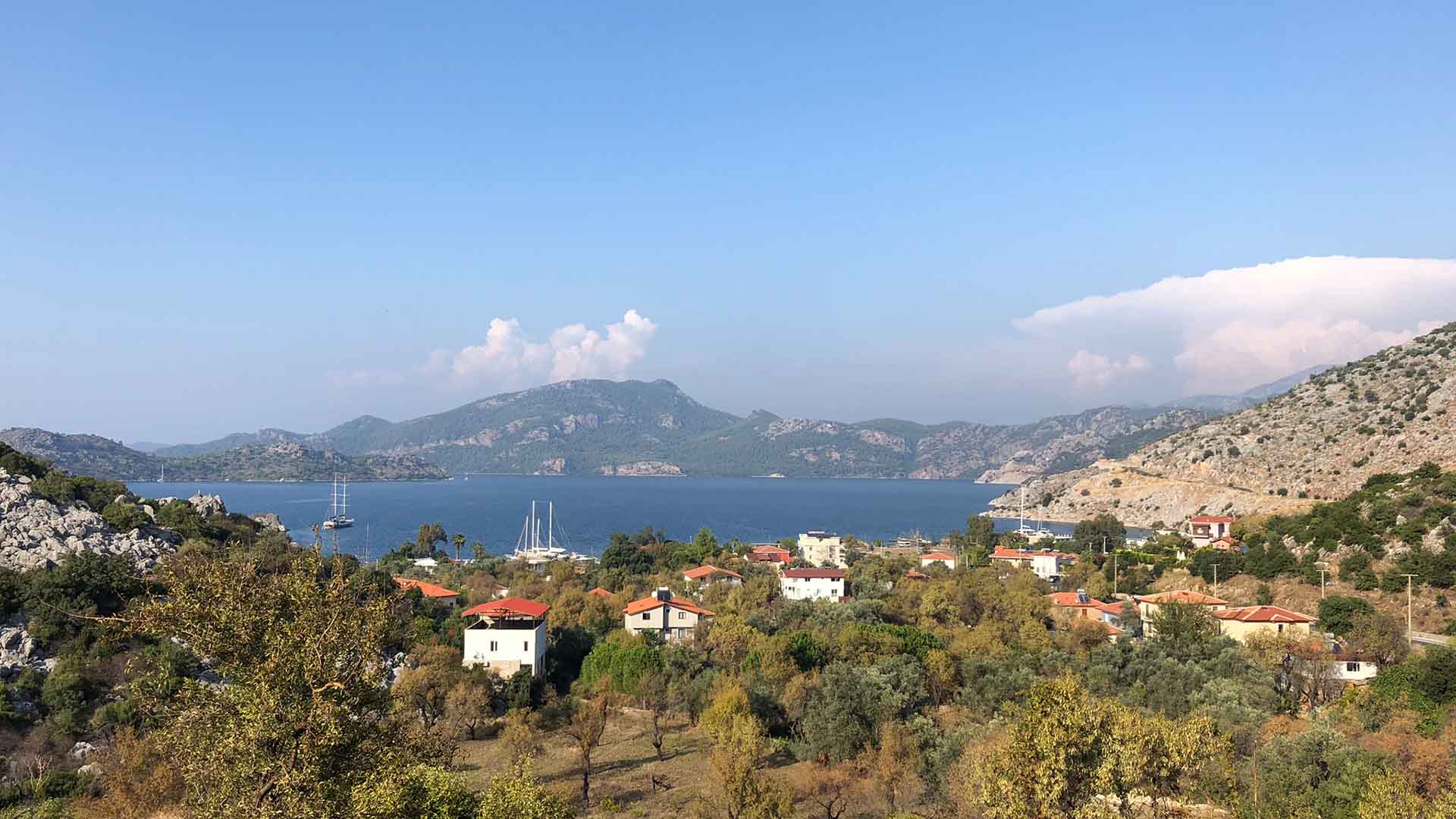 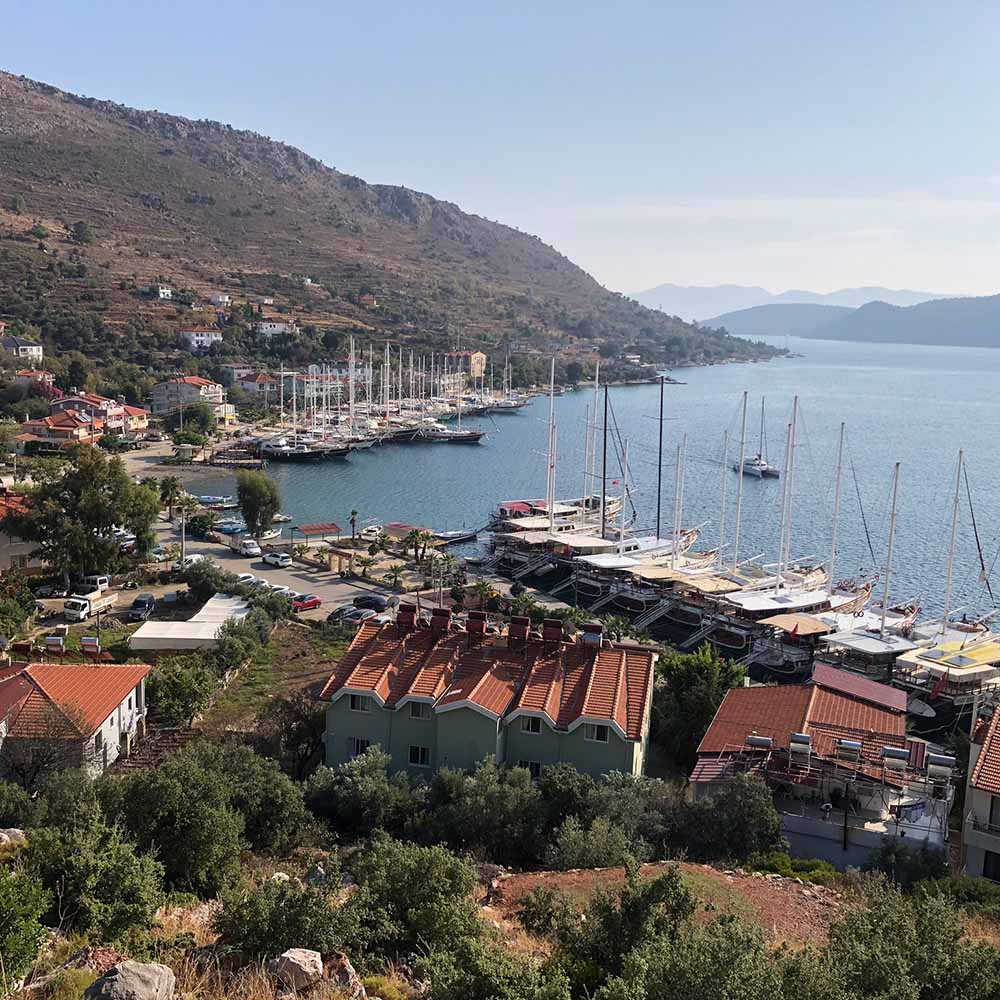 Bozburun marks the last stop on our road trip across the Bozburun Peninsula. The village, after which the peninsula was named, is very sheltered in a beautiful bay. The place doesn’t really have any sights. The location is the highlight. 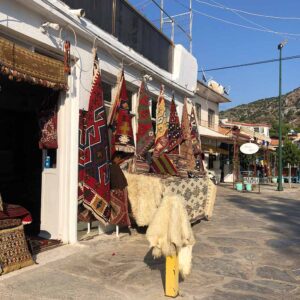 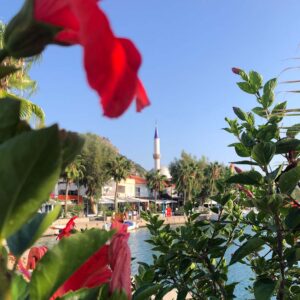 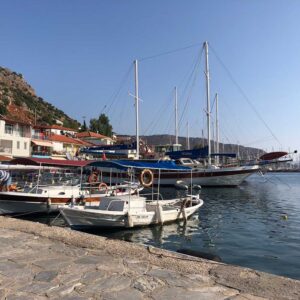 In addition to a mosque that extends to Bozburun Bay, there are many restaurants and cafes serving Turkish village breakfast and other Turkish specialities and many small guesthouses along the coast. 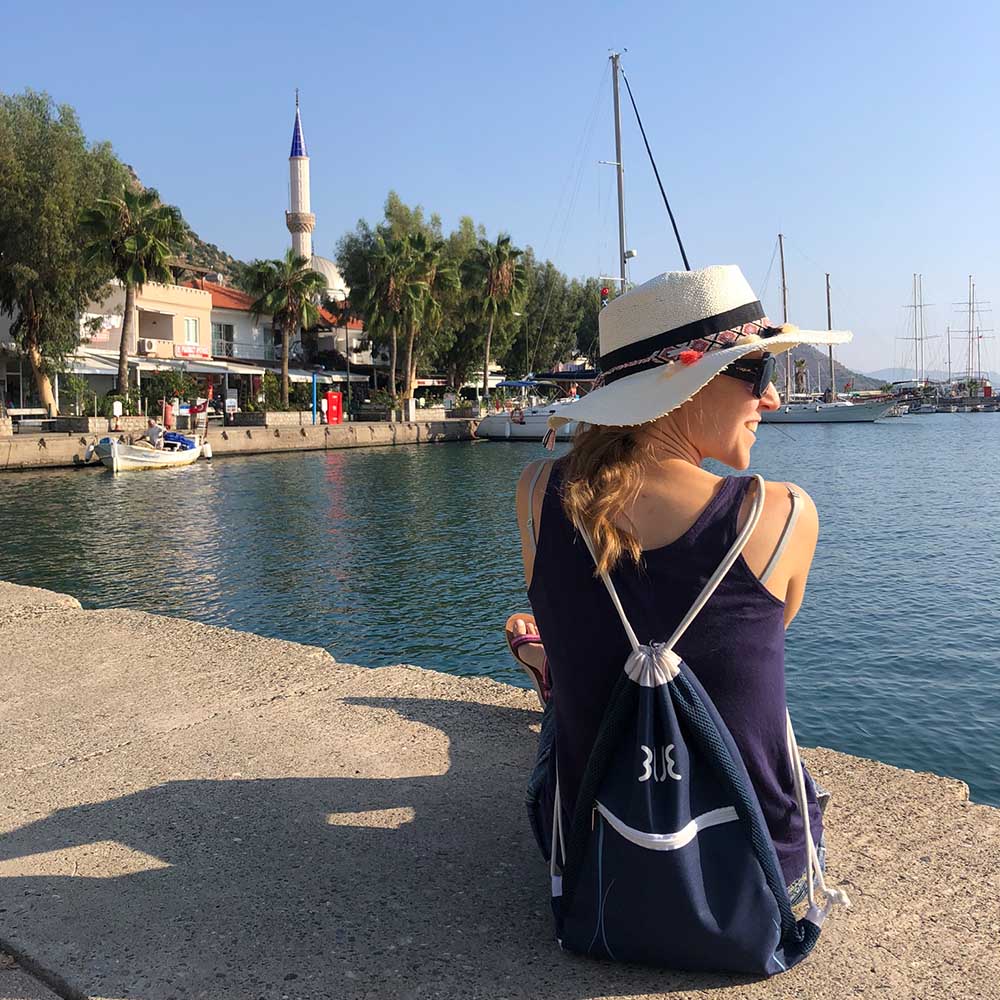 Miri is dreaming of her own yacht in Bozburun

We treat ourselves to an ice cream and admire the stately yachts anchored in the marina of Bozburun. Unfortunately, we are not yet as rich and famous as we would like to be. So we drive back to our hotel in Marmaris, where we are treated as if we were rich and famous. And the food there is also princely! 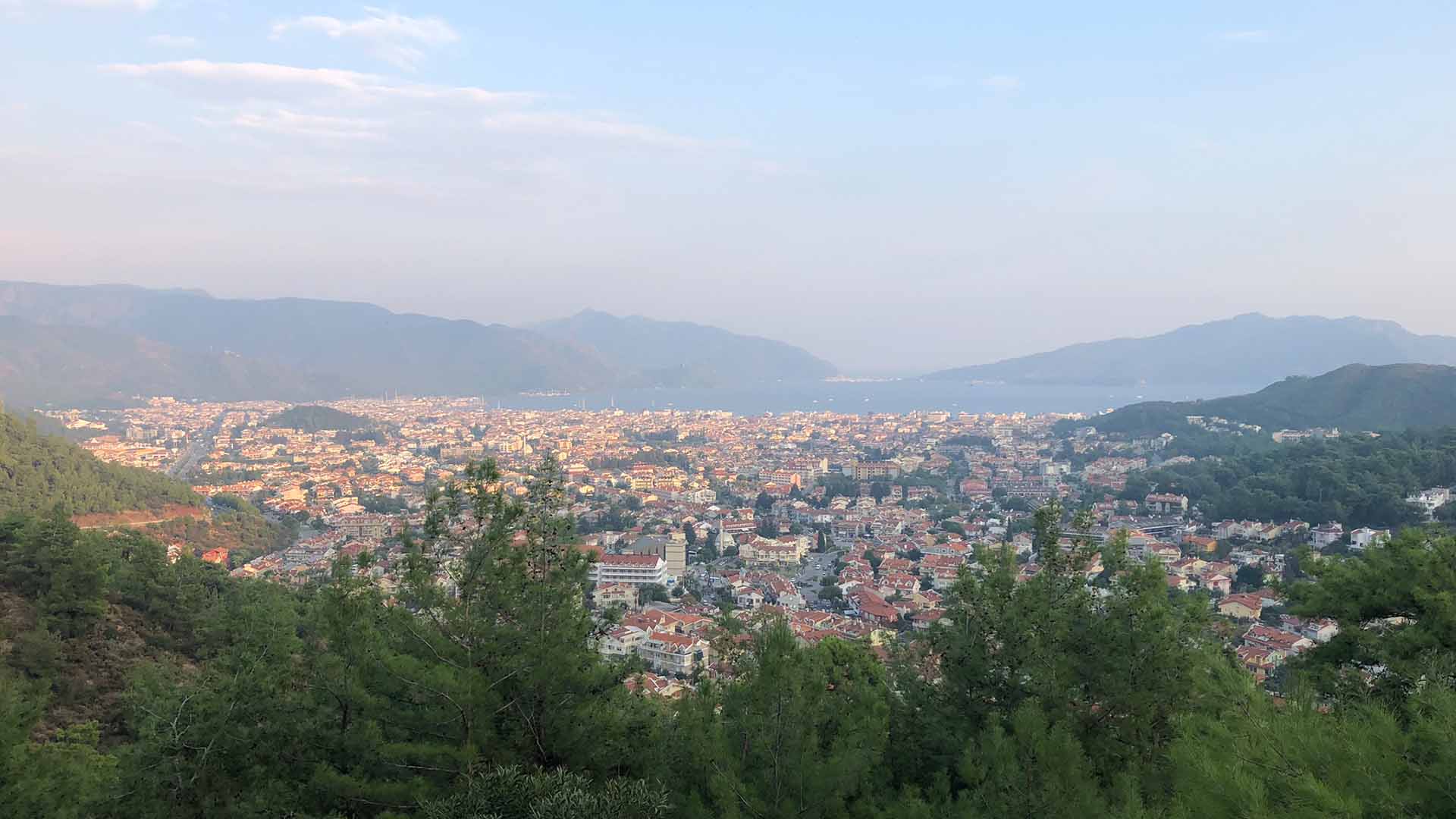 Evening atmosphere in Marmaris. The buffet at the hotel is waiting.

Bozburun Peninsula to the southern tip

However, the trip on the Bozburun Peninsula could go further south at this point if you have enough time and leisure to discover more highlights. In the next village Söğüt there is a small harbour, many small guesthouses and fish restaurants. The next village, Bayir village, boasts a 2,000- year-old Plane tree. After that, the road winds back up the mountain to a tiny harbour in the cosy bay of Serce Limani. On Google Maps, it looks like the road ends here. With an off-road vehicle, you would certainly almost reach the ruins of Bozukkale, a place of interest in the very south of the Bozburun peninsula. From there you can probably see the Greek island of Rhodes and enjoy spectacular views. Many of the beautiful bays in the area are only accessible by boat. Which is apparently very popular, otherwise there would be no restaurants in those bays.

Oh yes, next time we will come by with our sailing yacht. When we are finally rich and famous 😉