Tandem paragliding from almost 2,000 metres above sea level. When my colleague, Heike, sent me the itinerary for my stay at the TUI BLUE Schladming, it quickly sent me reeling. Pressure dropped in the cabin, oxygen masks fell, help! I immediately called my travelling companion, Miri, for an emergency meeting to discuss whether we really wanted THAT. In addition to the paragliding tandem flight a paragliding intro class awaited us, which you’ve probably already read about. We decided to divide the programme items, because we knew that shared suffering is double…uh…I mean, half the pain. Since Miri couldn’t stand to be more than a metre off the ground (but she was, anyway, eek), and I didn’t like the idea of navigating a complex aircraft like a paraglider, the decision was easy. Miri would start on Amateur Hill and I would dare the tandem flight from the 1,906-metre-high Planai. 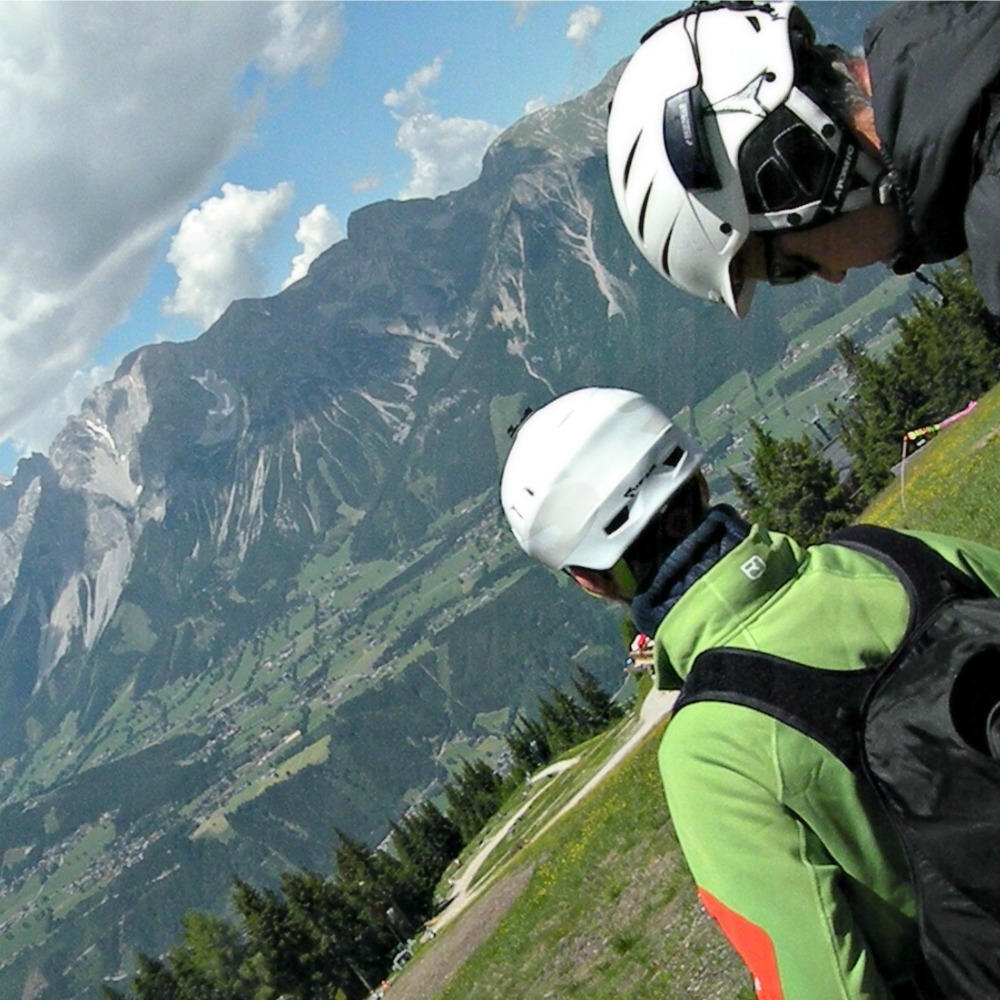 The view was also breathtaking from the ground

Early in the morning, when we had the best weather, we made our way to the Aufwind Flight School in Ramsau am Dachstein, where Miri made her first successful flight attempts during the paragliding intro class.  While I carefully documented everything with my camera and encouraged Miri to keep trying to fly, I also glanced nervously at my watch. The moment of truth and tandem flight was slowly approaching. From Ramsau, we drove back to the valley station of the Planai, directly across from the TUI BLUE Schladming. I was accompanied by Marion from the hotel reception team, who had introduced me to snowshoeing last winter. We weren’t as relaxed just before the tandem flight, that’s for sure. When we arrived at the valley station, our pilots, Christian and Michael, were already waiting for us. After getting to know each other a little bit, Marion and I had to choose a tandem partner. I quickly decided on the older Christian. A bit more experience with paragliding couldn’t hurt, right? Next, it was time to drive up the Planai, the 1,906-metre-high mountain that towers above Schladming. The ridge is a popular destination all around Europe for skiing and snowboarding in winter; in summer, sports enthusiasts who love mountain biking, hiking, climbing, paragliding, or just tandem paragliding come here to play. Laden with our equipment, the four of us climbed into the gondola and went uphill. The mood in the small cabin was at least tense for me and Marion, since we had just put our lives into the hands of strangers. “Don’t worry, we’ll all come back down again in one piece,” Christian reassured us. For him and Michael, paragliding and tandem paragliding were routine – they take off from the Planai half a dozen times a day. 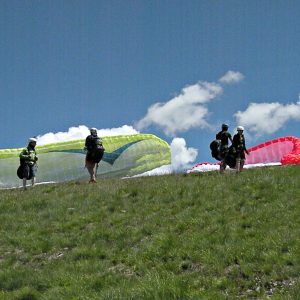 Christian and Michael prepare the chutes 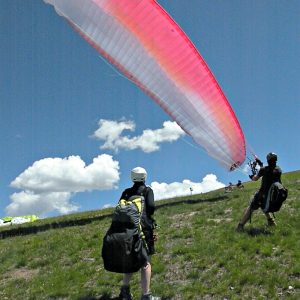 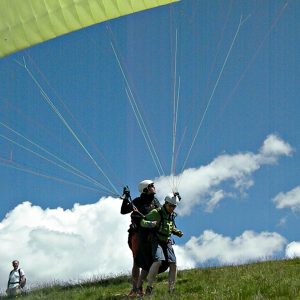 Once at the top, we did a small ascent with the bulky equipment before beginning the final preparations. Our tandem partners laid out their chutes, put on their rucksacks, and attached the harnesses and helmets to themselves and us. Christian briefly explained the procedure. When he raised his chute and said “run”, I was supposed to push against the drag of the chute and run. When we took off, I was to sit down comfortably and hold on tight. Sounds easy, right? The view up there was clear and breathtaking. We were looking right at the impressive Dachstein massif. The sun was shining, the visibility was good – the conditions seemed ideal to an amateur like myself, but they weren’t. We had light winds, which delayed our start. “Parawaiting”, Christian called it. Flying has always been a discipline for patient people, and paragliders are usually correct about the weather. The wind died down, and to my left I could see Marian and Michael already getting started. Seconds later, they were up in the air and quickly became a dot on the horizon. Christian asked me if I was ready. Well, as ready as I would ever be… I said yes despite my doubts and – at his command – ran with all my strength. The chute’s pull was enormous and it pinned me in place at first, but I was finally able to move and a few moments later my legs were in the air. 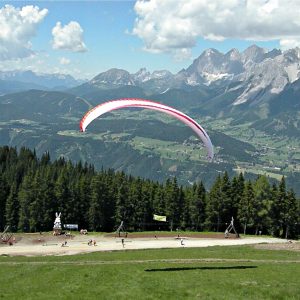 Michael and Marion take off 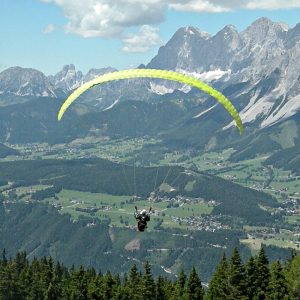 And Christian and I also get started 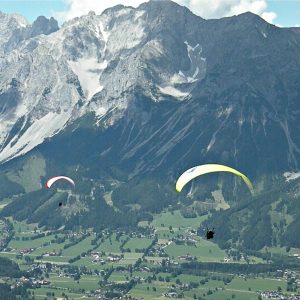 Tandem puts you both in the air

As soon as we were off, I could see why the paragliding pros called it flying and not jumping. We soared majestically up over the mountain like a giant bird of prey. From up here, the view of the Planai and the Dachstein massif was both fascinating and surreal. People looked like ants; houses and cars looked like toys. It was like the view from an airplane during take-off and landing, just without windows, walls, or doors – an infinite sense of freedom. Christian turned the chute into the wind. We caught some warm air, gained some altitude, and the slope fell away below us. Such currents of air are called thermals, and they allow a paraglider to stay aloft for hours. I was fascinated watching everything from a distance and enjoyed the pervading silence hundreds of metres above the ground. 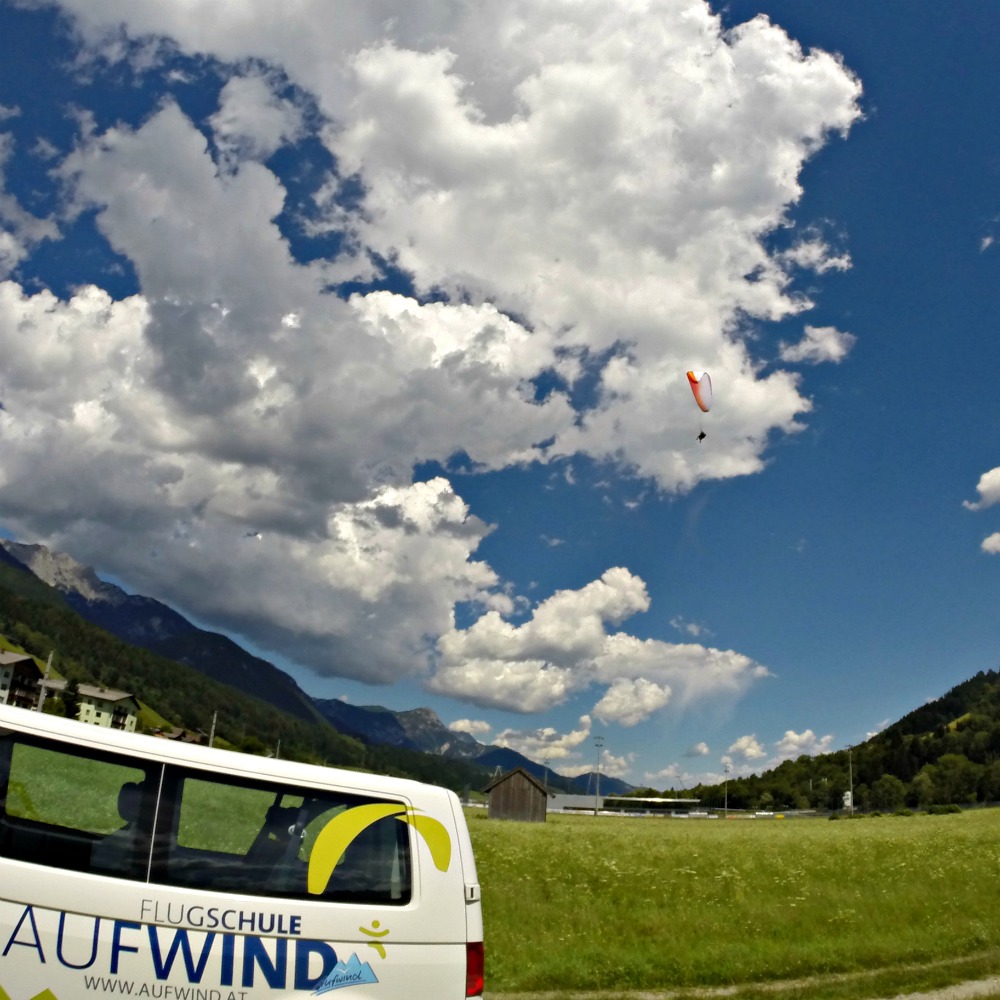 Marion and Michael coming in for landing

A Roller Coaster Is Child’s Play

Schladming was getting closer and we spotted the other team – Marion and Michael – far below us. Christian asked me if we should go down to look at the other two. I wondered how that would work, but nodded in agreement. The pilot did a little back-and-forth swing with the chute, which turned sharply to the left and we started to spiral downward. The massive g-forces pressed me into my seat and my stomach jumped up into my throat. It was like a combination of corkscrews on a roller coaster and a hole in an airplane. I felt like my adrenaline-pumping body was about to burst, and I screamed out of both fear and excitement. What fun!  “How was that? Want to do it again?” Christian asked. “Yeah, one more time!” I responded. And off we went… Marion and Michael, who were a good way below us, seemed to be floating hundreds of metres above us just a few seconds later. 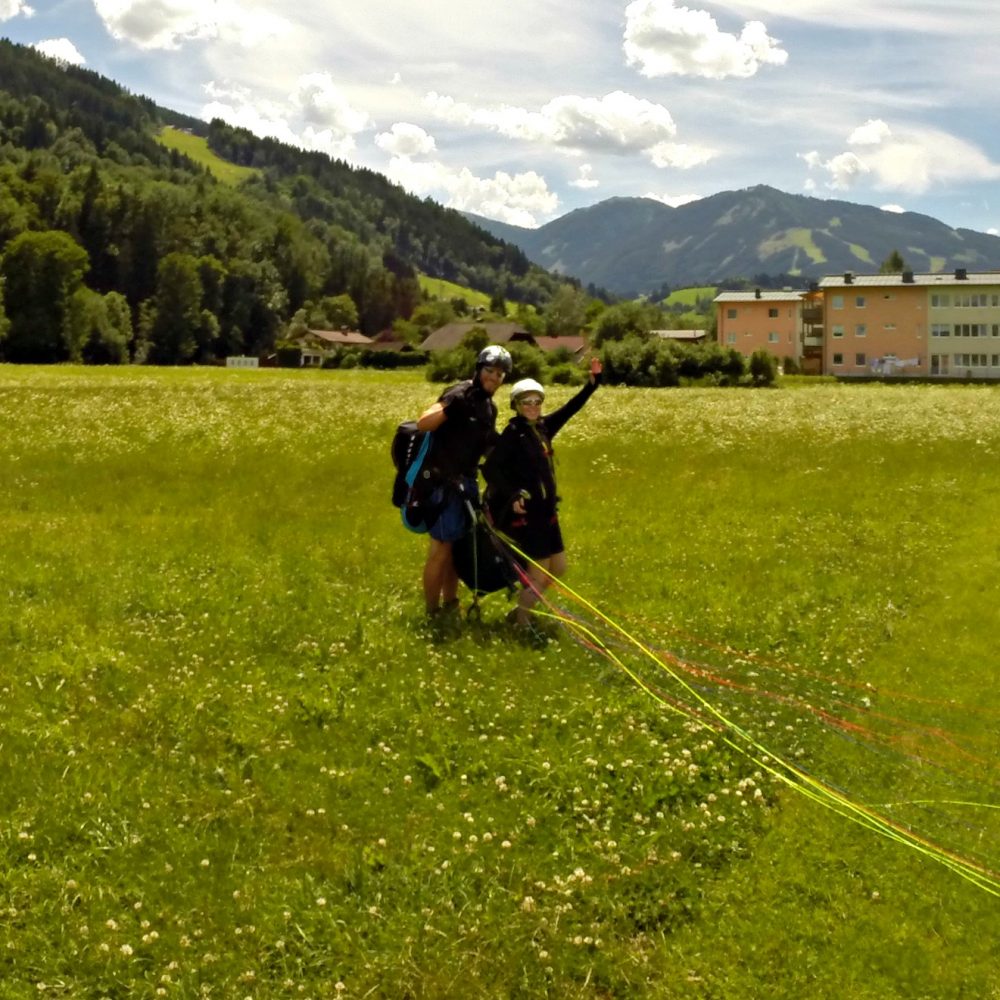 The last part of our flight then took us over the houses and streets of Schladming at a leisurely pace. Slowly, my tandem partner worked the chute down toward the landing zone. Just before we touched down in the field, we were gusted up one more time by an air stream and then settled down on the ground. The team at the Aufwind Flight School was already waiting to take us back to the TUI BLUE Schladming. Michael and Marion were still circling above us. I was ecstatic about the tandem paragliding and was profusely thanking everyone for the incredible experience. My conclusion? Even if you’re afraid of heights or – like me – wild roller coaster rides, you should not miss out on this fun and, above all, the spectacular views. But be careful – paragliding is addictive!

Tandem paragliding and many more flying activities are offered at the Aufwind Flight School in Ramsau am Dachstein, Austria. Discounts are possible with the Schladming-Dachstein Summer Card. The base for our adventures was the TUI BLUE Schladming hotel, where the staff are really familiar with the adventure sports in the area. The Schladming-Dachstein Summer Card is available there free of charge with a night’s stay. With the card, you’ll get many discounts or free admission to attractions in the region. Photos: cover photo © pavel1964 – Fotolia.com