Pottery class in Tuscany: Come on down!

24 Nov Pottery class in Tuscany: Come on down!

A pottery class? Really?! Not that I’m not interested in arts and crafts, but when I think of a pottery class, I first picture the passionate craftsmanship of Demi Moore and Patrick Swayze from the 90s tearjerker “Ghost.” Aww, how romantic … With this attitude (“This is not for real men!”) and a modest amount of anticipation, I participated in a pottery class in Tuscany. First of all, I was very wrong!

After paragliding, mountain carts, and rafting, now a pottery class, oookay. On a sunny afternoon, Miri and I made our way together from the hotel to the medieval “borgo” (or “borough”) of the tranquil village. Usually, the pottery class takes place in the fresh air in the charming setting of the medieval Medici garden. However, since that day’s heat bordered on the oppressive, we met with master potter Catia in her adjoining studio. Catia warmly welcomed me and Miri and showed us some of her works on the ground floor. Catia is in her mid-fifties and has a degree from the “Istituto d’Arte di Firenze”, an art school in Florence. Shortly after completing her studies in 1985, she began to experiment with the so-called “Colombino” technique, which she still primarily uses for her art. The artist first rolled the clay, which she then transformed into small snails, flowers, loops, etc. with just a few practised manipulations. Afterward, the decorative embellishments were applied, for example, on vases and other vessels. 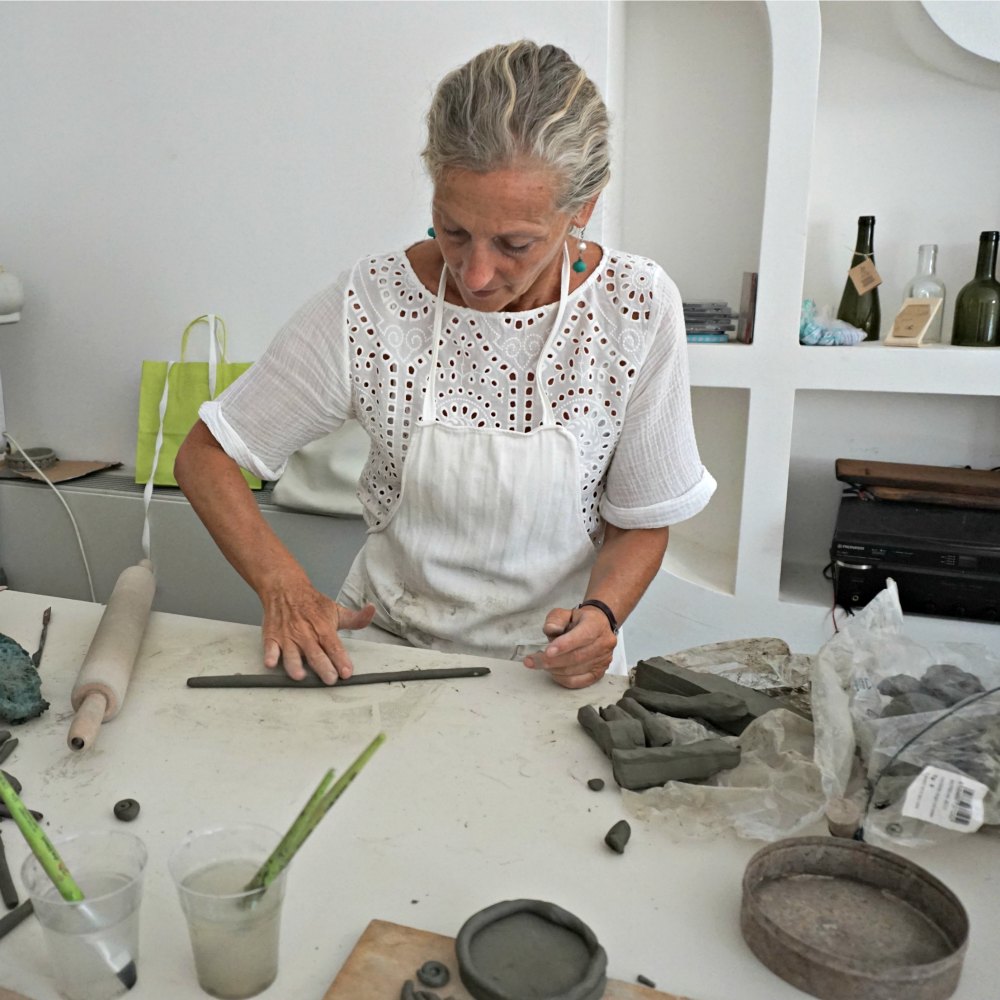 Master Catia in her element

Serve up some sausage!

After this brief explanation, Catia invited us to the upper floor of her studio and the pottery class began. We started with a small bowl, which was reminiscent of the shape of an ashtray. Catia first brought out a large, cube-shaped block of clay, from which she cut off several slices. To do this, she used a wire stretched between two wooden rods. Then it was our turn! The master handed me and Miri the clay, and we used a form to cut out a circle. The circle served as the bottom of the dish. We then formed a thin sausage out of the clay, which was attached to the edge of the circular cutout. In the next step, Catia demonstrated how to model the clay into a small spiraled, snail-shell shape. I took a piece of clay and rolled it into a sausage on the table with the palm of my hand. I had to be careful, because this couldn’t be thinner than 0.5 centimetres, otherwise it would become brittle. Not so easy! 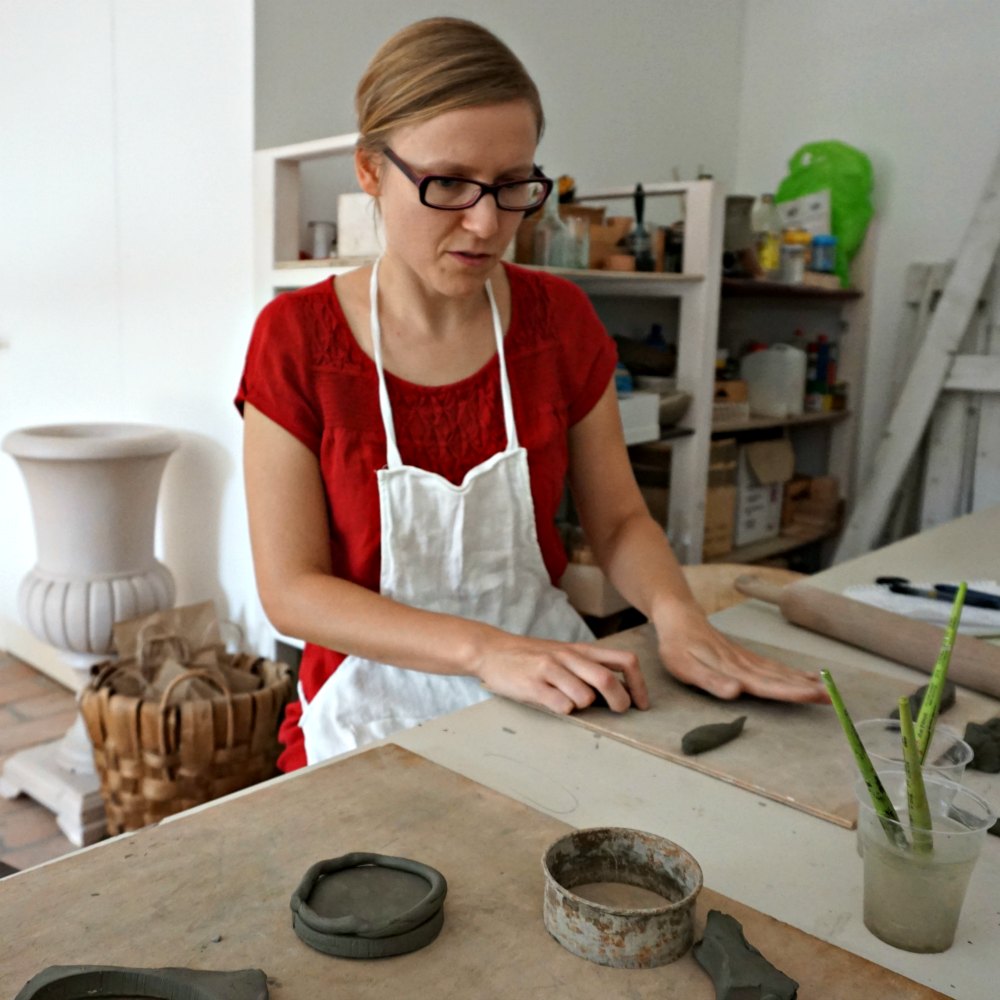 From snails and loops

After a few attempts, I managed to form a snail that didn’t immediately collapse again. Next, I used water to attach the small decoration to the circular base of the dish. Wow, that was fun! I worked meticulously on other snails and M-shaped loops, which I alternated to form a decorative row along the base of the dish. This process was repeated until the circle was closed. Afterwards, I formed another thin roll, which I attached as the upper edge of the bowl. Finally, I used a small plastic modeling tool to smooth and connect the individual pieces on the inside of the dish. My first artwork from the pottery class was ready! Well, not quite, because now the clay had to dry for a few days under the Tuscan sun. Then the vessel could be fired for about six hours at up to 950° Celsius, which is how it would get its typical red colour. 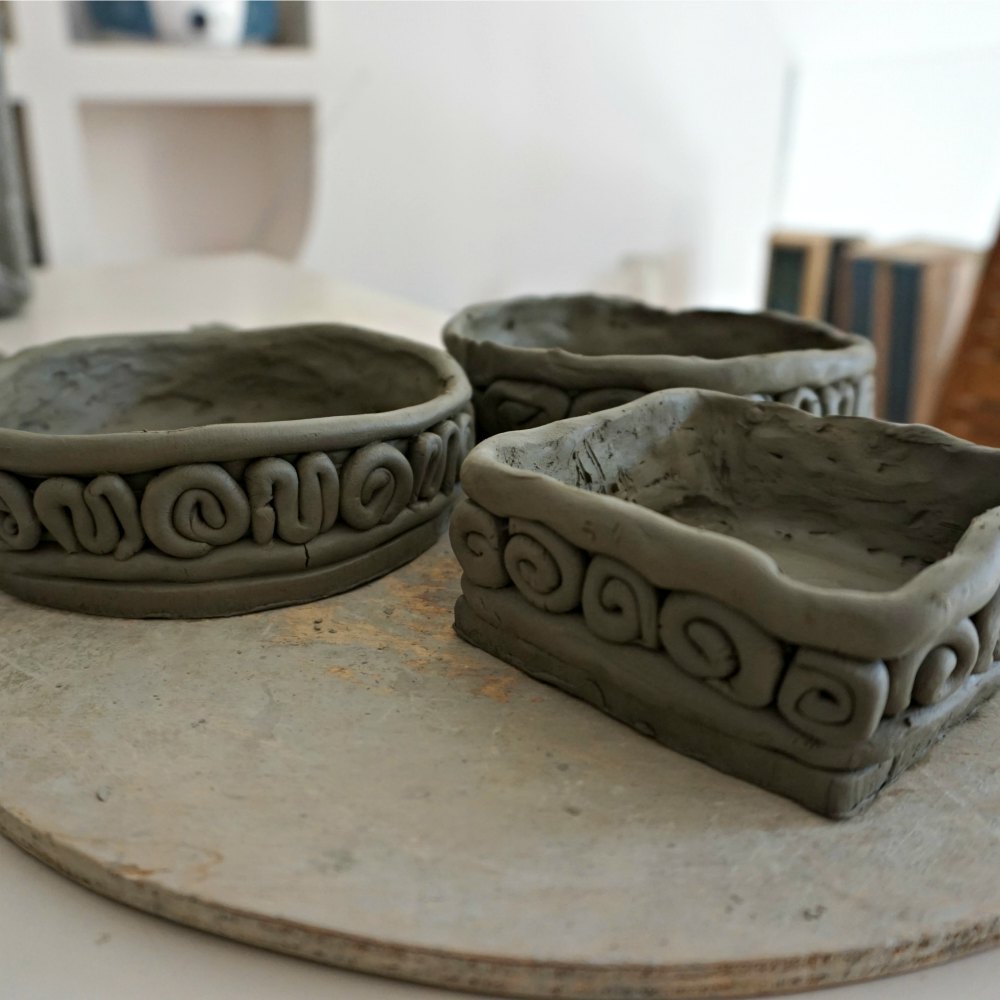 The results of our first attempts! Not too bad!

Our next work in the pottery class was also made with clay from – you guessed it – Tuscany. Catia handed me and Miri two small, wide-rimmed bowls in a pre-made form. Our job was to make the border with more loops, snails, and other patterns. To my surprise, I had entered a state near deep relaxation – the pottery class was almost meditative! Serenely, I modeled other shapes and attached them to the small bowl with water as before. Unfortunately, my plan did not quite work out and in the end a relatively big gap was created, which was nevertheless too small for two more loops. Without further ado, the potter formed a flower that fit perfectly in the gap and thus my second artwork of the day was finished. Catia praised me and Miri appreciatively before we began the last task in the pottery class. 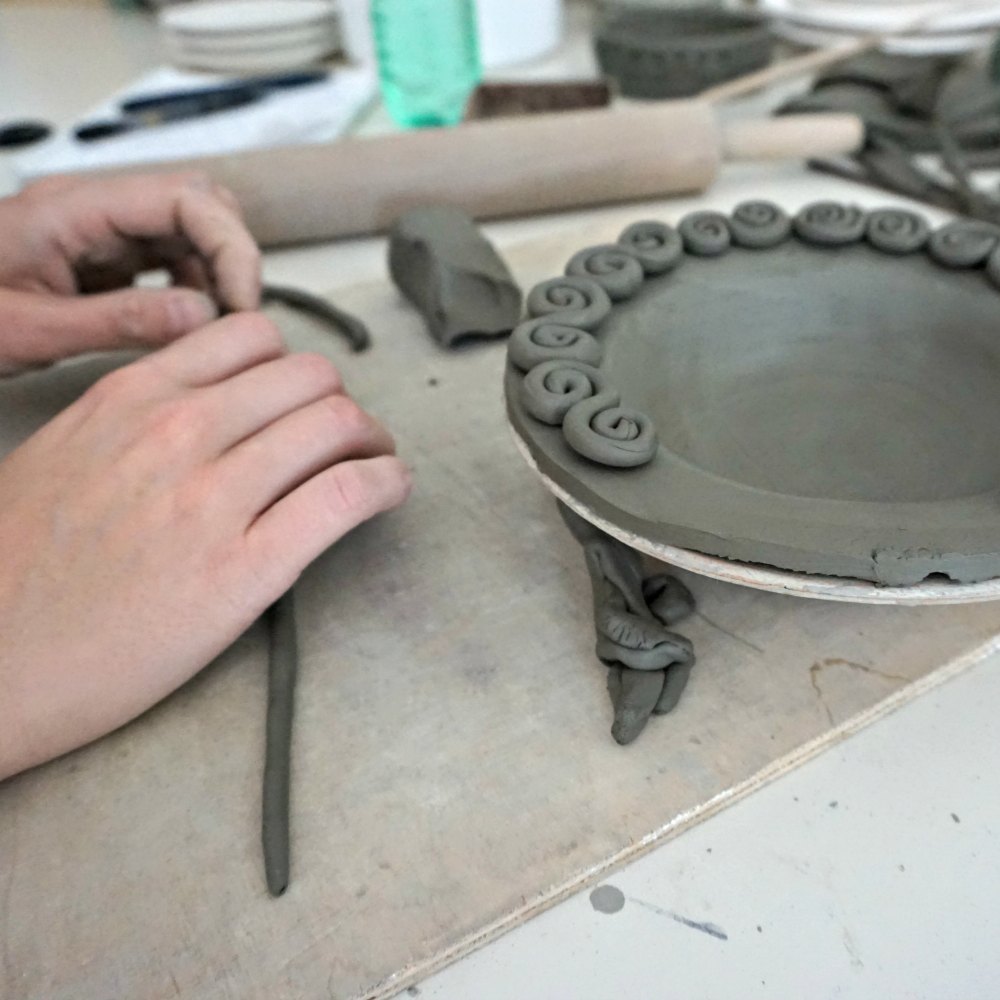 Rolling loops and arranging them on the bowl

Painting in the pottery class

The trainer then offered us our choice of plates in varying sizes, all already ready for sale. What were we supposed to do with them? Paint them! We had the choice of different coloured pigments and various thin and thick brushes. When we mixed the powdered pigments with water, depending on the degree of dilution, different degrees of colour were produced. My choice then fell on a small plate and the colour blue. Since I had good friends at work and I was feeling well-rested, I tried to paint the TUI BLUE logo. I drew the logo directly on the plate with a pencil, then painted around it with blue. To make the colour appear paler outside, I dabbed it unevenly with a sponge. The plate also had to dry and then be fired in the oven. The graphite of the pencil would flake off in the kiln and reveal a hopefully white logo. 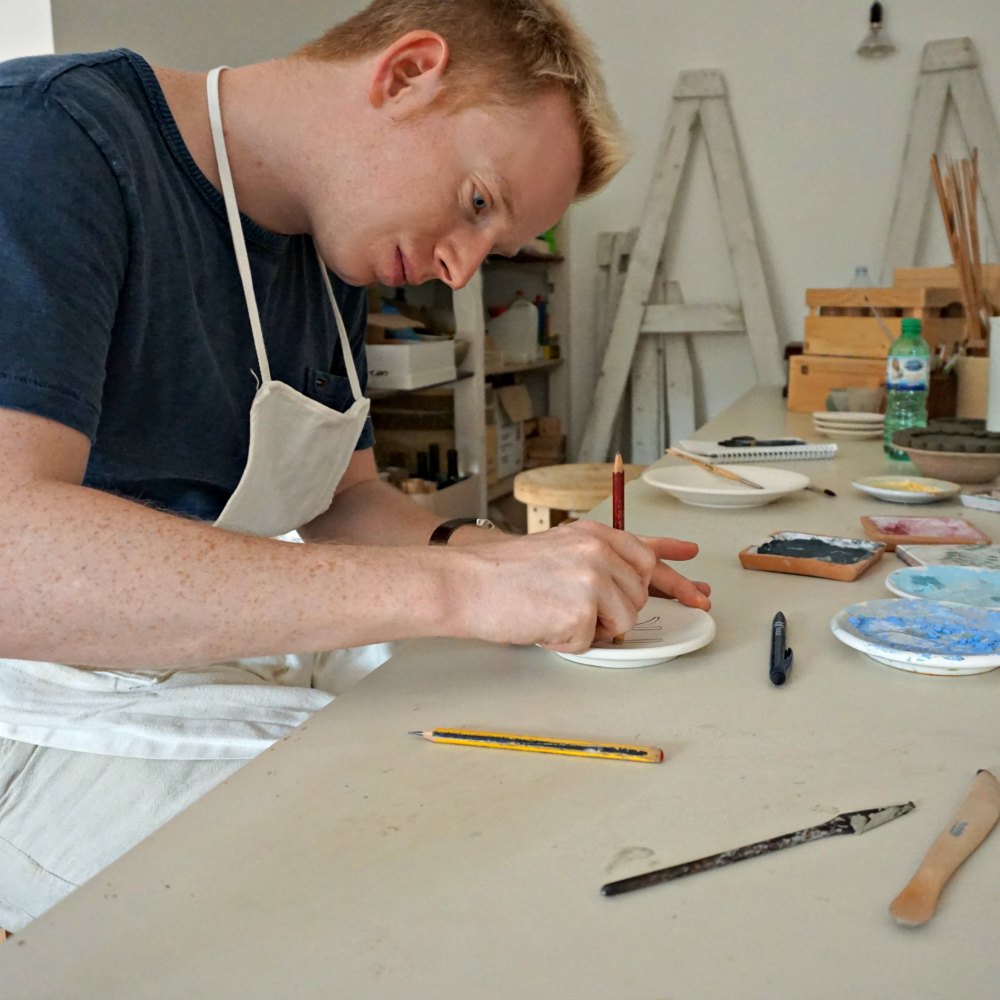 That was it! Time had flown by, as had my prejudices against the pottery class. I learned a lot about the craft, found myself totally relaxed during the different exercises, and was very proud of the results of my work. The pottery class also brought a smile to Miri’s face. We can’t wait to hold the finished artwork in our hands. Finally, we thanked the master potter Catia and said goodbye until next time! 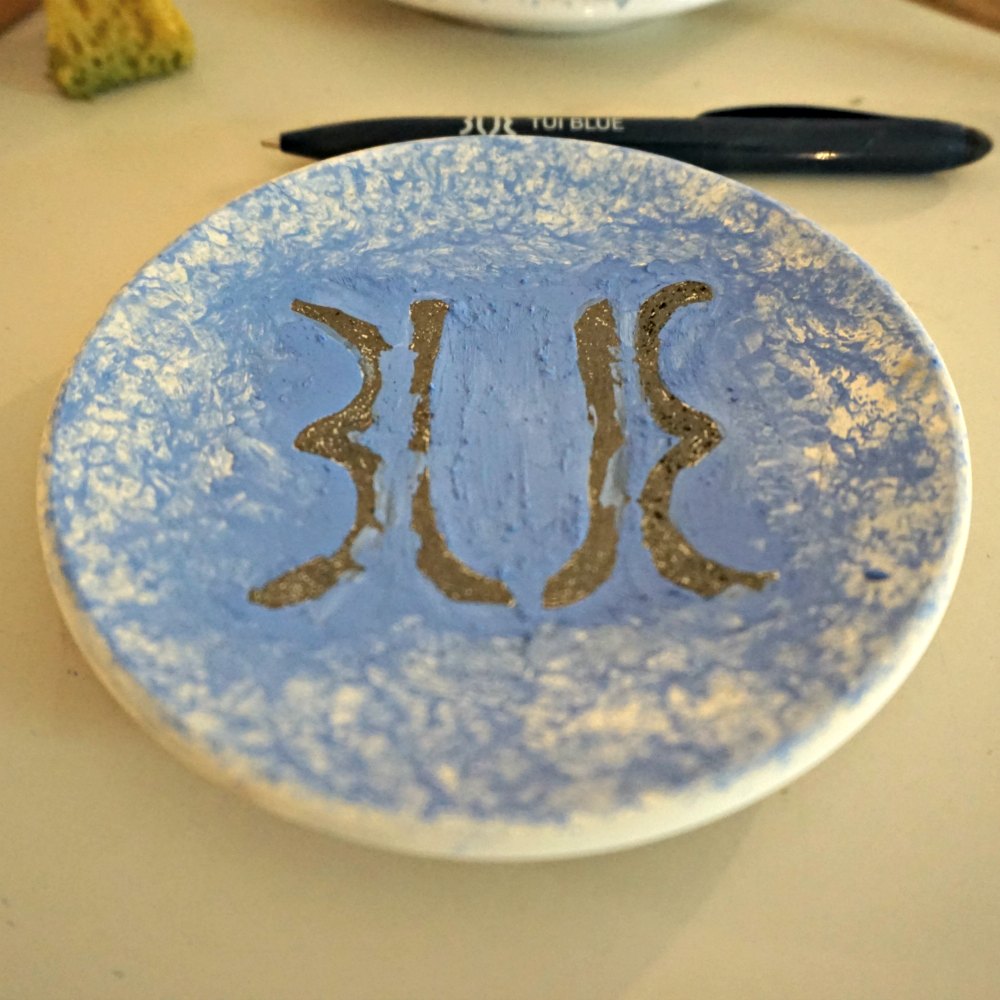 Almost finished! After firing, graphite and excess paint burn off the plate

By the way, if you’re only a short-term guest in Castelfalfi and can’t wait for your masterpieces to be finished in the kiln, Catia is happy to send them home to you by post!