Parasailing at TUI BLUE: Free as a Bird

13 Jan Parasailing at TUI BLUE: Free as a Bird

“We’re doing parasailing,” Barbara said to me with shining eyes. I beg your pardon? Almost immediately, we were registered on the BLUE App for a beginning parasailing course and were at the start site a short time later. What have I gotten myself into…

Gliding over Side and Manavgat on the Turkish Riviera, the open ocean is as blue as blue can be. Normally. On the day we went, it was interrupted by white clouds, which spread out along the horizon. The sun, however, was shining with unbroken force; in Manavgat, it was 32 degrees Celsius that day. Like many other guests, my friend and colleague, Barbara, and I had decided to hang out at the TUI BLUE Palm Garden‘s private beach and spend a day at the seaside – the only place where we could catch a semi-cool breeze. While relaxing in a lounge chair, I glanced beyond the horizon. Suddenly, a colourful spot in the sky distracted me. I blinked. A dragon? No, a paraglider! Barbara had also seen it and was immediately fired up. She pulled out her smartphone and opened the BLUE App, on which she registered us both for paragliding in just a few clicks. She then grinned triumphantly and said: “There’s no turning back now!” Pulled by a boat, we glided across the open sea

Parasailing. Before heading from the beach back to our rooms, I quickly googled the most necessary basic info about parasailing – Thank you, WiFi on the beach! I found that “parasailing”, since 1970, has been the common term for flying with a steerable parachute behind a vehicle, in particular a boat, and that in most European countries a license is required to oversee the aerial sport – so there’s a flight instructor there the whole time. This was confirmed when we arrived at the boat station. The flight instructor was already on the deck of his boat, which was equipped with a kind of landing platform with all sorts of harnesses and straps. With that, we drove out to sea. The instructor explained that the wind conditions for starting were better farther out, so we secured our life jackets. We learned how the device worked in a briefing. In our case, the chute would be attached to a long line on the boat – after all, as beginners we wouldn’t be able to fly it ourselves.

Shortly before parasailing, we heard: “Excited? Come on!”

“Who wants to go first?” The flight instructor looked at us questioningly. Barbara volunteered. I gave her two thumbs up and watched as she was strapped in the harness of the parasailing chute. From the beach, I watched as she went out to sea with the flight instructor and eventually rose with the ruffled paraglider into the air. I wished I could see her face! Fortunately, a GoPro camera was capturing the flight, so I could enjoy that later.

About 20 minutes later, Barbara was back: “That was awesome! You can see EVERYTHING. Perfectly.” Now I was excited. After I was strapped in, we went out to sea. The driver of the boat maneuvered it so that we are in optimal alignment with the wind and the glider slowly and evenly inflated. “Have fun, here we go!” He called to me, and I already noticed I was taking off. The boat under me was getting smaller and the sea was getting bigger – madness! I was flying! In my shoulder straps that were attached like a little swing, I felt very safe, despite the slight rocking motion. The view I had enjoyed from the beach that morning was now below me. Wide open spaces surrounded me and the cool wind was wonderfully refreshing. I had a view of the entire stretch of coast, where people on the beach looked like tiny miniatures. I remember thinking that it’s probably this strong feeling of freedom that inspires so many to do parasailing. Something else surprised me: how quiet it was. Even the sound of the sea just 50 metres below me was only muffled to my ears. I found it almost relaxing to float so high up, but my adrenaline level was probably still too high–who would have thought that I would ever try parasailing? 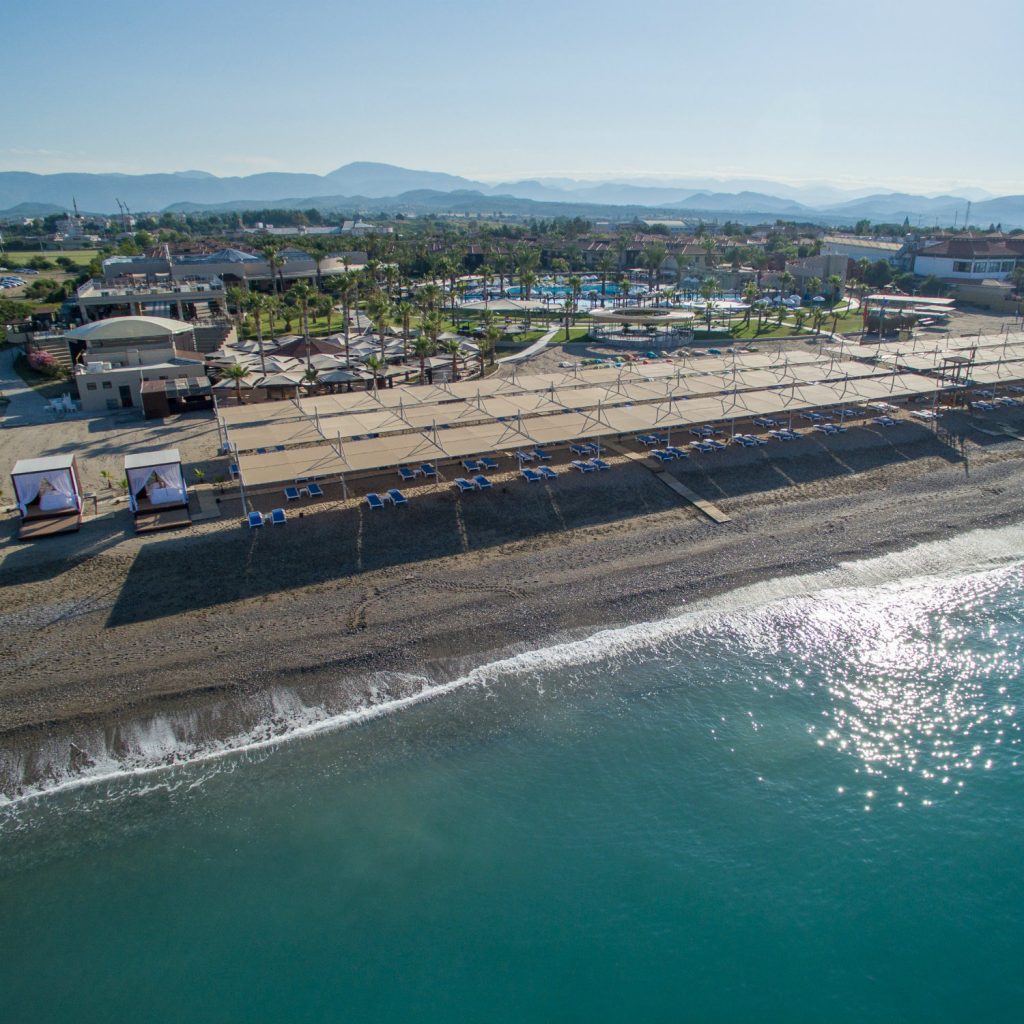 View from above of the TUI BLUE Palm Garden

As I was slowly drawn back to the boat after 15 minutes, I gazed at the view once more and tried to record the moment in my head. This was a memory that I will never forget!

By the way: Those who prefer floating in a mountainous landscape to flying over the sea can do so from the TUI BLUE Schladming in beautiful Austria. Have a good flight!