Paragliding or Fear – There Can Only Be One

28 Jul Paragliding or Fear – There Can Only Be One

I’m a klutz and I have a fear of heights. And I’m supposed to participate in the paragliding intro class. Is this really a good idea? The staff at the TUI BLUE Schladming hotel made this activity sound appealing to me, since it’s a must for a holiday in the Schladming-Dachstein region. I took that to mean that you should get out of your comfort zone and try something new. With a bit of a queasy feeling, which was exactly what I expected, I drove with other participants from the hotel to the Aufwind Flight School at Ramsau am Dachstein, which lies at the foot of the breathtakingly beautiful Dachstein-Tauern mountain range. Of course, we weren’t going to jump off high mountains with the paraglider; we practised on a beginner’s hill, fortunately. First came the preparation: each participant was given a rucksack with a paraglider and a helmet. The rucksack was to be kept on during paragliding (as was the helmet, of course), since the paraglider was attached to it and the rucksack was padded to protect the buttocks and back in case of a fall. Additionally, the paragliding rucksack was shaped in such a way that it could be used during the flight. But we were still far from that.

Preparation Is Half of Paragliding 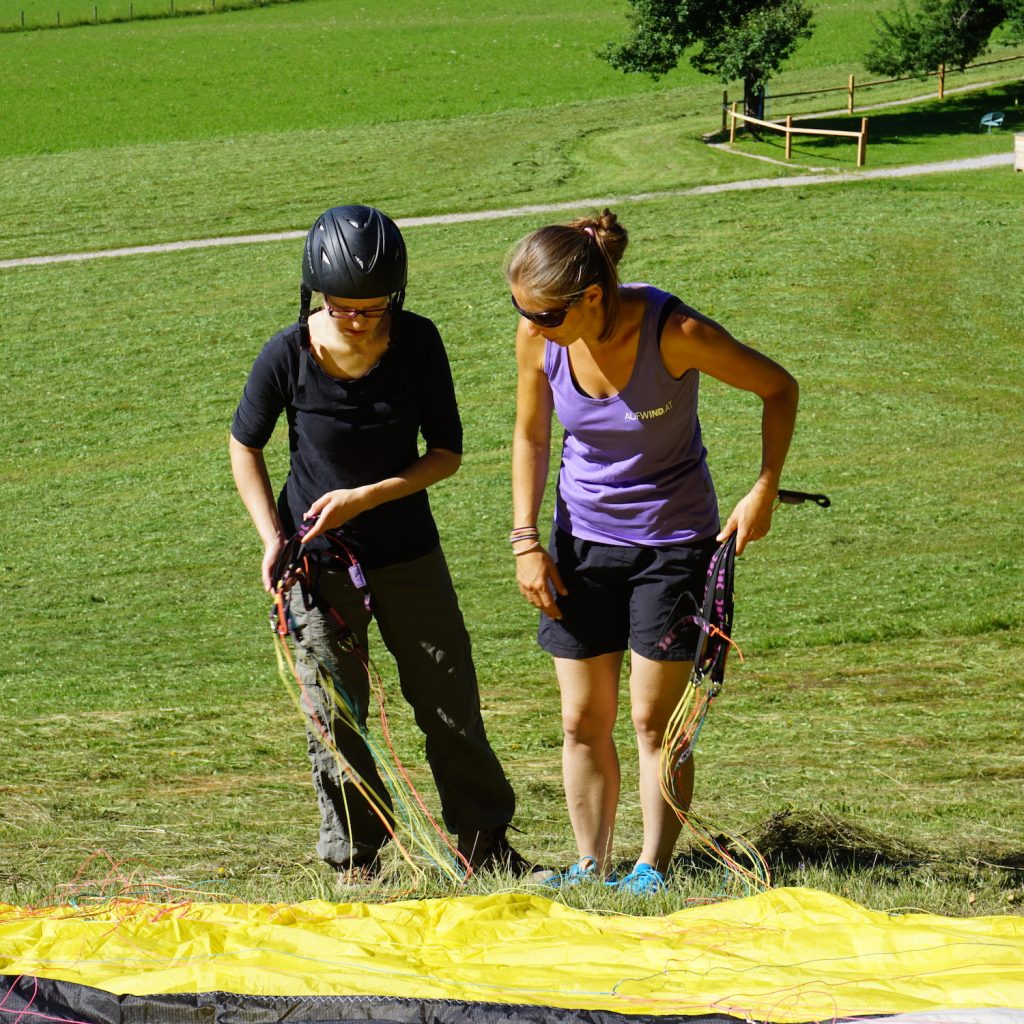 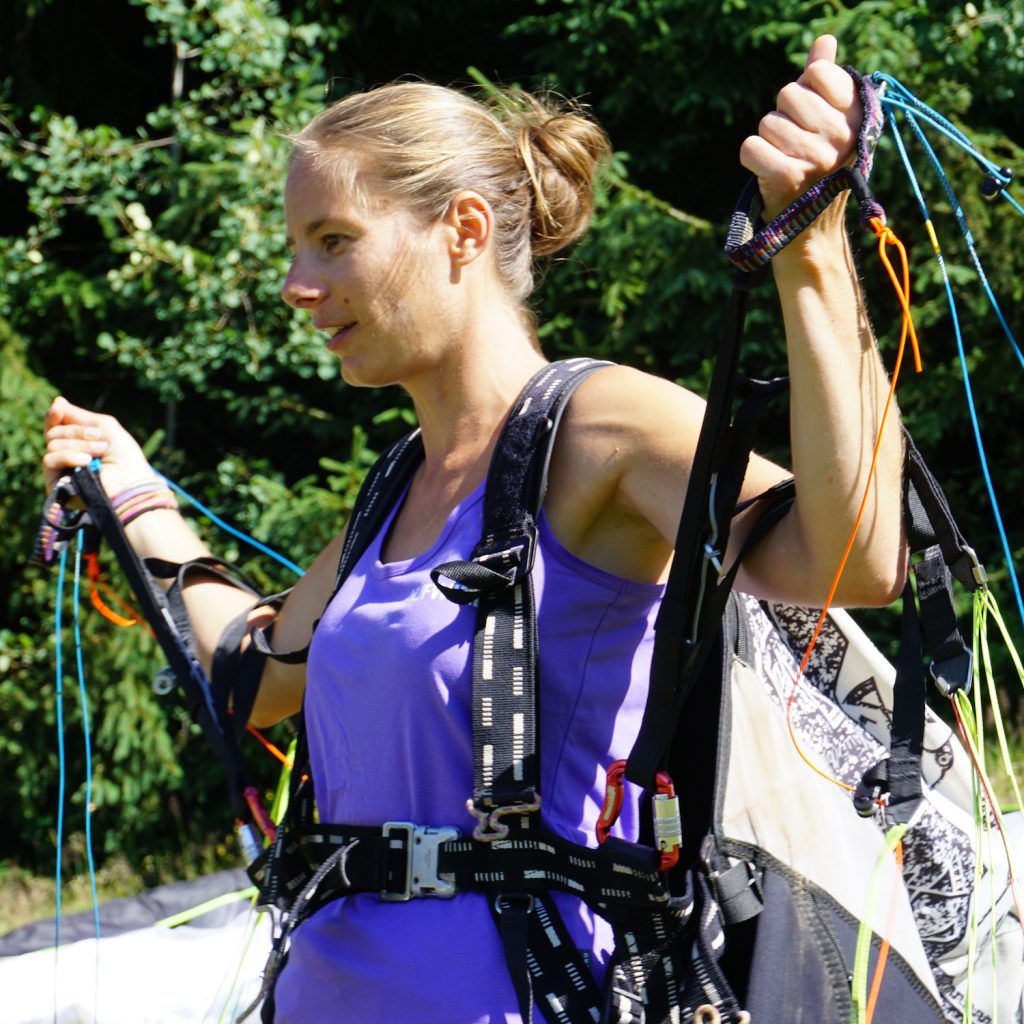 Sandra shows us how to hold our arms

Sandra, our class instructor, was an experienced paraglider and you could tell that she knew what she was talking about. That calmed me down. “You’re not going to fly away, but just go a few metres off the ground.” That was good to hear. We put on the rucksacks and Sandra checked to see if we were all strapped in properly. The rucksack looked like a snail shell, and we proceeded to move, snail-like, up the freshly mowed lawn. The rucksack was heavy and the sun was burning brightly in the sky. We spread out our paragliders on the ground. There were many colourful strings that confused us at first, and the strings must have also been confused because we had to unravel them according to a principle that Sandra explained to us. Each colour had a function: braking, controlling, clamping the paraglider, and so on. While the strings were tangled, the chute couldn’t stretch and the adventure couldn’t get underway. Each student, therefore, placed the strings one-by-one between the chute and himself according to the principle mentioned before. Sandra checked in with everyone on the radio. She gave us instructions when we were ready to go. Now we had to listen carefully: Sandra explained how we had to hang the carabiners with the straps, putting one end over our arms while keeping the brake line in our hands. She checked once more to make sure everything was right.

“At first, you’ll be confused, because you have to carry out several movements at the same time to open the chute and take off,” Sandra explained. And that was exactly my problem. I can’t even swim because I can’t coordinate my arms and legs at the same time. As my swimming instructor put it: “When you swim, it looks like a dog is drowning.” I was already starting to doubt myself, although Sandra the professional paraglider did tell us that it would take a while before we got the hang of it. Sandra showed me at what angle to hold my arms before running, and then to spread out my arms and release the lines – except for the brake line – when the paraglider had stretched. And then it should be smooth sailing. Sandra used a cloth strip on a bar to check whether the wind was favourable. “The best wind will either come from the front or be no wind at all. Wind from the side or the back will blow your chute.” 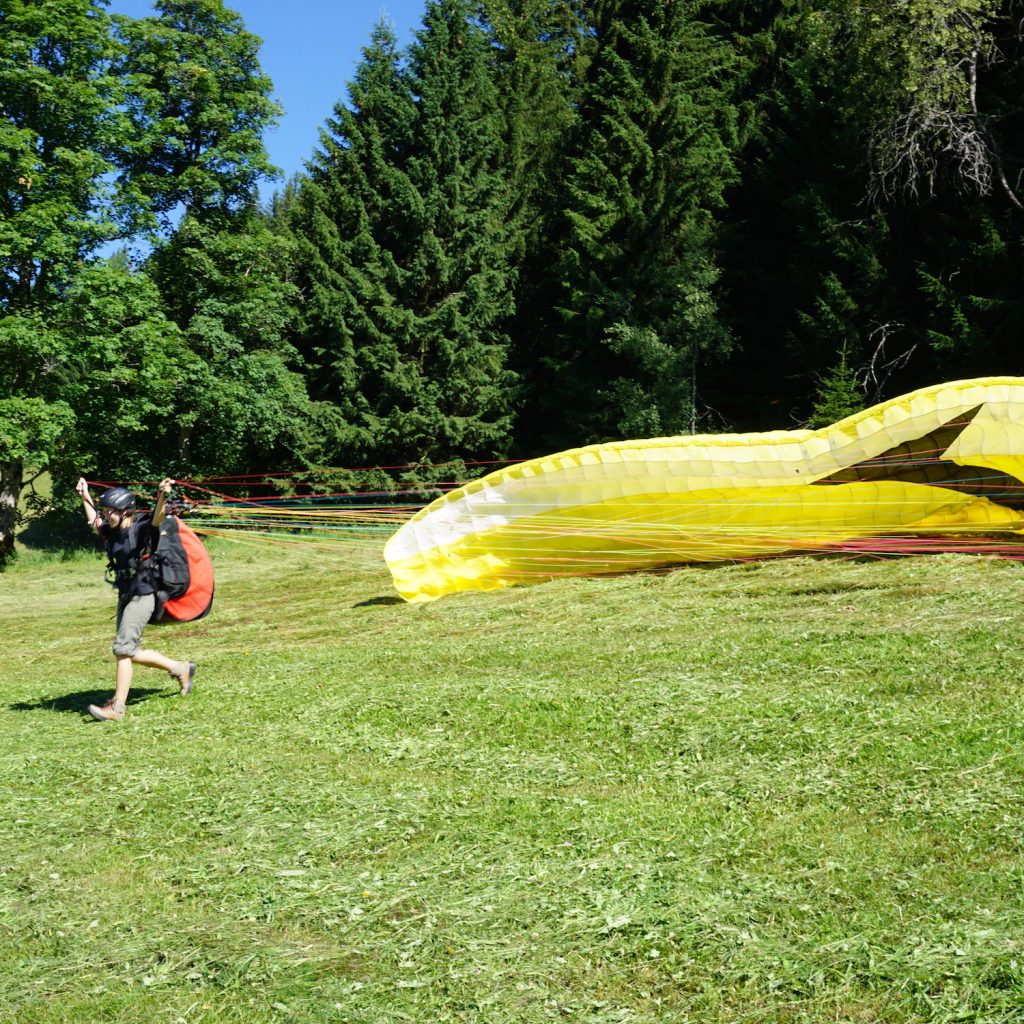 Following Sandra’s lead, I ran down the slope with my arms bent upwards and noticed that the paraglider was slanting behind me before falling into itself. Sandra consoled me, “That’s usually the case at the beginning.” In fact, the others also had their own initial difficulties with paragliding, and it would take several more runs before we took off. So I gathered up the paraglider, trudged up the slope, and spread out the chute again according to the tried and tested principle. We were making progress (well, the others more than me) and with each pass, the chute straps would get tauter and the chute would lift a little higher off the ground. And this is how I was introduced to paragliding. I was now motivated to take off, even though I couldn’t feel my arms when I held them up. When I could get the paraglider to stretch, then it would yank me back with a force that I couldn’t fight. Sandra yelled, “Run!”, but it felt like a dream wherein my legs were made of pudding and I couldn’t get away. And then the paraglider would fall back together and the whole game would start over. One time, I drifted off and the chute landed in the manure heap of a neighbouring farmer. It was already dry thanks to the heat, but it wasn’t pretty. 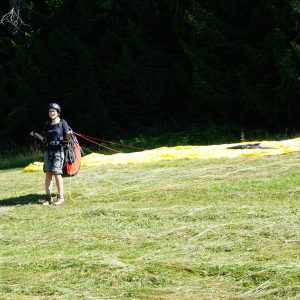 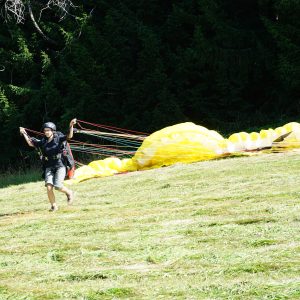 One of the participants, Martin, hadn’t been paragliding in ten years. He worked at the TUI BLUE Schladming and was raving about the flying there. He wanted to start paragliding again, and he was the one who made the fastest progress. He lifted a few times and sailed many metres. I admired him and was frustrated at the same time. I didn’t want to fly that far or high. I was torn. 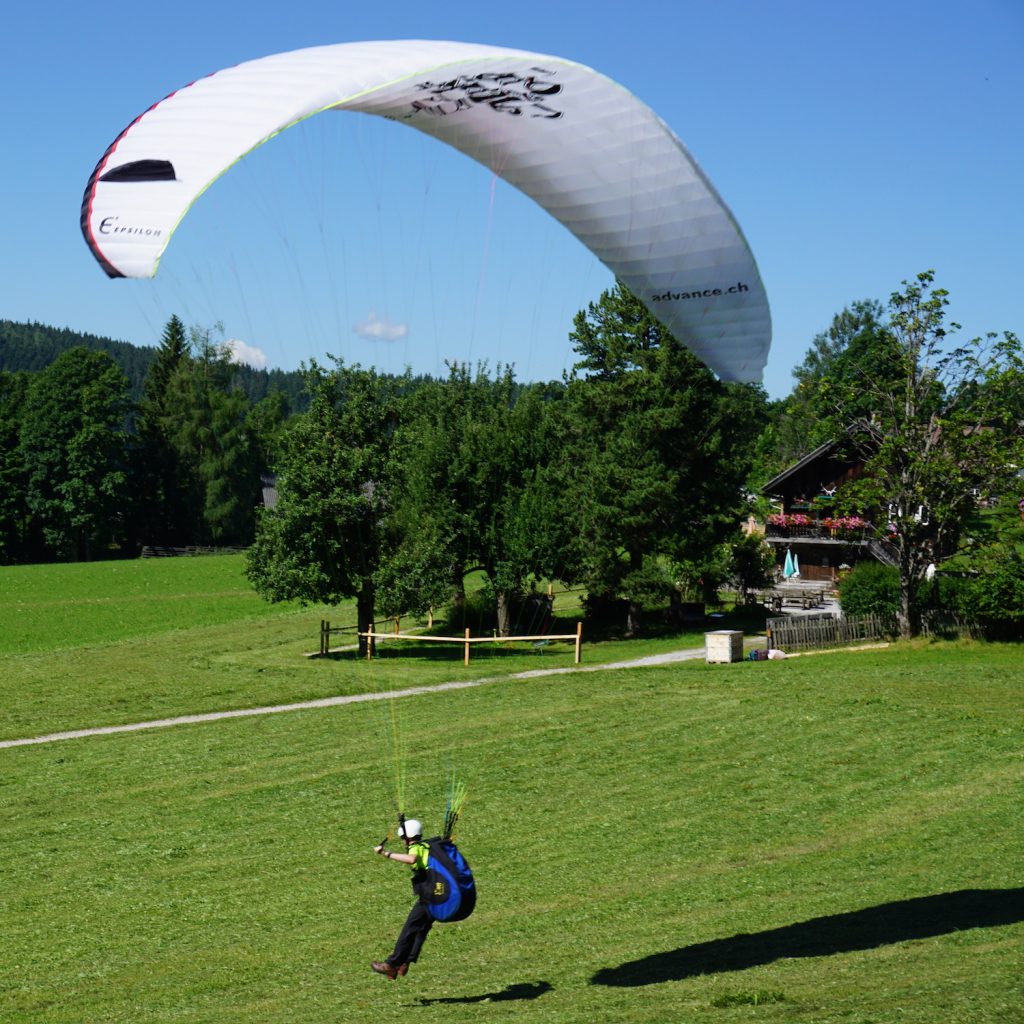 I Get Up, Nothing Holds Me Down…

After many (sometimes futile) paragliding attempts, we started on a steeper slope. The wind had picked up – ideal conditions for paragliding. We were all worn out by the heat and running up and down the slope. I watched as others took off from the ground, glided just above it, and then pulled the brake line after a few metres at Sandra’s command. I was envious and also somewhat demoralised. I have to say that it was our instructor, Sandra, pushing us and praising us that got me through it. Now it was my turn. Sandra checked the wind conditions again. “Excellent,” was her judgment. I ran, lifted my arms, felt the paraglider picking up, and – whoosh – it hoisted me upwards! I let out a sharp shriek. That was fast. And high! After a few seconds, I got down, lifted up again, and slid a few metres. When I landed, I pulled the brake line and the paraglider fell together. Wow! The troops on the slope were cheering and applauding. Martin clapped me on the shoulder. My flight was captured on video and I laughed when I heard my death cry (you have to turn on the sound!) And see my flailing legs. I was really proud of myself and glad that I had taken part in the paragliding intro class. It must be an incredible feeling to glide over the Styrian alpine pastures and see the world from above. And, at the same time, the height and surrender has to be somewhat unnerving. Immediately afterwards, my colleague, Dirk, did a tandem flight from the Planai mountain (1,906 metres high!!!) and a part of me also wants to – another part of me has a fear of death. We put the paragliders back together carefully and packed them in our snail-shell bags. Sandra from the Aufwind Flight School did a great job and I can recommend the paragliding intro class to fear-chasers and adrenaline junkies. If you get a taste for it, you can get a paragliding license after a lot of training and discover the world from a bird’s eye view.

The paragliding intro class and many more flying activities are offered by the Aufwind Flight School in Ramsau am Dachstein/Austria. Participation is free of charge with the Schladming-Dachstein Summer Card on Saturdays and Sundays (weather permitting). The base for our adventures was the Hotel TUI BLUE Schladming, where the staff are really knowledgeable about the adventure sports in the area. The Schladming-Dachstein Summer Card is available there free of charge with a night’s stay. With the card, you can get many free admissions or discounts on attractions in the region.