Mountaincarting: Down the Mountain on a Tricycle

18 Aug Mountaincarting: Down the Mountain on a Tricycle

We had split up for paragliding, but Miri and I needed to stick together once we were back on the ground for mountaincarting. The crazy tricycle sport from the Alps was next on our agenda. We were accompanied by Heike and Michi from the TUI BLUE Schladming and Andrea from IN-A-TEAM.

No Descent without Height

Of course, before we went down the mountain together, we first had to climb it. In this case, the cable car on the Hochwurzen, a mountain on the northern edge of the Schladminger Tauern, worked quite well for us. In just a few minutes, we were easily able to ascend to more than 1,800 metres in a gondola and enjoy breathtaking, unobstructed views of the Dachstein massif. Once at the top, the first path out of the gondola led me directly to the next viewing platform to once again revel in the unbelievable panorama without glass in front of my face. The part of the Dachstein massif across from me looked stunningly surreal from here. When I paint a picture of Austria in my mind in the future, it will look like that. With the rays of sunlight warming my face and the sky glowing a bright blue, I could hardly wait to finally race the mountaincart down into the valley. The views of the Dachstein massif were stunning

“We were almost killed!”

We still had some time before the first group of daring pilots started off. We killed some time with a drink on the terrace of the Hochwurzenhütte and Michi reflected on his last experience with mountaincarting. Again and again, he dropped the line “we were almost killed!” Sounds like fun…not! Now I was getting a little nervous, especially since Michi was already hatching a plan to challenge us to a race. These are forbidden on the seven-kilometre descent with the mountaincarts, and the rest of our group was therefore equally dismissive. Michi’s eyes sparkled suspiciously. 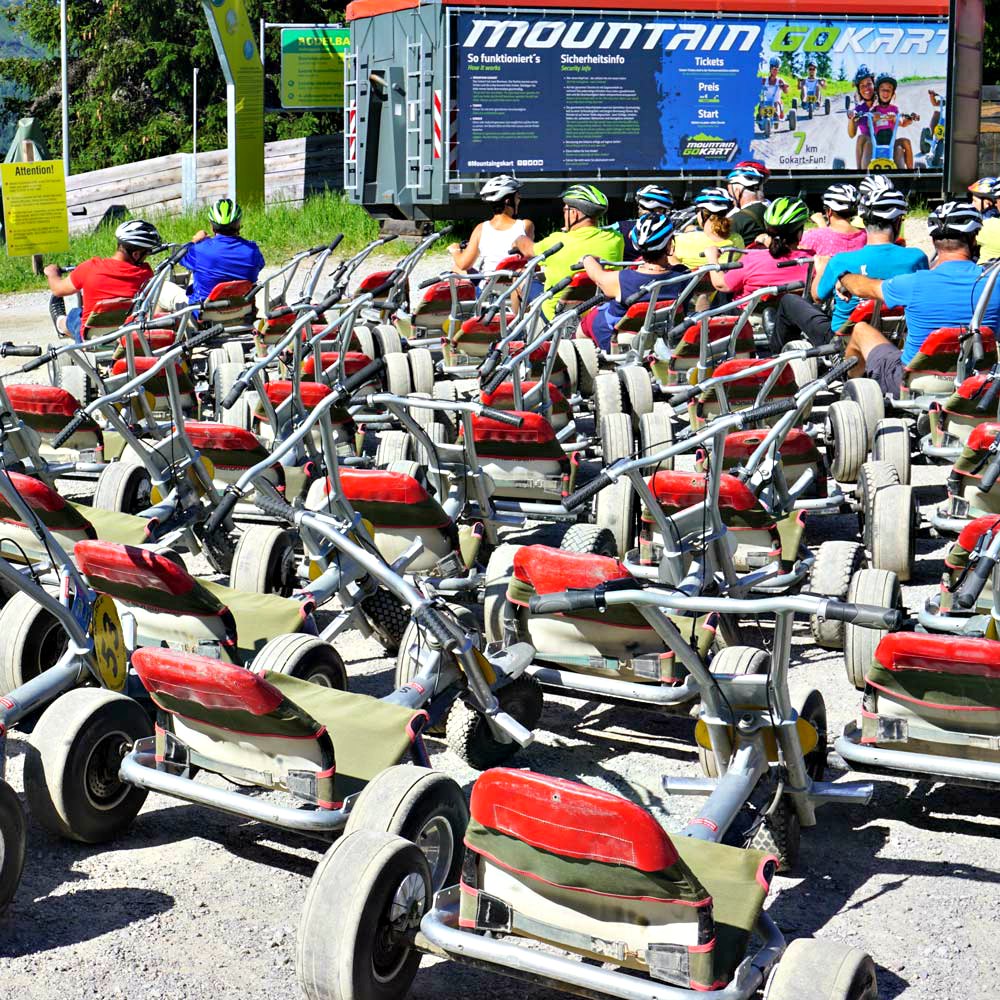 The mountaincarts are ready to take off 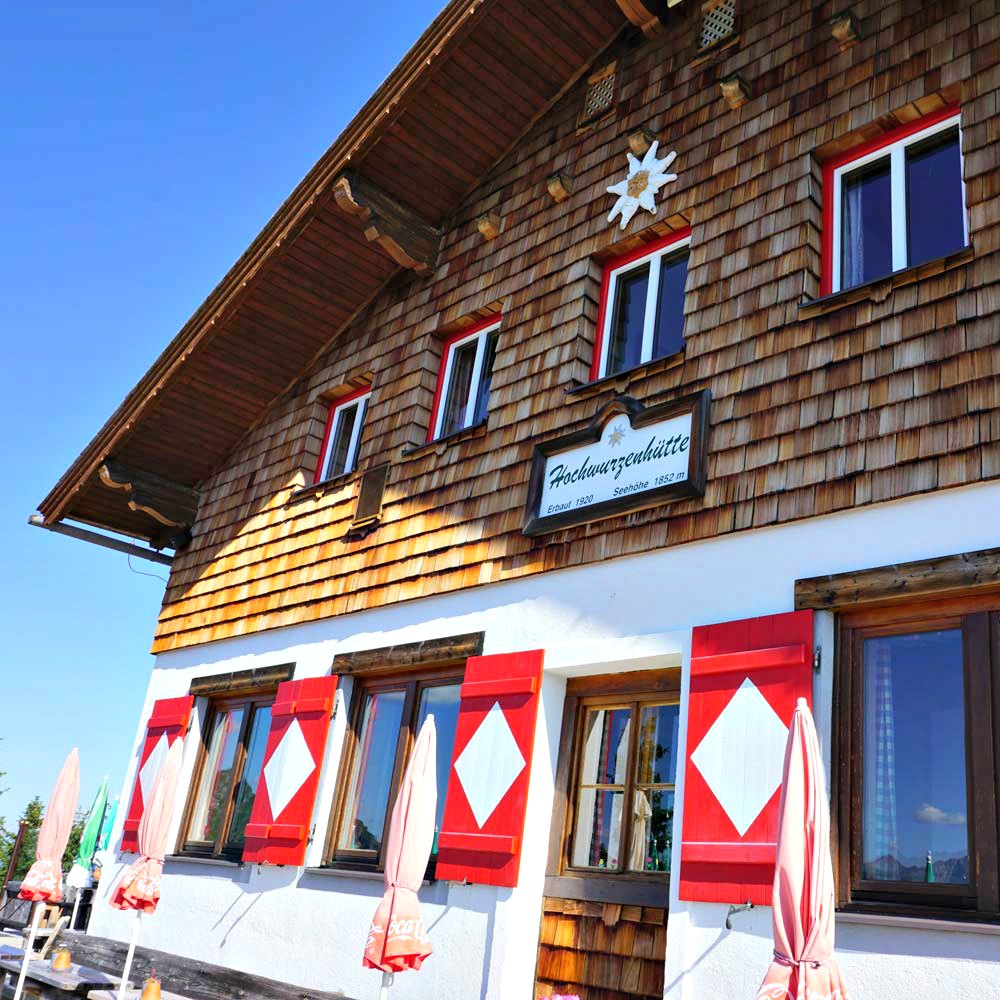 What a view of the Dachstein massif

It was almost ten o’clock and we were on our way to the starting point. There, sitting close together, were mountaincarts of various sizes. Participants could take a helmet from a big box on the side of the road – there was no other safety equipment. At Andrea’s suggestion, we had also brought our sunglasses. These were to protect our eyes, not just from harmful UV rays, but also from flying pebbles that might be kicked up by riders in front of us. Two employees from the provider, Mountain GoKart, helped us find the right size of mountaincart and explained how it worked. We had to push ourselves off by foot – there were no pedals. The device had a low centre of gravity, wide wheelbase, ergonomic seat, and hydraulic disc brakes. The brakes worked similarly to bicycles and motorcycles, with levers on the left and right handlebars. In contrast to other two-wheeled vehicles, the mountaincart’s brakes weren’t on the front and back, but the left and right. This made it possible for the small vehicle to drift around bends as needed. In my mind’s eye, I could already see myself drifting at high speeds around switchbacks with nothing but a cloud of dust behind me. Now let me go already! Taking the first turn at a casual pace

The guide gave the signal to start and the first driver in our column was set in motion. We let Michi go ahead so he could satisfy his addiction to speed. I crawled my mountaincart forward until the natural slope of the mountain took over. I approached the first curve even more leisurely and passed it skillfully. What immediately struck me was the tricycle’s precise handling, and – on the other hand – the sensitivity to the smallest of bumps. I rolled on a long, straight stretch before the speed really picked up. The small frame shook as I reached the next turn, which I bravely passed, almost without braking. The next stretch led into a U-turn, which I conquered more or less successfully by braking on only one side and drifting through. True to the saying: Go diagonally, see more! I became more courageous with each sharper curve and steeper descent, which drove my adrenaline levels up. Michi barely got warmed up. Our experienced mountaincart pilot, who knew the route inside and out, occasionally waited for myself and the other riders to catch up, just to overtake us twice as fast. But I was also able to make some skillful overtaking manoeuvres on the seven-kilometre track. Nonetheless, caution was advisable. Mountaincarting is not only for reckless adrenaline junkies, but also for young families with children. 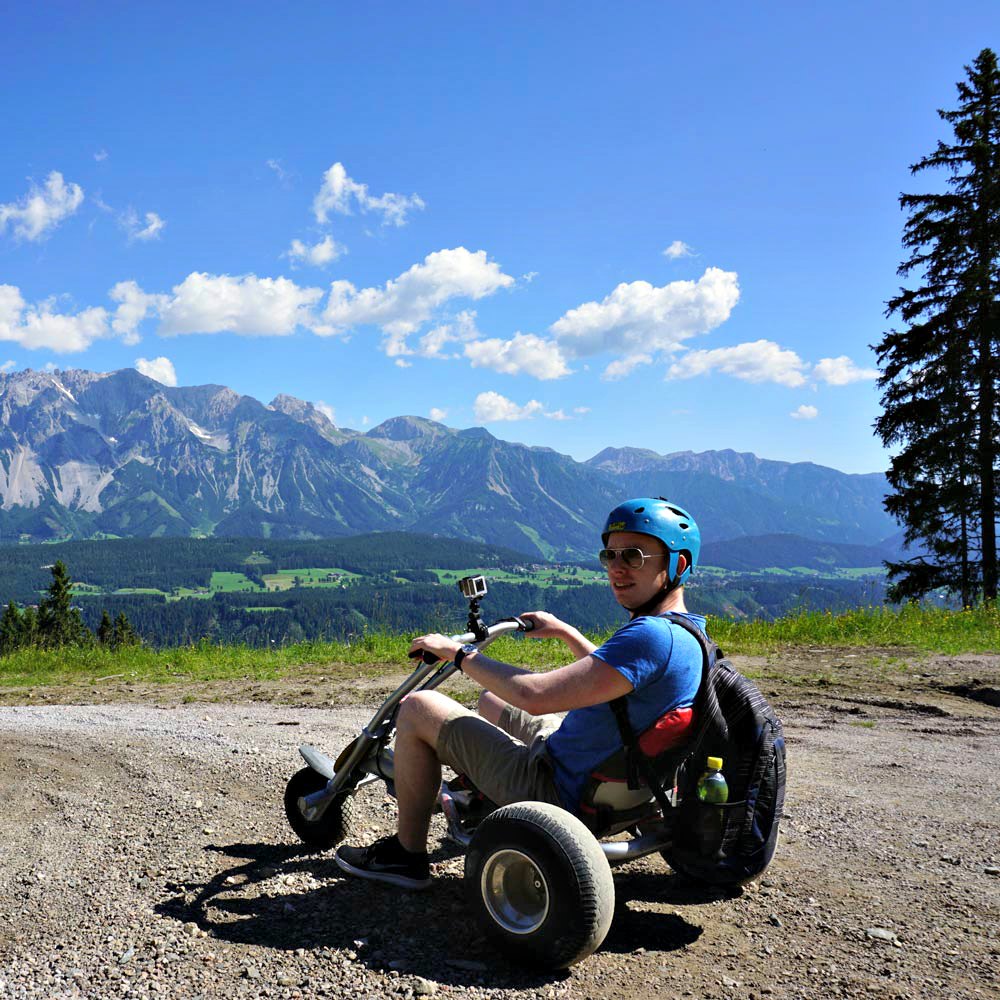 Stopping here for a photo was a must

The closer I got to the valley, the more I felt “at one with the machine”. The last passages came rapidly, and just as I got in the zone, the fun was over. As I approached the valley station, I had to brake for the last time and – with a heavy heart – be separated from my mountaincart. What an experience! I wanted to go again! But, unfortunately, it wouldn’t be today as we had a tight schedule. I took off my helmet and cast a final glance up at the summit. I rode down from there on a tricycle? Nice. Then I can recommend it to everyone!

Moutaincarting is offered by Mountain GoKart on the Hochwurzen in Austria. Discounts are possible with the Schladming-Dachstein Summer Card. The base for our adventures was the TUI BLUE Schladming hotel, where the staff are really familiar with the adventure sports in the area. The Schladming-Dachstein Summer Card is available there free of charge with a night’s stay. With the card, you can get many free admissions or discounts on attractions in the region.