The Most Interesting Places in the Algarve | TUI BLUE Blog
27065
post-template-default,single,single-post,postid-27065,single-format-standard,ajax_fade,page_not_loaded,,qode-child-theme-ver-1.0.0,qode-theme-ver-9.1.3,wpb-js-composer js-comp-ver-4.9.1,vc_responsive

Explore the Most Interesting Places in the Algarve

11 Apr Explore the Most Interesting Places in the Algarve

The most popular holiday destination in Portugal is the Algarve, the beautiful coast on the southern side of the country. The region boasts enchanting beaches, from bizarre rock formations over long, fine sandy beaches to the rugged west coast. But the many historic old towns are also definitely worth a visit. Small alleyways with cosy cafés, restaurants, and shops exude genuine Portuguese charm and invite you to take a stroll. Discover the most interesting places in the Algarve with me. 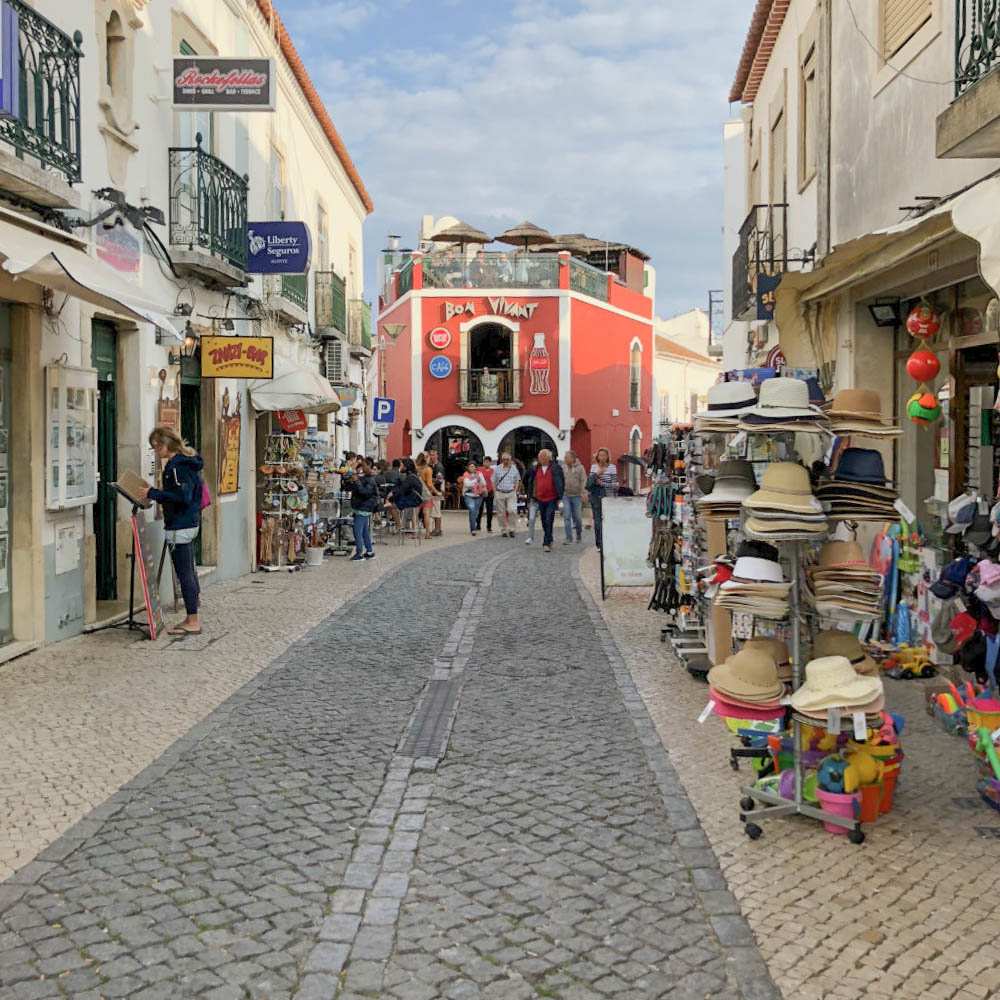 The typical picture of a Portuguese old town: small alleys and nice shops.

It’s best to hire a car while on holiday and start your own little coastal roundtrip to the most interesting places in the Algarve. My journey of discovery begins at the TUI BLUE Falesia. Of course, there are also organised excursions to the cities in the Algarve. To find out the best excursion options, check with the BLUE Guides on site or in the BLUE App.
I’ll tell you my top 5 most interesting places in the Algarve within an hour’s drive from the TUI BLUE Falesia.
First Stop: Albufeira…

Algarve Coastal Tour: These Cities Are Worth a Visit

The Vibrant City of Albufeira

After going west for about 15 minutes, I reach Albufeira. Once a small, idyllic fishing village, Albufeira is now one of the most popular cities in the Algarve for summer holidaymakers, who are particularly enthusiastic about the gorgeous coastal landscape with both large and small sandy beaches. Particularly popular are the city beaches Praia dos Pescadores and Praia do Peneco, which are both right next to Albufeira’s old town. Albufeira translates as “castle over the sea”. No wonder, since the old town is situated on a mountain. From here you have a fantastic view of the coast.

In the city, the difference between the high and low seasons is evident. In the summer months, Albufeira is a vibrant city. Bars and nightclubs invite you to long nights and an exciting nightlife.
In the winter and the low season, the city of Albufeira shows its original and quiet side. 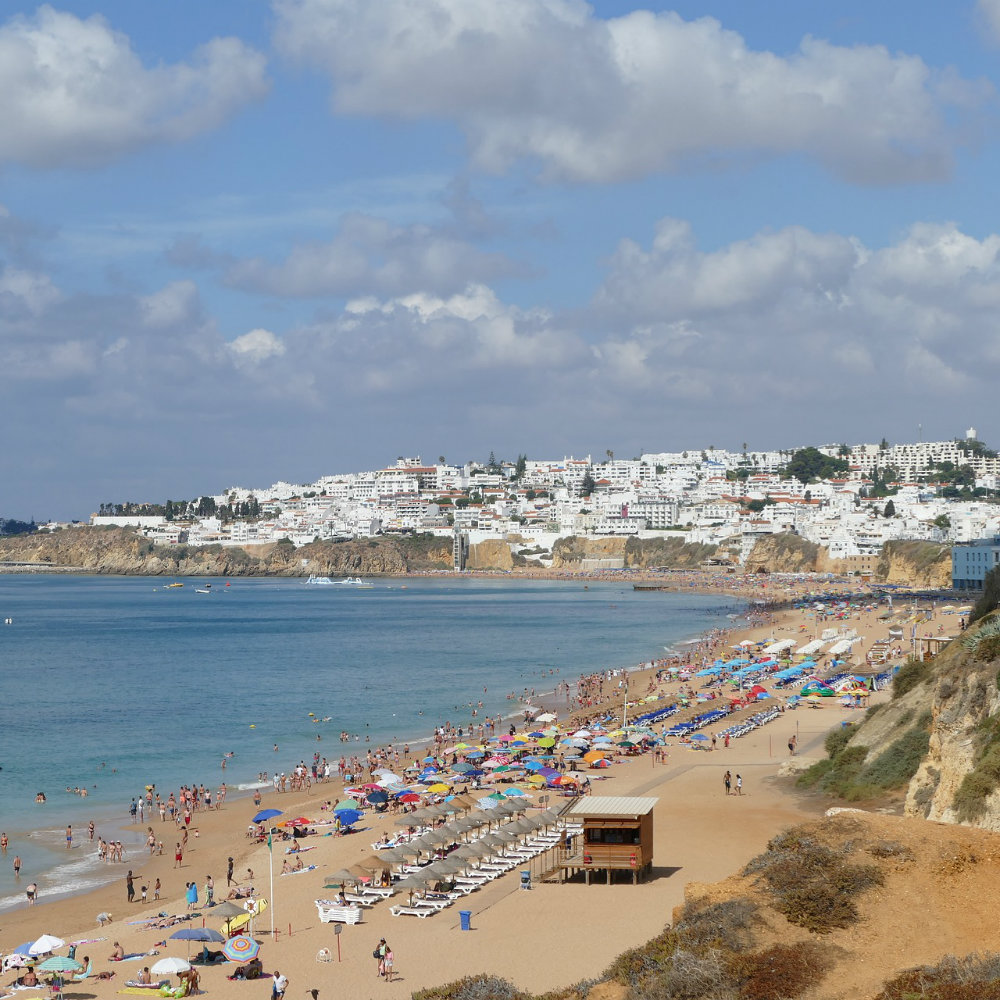 Portimão – The City with a Long Fishing Tradition

A little farther afield, about 45 minutes from the TUI BLUE Falesia, lies Portimão, one of the oldest cities in the Western Algarve. Portimão was originally a well-known centre for fishing and shipbuilding, making the city one of the most interesting places in the Algarve. Canneries thrived here during the 19th century. Today, the Museu de Portimão reminds you of the industrial past, showing exhibitions on regional history in an old factory building.

The old fishing port has now been transformed into a picturesque promenade that leads to the charming old town of Portimão. The old town has a typical Portuguese flair with squares filled with sidewalk cafes and restaurants offering traditional, freshly prepared seafood.

In the coastal town, you’ll find beautiful beaches like something out of a picture book. The calm sea and the clean beach will primarily delight divers, but also families with small children and those looking to relax.
South of the city lie the Praia da Rocha beach – one of the most stunning beaches in Portugal with its ochre-coloured rock formations – and the fortress Forte Santa Catarina. 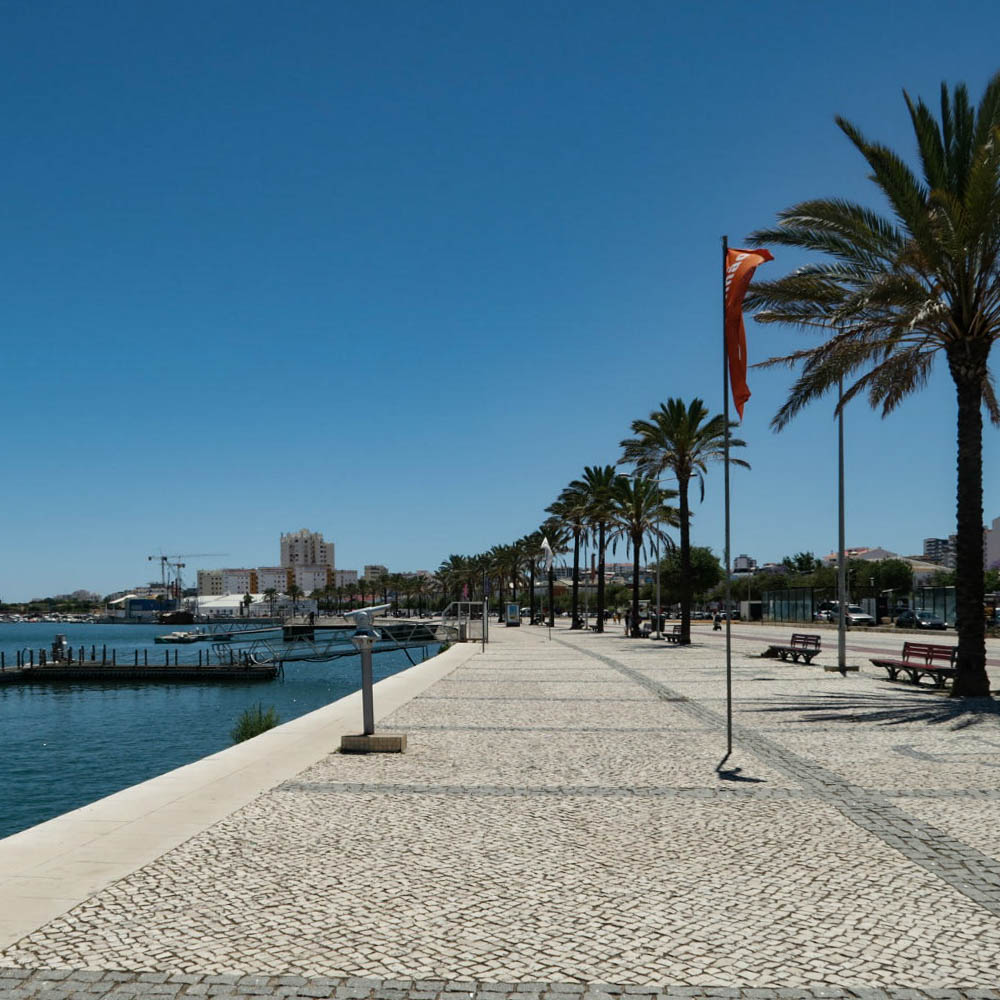 The promenade of Portimão is ideal for long walks.

#roadtripalgarve – Looking for the Most Interesting Places in the Algarve

During the 15th century, important voyages to the New World were launched, like those of Henry the Navigator.
The palm-lined Avenida dos Descobrimentos, translated as the “Road of Explorers”, takes me to the centre of Lagos, past the famous Marina de Lagos.

The historic old town is best explored on foot. In the nested, narrow streets, you’ll find house facades clad in the typical azulejos (tiles). For those interested in culture, it’s worth a detour to the old city gate Porta de São Gonçalo or the fort Ponta da Bandeira. In the evenings, you can stroll through the small streets, eat delicious fish in one of the charming restaurants, and watch the great street performers. 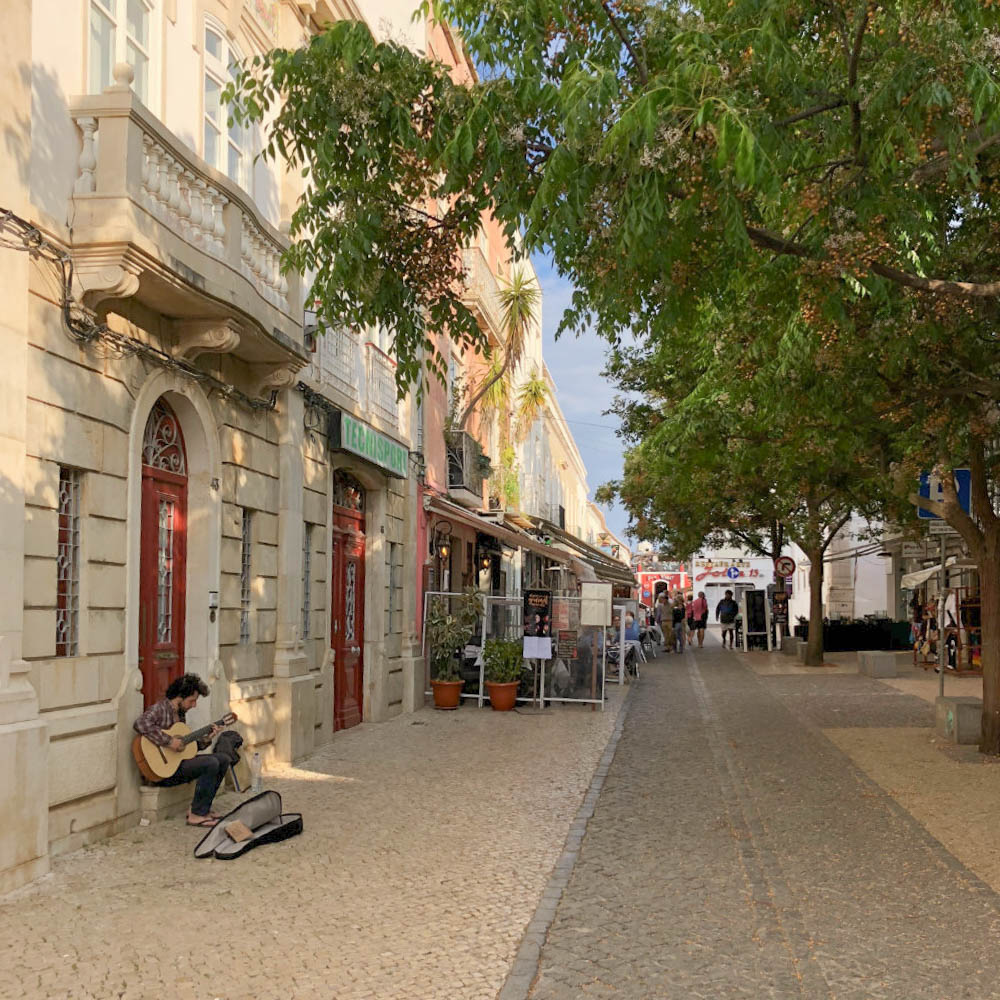 What a Portuguese flair – at every corner in Lagos you will find street musicians.

If you want to see one of the most beautiful natural phenomena in the Algarve, I can recommend the promontory of Ponta da Piedade with its impressive rocks, grottoes, and sea caves. On a boat tour through the mysterious cave world, you’ll be amazed! 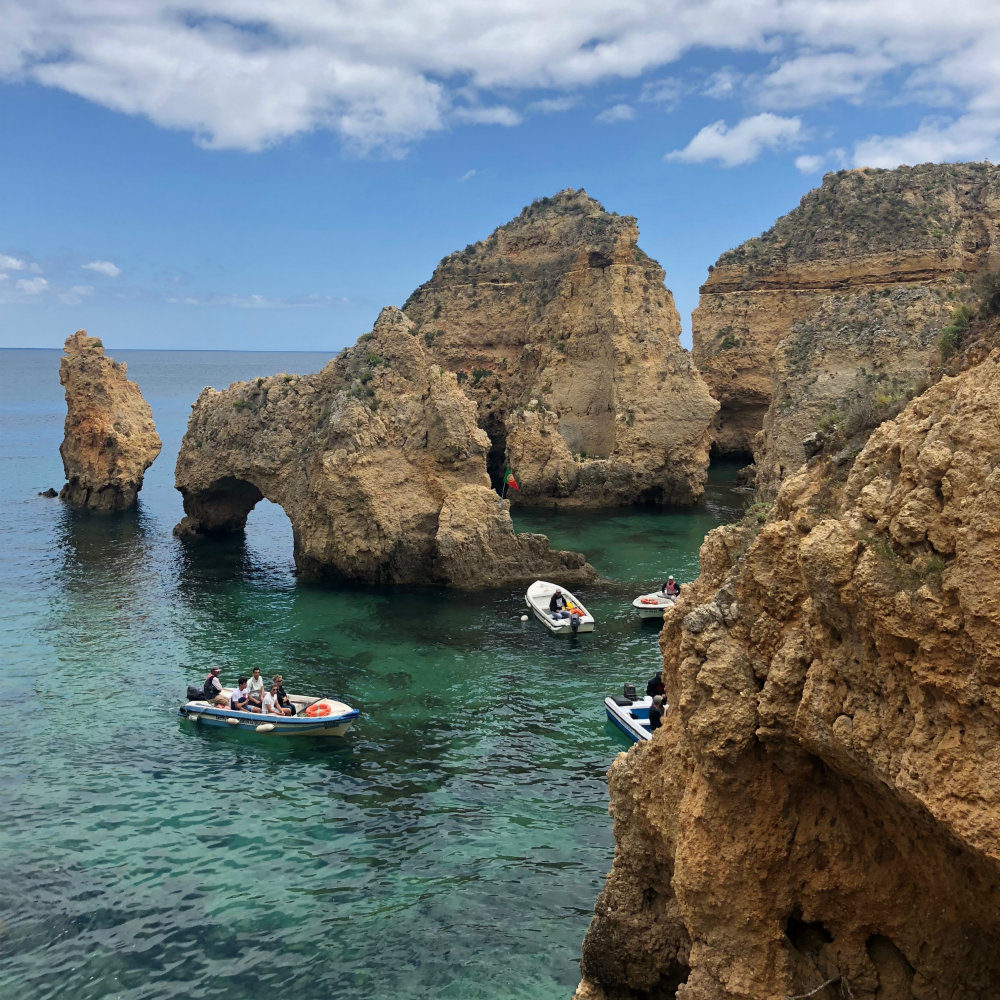 Sagres – The End of Europe

Sagres, the city at the westernmost point of Europe, is a paradise for surfers and outdoor enthusiasts. The city is adventurous and different from any other destination in southern Portugal. Here at one of the most interesting places in the Algarve, the Mediterranean and Atlantic meet. A dramatic landscape, huge cliffs, and the roaring sea characterise the sights in the region. Experience the immense power of nature while surfing, hiking, or sunbathing on one of the sprawling beaches.

At the westernmost tip of the continent is the lighthouse “Cabo de Sao Vicente”, the Cape of St. Vincent. Far from civilisation, you have breathtaking views of the sea and the old fishing port. I can hardly get enough of the steep cliffs!
You should also visit the fortress of Sagres in Vila do Bispo: It used to serve as a geostrategic maritime security system and was once known as the end of the world. Today, it’s a national monument. 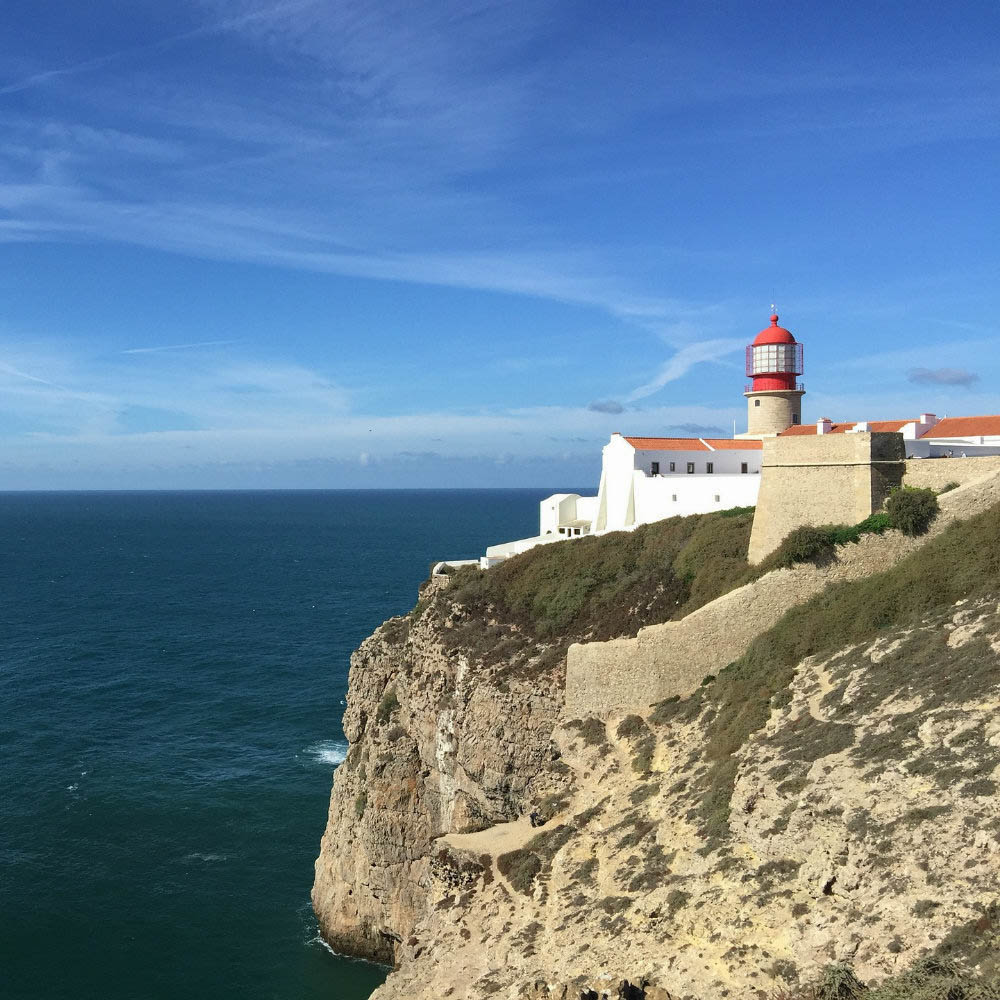 The most western tip of Europe – at Cabo de Sao Vicente in Sagres.

Faro – The Capital of the Algarve

Now we head in a completely different direction.
East of the TUI BLUE Falesia, on the edge of Ria Formosa National Park, lies Faro. You certainly already know the Faro Airport from your arrival, but the city itself is definitely worth a visit. The preservation of the old town of Cidade Velha, enclosed by the city walls, has kept Faro’s traditional charm. Walking through the narrow streets, surrounded by Portuguese and Moorish architecture from the 18th century, it feels like a little trip back in time. My tip: From the magnificent Sé Cathedral, you get a magnificent panorama of the city. 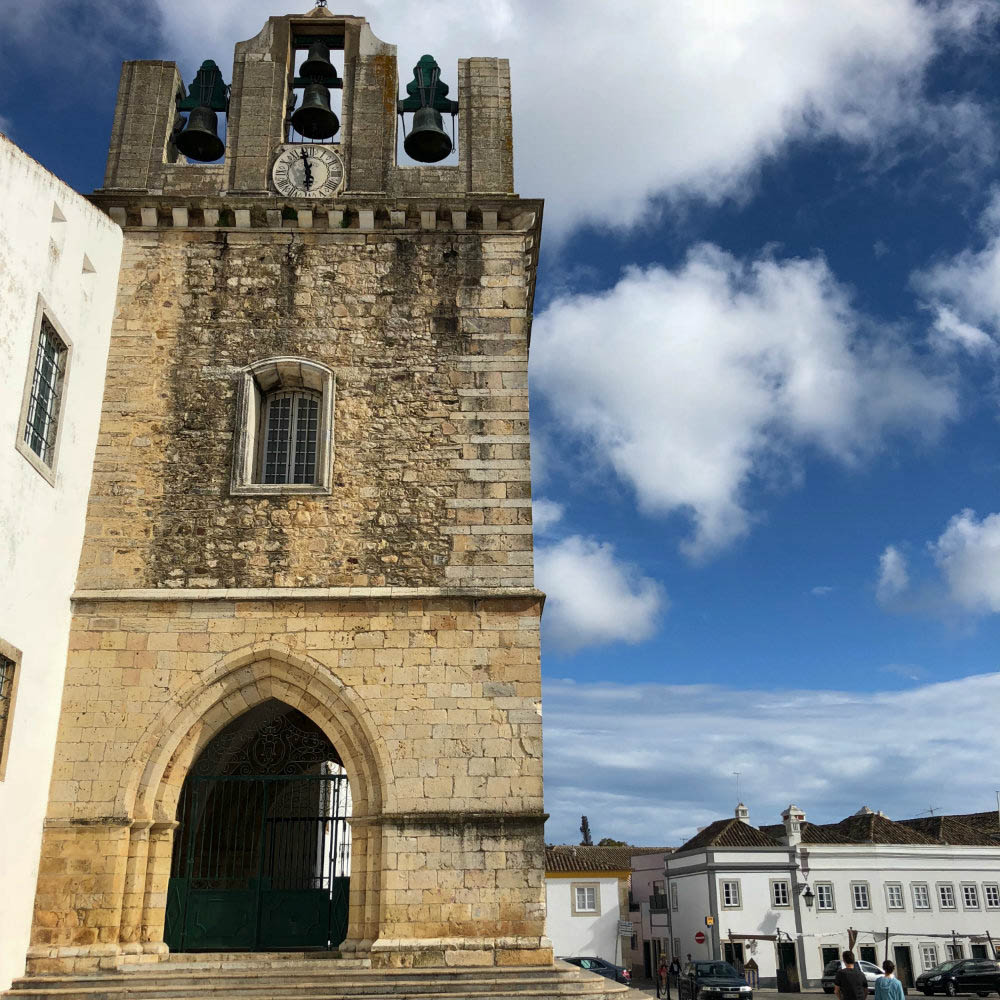 Sé Cathedral in the middle of Faro.

Are you ready to discover the most beautiful and interesting places in the Algarve? Have you visited one of the cities? What fascinated you? Write it in the comments – I look forward to your recommendations 😉