Where is that real Turkey, where they don’t call after you saying, “What do you want?”, but rather “I love you”? I found it. At the market in Muğla. Where the heck is Muğla, and why I should be at the market there, you ask. If you’re on holiday to the Turkish Aegean, you have to go to the market in Muğla on Thursday. I spent a great day there, all alone and off the beaten tourist track.

Where am I and where do I want to go?

I take part in organised tours, like the island tour on Mallorca, rather rarely, so would I be able to make it to the market in Muğla on public transportation myself? I almost get lost on the way to Muğla in Marmaris. From my hotel, the TUI BLUE Grand Azur, I take the dolmuş, a shared taxi, to Marmaris city centre and get disoriented when I arrive. This often happens to me without Google Maps. I look around desperately for someone to talk to who will take pity on me. A woman who can only speak Turkish takes me by the hand and puts me on the right bus to the bus station. So sweet. By the way, “bus station” is “otogar” in Turkish, which comes from the French “autogare”.

Not a junker: this is the bus that goes to the market

With the Mercedes to Muğla

At the bus station, you can’t miss the right dolmus. A big sign says “Muğla”. The ğ with the caron is a silent sign to lengthen the preceding vowel. Therefore, the place is pronounced “Muhla”. I get in and am surprised. A fancy Mercedes minibus with leather seats and air-conditioning. I had expected an old, rickety vehicle and am ashamed of my assumptions. The minibuses run every 60 minutes during the day from Marmaris to Muğla and take about 1 hour. It costs 12 lira per trip, so about €2.50. Tip: On the way out, sit on the left side – sit on the right on the way back. On the way, you have a great view of the bay. Now uphill into the hinterland.

View of the hinterland from the bus

Market in Muğla: So colourful

Having arrived in Muğla, I just follow the other people. And in fact, after a short walk, I reach the market of Muğla. A large part is covered. There are all kinds of stalls around it and I gradually recognise a system: edible goods are covered and everything else is out in the open. Completely untroubled, I take in everything, marvelling at fruits and vegetables that I’ve never seen before. The signs with the names in Turkish don’t help me out at all. It is so beautiful and colourful here. First I look at the vegetable market. Everything looks fresh and natural, like it came from your own garden. Farmers with headscarves and long skirts sitting next to their goods let me sample some and take pictures while they explain things to me which I don’t understand. We smile cordially at each other and I say goodbye with my two or three Turkish words. A portrait of the state’s founder, Atatürk, watches over everything.

Stand with fruits, vegetables, and a very relaxed seller

I discover only a few tourists – most of the market visitors are locals. Homemade pine honey, olive oil and vinegar in coke bottles, metres of dried chilies and aubergines, monstrous pomegranates, sacks of raisins and nuts… I don’t know where to look first. In the cheese section, I notice huge cylindrical cheese loaves wrapped in goatskin. The cheese is chalk white, and therefore probably goat cheese. I want to photograph the unusual sight, but the men don’t want me to. I may, however, still want to try it. I can only speculate that cheese in goatskin is probably forbidden for hygienic reasons. Oops, I didn’t see anything! 😉 If you’re into curious markets, then there might be something in Croatia for you.

There are dried vegetables hanging from the ceiling everywhere.

I actually always avoid fish markets because of the fishy smell. But the market in Muğla doesn’t smell. The fish is so fresh. The little fish are artfully draped, shimmering like a metallic work of art and lie well-chilled on ice. Men discuss and haggle, the women from the village are likely to exchange the latest gossip. So to say, an analog Facebook at the market in Muğla. Despite the hustle and bustle of people and goods, it’s a relaxed atmosphere. I am greeted warmly and asked to take pictures. Tips for haggling are available here..

Photos for an analog world

It is pleasantly warm on this October day in Muğla. The sun shines on a group of women and a man offering their goods outside the covered part of the market in Muğla. A basket of fruits that look like olives makes me curious. I try one of the unknown plants. It’s mealy and tastes unusual. At my request, the group agrees to be photographed. One of the women writes her address down for me, saying I should send her the photos. There is neither a postal code nor a house number. Will it ever arrive? I’ll try it. As a farewell, I get a few nuts pressed into my palm. The people at the market in Muğla are very sweet.

In the buying frenzy at the market in Muğla

The textile market lies ahead of me and here at the market in Muğla you can also find fake Louis Vuitton handbags and not-quite-genuine Adidas shirts. They’re not just made for the tourists! At a stand with handbags for 5 lira (1 euro), there is almost a tumult as women dig through to see what’s there. Women are the same all over the world! A seller calls after me: “Photo, photo, I love you!” Another salesman offers me a seat at his stand. He sells jogging trousers and huge men’s underwear. We talk with our hands and feet. As we say goodbye, I again hear “I love you”. Probably the only thing he could say in English. But still, I feel like a celebrity.

Proud of his product selection: a dealer at the market in Muğla

At the exit of the market, past the headscarves and lingerie, I see a mountain behind the city. What a great view of the market and Muğla there must be from up there! I have no idea how far away it is or how to get there. No matter. The mountain calls. At a place surrounded by cute traditional houses, it smells of fresh flatbread from a bakery. In a tea house, older men play rummy on a terrace framed by wild grapevines. They invite me for a cup of tea. It’s like something from a picture book. But I gotta get to the mountain. I follow my feelings through white alleys accompanied by the scent of grilled peppers and hearty lunches wafting out of the houses. In fact, I reach a path through a park that leads up to the mountain. After a while, there are just bare rocks. This is not a hiking trail. I climb on all fours as far as I can in a little dress and sneakers. Please, don’t try that!  If I slip, that’s the end of that climb. Although I don’t make it to the top, the view of Muğla is terrific. And still so beautiful.

Great view after a dangerous climb

I reach the foot of the mountain again, alive, and soon I’m back at the bustling market of Muğla. My stomach growls. A small eatery called “Doyuran Pide” on the edge of the market taunts me. Inside, a man is kneading dough and forming boats out of it, topping them before the pides disappear into the glowing wood stove. Show cooking at its finest. I order a cheese pide and ayran, a traditional yoghurt drink. I enjoy the hot, fresh pastry and watch the bustle in the market of Muğla through the windows. A woman wears a kind of costume and looks almost like a Frida Kahlo painting. The afternoon sun bathes the market in a warm, dreamy light. I pay and move on. My meal costs only 2 euros. Incredible. Nobody will starve here. At the edge of the market, one fast food place follows the next. In most of them there’s – surprise, surprise – doner kebab. 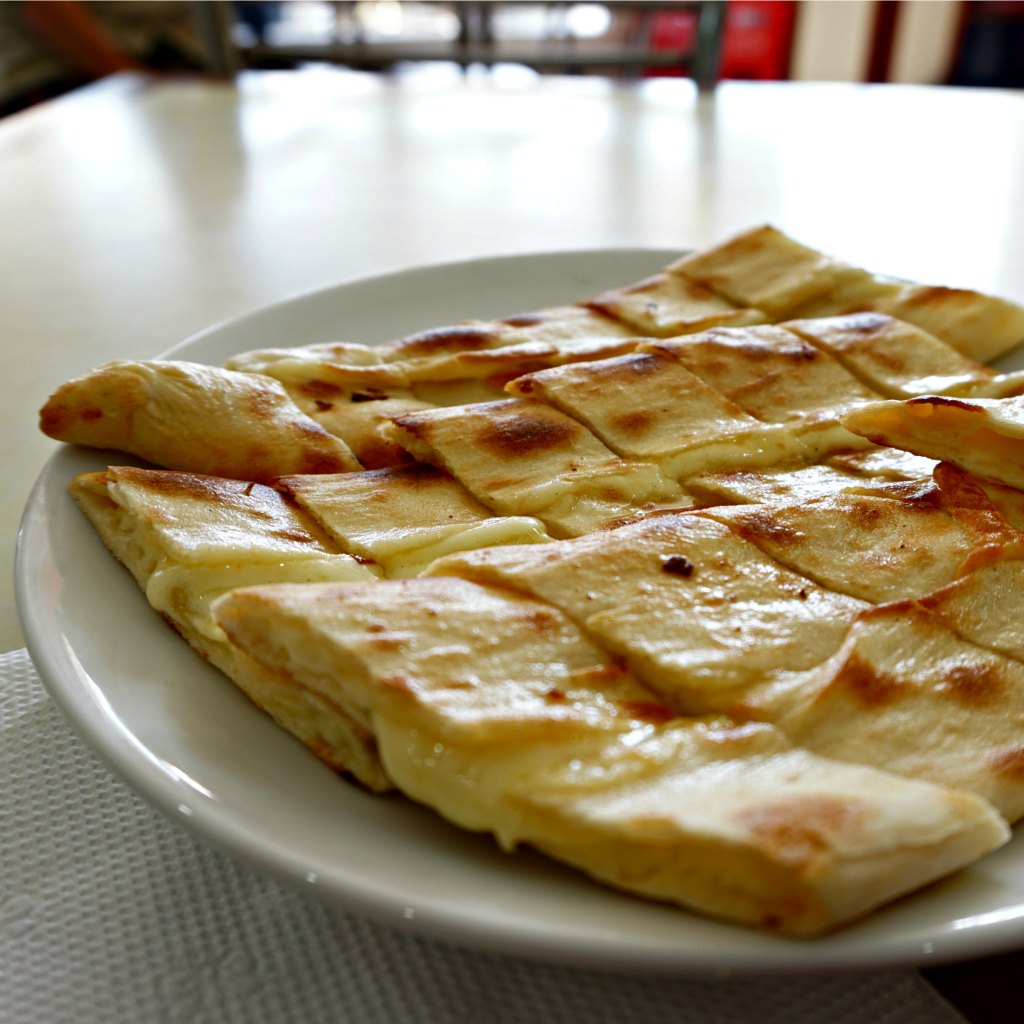 Pide always does it

The kind people of Muğla

One last time I walk around the Muğla market, past brightly coloured hair clips, tools, plastic tubs, lovingly crocheted baby clothes, and a dog admiring a case full of sausages. I buy a bag of nuts for the way back. I don’t have to wait long for the dolmuş back to Marmaris. On the drive back, I reflect on the day at the market in Muğla. The light-hearted and welcoming nature of the people left an impression on me. Completely without any tourist traps. Teşekkürler Muğla!

The market in Muğla takes place on Thursdays, mainly in the morning. The hotels in Marmaris offer organised tours, making the trip easy and inexpensive on your own. From the bus station in Marmaris, minibuses run regularly to Muğla. The journey takes 60 to 75 minutes and costs about 3 euros. If you’re looking for a great hotel in Marmaris, check out the TUI BLUE Grand Azur.