You know them too, those colourful flyers that you could scream at in hotels, at the airport, or in the tourist information office at your holiday destination. More often than not, they’re poorly designed and all offer the same activities: bus tour, boat trip, aaand the classic, the jeep safari. The brochures with the martial-looking off-road vehicles have always intrigued me, especially as a young boy – not only because of my childish love for everything that had four wheels and an engine, but also because I associated off-road driving with adventure. Since I was under 18 and had no valid driving license of my own, my longing for the adventure of a jeep safari remained unfulfilled – until now. 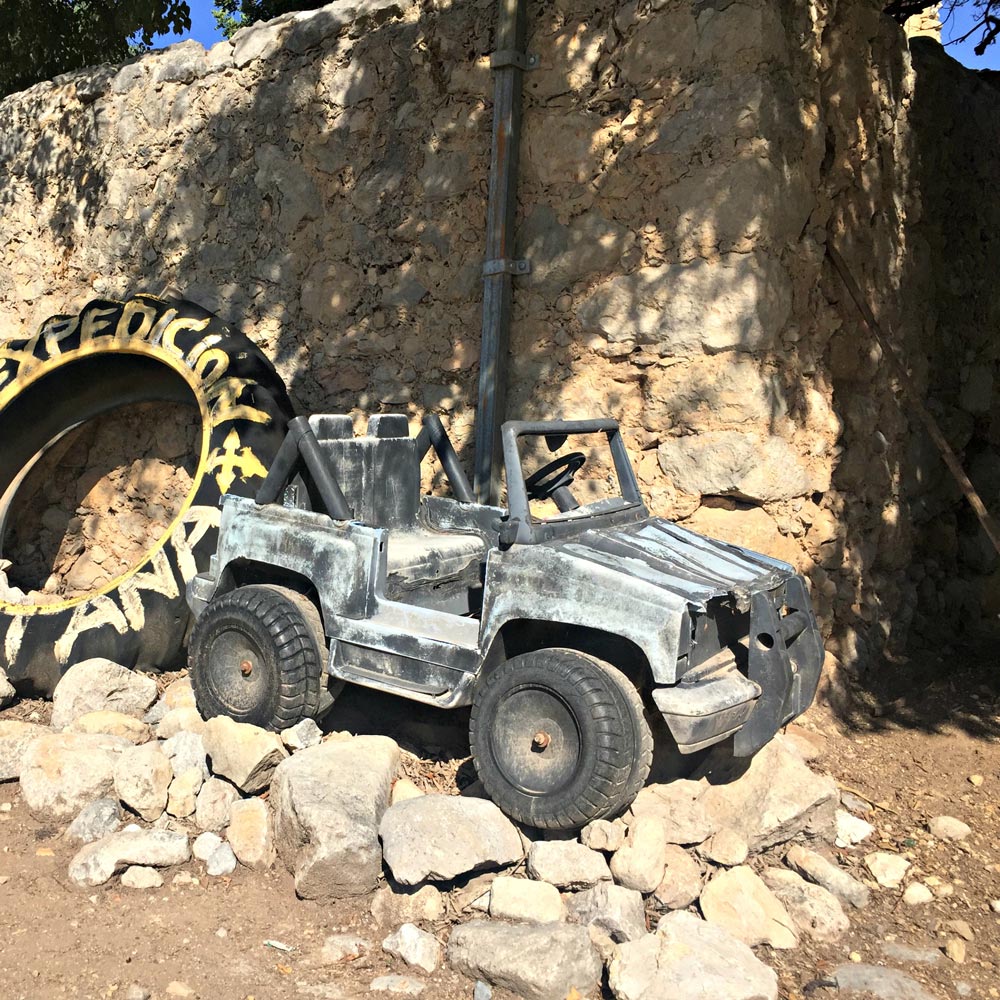 No one is leaving for the jeep safari in this vehicle

Jeep safari in the hinterland

Fast-forward to the present. Miri and I were on the favourite holiday island of the Germans, Mallorca. This is where the hotel TUI BLUE Rocador will be opening this coming spring. Located on the white sands of the beautiful bay of Cala Gran in the village of Cala d’Or, the hotel is the starting point for many trips on the eastern coast and the whole of Mallorca. Since there are an estimated 5,398 offers for enterprising tourists, we got some advice from our tour guide Sarah at TUI Destination Services. Since I’m not exactly seaworthy, we chose the “Great Island Tour” and – who would have thought – the jeep safari. Woohoo! A forgotten childhood dream comes true! While I was already picturing myself driving the all-wheel-drive vehicle off-road, Sarah told us where the trip would take us. The route ran through the largest private area of ​​Mallorca – in the north of the island – and crossed the Serra de Tramuntana. The mountain range is about 90 kilometres long and is home to the highest mountain in the Balearic Islands at 1,500 metres, the Puig Major. This all sounded good and was fueling my anticipation. 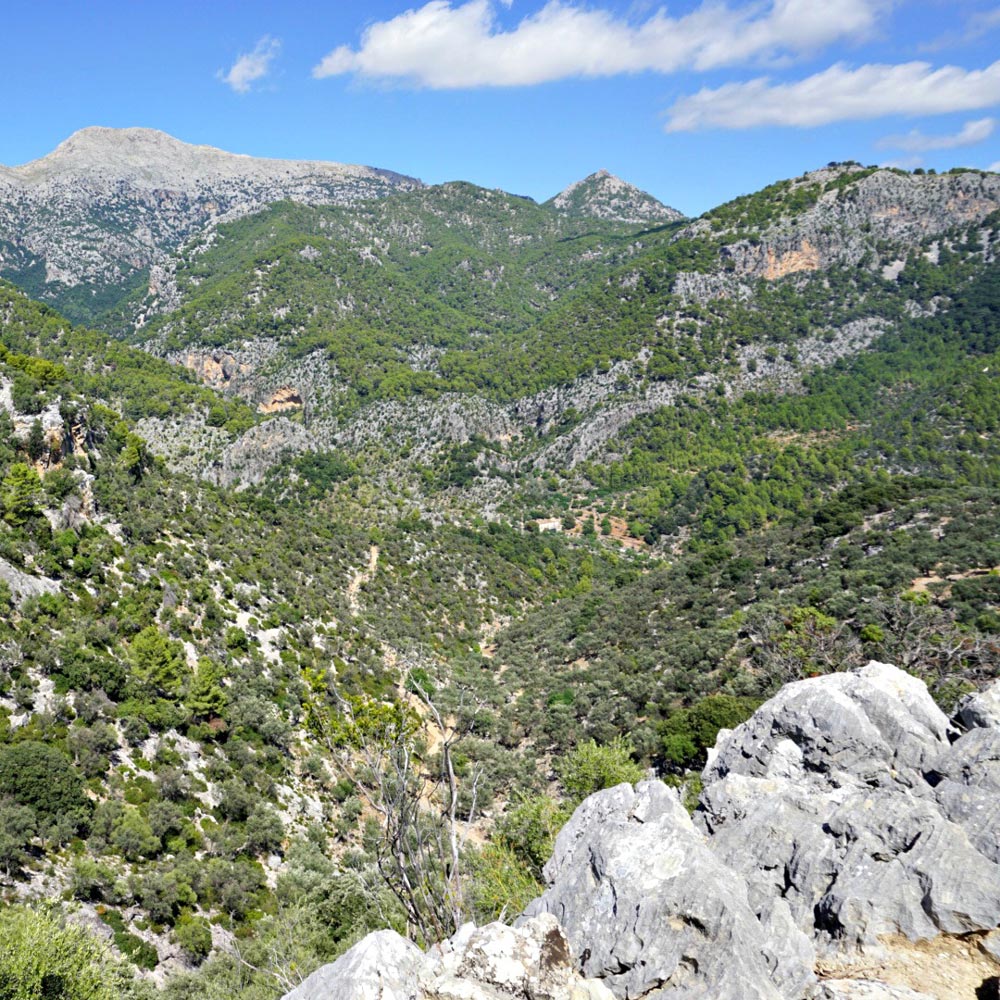 The next day began early. After a hearty breakfast at the TUI BLUE Rocador, Miri and I were picked up near the hotel by a bus, which took us to the Tramuntana Mountains. We were accompanied by about two dozen other adventurers who were also on their way to the jeep safari. After about an hour of driving, we arrived at a nondescript parking lot in the middle of nowhere. Right next to it, in the shadow of the Tramuntana Mountains, there was a small restaurant where Doris and Mathias were waiting for us. They told us that we were waiting for another bus before we could finally go. I was a little doubtful as I saw how many guests were joining us. Would there be enough cars for everyone? Would I be one of the lucky ones allowed to drive? Doris and Mathias gave a signal and, after a short walk, we arrived at a garage with parking space for the SUVs. The first surprise: our large group of Belgians, Dutch, French, and Germans was divided into three subgroups, each provided with a fellow countryman as a guide. Aside from me and Miri, we were now only about 20 people. My chance to steer one of the cars myself was rising! Doris explained – sitting casually on a car bonnet – some basic rules for the Jeep safari. Pregant women were not allowed to travel because of the vibrations, the Formula One racers among us were supposed to stay behind, and those in the back of the car had to hold on with both hands at all times. And – most importantly – there was a smaller shift lever that allowed the driver to switch between all-wheel drive and front-wheel drive. 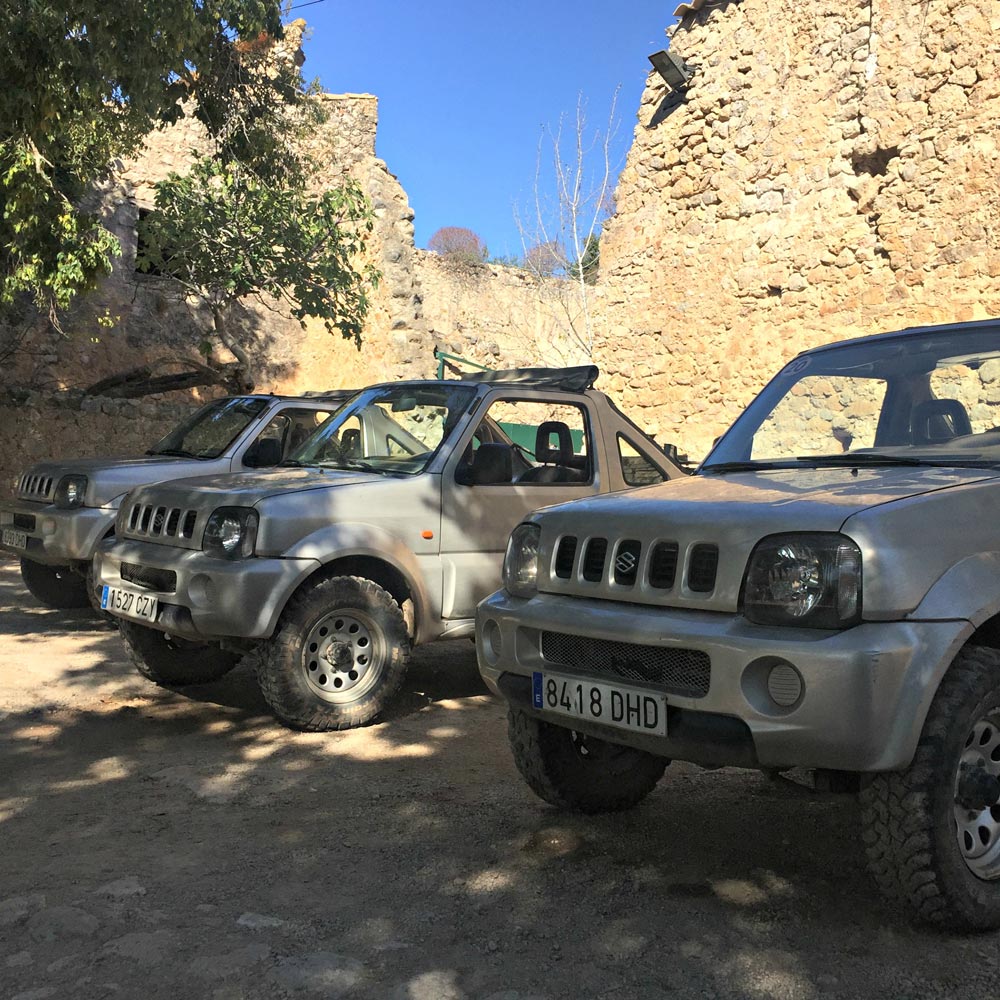 Ready to go – our Suzuki Jimmies

An SUV just for me

This feature wasn’t the only special feature of the surprisingly small Suzuki Jimmy. The agile Japanese car has a low gear ratio and a lot of pulling power, especially in the first two gears. Doris advised us not to go higher than second gear and to stay in first gear going uphill and downhill. Going downhill, we were also supposed to take our foot off the clutch so the engine brake could do its thing. She said that, as a rule, it was very difficult to stall the vehicles. The next question was the most important one of the day: Who would like to drive? Some hands – mine included – popped up. Doris counted seven. Less than I expected, but were there really seven off-road vehicles available? The guide split us into groups and – what luck – Miri and I got a Suzuki all to ourselves. Jackpot, the jeep safari could begin! 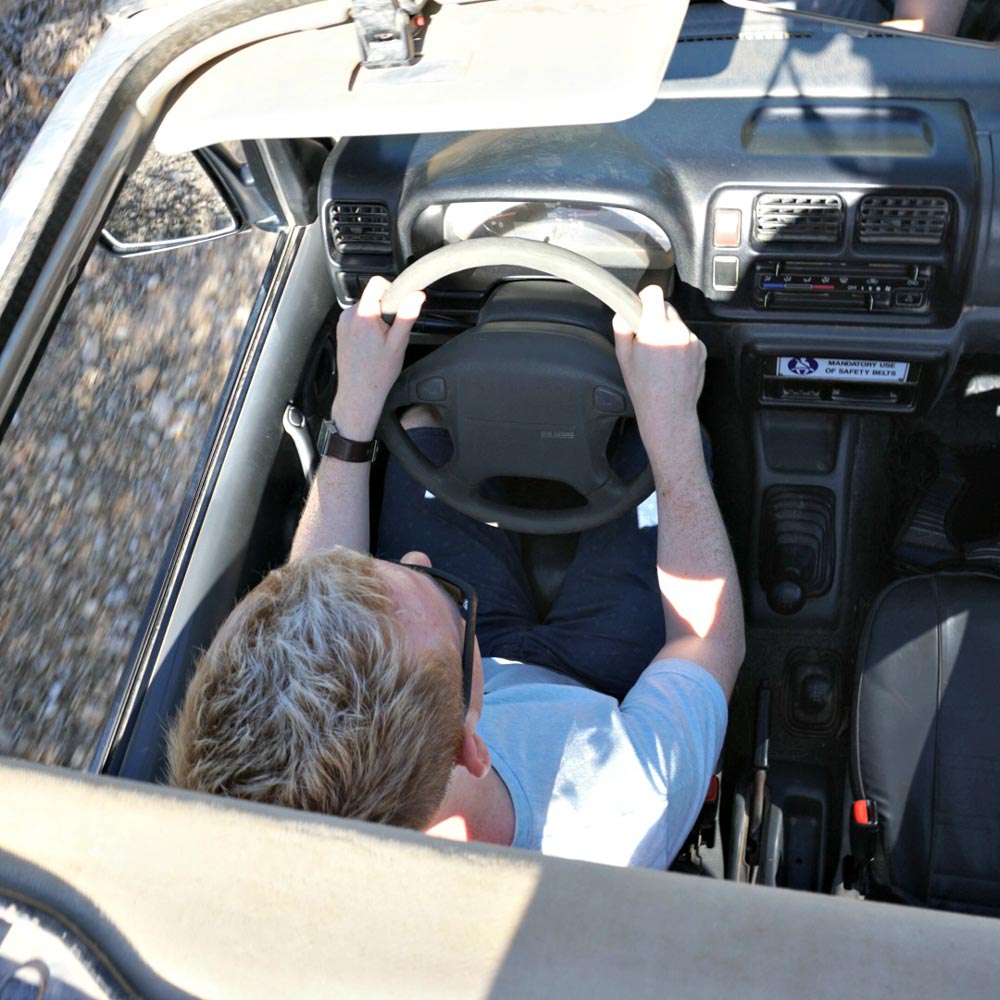 And off they go!

Jeep safari over sticks and stones

In a column of seven vehicles with Doris and Mathias in the front, we started rolling out. On a dirt road lined with potholes, we passed olive groves growing in red earth and approached our first hill. The little 4×4 vehicles bravely climbed up the gravel inclines and switchbacks, some of which had become overgrown with dense vegetation, and descended on the other side. Miri stood in the back of the vehicle like a Roman general in a chariot and let the wind blow through her hair while we were jostled back and forth. In the column, we passed a breathtaking gorge that shot left and right of the gravel road. The limestone rocks covered with trees and shrubs conjured a bizarre image that looked nothing like the well-known Mallorca. I felt like I had discovered a new world. No people, no civilisation – just me and the 4×4 machine. Just how I imagined a jeep safari! 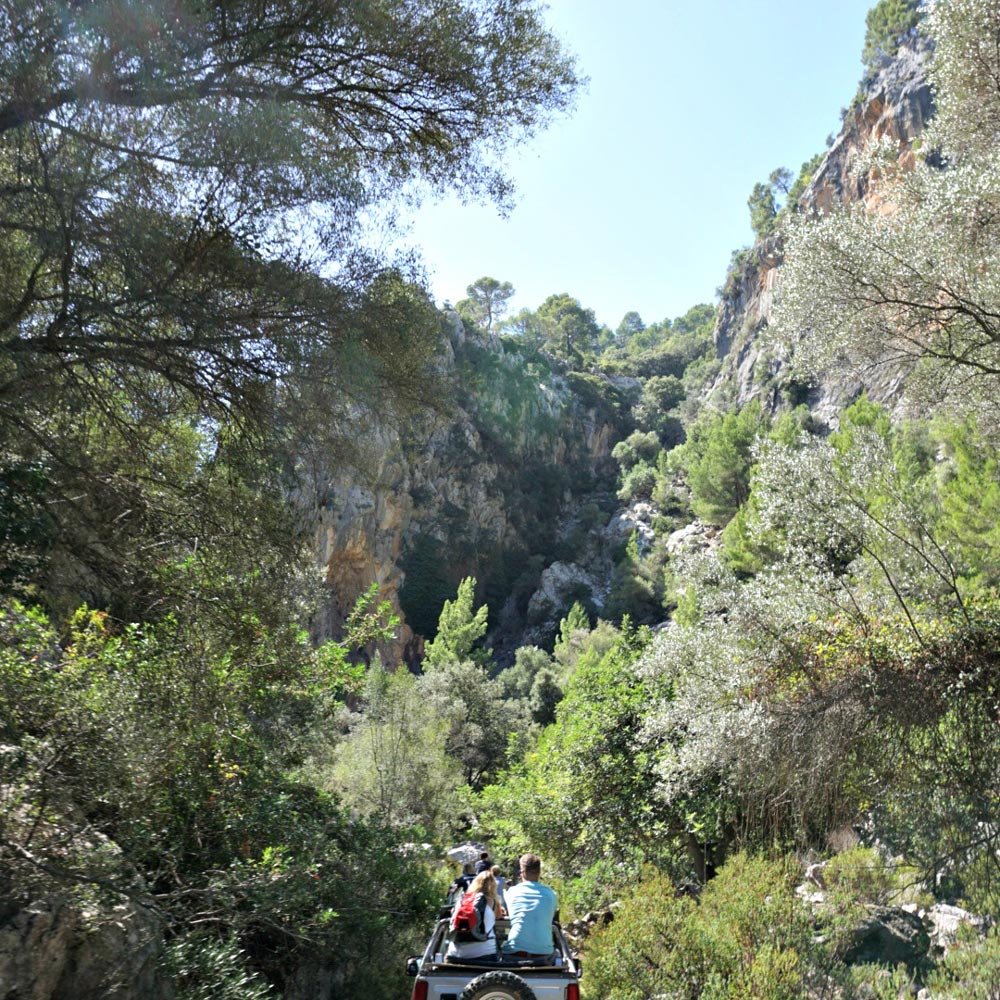 The wild vegetation closed over our caravan like a canopy and provided much-needed shade. Our of nowhere, a small, apparently abandoned economic building appeared in front of us. We were taking a left and were supposed to deal with a small rock at Mathias’ instruction. Well, small… It would have put a huge dent in the bumper of my own car. The vehicles in front of me managed the challenge pretty well, but I stalled the car twice. What seems to be the problem here? It finally worked on the third try. We parked the cars and Doris told us more about the terrain. 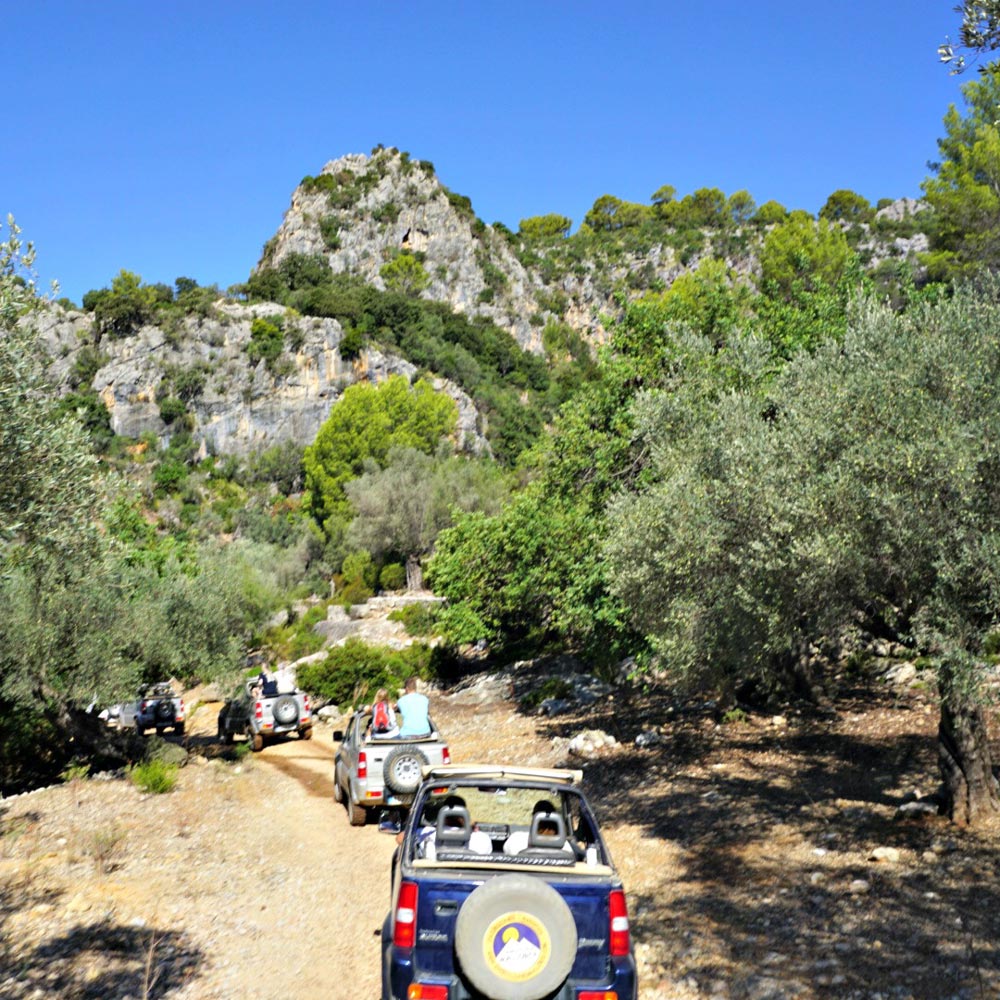 Gorge in the Tramuntana mountains 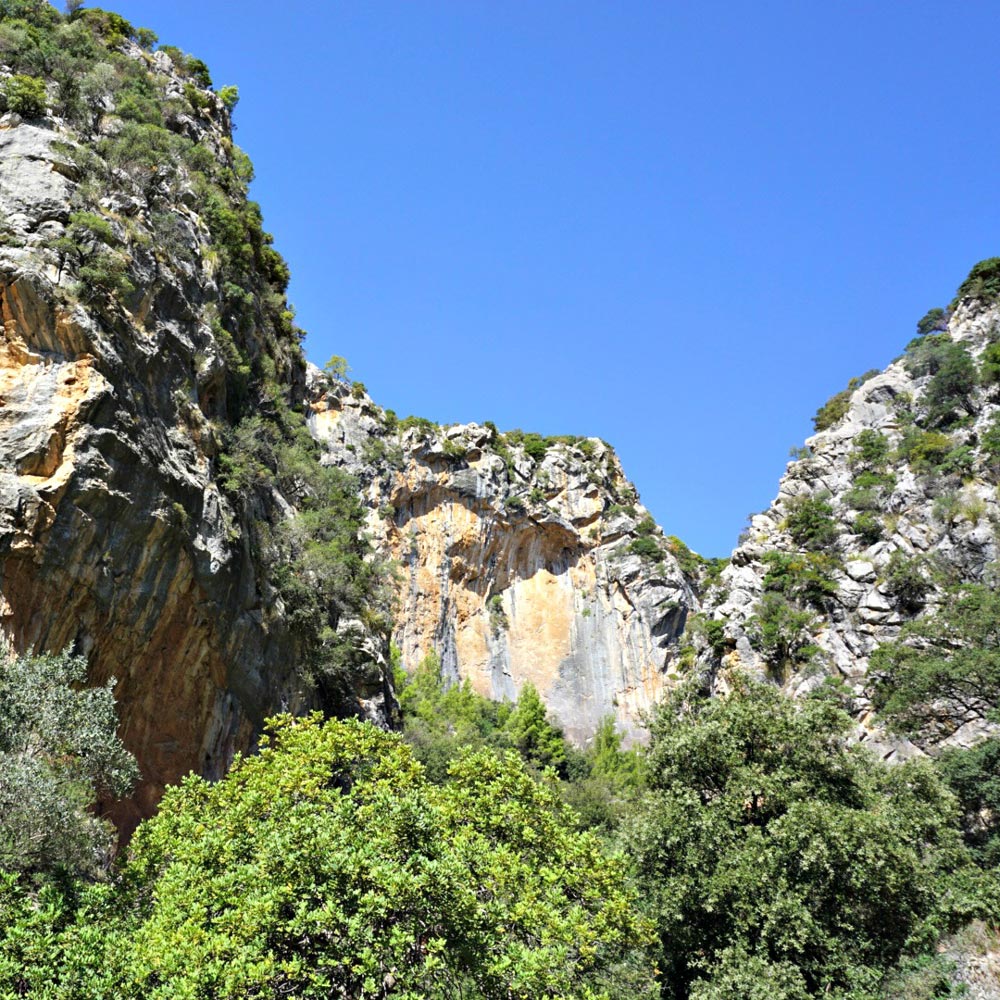 Plain to see: limestone and sandstone

The charcoal-maker had lived and worked in the building right behind us. He produced charcoal from the wood of the trees growing here – only arm-thick branches were cut and processed. Also scattered across the estate were the remains of old furnaces that were used for the production of lime. Doris informed us that we would be spending our lunch break in a now-abandoned olive mill. Previously, the rich olive trees of the estate were pressed into delicious oil with the help of a donkey. Enough history – we continued driving. Before we started our engines, the tour guide warned us that everything up to this point had been a warm-up, and that the real challenge was still waiting for us and our little SUVs. All right, I was ready! 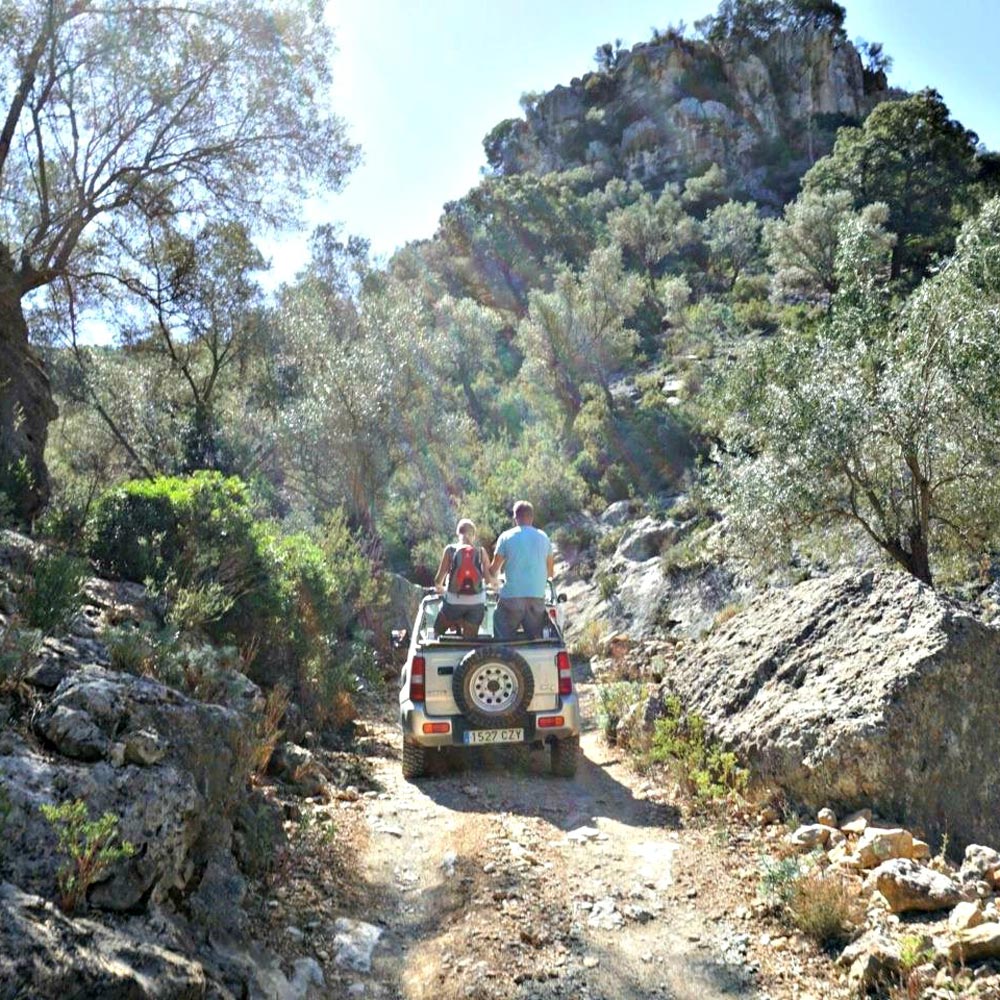 Off-road through the wild olive groves

We went back to a section of the route and angled left into an olive grove. The red soil was wet and there were puddles here and there. Of course, I didn’t miss any of them – the next car wash was going to be well-deserved. Next began the climb to over 500 metres. Gravel gave way to rubble and the incline was increasing. So much so, in fact, that I stalled the car again. What’s going on? Mathias, the guide, was wondering the same thing, and he threw a suspicious glance into my cockpit to find that I had been driving in front-wheel drive the whole time. Impressed that I had managed to get that far and at the same time worried about the condition of the small off-road vehicle, he explained to me how to switch to four-wheel drive with the second shift lever. Evidently, I had accidentally pulled it and – despite Doris’ advice – disabled the 4×4 mode. Behold, the impregnable rock was now suddenly a breeze. 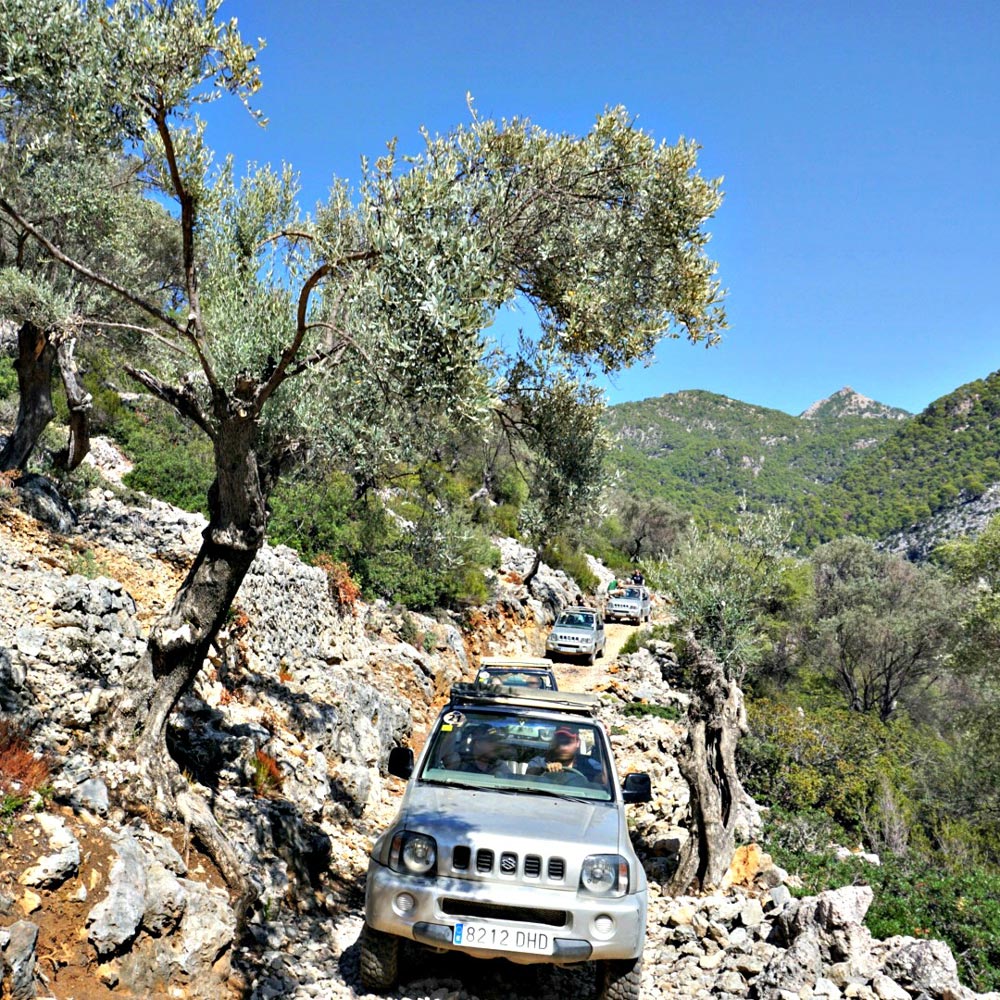 The arduous ascent on gravel 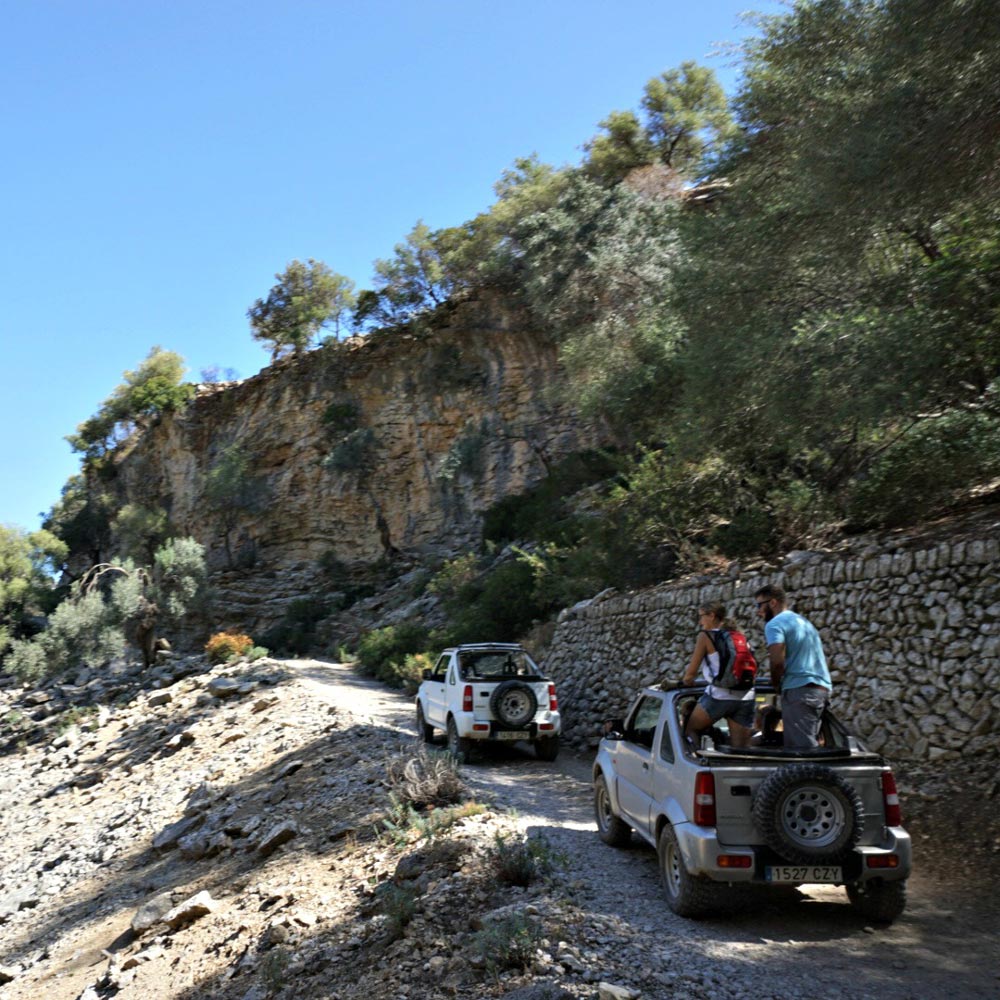 On the right and left of the off-road vehicle, the mountain now descended steeply. Crash barriers? Nope! Occasionally, all the cars would stop so Mathias could give us directions to go through the most difficult passages and tightest corners. We reached the preliminary destination of our trip, a viewpoint with magnificent views over the east of Majorca and the sea. Below us, we could see the paths we had taken to get here. It’s incredible what those four-wheel-drive vehicles are capable of. 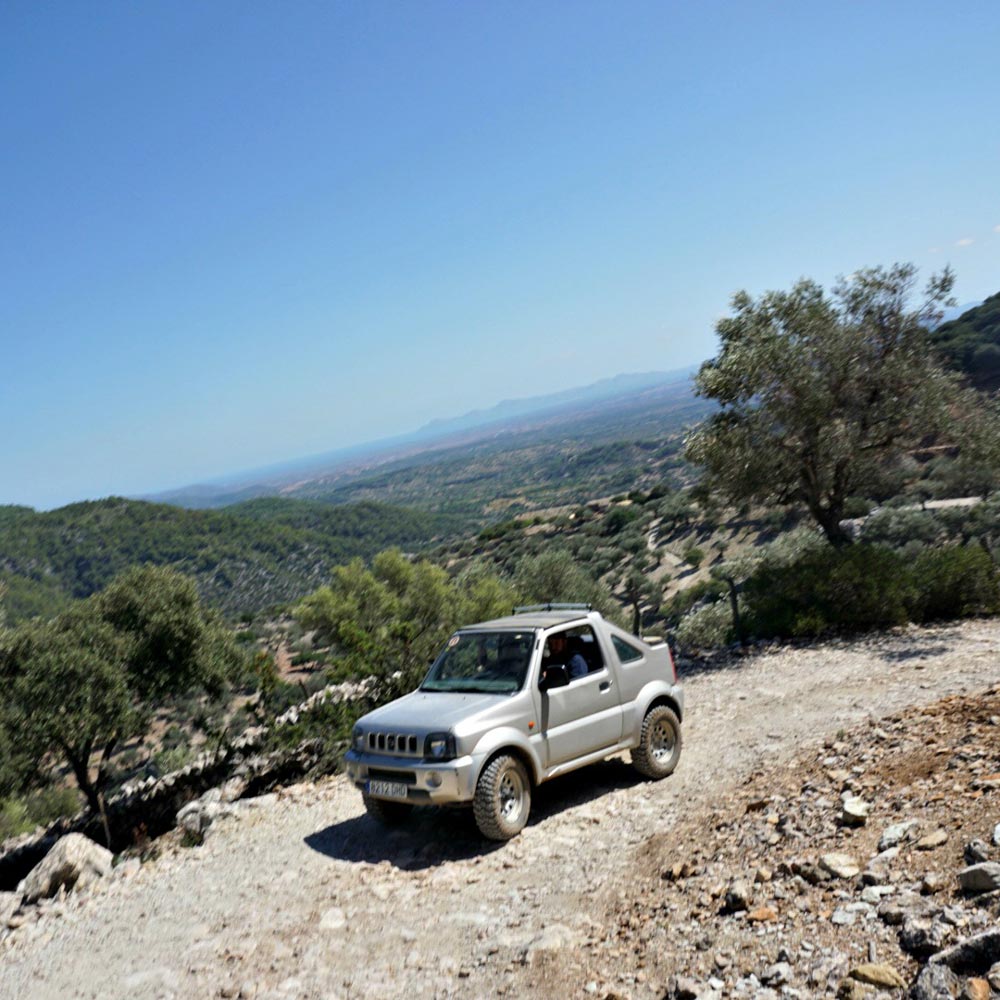 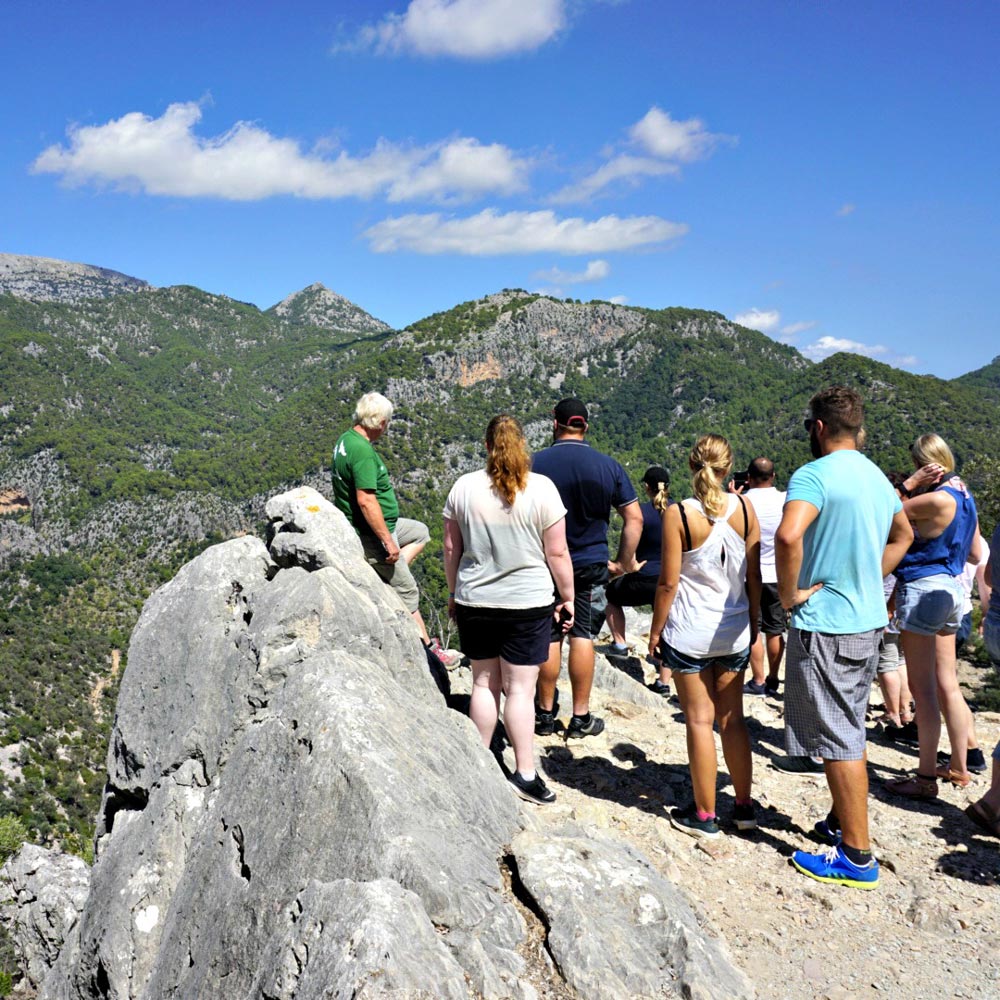 The descent began with the promised rest stop at the old olive mill and a well-deserved lunch. With authentic Mallorcan goulash and homemade farm bread, we took in the views of the valley. Those who wanted to could cool off in a spacious pool. Had I known that, I would have packed a swimsuit for the jeep safari! Instead, we took a look at the inside of the olive mill. It still looked like processing could begin again at any time. Only the absent beasts of burden necessary to power the thing stood between us and a bottle of freshly pressed olive oil. 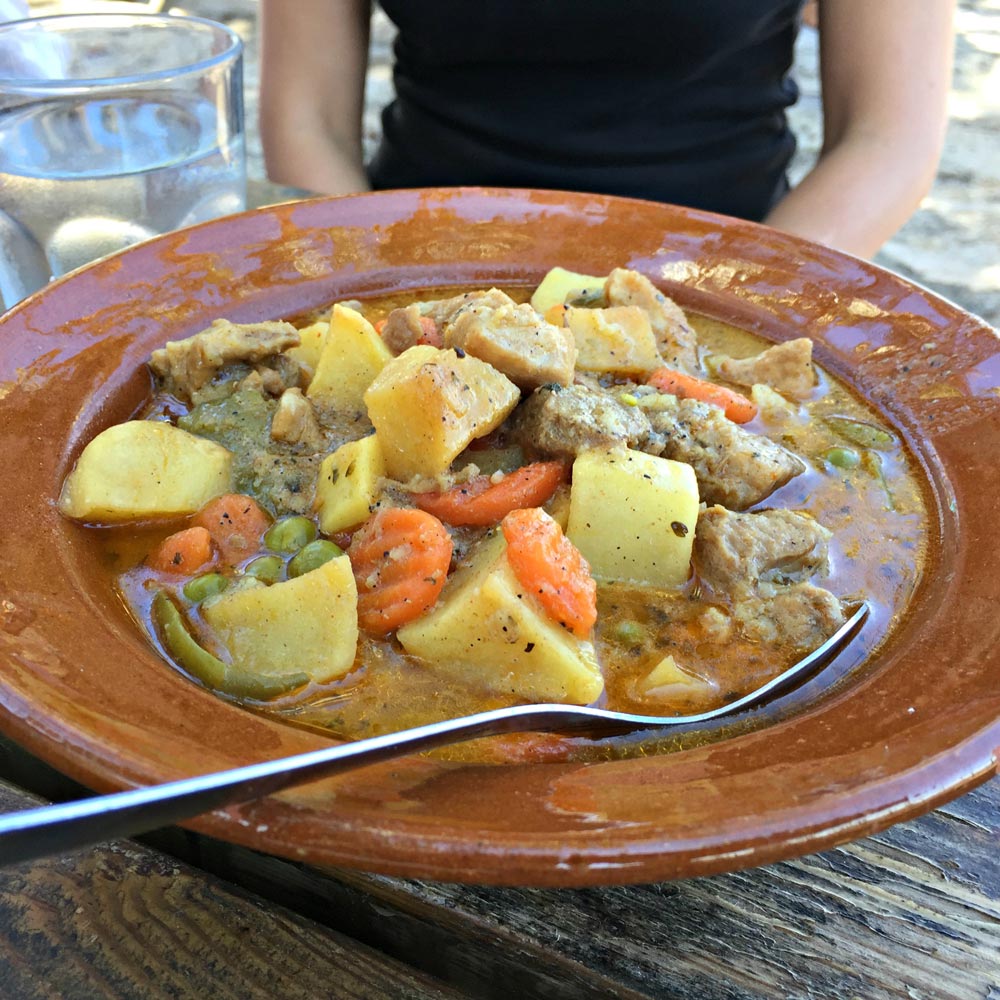 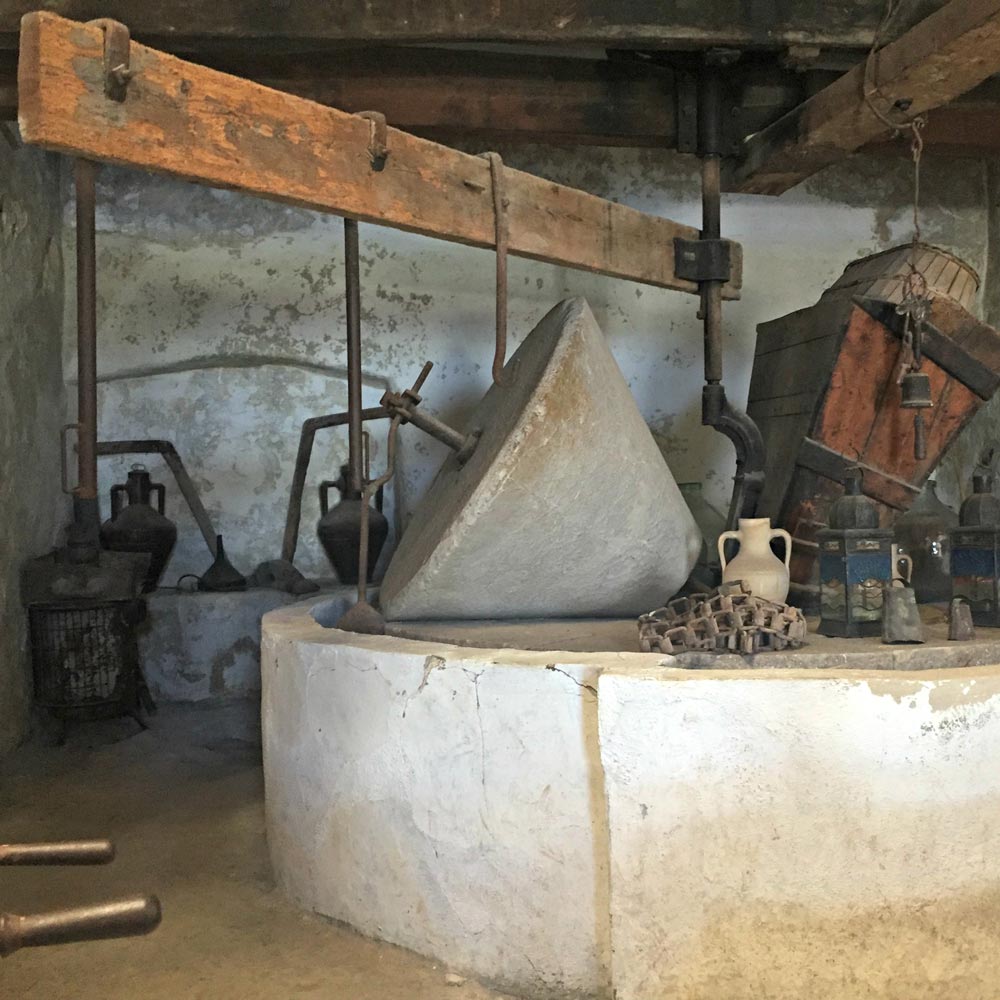 Instead of dedicating ourselves to the production of olive oil, we were collected by our guides to continue our descent together. After about 20 minutes without any notable obstacles, we once again arrived at the starting point of our journey. Apart from minor interruptions and the lunch break, I sat at the wheel for about three hours during the jeep safari and was now quite exhausted. The group said goodbye to the guides and the off-road vehicles with a round of applause. 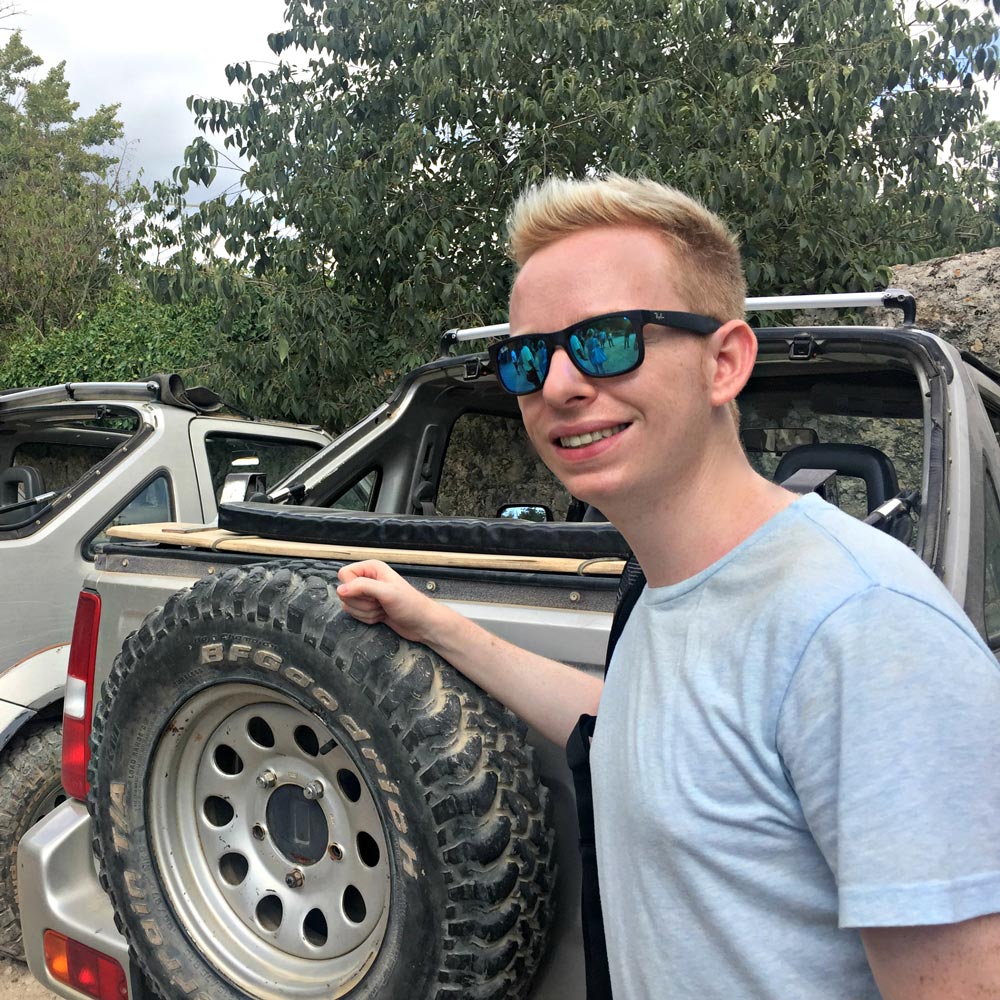 With a satisfied smile on my face and a lot of gasoline in my blood, I stepped onto the bus, which took us back to our hotel on the east coast of Mallorca. Aside from my descent in the mountaincart and my tandem flight with the paraglider, the jeep safari was probably the best adventure with TUI BLUE. Sometimes childhood dreams come true, even if it takes many years.