Llama Trekking in Styria: Llama without the Drama

03 Aug Llama Trekking in Styria: Llama without the Drama

Are you interested in llamas and mountains, but find that South America is too far? You can almost get the feeling of being in the Andes at Klausnerhof in Styria, which offers llama trekking. No matter how bad your mood may be going in, after a visit to the llamas and alpacas, you’ll want to hug the whole world. Why? Read on. 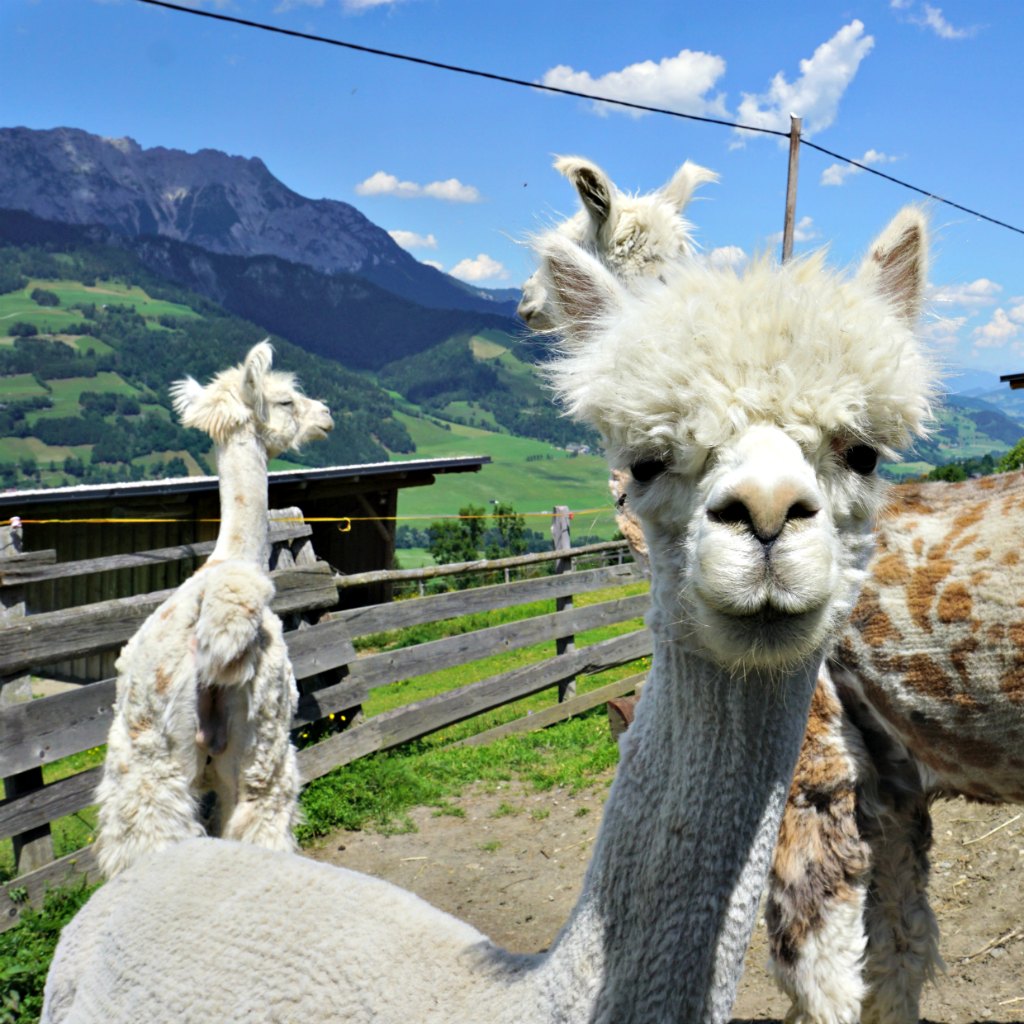 How do you come upon llama trekking in Styria? Our accommodation in Schladming, the TUI BLUE Schladming, recommended llama trekking as an activity. Llamas and the Alps? That fits. So we – a small group of young people – make our way to the Klausnerhof, 15 kilometres away and at an altitude of 1,050 metres. Of course, you could also do it with the e-mountain bike, but we take the car. On the trip, the speculations start: Will a llama spit on us? Can you ride one? Is llama trekking not just for kids and retirees? 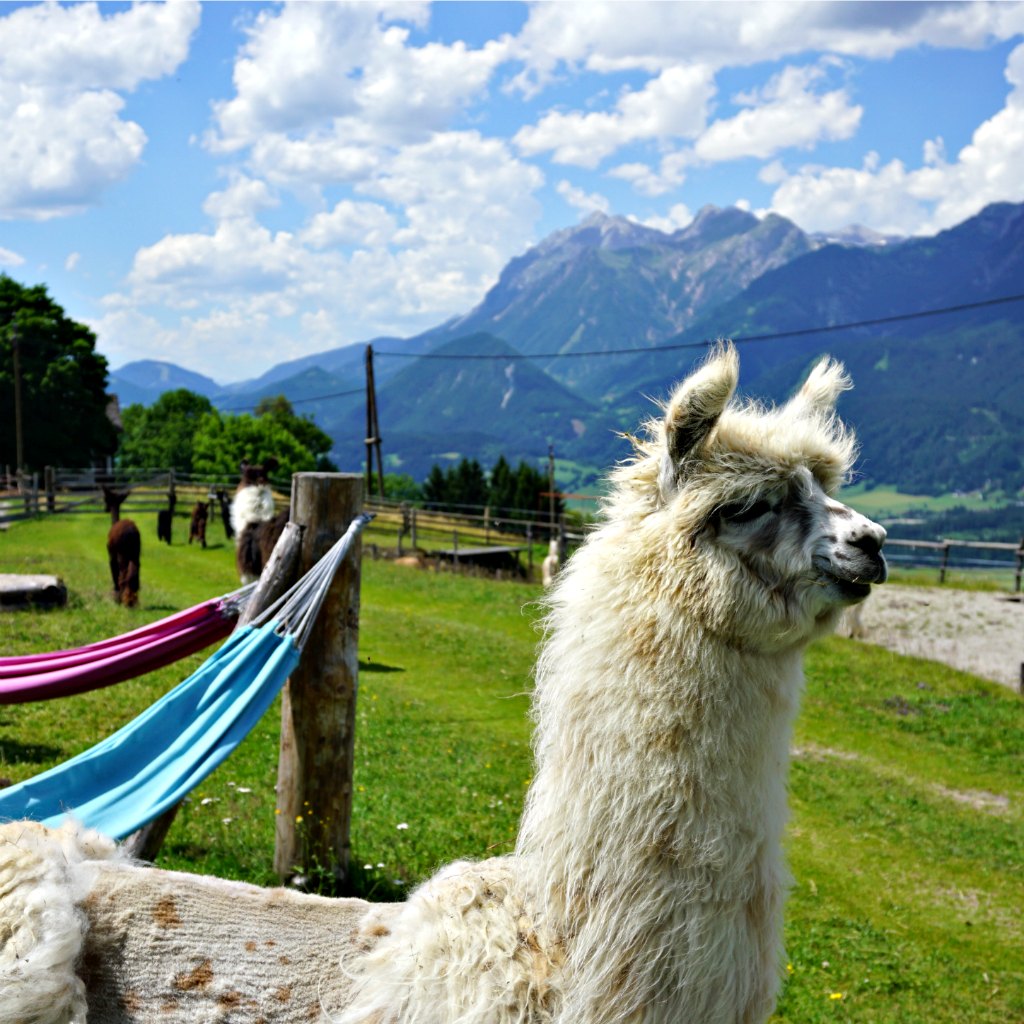 For visitors and guests there are possibilities to relax in the surroundings of the Lamas.

Llama without the drama

We’re welcomed at Klausnerhof by Katrin, who has kept llamas and alpacas with her husband for 9 years. The farm not only offers llama trekking, but it’s also a therapy farm. Llamas are particularly well suited to animal-assisted therapy because they have such a calm demeanor. In pens with plenty of room to run about, we find many llamas and alpacas, both big and small. Even the coolest among us can barely contain themselves: “Look at the sweet baby llama!” “Oh they look so cuddly – I just want to pet them!” Before we lapse into hysteria, Katrin tells us that llamas and alpacas don’t like to be touched on the head, but stroking on the back is perfectly fine. We don’t need to be afraid of spitting llamas, because they only spit on each other in territorial and class struggles. 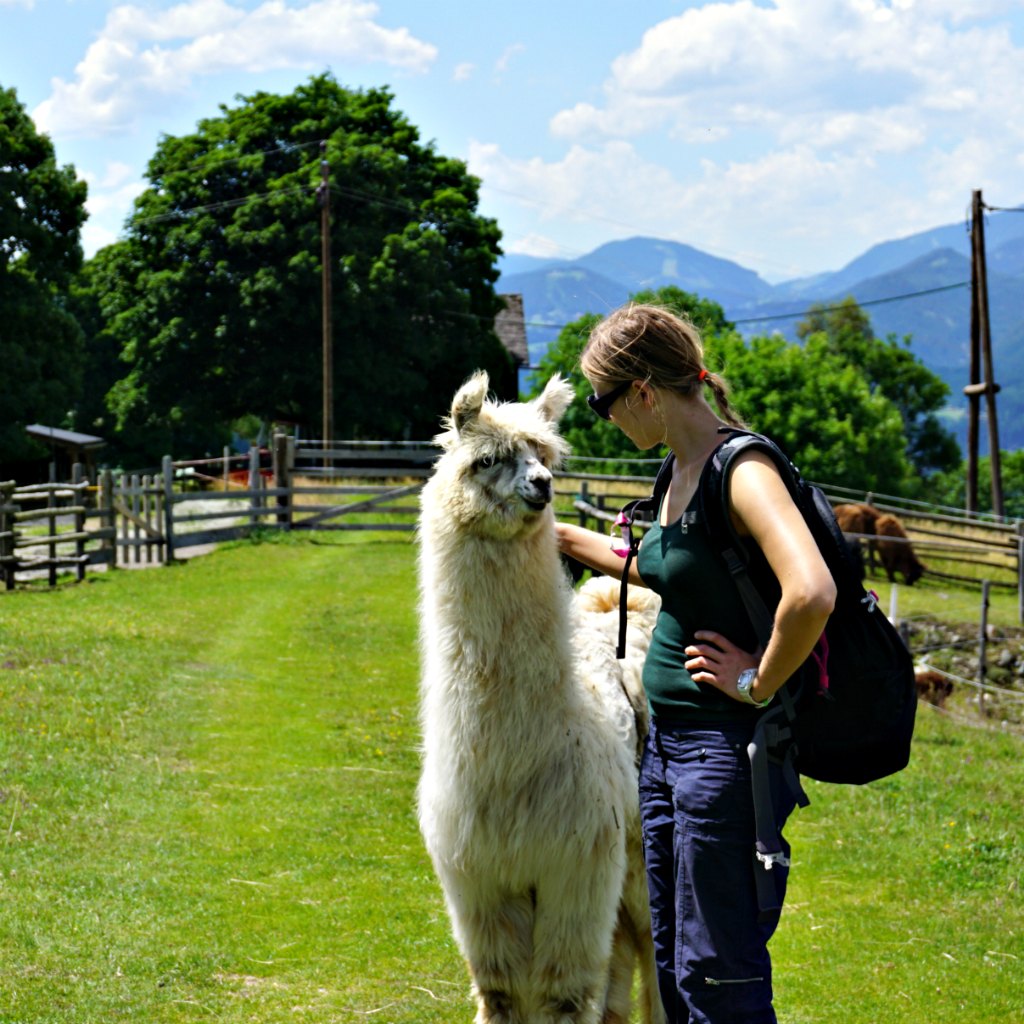 We are getting closer…

At first glance, llamas and alpacas look alike. Same same, but different. Kathrin tells us that llamas are larger and have “banana ears”, while alpacas have pointed ears. Looks somewhat like a weird camel (indeed, it is a type of camel). The wool of alpacas is finer than llama wool, but both are hypoallergenic. The alpaca is completely shorn, llamas only on the belly. Socks, plush animals, soap, and much more are made by Katrin and other local women from the wool or fleece. We are fascinated by the soft coat and just want to cuddle. 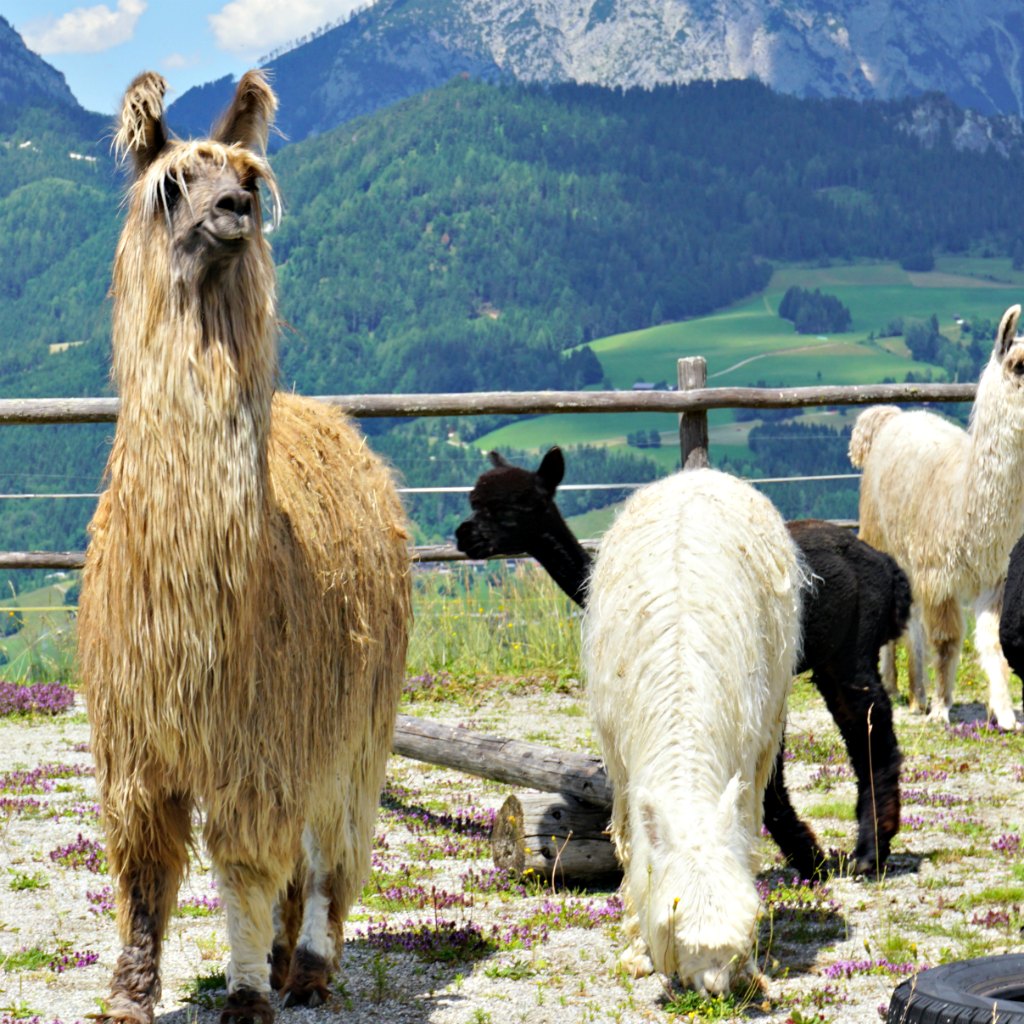 The cute llamas and alpacas with the soft, googly eyes are trusting and can be patiently stroked and photographed. Although the herd is large, each animal has its own name, making it easier to call them by name by the end of the llama trek. Celina, Bertl, Maestro, Rosalie, Estrella, and other flowery names have been given to the Andean animals. With a panoramic view of the mountain landscape, all that’s missing is a poncho and a panflute and you might think that you’re in Peru. Wispy, shaven, monochrome, spotted, smirking, with a wind-blown hairstyle, with dreadlocks… every llama and alpaca is unique and hugged extensively by us. Our inner children do somersaults and beam like the sun. It’s almost like therapy. But didn’t we come for the llama trekking? 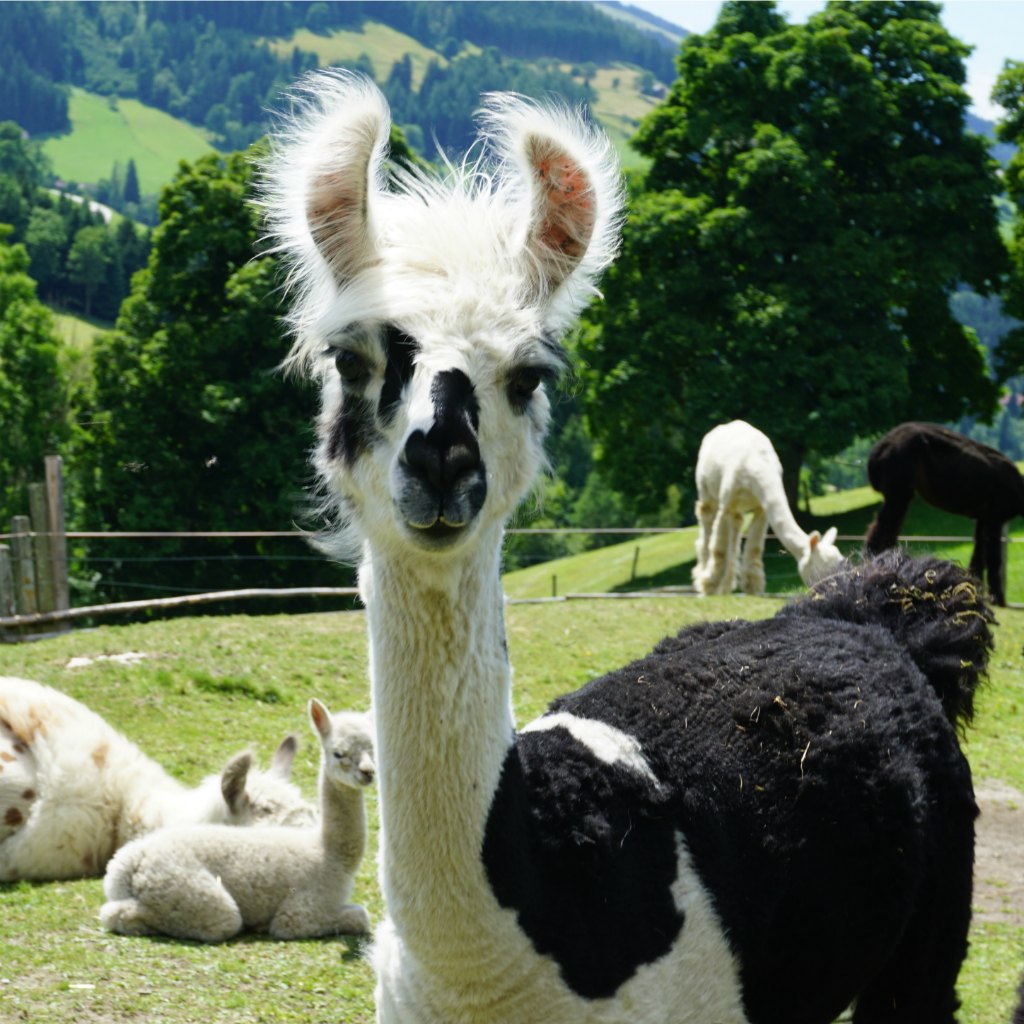 The llama known as “Bella” is a particularly beautiful specimen. 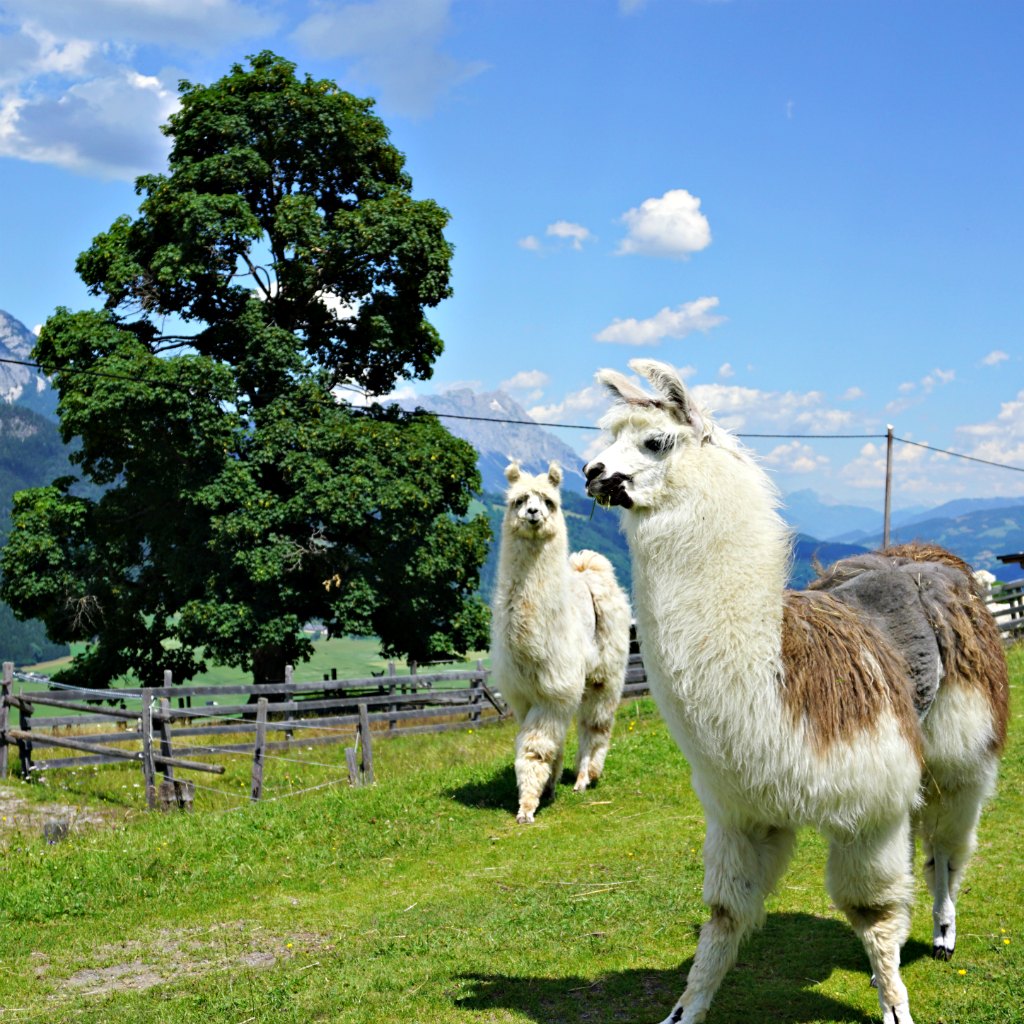 The llamas can move almost freely in front of the Alps. 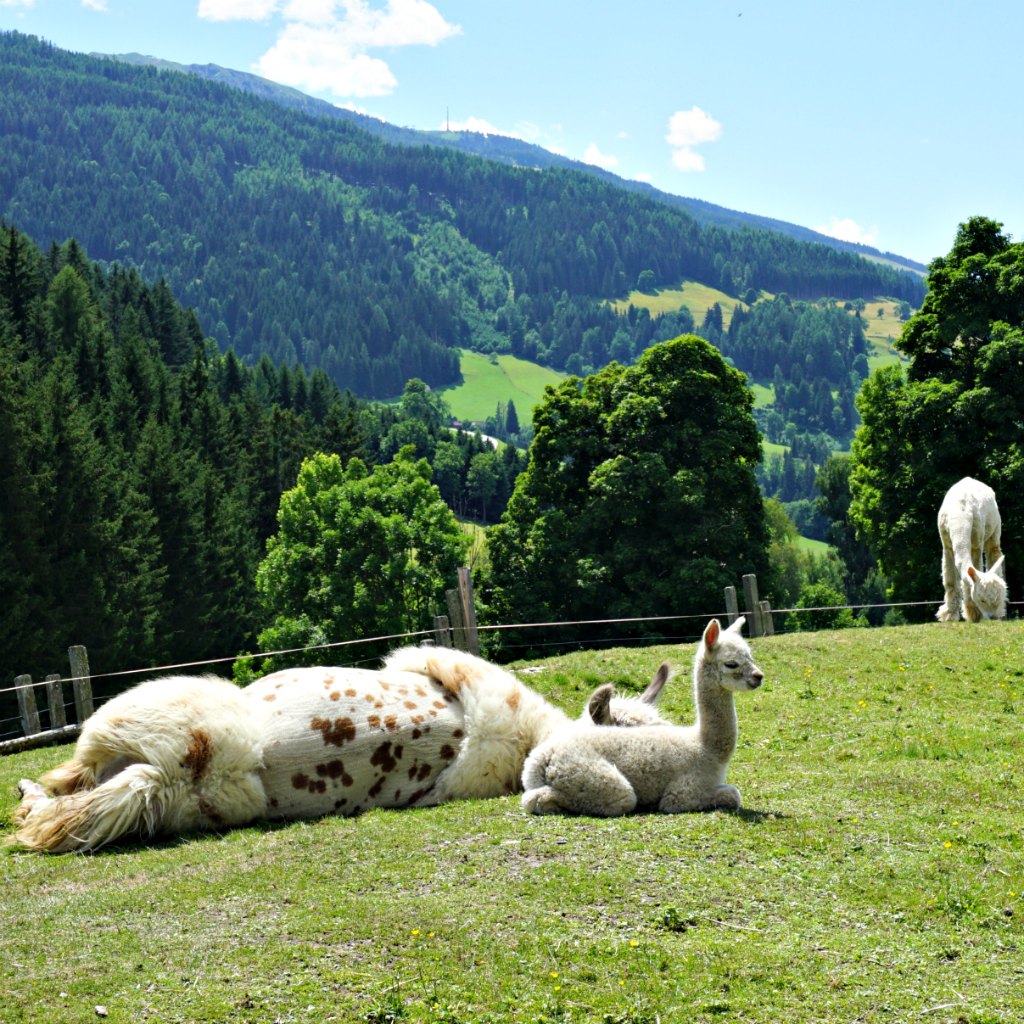 Even among the llamas, the young attract the most attention.

While we feed a few animals with hay and take funny selfies, a few of the shaggy creatures are prepared for llama trekking. Males should be led from a distance of 2 metres, Katrin from Klausnerhof cautions us. Otherwise, it could cause friction. I get a male llama with the innocuous name of Jacky. Each of us gets a llama on a leash. Important: Lead the llama and don’t let it eat. They’ve already eaten. The llamas actually lead and not the other way around! We’ll only take a short walk due to time constraints, but Klausnerhof also offers full-day llama trekking.

Jacky and I examine each other skeptically.

We go in intervals and probably make for a very funny picture. People who handle a llama. Or get handled by a llama. I move forward with Jacky. The male llama sets off and wants to move in a different direction than I do, or eat. With some coaxing, he can be persuaded – the others get on with their llamas magnificently. Bright, smiling faces. Llamas are frugal pack animals, but you shouldn’t ride them. It just wouldn’t be humane, because their frames aren’t built for it. The llamas can carry loads that are balanced on their sides very well. The smaller and more delicate alpacas aren’t suitable as pack animals. We only had our emotional burdens from everyday life, which the llamas and alpacas removed with their cheerful nature. After the short llama trek, we say goodbye to Katrin and the beloved animals and are deeply relaxed for the rest of the day. 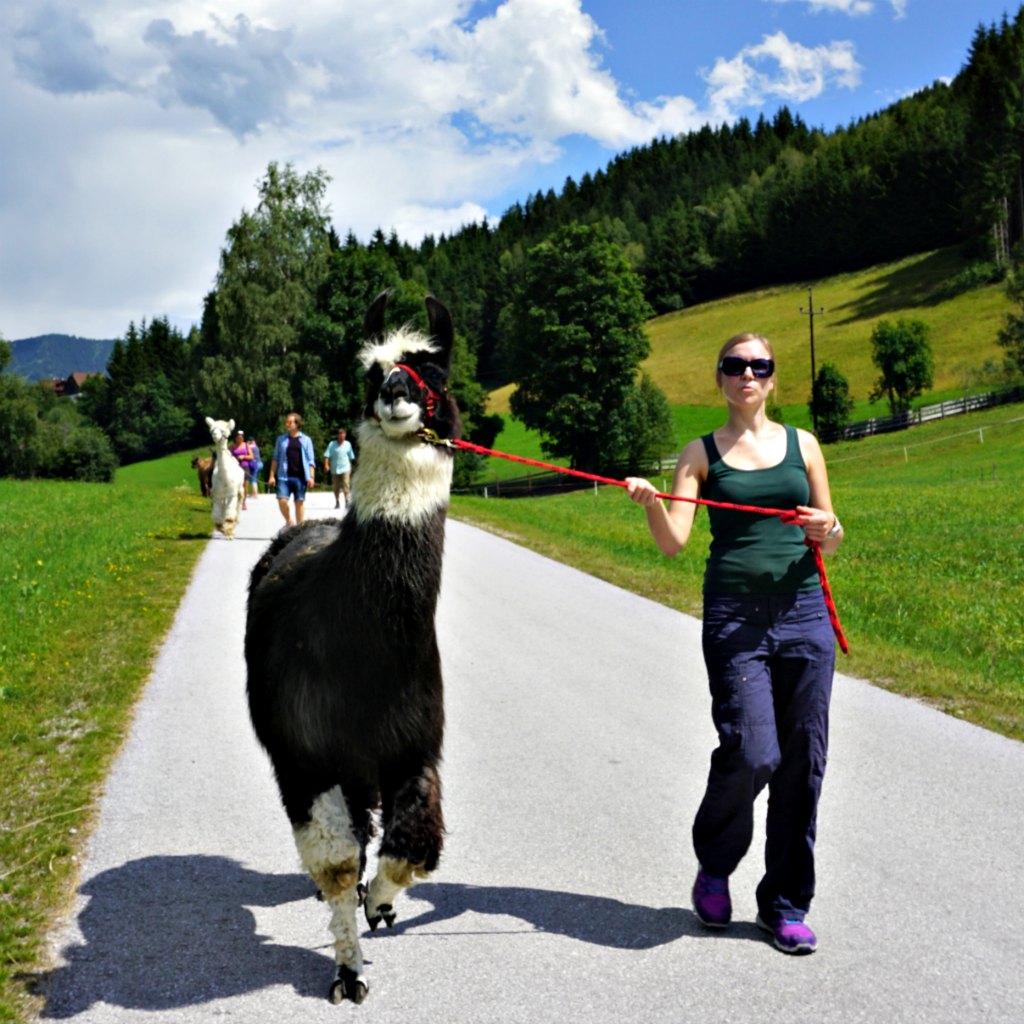 Are we even going in the same direction? 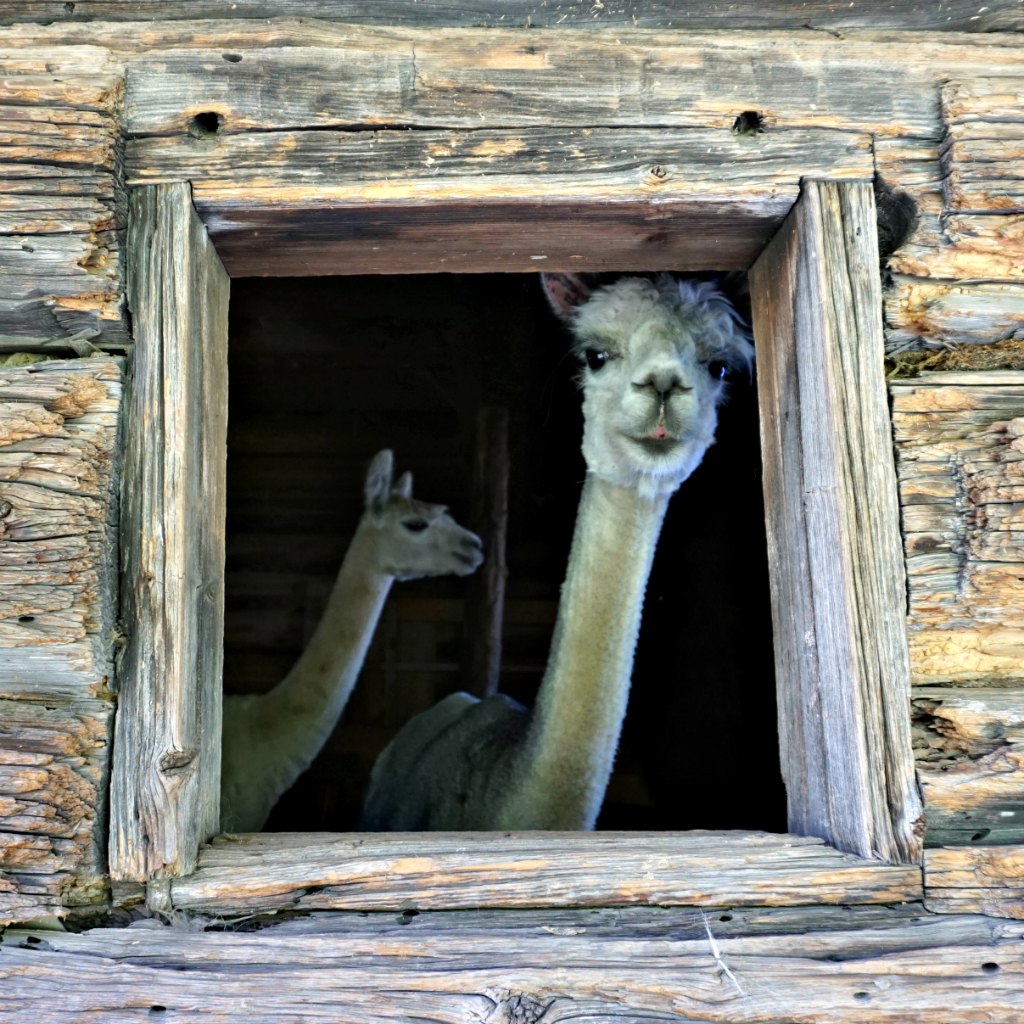 Cuckoo, who am I? The Lama!