Do you already know about the absolute insider tip on Turkey’s southern coast? We’re talking about the city of Alanya in the popular holiday region on the Turkish Riviera, not far from the hotelTUI BLUE Palm Garden.
In addition to fantastic beaches, the city can look back on an historic past, which can still be traced through a variety of historical and ancient sights.

I spent a day in Alanya and collected exciting insights from the spectacular pirate fortress overlooking both the city and the Riviera. One of the best parts for me was a traditional Turkish lunch right on the Dim River, and a visit to the mystical stalactite cave. Learn more about my impressions of Alanya in the blog post. Have fun reading. 😉 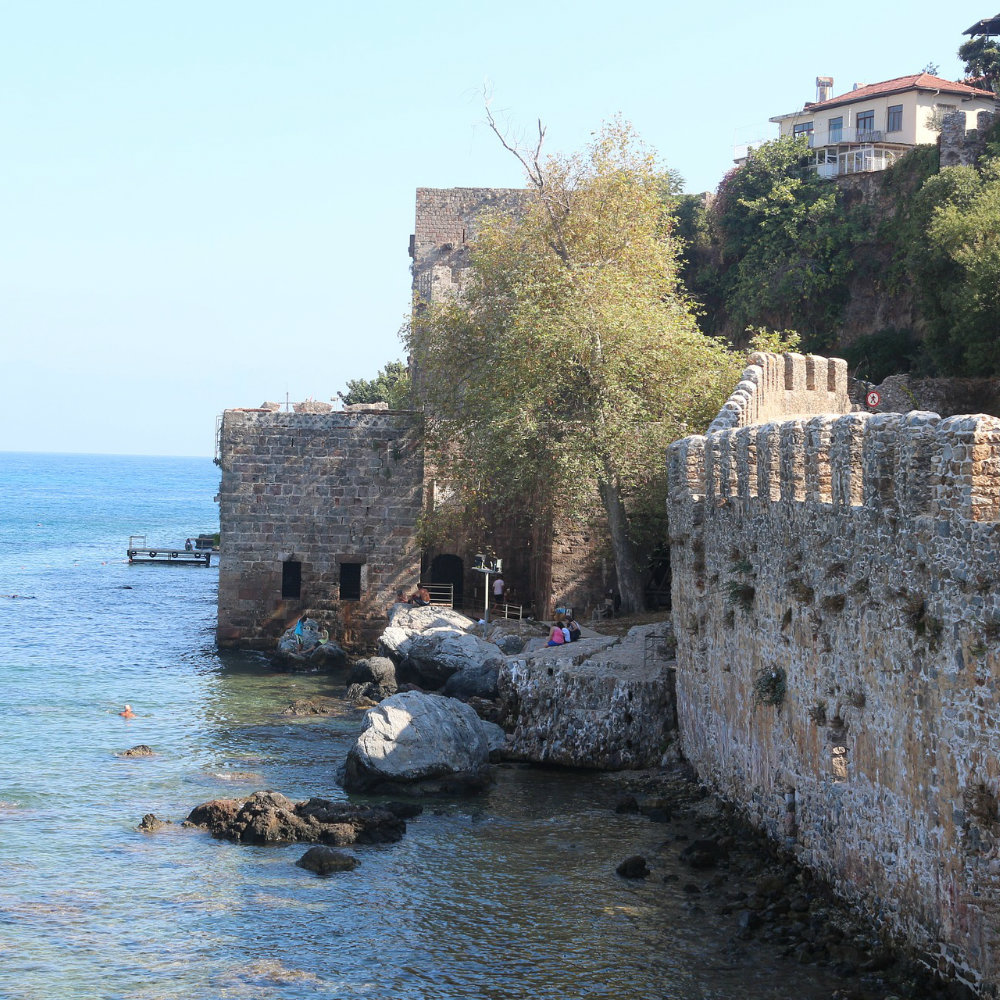 The fortress wall of Alanya.

My trip to the Turkish city of Alanya

The excursion to Alanya is offered as a full day excursion at the TUI BLUE Palm Garden. The best way to find out is simply in the BLUE App or directly on site from the BLUE Guides. Of course, you can also explore the city on your own, by hire car or with one of the typical minibuses, called Dolmus.

Feeling rejuvenated after the rich breakfast in the hotel (I highly recommend the pastries from the in-house bakery, by the way), I set off in the small coach towards the harbour. The first part of the excursion programme awaits me here. A gulet boat, a kind of wooden yacht, waits for me and the other holiday guests who’ve booked this trip to take us to Alanya. The gulet boats are typical Turkish holiday ships, which feature in nearly every boat excursion in Turkey, whether on lakes or in the sea. 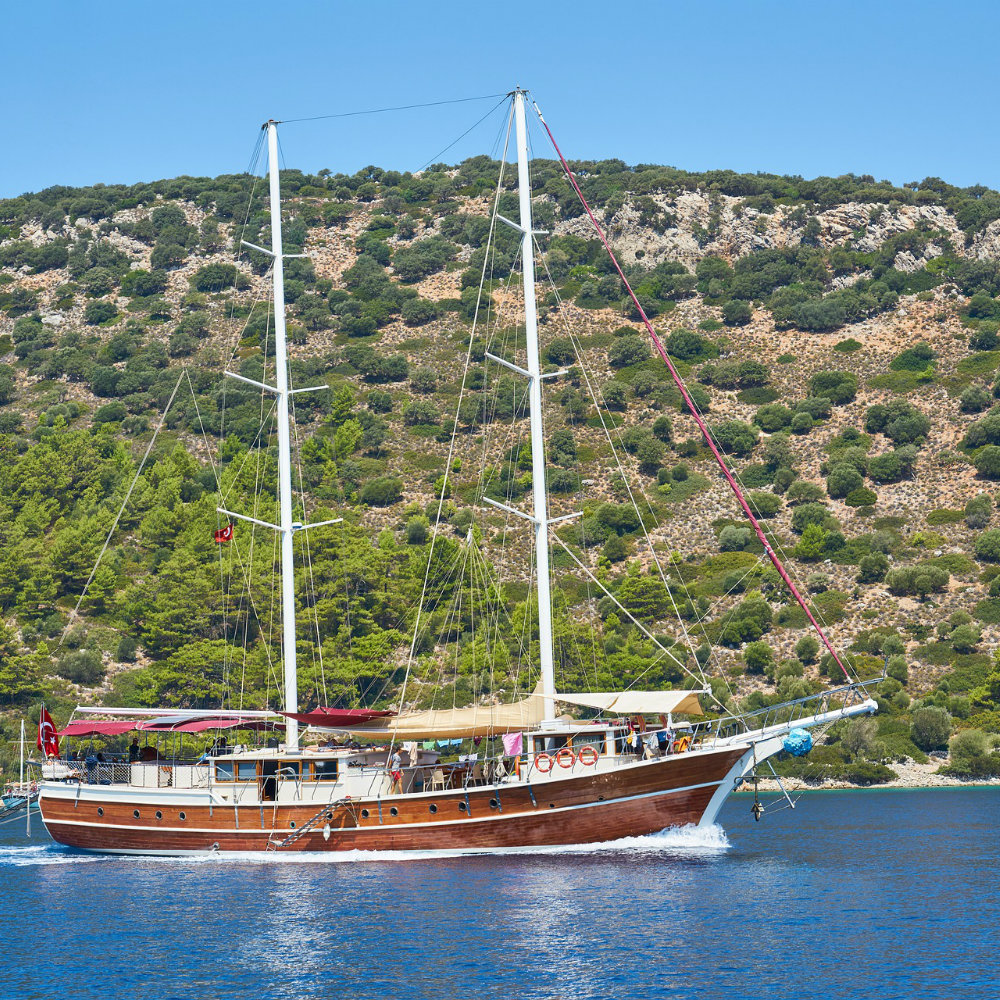 We sail towards the fortress wall on the gulet boat.

In the footsteps of the Seljuks in Alanya

From the boat, you can admire the spectacular pirate fortress and the ruins on the castle hill. The 6,500-metre-long fortress wall with its 140 towers, which include the “Kizil Kule” Red Tower – the landmark of the city – is particularly impressive.

The massive fortress of Alanya is one of the most important and enduring castles of the early Middle Ages, and was built by a Seljuk prince high up on a rocky outcropping. The rugged cliff was initially fortified as the headquarters of pirates – hence the name pirate fortress.
From the famous Cleopatra Beach, a cable car shuttles visitors up to the castle hill; from the harbour, the fortress can be reached via shuttle bus. 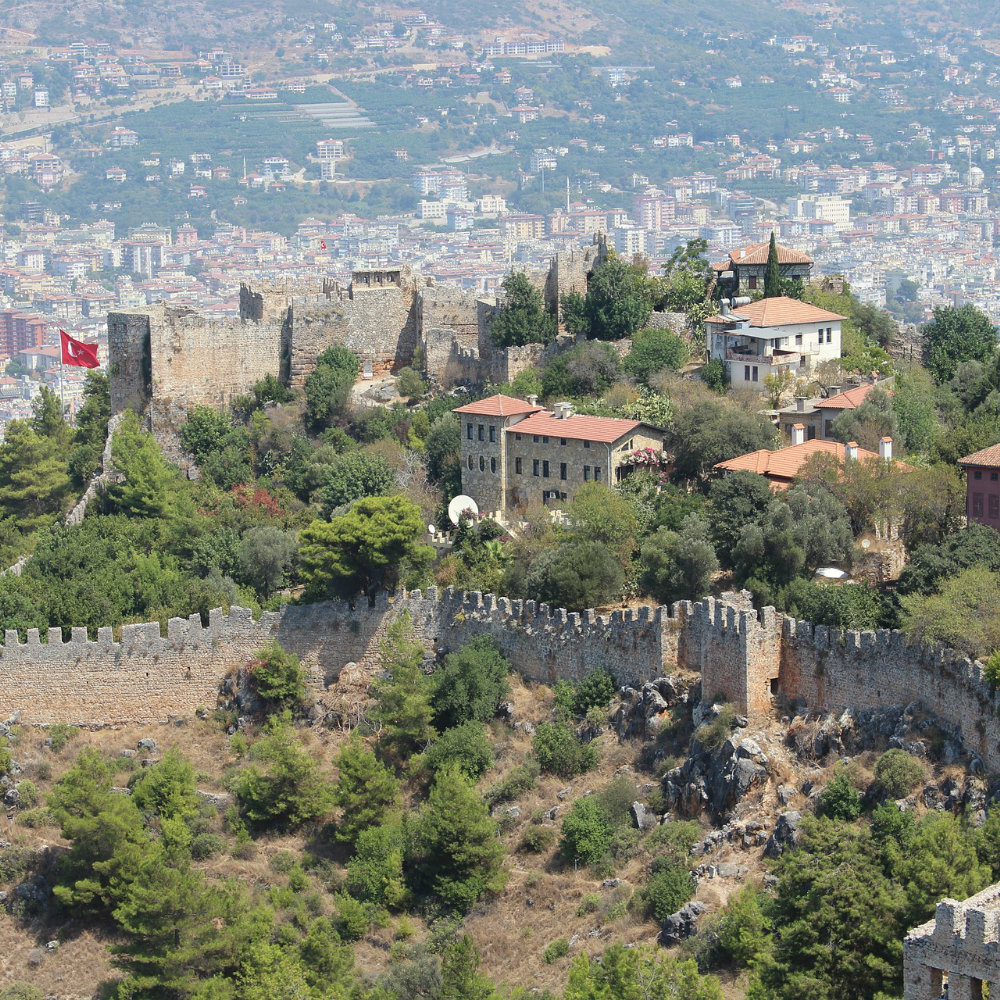 The massive pirate fortress of Alanya.

By the way: The former pirate fortress and the Red Tower offer a magnificent view of the city of Alanya. From the surrounding beaches to the harbour to the green mountains in the hinterland – the view is phenomenal. 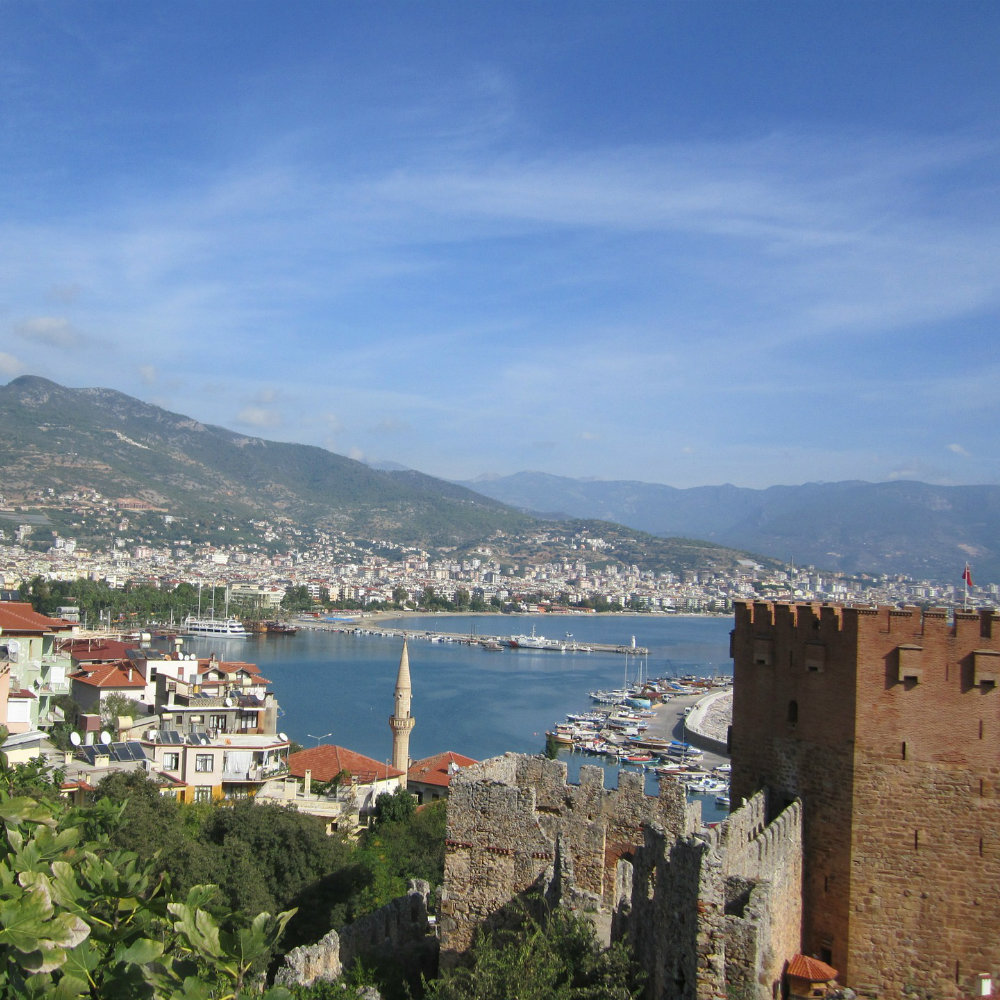 What a spectacular view over Alanya.

#lunchtime – Enjoy a Turkish lunch right on the Dim River

We will have lunch at one of the famous picnic restaurants along the Dim River. These restaurants are especially known for their dreamlike atmosphere and breathtaking location. The sitting areas, tables, and chairs are on small platforms in the river – fantastic!
For lunch, we’re served delicioustraditional Turkish dishes. 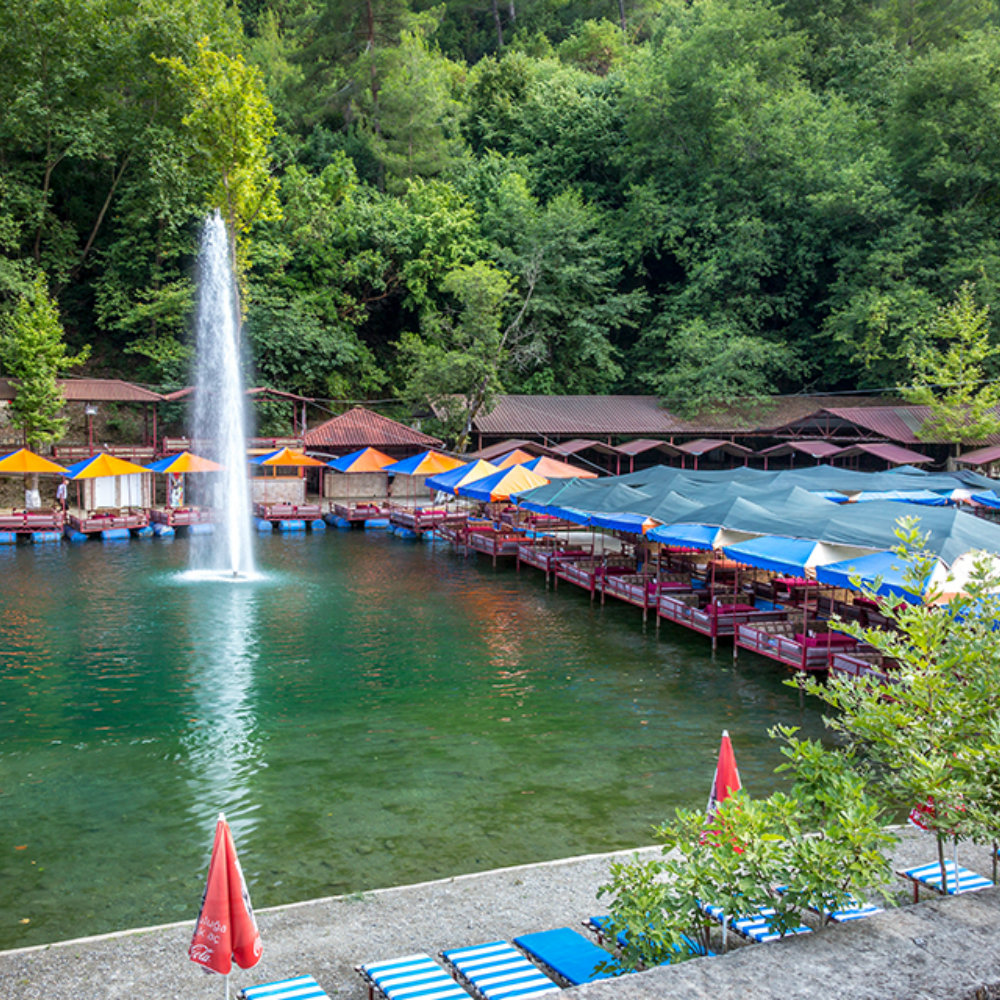 Lunch is served on small platforms directly on the river.

The last programme of the day is the Dimcay Cave, the second largest stalactite cave in Turkey.
The supposedly more than one million year old cave amazes me with its over-sized rock formations, stalactites, and stalagmites.
In addition, the Dim Cave is the longest and highest of all accessible caves in Alanya.

The highlight is certainly the small underground lake at the end of the Dimcay Cave.
From a little further away, I hear flute music. Immediately, the place seems somehow even more magical and mystical when filled with the gentle notes. I come closer and see an old man playing Sufi music on his flute. This style of Islamic music is part of the ritual practice of worship by the followers of Sufism in Turkey. 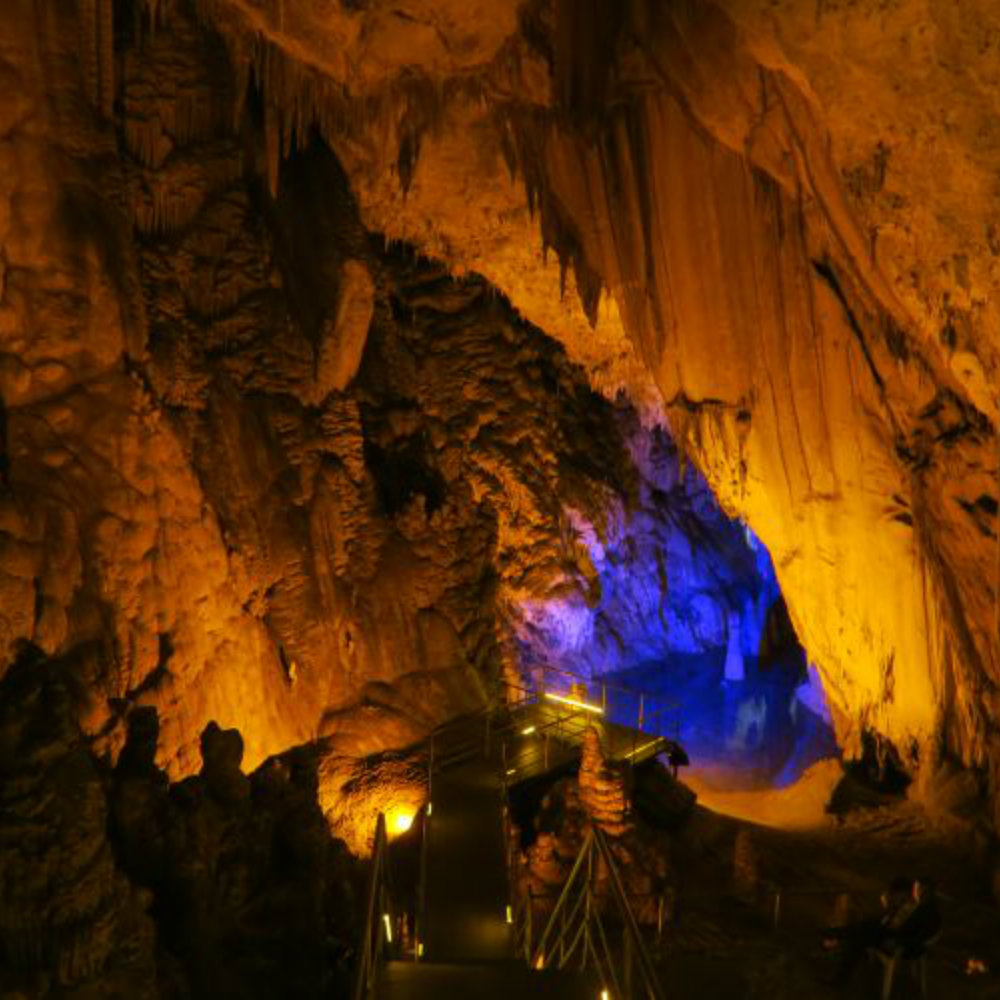 Alanya saves the best for last.

A beautiful day in Alanya comes to an end. I am dazzled by the beautiful city, and can really recommend the trip to you. For me, it’s back to the hotel, because tomorrow another wonderful day in the TUI BLUE Palm Garden waits for me.