Want to discover the magical side of Djerba? Then you can’t avoid this destination – the exotic Flamingo Island. If you find yourself on Djerba, a visit to the island is mandatory. After departing the TUI BLUE Palm Beach Palace via the port of Houmt Souk, you’ll reach the natural patch of earth in the Mediterranean Sea in just 60 to 90 minutes. 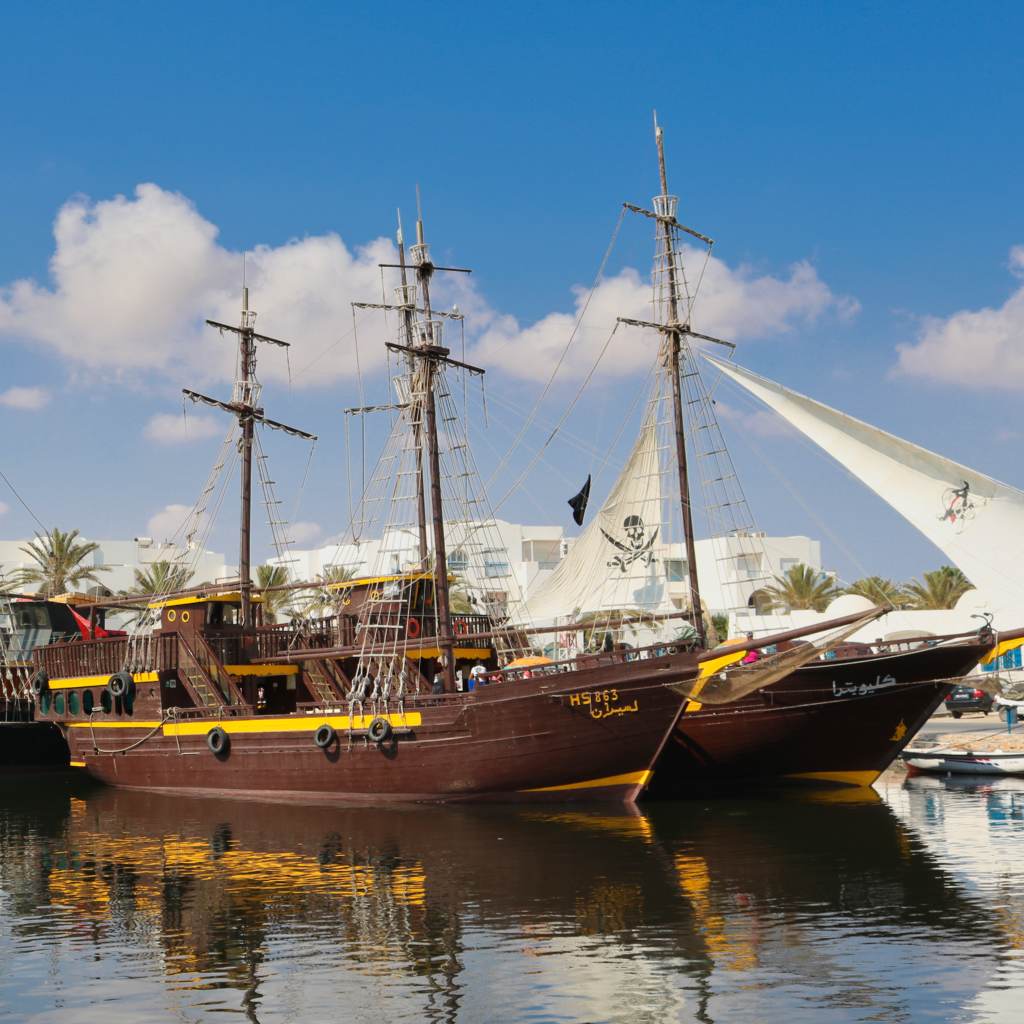 With a ship like this, we’ll transfer to Flamingo Island.

Flamingo Island isn’t just an island, but also a nature reserve where thousands of brightly coloured birds can be found. And yes, you’d be right in assuming that the island owes its extraordinary name to these animals.

I plunged into the adventure for you with one of the many pirate ships to Ras R’mal (the Arabic name for the island).

On a Sunny Day on the Calypso

We sail aboard the Calypso from the harbour of Djerba’s capital out to the open sea.  Pirates climb over the masts, moor the (imaginary) sails, and look for prey. Now and then one of the buccaneers takes time for a photo with a landlubber – of course, I won’t miss out on this opportunity. A short time later, the crystal-clear, blue sea again captivates me. I watch some fishermen who are travelling with their boats and I’m glad that I’m only out on the water for fun and discovery. 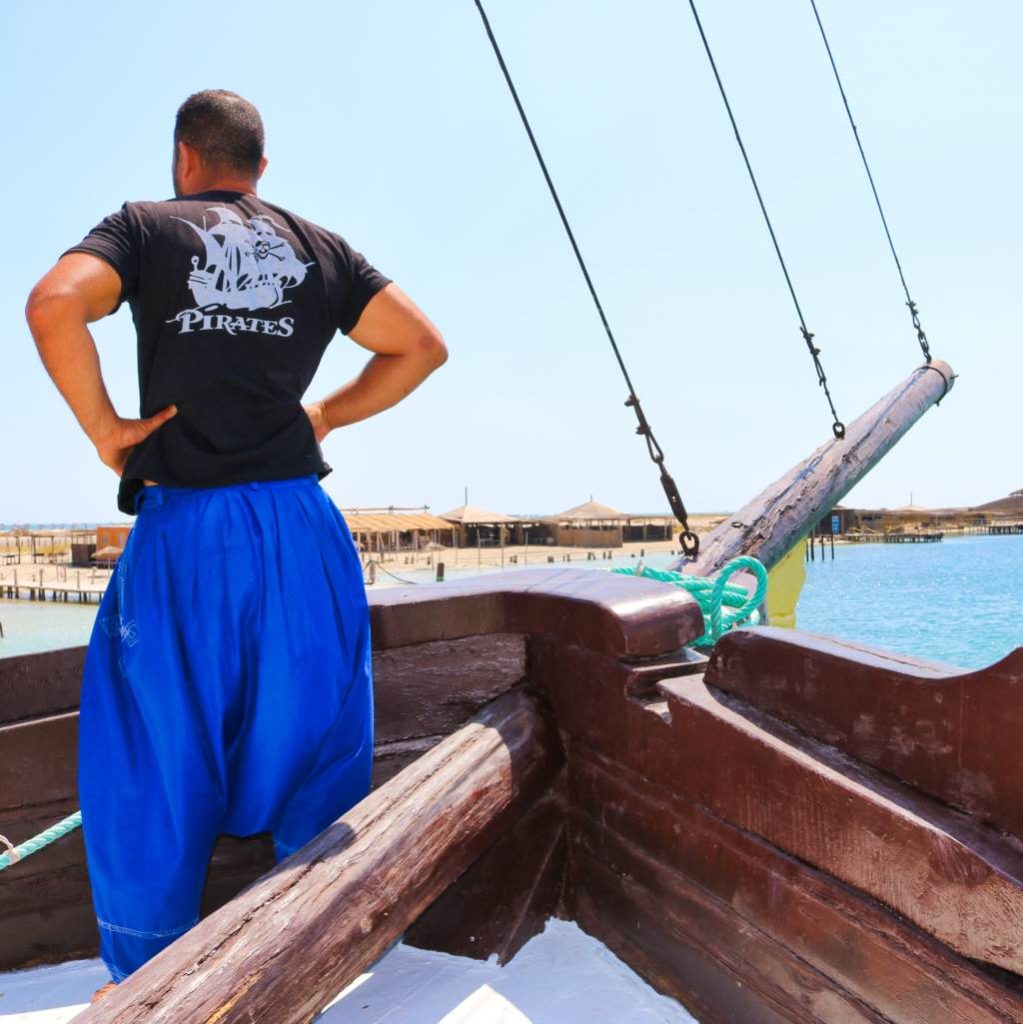 Beautiful views from the Calypso.

No Flamingos on Flamingo Island

The closer we get to the island, the more pirate ships I discover, all heading for the island. But unfortunately, there’s one thing I can’t make out – flamingos. As I learn from the crew, this is because the migratory birds unfortunately only make a stop on Djerba in the winter months. If you want to see the neon pink animals up close, it’s best to set sail between October and February. It’s a pity, but I’m still looking forward to spending a day on the idyllic island. 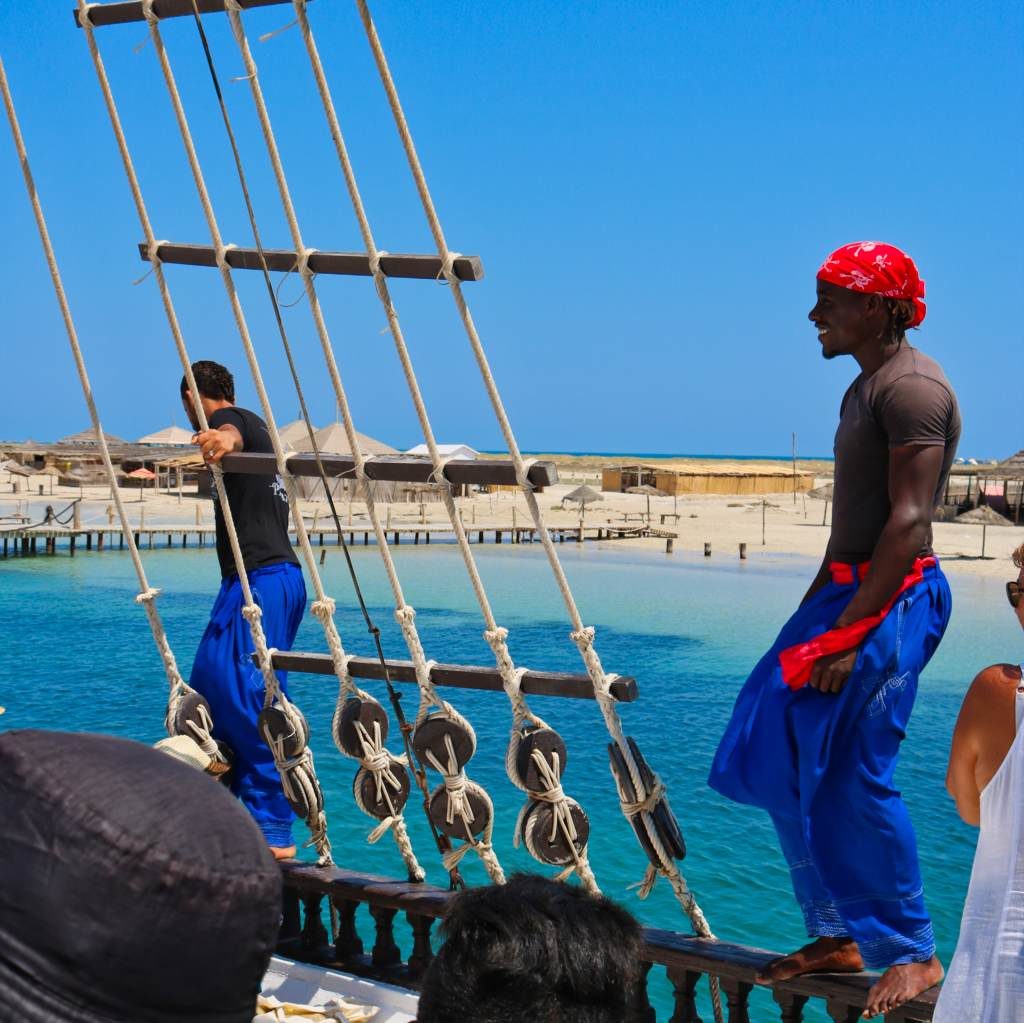 The Calypso is slowly but surely approaching the coastline, and I can make wooden buildings on land that are little more than simple wooden huts. Each ship seems to be heading to its own hut where the other guests and I will later be served a sumptuous meal. Before landing, the captain gives us some information on the rest of the programme. The boss on board the Calypso is articulate, and the announcement is in French, English, and even German. 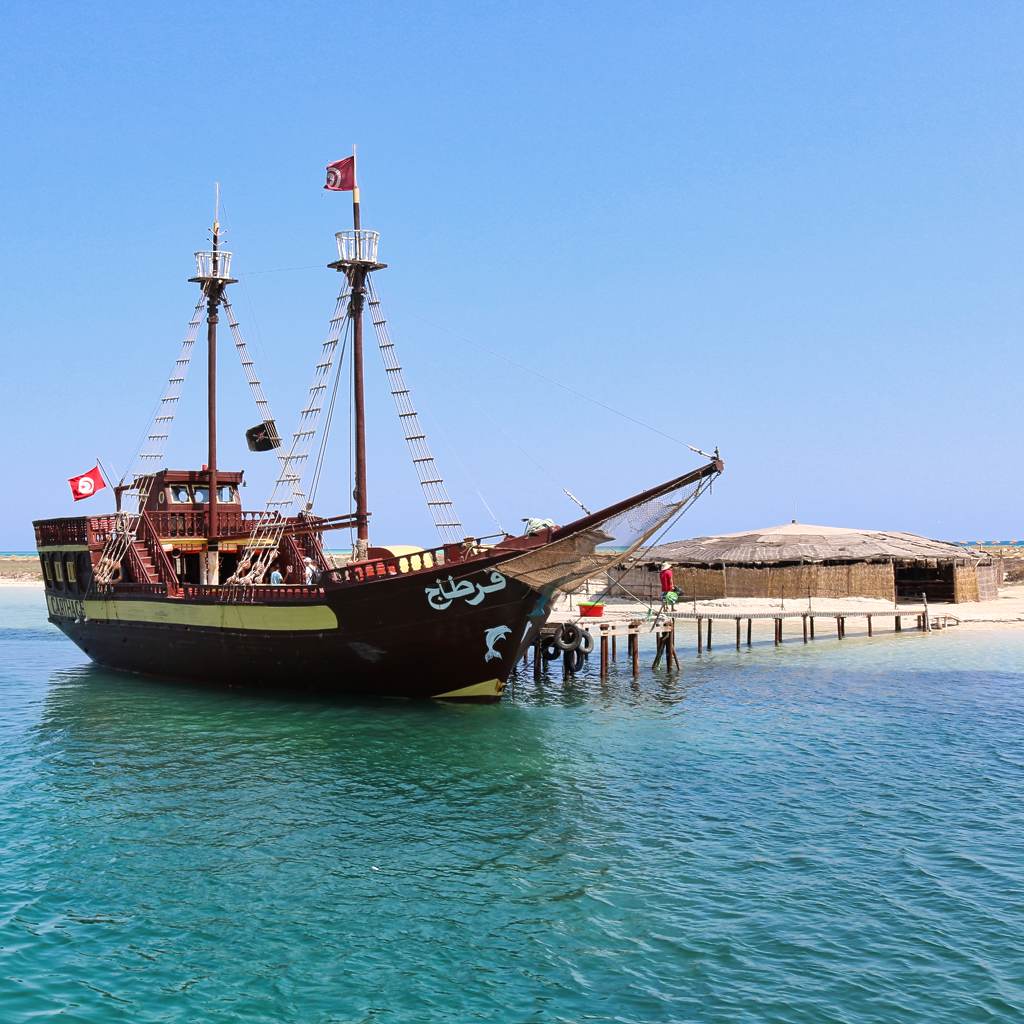 The water invites you to jump in!

The other Calypso passengers and I now have the opportunity to swim in the shallow waters around Flamingo Island.  The beach here is very flat and the water shimmers in all imaginable shades of blue – who can resist that? Not me, because here it’s like paradise – magical. Time passes much too fast and we’re called for lunch. 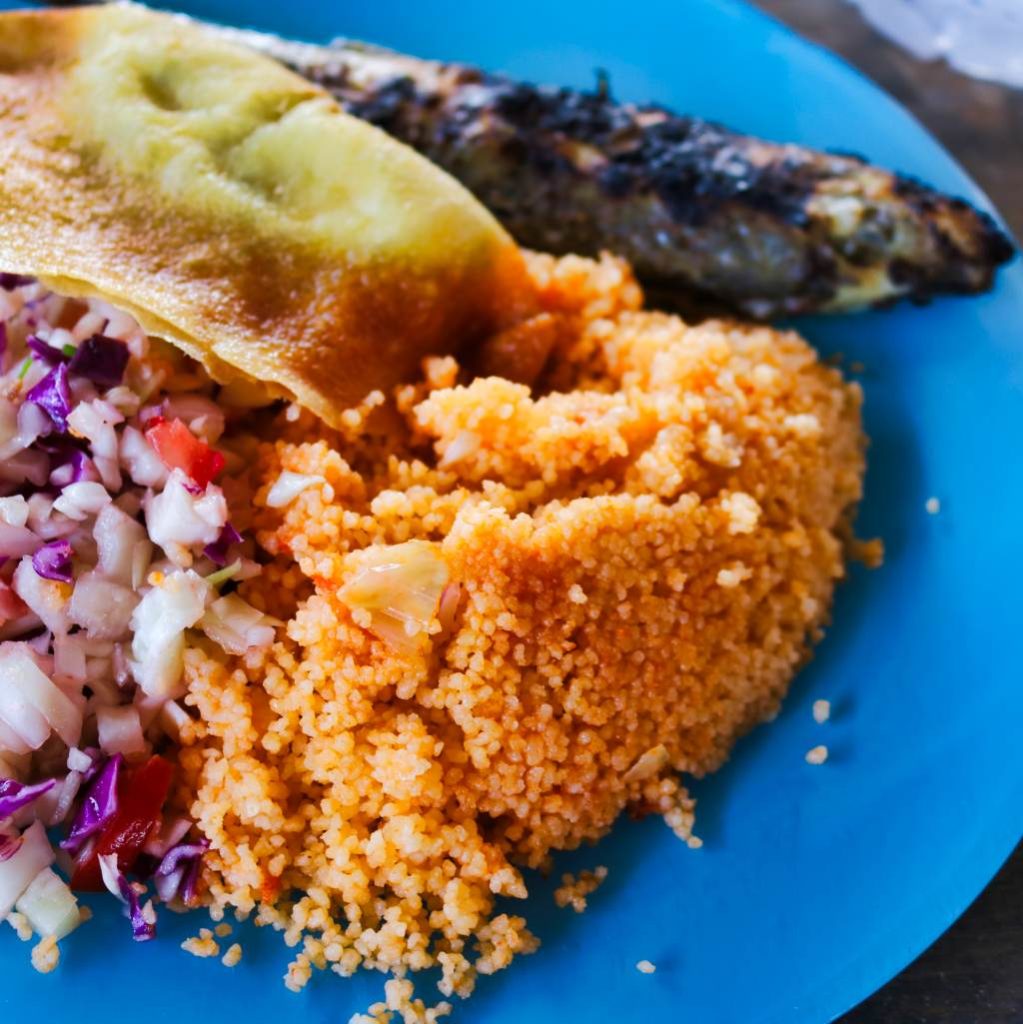 Delicious-smelling Tunisian dishes are served in the palm-fringed hut and the pirates accompany the banquet with traditional instruments.  Local couscous, grilled fish, crispy salad, and tasty brik are served. We pat our full bellies like real buccaneers. There’s a lot of laughter and dancing. 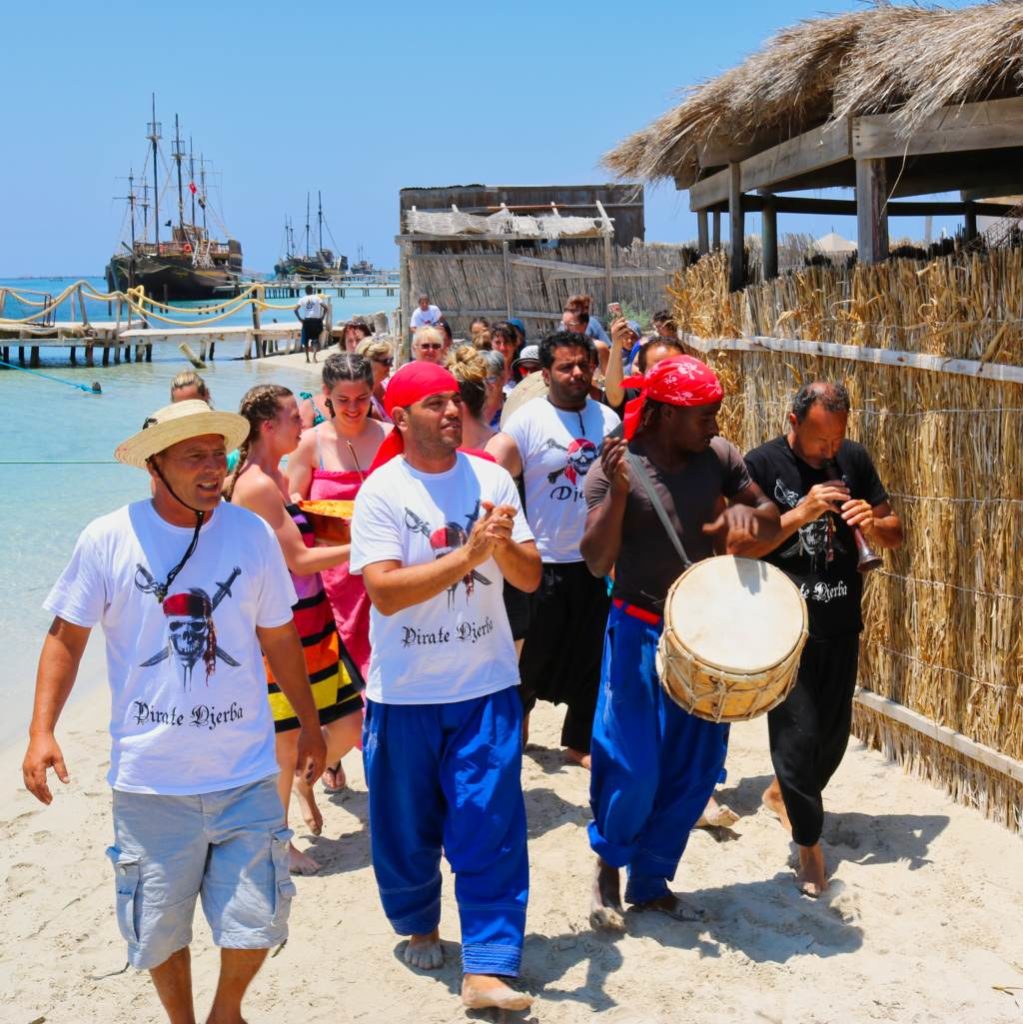 Where there’s a good mood, music can’t be missing.

Towards the Home Port

Time passes way too fast – as it always does when you’re having fun – and before I know it, the captain’s already calling: “All aboard!” The anchor is raised and we set sail from Flamingo Island back toward Houmt Souk. On the horizon, I recognise the fortress Borj El Kebir, also known as Borj El Ghazi Mustapha. It was built on the remains of a Roman Fort in the year 1289 by Roger de Loria, the ruler of Aragon and Sicily, and is today of one of the symbols of the island. I’ll tell you more about that on one of my next adventures on Djerba. The daring pirates jump around on the rigging one last time before the Calypso once again pulls into her home port and all the passengers leave the ship with beaming smiles… 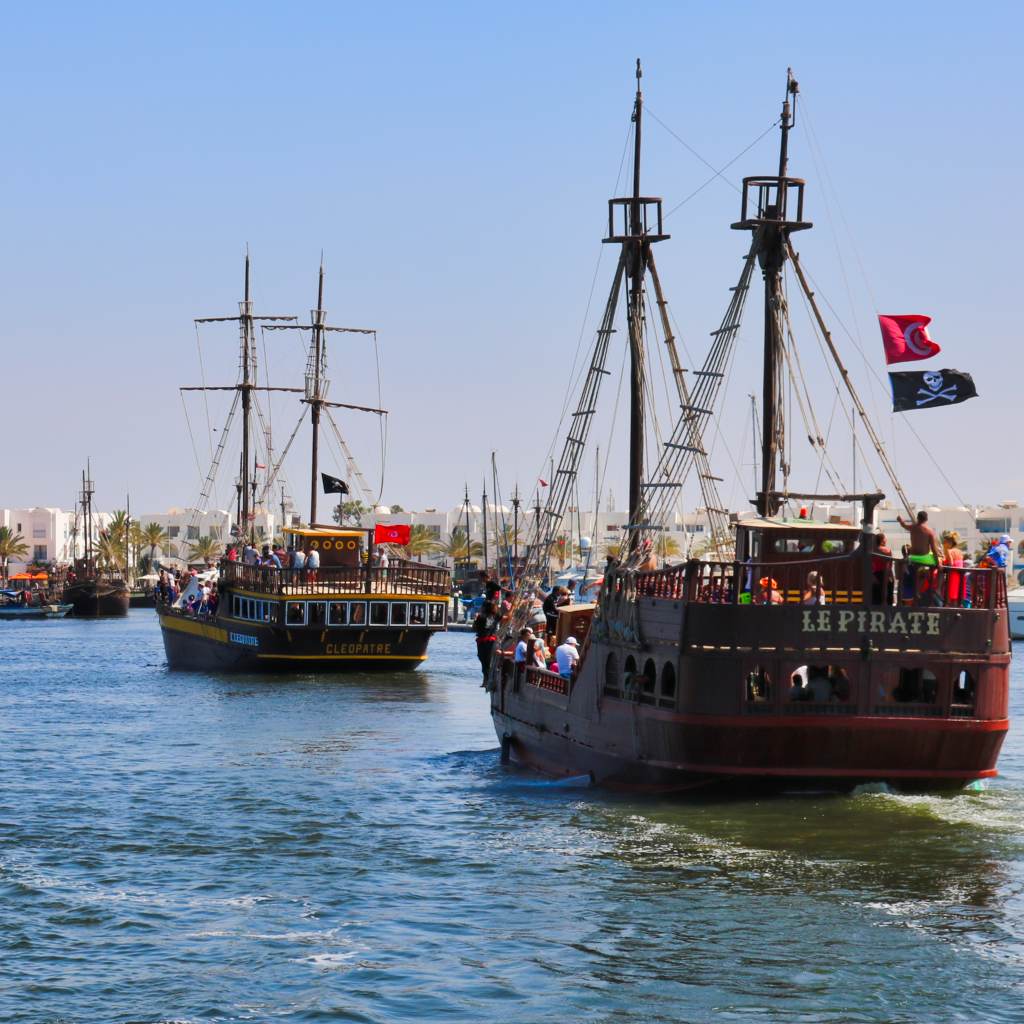 The home port is calling!

It should be noted, Flamingo Island is worth a trip even without flamingos. The island has gorgeous beaches and the food is delicious. This place would only be more beautiful with thousands of pink birds on the horizon.