As a native, I’ve been in Croatia’s hinterland many times, but I had never visited a traditional wine cellar. While most of the guests at the TUI BLUE Jadran relaxed in the shade and cooled off in the sea, I was on the road in the opposite direction: to the mountains!

The journey began in the early afternoon when a minibus picked us up right in front of the hotel. I was accompanied by about half a dozen intrigued travellers. The dedicated guide told us the history of the villages we were passing through, and the tourists listened to her carefully. Although she was quite entertaining, I was a bit overwhelmed by the heat and got lost in my own thoughts. I know this way – I live nearby. Would this trip be interesting for me at all? Would it not be better to just relax on the beach instead of driving 25 kilometres into the back country of Croatia? I wondered what awaited me. The view in the Croatian hinterland, with the town of Imotski in the background

Portal to Another World

We picked up some other guests from Baška Voda and Brela and continued on. Slowly, the bus climbed up into the Croatian wilderness and I woke up – what a view. Before me stood the mighty Biokovo massif; behind me was the azure-blue sea with its numerous offshore islands. “And here is the Tunnel of Saint Ilias…” the guide relayed as we went through the ‘portal’ to the Croatian hinterland. Only four kilometres stood between two worlds with totally different mentalities. While the tour guide told us more about the sometimes amusing differences between people behind and in front of the Biokovo, I looked out the window. Pine, beech, and fir trees ushered us through picturesque villages. I found myself wondering how hard everyday life was for the people who lived here before. There was inaccessible terrain everywhere. Aside from the many stones, there was hardly a spot to build and water wasn’t easy to reach.

The scene soon changed right before my eyes. A huge valley with farmland and a town next to two enormous holes appeared – Imotski. We reached the Vrljika River, crossed a short bridge, and found ourselves in a small town.

The bus kept going up. Shortly thereafter, we reached a giant crater with turquoise-blue water glistening in the sun. The Blue Lake looked very calm. Locals were swimming and sunbathing on the shore, and even a small boat was drawing circles on the water. Our group snapped photos and took in the view of the natural phenomenon in the Croatian wilderness. If you have more time at the Blue Lake, you could also visit the Topana Fortress from the 10th century. You could also walk down to the shore on a trail that was built for a visit by Emperor Franz Joseph. Gospin Dolac Football Stadium, the home of the club NK Imotski, is surrounded by huge limestone walls. We left the Blue Lake and continued to our next destination, a traditional wine cellar. The view of the Blue Lake and the landscape was breathtaking

Wine Cellar in the Croatian Hinterland

The bus drove toward the valley through almost endless vineyards. After passing a church, we went down a small driveway and found ourselves in a spacious courtyard. In addition to a bunch of wooden barrels, we found our cordial host for the next item on our itinerary, winemaker Glavota. “It’s a bit hot up here, so we’ll go down where it’s cooler.” The friendly gentleman welcomed us in excellent German as we entered his stately home. Old staircases decorated with relics and tools from forgotten times led us down to Glavota’s wine cellar. To “warm up”, the nice, elderly man first served tart grappa for the gentlemen, wholesome cherry liquor for the ladies, and sweet figs for everyone. Everything we were served in the Croatian hinterland was grown, bred, or brewed there. Olive oil and bread were then laid on the table and the first wine of the day was served – a Chardonnay. Mr Glavota showed us how to taste the white wine from Croatia’s countryside. By the way, you can read more about the right way to sample wine here in the blog post by Dirk. Between different wines, we cleansed our palates with a piece of bread and olive oil. 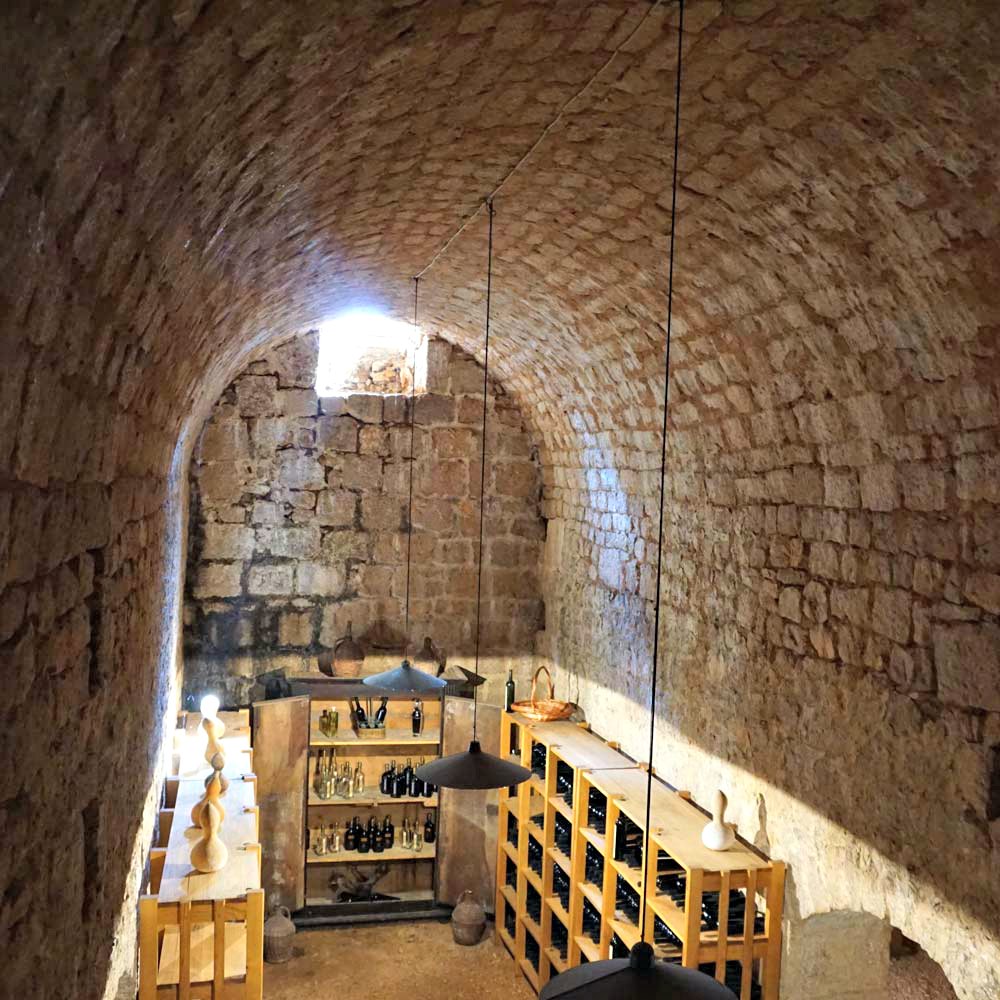 Glimpse into the wine cellar 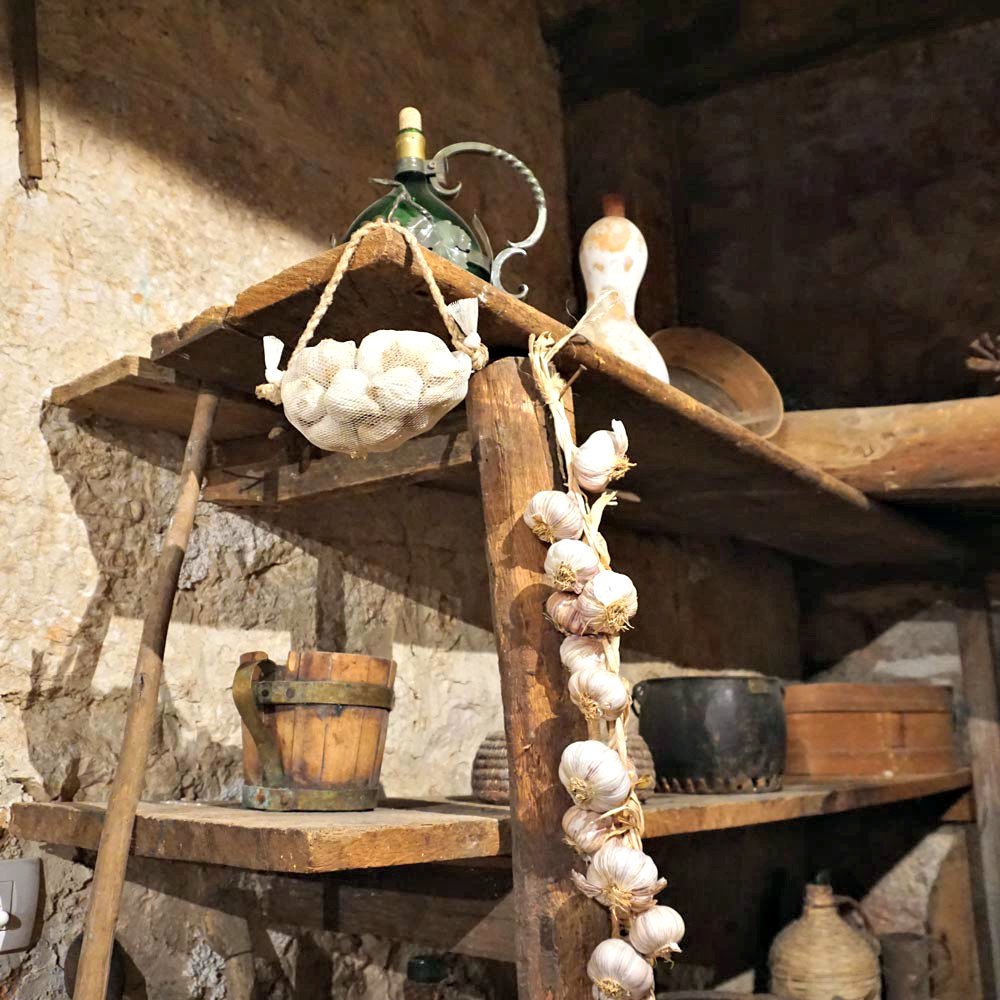 Lovely details, wherever you look 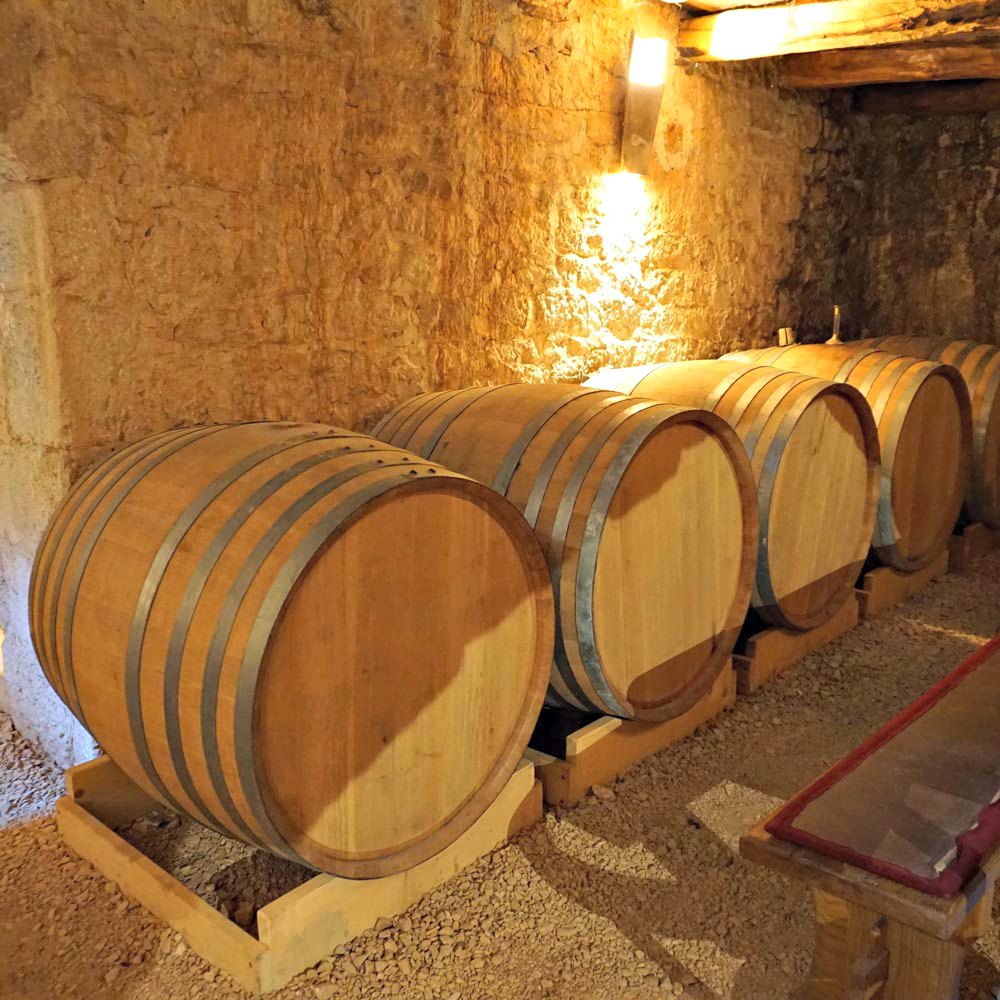 Liquid treasures mature in these barrels

Next was the so-called Kujundžuša, the pride of Imotski and the Croatian back country. “It’s a bit lighter than the Chardonnay, isn’t it?” asked Glatova the wine-grower before he told us about the history and origins of the Kujundžuša. The wine tasted great to me. Of course, the excellent atmosphere in the cool, traditional wine cellar with wonderful hosts added to it. These fine wines were on the menu

Dalmatian Pršut (a Parma ham), cheese, and boiled eggs came next, followed by another red wine: Vranac. While we stuffed ourselves with the delicacies of the Croatian countryside, a young man with an accordion entered the cellar and started singing Croatian folk songs with a sonorous voice. As a local, such touristy displays usually horrify me, but this time I found it fitting and appropriate. The next surprise followed shorty thereafter: Mr Glavota entered the wine cellar in the garb of a Hajduk. The rebels once fought against the Ottomans and are still very popular in Dalmatia today. Glavota told us the history of Hajduks and their connection to the Croatian football club, Hajduk Split. Mr Glavota as a Hajduk

The time was flying by, so it was time to leave the cool wine cellar and reenter Croatia’s warm sunshine. Of course, we took the opportunity to shop through the winemaker’s homemade goods first. Mr Glavota and his family waved goodbye to us. After only five minutes’ drive, we left the air-conditioned bus again. One of the largest cenotes in the world was at our feet. The approximately two-million-year-old Red Lake – with its breathtaking, steep, red rock walls – is another impressive natural phenomenon in Croatia’s countryside. Once again, my fellow travelers and I took numerous photos before we headed home to the TUI BLUE Jadran. Return Journey along the Coast

On the return journey, the tour guide told us some amusing anecdotes about the inhabitants of Imotski and the surrounding area. We laughed as we approached the Croatian coast, and the atmosphere in the minibus was boisterous.

Our eventful day ended back in Tučepi in the early hours of the evening. For me, that meant closing time! Time to meet up with my friends and talk about my adventures in the Croatian hinterland with one or two glasses of the Kojundžuša I brought back. Let’s see if it tastes as good as it did in the cellar of Mr Glavota…