The mythical e-bike: hated by many cycling enthusiasts, popular with casual riders and commuters. One thing is certain: Germany is an e-bike nation. Millions of them have already been sold and many renowned manufacturers have their home here. That seems like reason enough to get the feel for the thing, and what better place to try it out than the Alps? Said and done. In beautiful Styria in Austria, my fellow blogger Miri and I spend a whole day on electric bikes. Accompanied and guided by the passionate cyclist and TUI BLUE mountain bike guide, Markus. 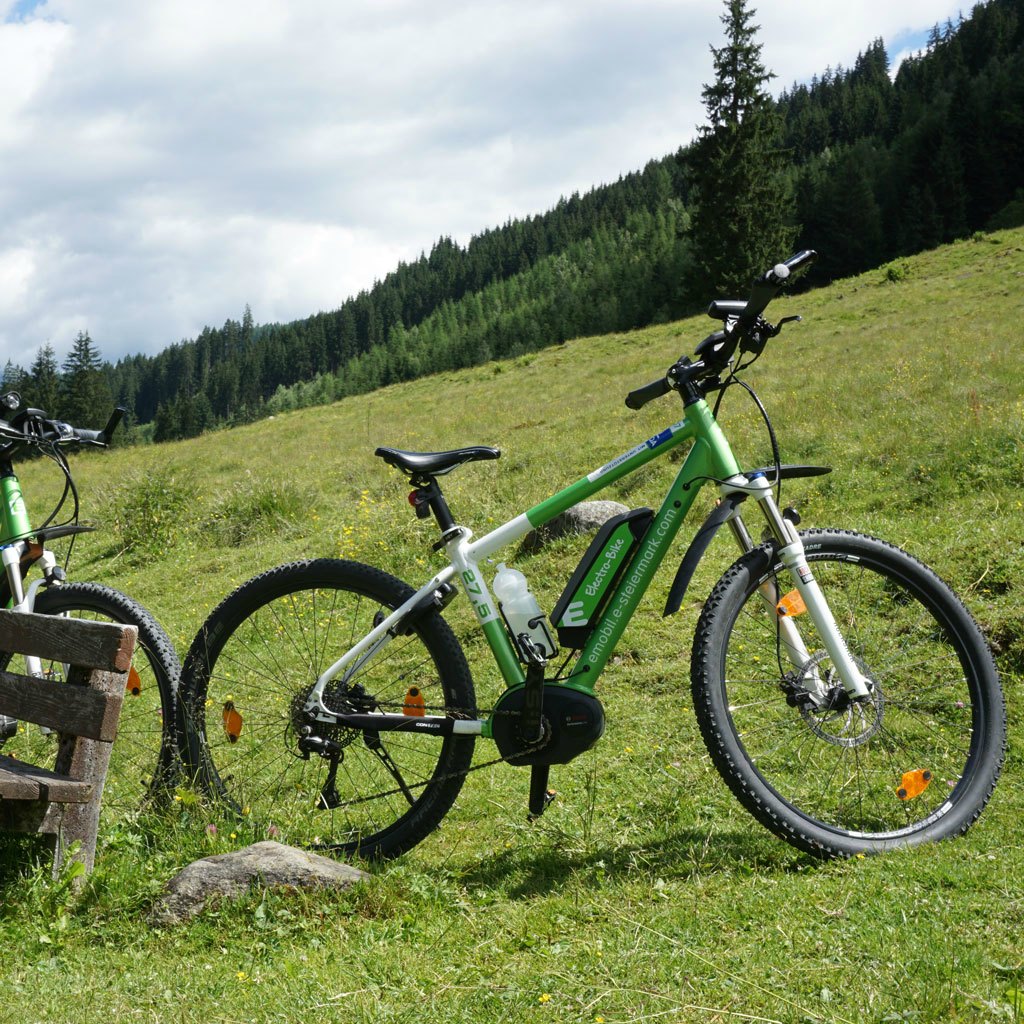 With this bike, we take to the mountains

A question of the right attitude

After a hearty breakfast at the Hotel TUI BLUE Schladming, opposite the Planai, Markus and his e-mountainbikes are waiting for us outside. The guru helps us adjust the seats, straighten our helmets, and explains how the electric mountain bike works. There’s a control unit, which at first glance is reminiscent of an oversized, digital speedometer in the middle of the handlebars. It is, but much more, says Markus. So I can not only read my speed on the on-board computer, but also, for example, query the remaining battery life and set the degree of support from the motor. Miri and I leave the support at a medium level, Markus deactivates his motor completely, and off we go! 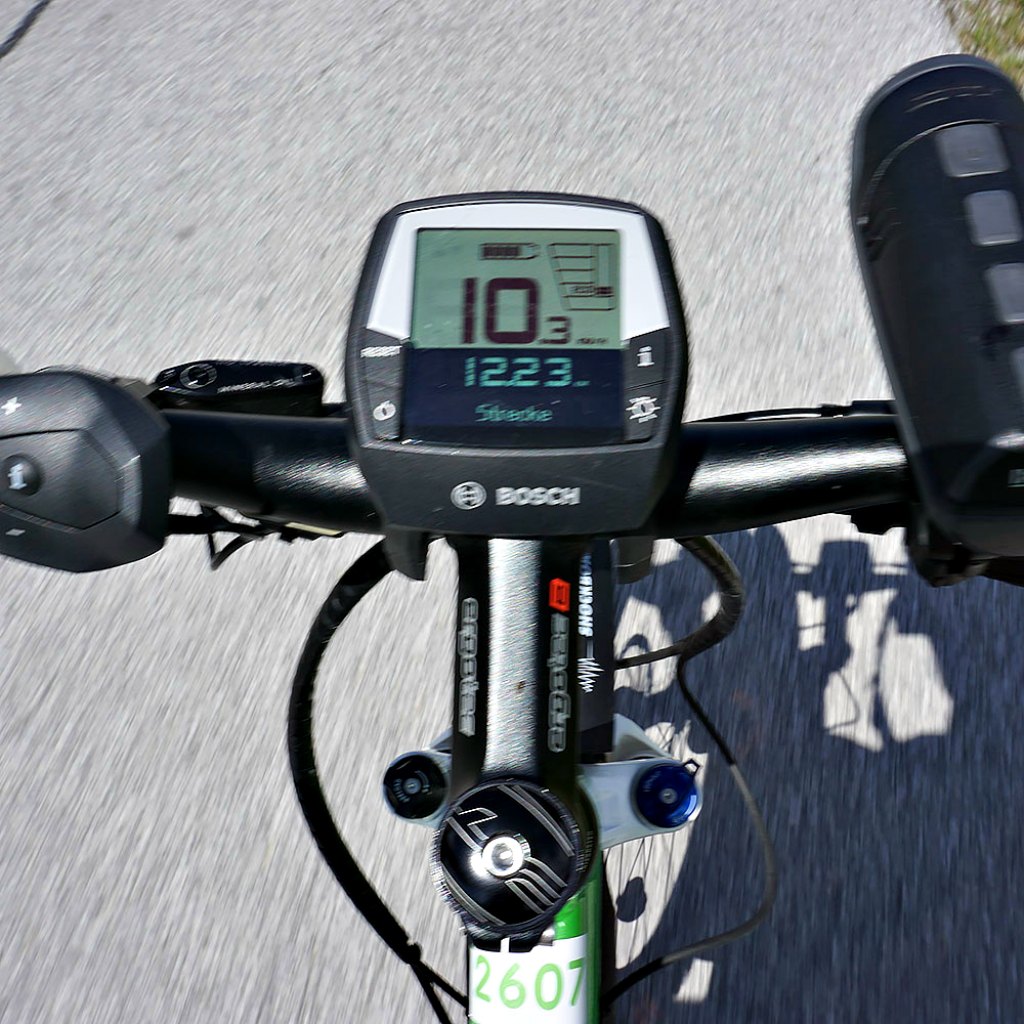 The on-board computer – everything at a glance

Bike in the Schladming-Dachstein

Our destination today is the Styrian Bodensee in the Schladming-Dachstein region. There and back, there are about 40 kilometres of driving distance, including elevation change, waiting for us. For someone like me, who occasionally drives a relatively short and flat stretch to work, that’s no small amount. Therefore, I’m curious to see if the e-bike actively supports me. As soon as I hit the road, I immediately notice the motor, which is located to the left of the pedals, helping me out. Although I still have to pedal myself, it’s unusually easy. We ride casually on our e-bikes through small villages and enjoy the view of old farmhouses with the impressive Dachstein massif in the background – like a backdrop from a picture book. 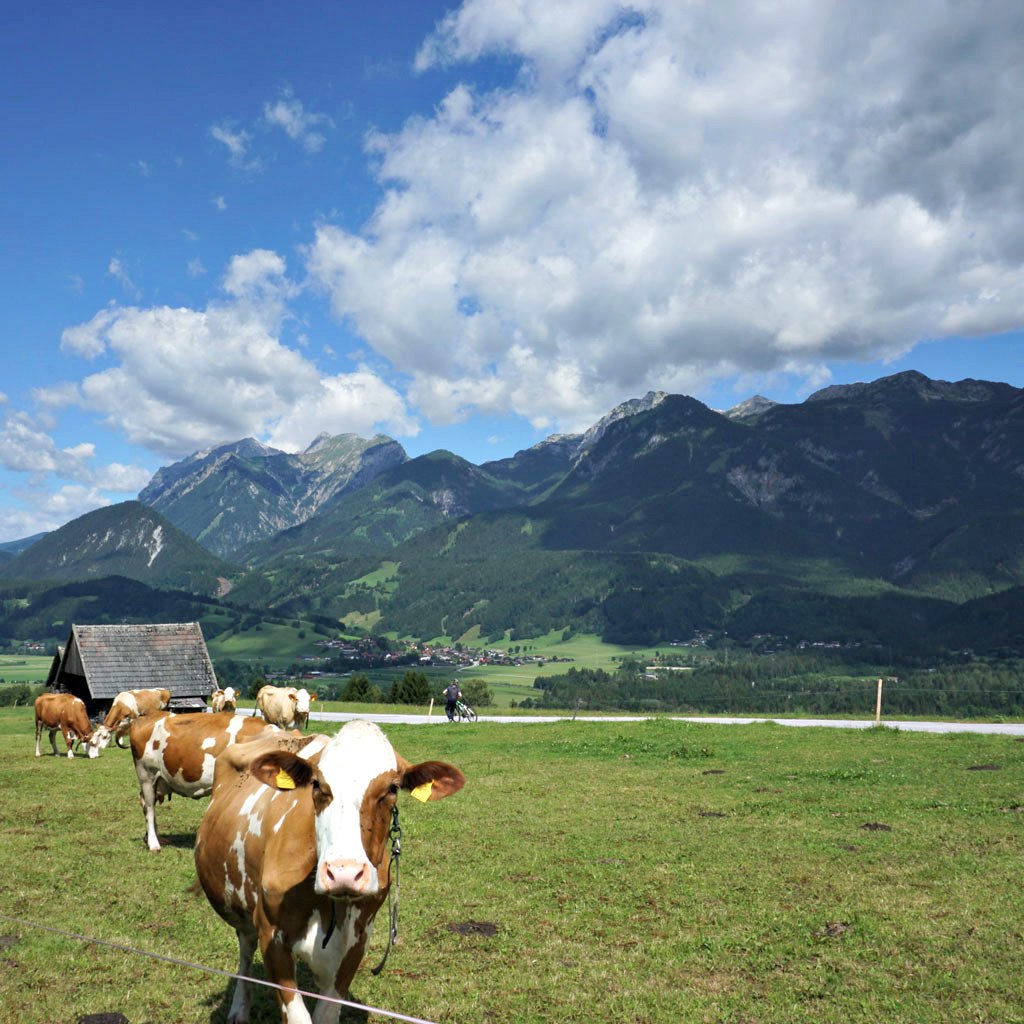 The e-bike and the elevation change

At about the halfway mark, we reach a fork in the tiny village of Höhenfeld and Markus gives us a choice: either an easier, longer climb or a slightly harder, shorter climb. We opt for the more arduous variant, because the longer way would be more fun on the way back. Additionally, the upcoming incline shouldn’t be a problem with the e-bike, should it? 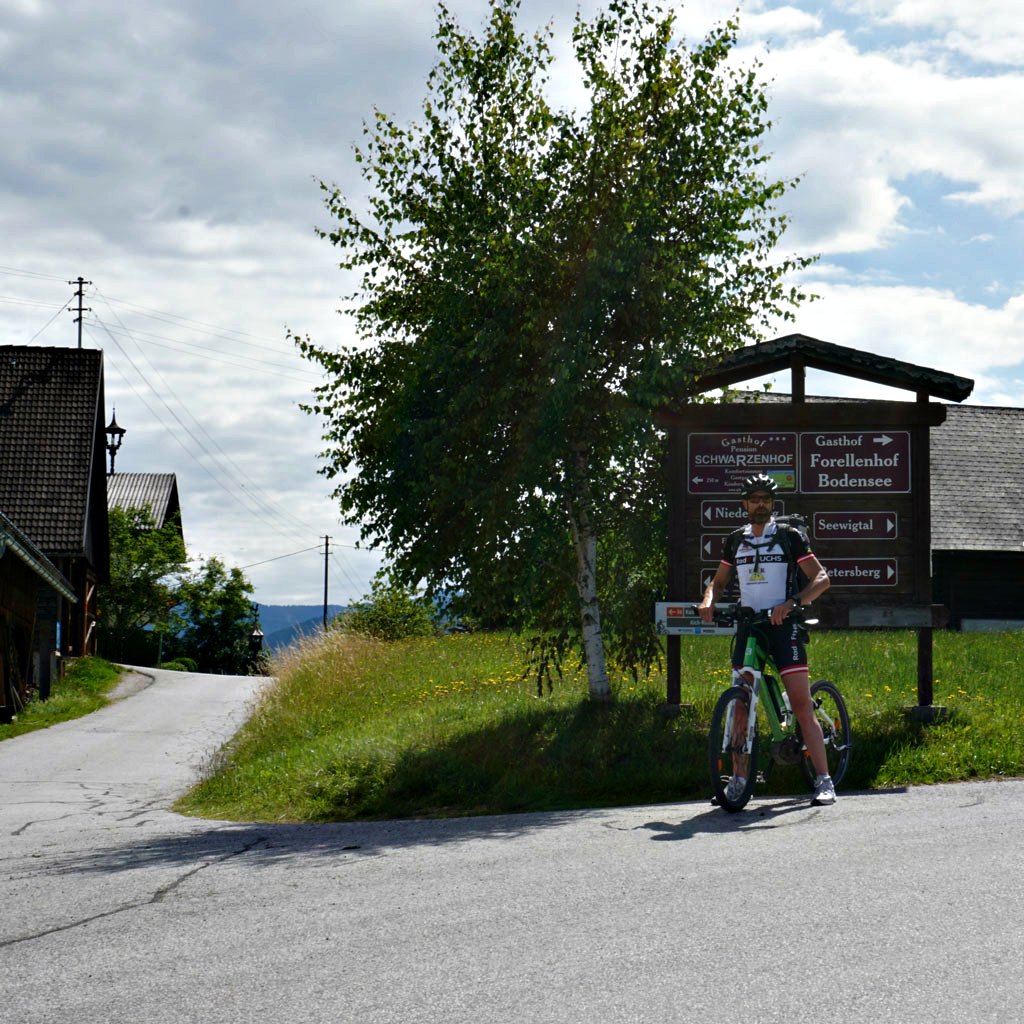 Mountain bike guide Markus wonders where the road is leading us

No, of course not. Miri and I quickly switch our motors to full power and the strenuous climb to Styrian Bodensee becomes easy pedalling. Of course, we have to work harder here than on the flat countryside. But I can tell you that, with a conventional bike, I would have made this ascent only by walking it. Even Markus the cycling pro sets his motor on the lowest level on a steep climb, at least to compensate for the noticeably heavier e-bike. 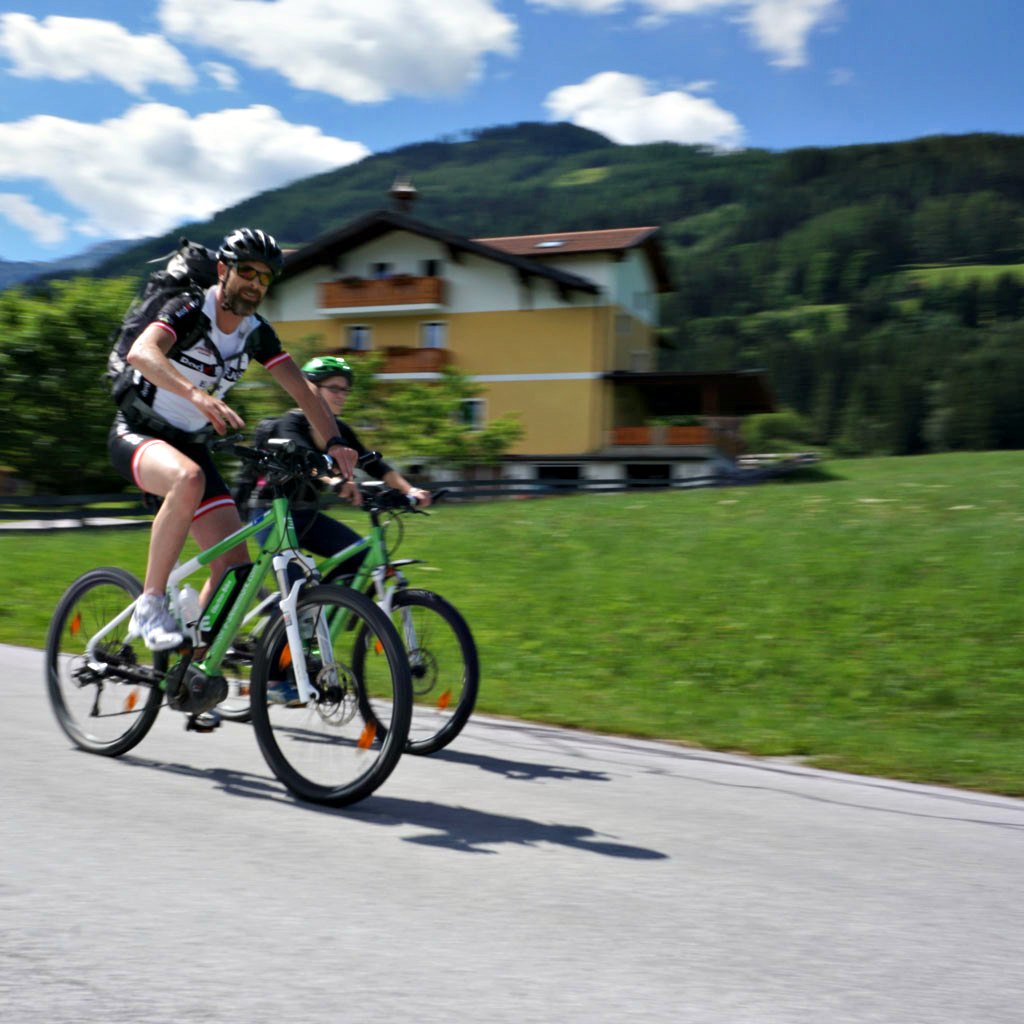 Miri and Markus whizzing by

Enjoy instead of sweating

We pass pastures with grazing cows, feel the warm sun on our faces, and take in the Alpine panorama. In my mind’s eye, I see myself sweating on an ordinary mountain bike, gasping and crawling up the mountain on the edge of death. I’ve already tried this on a fatbike in the winter in the Alps, and I’m happy to escape a similar ordeal this time. Occasionally, we pass visibly strained cyclists who don’t have their own e-bikes. I pity them a little bit. But e-bike or not, the breathtaking view of the Styrian Bodensee and the landscape is worth every effort. 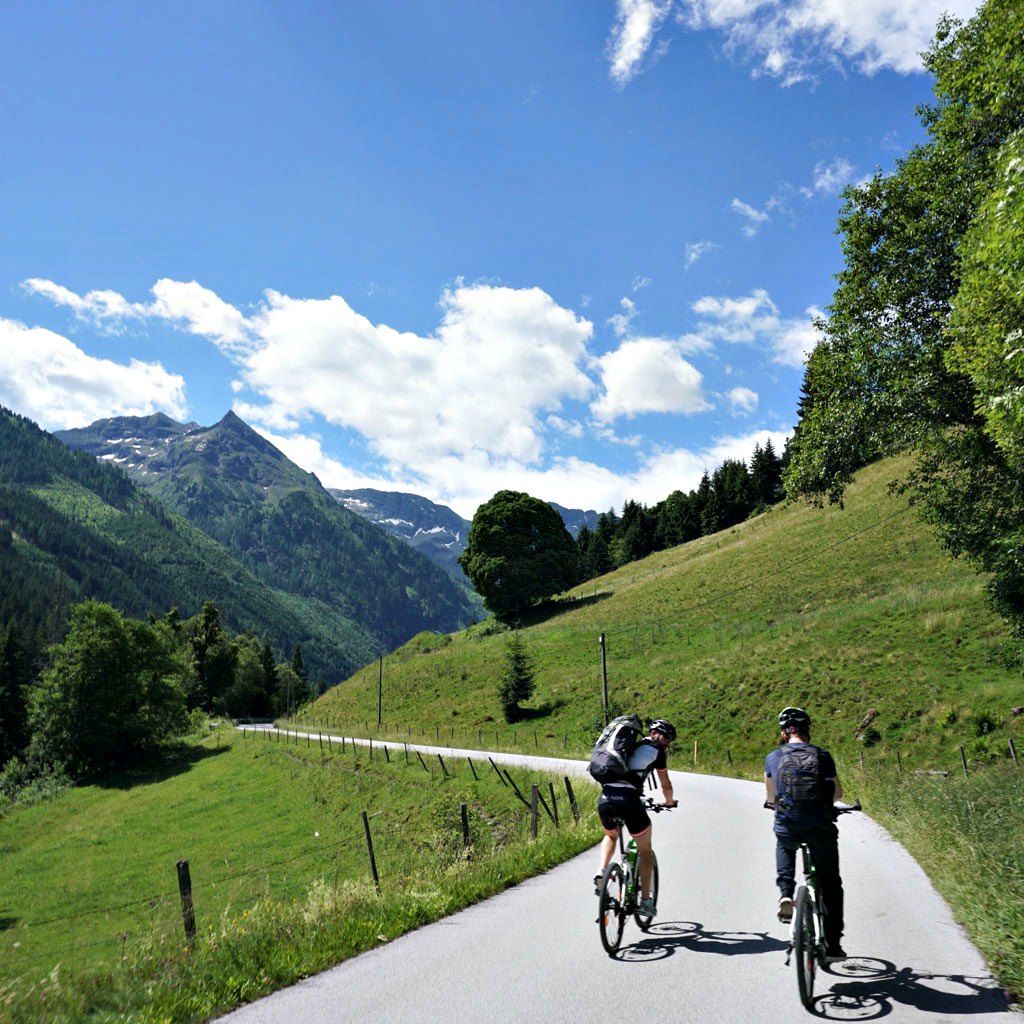 Instead of torturing ourselves, we enjoy the ascent

The lake is located on a small plateau and is flanked by overgrown, steeply rising rock walls. In the distance, a thundering waterfall roars its way down the mountain. It reminds me a bit of Rivendell from the Lord of the Rings films. And once again I notice how beautiful Styria is. 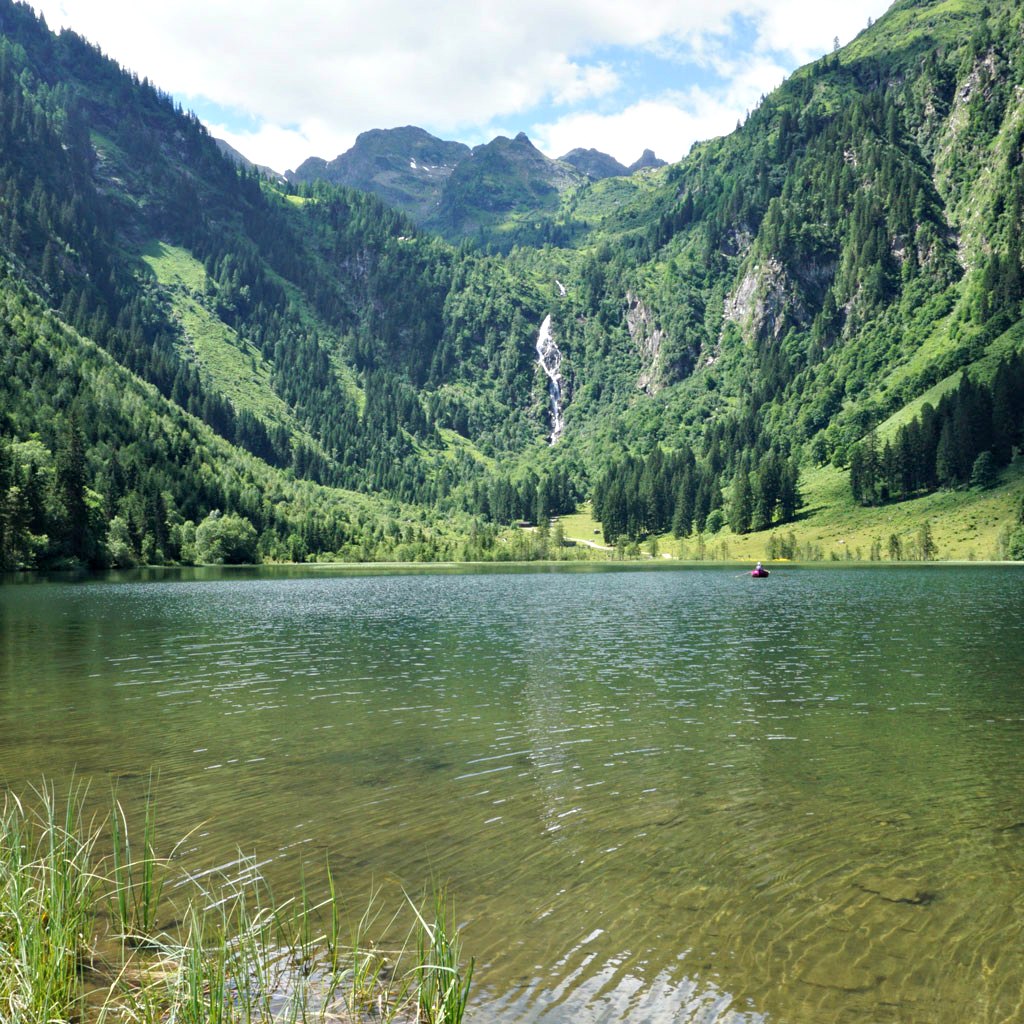 The Styrian Bodensee, like something from a fairy tale

We stop for a while and snap some souvenir photos before riding to the other side of the Styrian Bodensee. Here, we leave the wheels behind and get a look at the impressive waterfall up close. If you want, you can continue hiking to the point where the waterfall falls into the valley. However, Miri, Markus, and I can hear our stomachs growling, so we return to our bikes and enjoy a traditional snack with the with best view in the Alps. Markus produces one treat after another from his backpack and we eat together.

Together, we regain our strength with a traditional snack

Fortified and somewhat wistful, we turn our backs on the lake and make our way back to the valley. During this time, I note that the e-bike is a very practical invention on a full stomach. As we agreed with Markus at the beginning, we now take the longer path to the valley. It’s now about 20 kilometres back to the hotel. A good part of it leads us via serpentines to the already known fork in Höhenfeld, and it’s worth every metre of it! 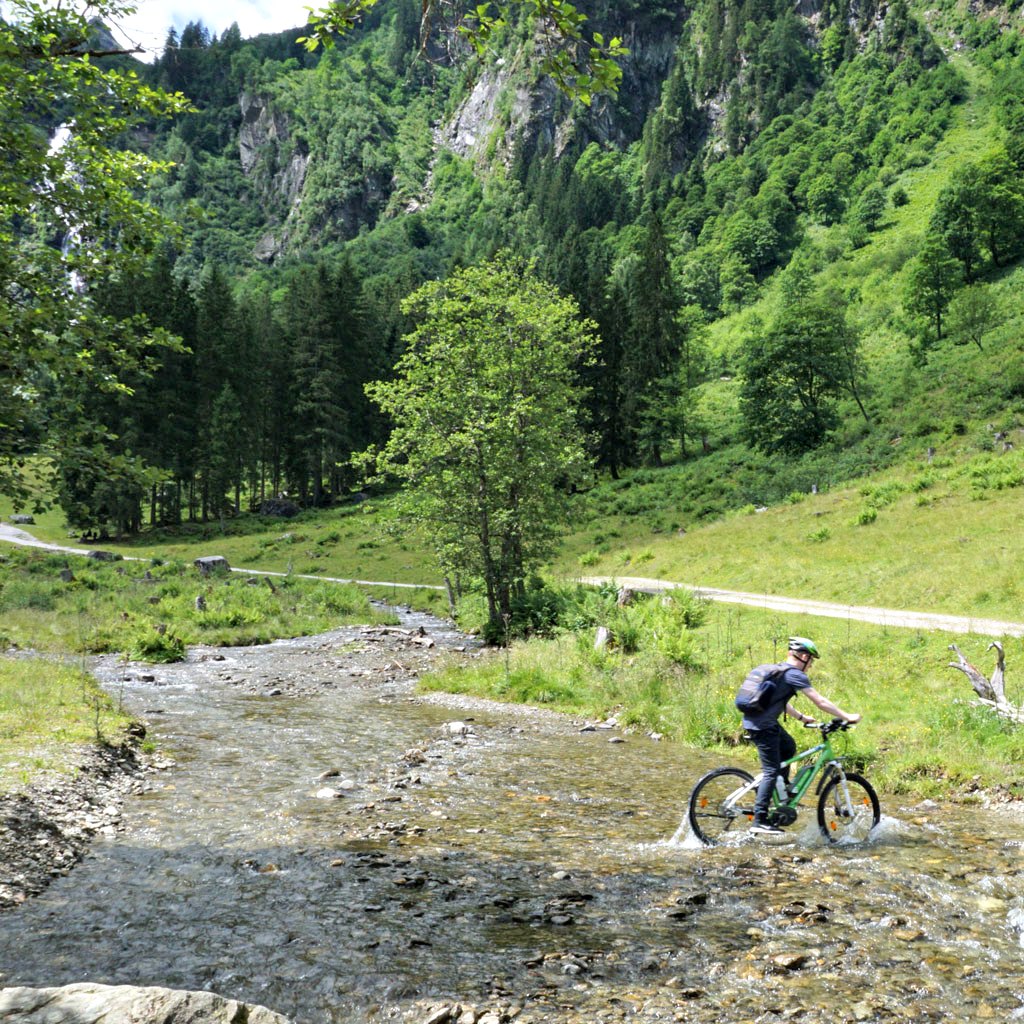 Full throttle into the valley

First on long, straight stretches, then around curves, we rush into the valley. I am highly focused, because at this speed any lack of concentration can end badly. The adrenaline shoots through my body and I fly downhill with tunnel vision. Safely back in the valley, I can see the same enthusiasm over the rapid descent in the faces of Miri and Markus. This is usually the part of a bike tour where I’d like to immediately put the mountain bike away and recover. Often, however, I still have an arduous ride home. That’s still the case, but this time the e-bike does the last, annoying kilometres almost by itself. 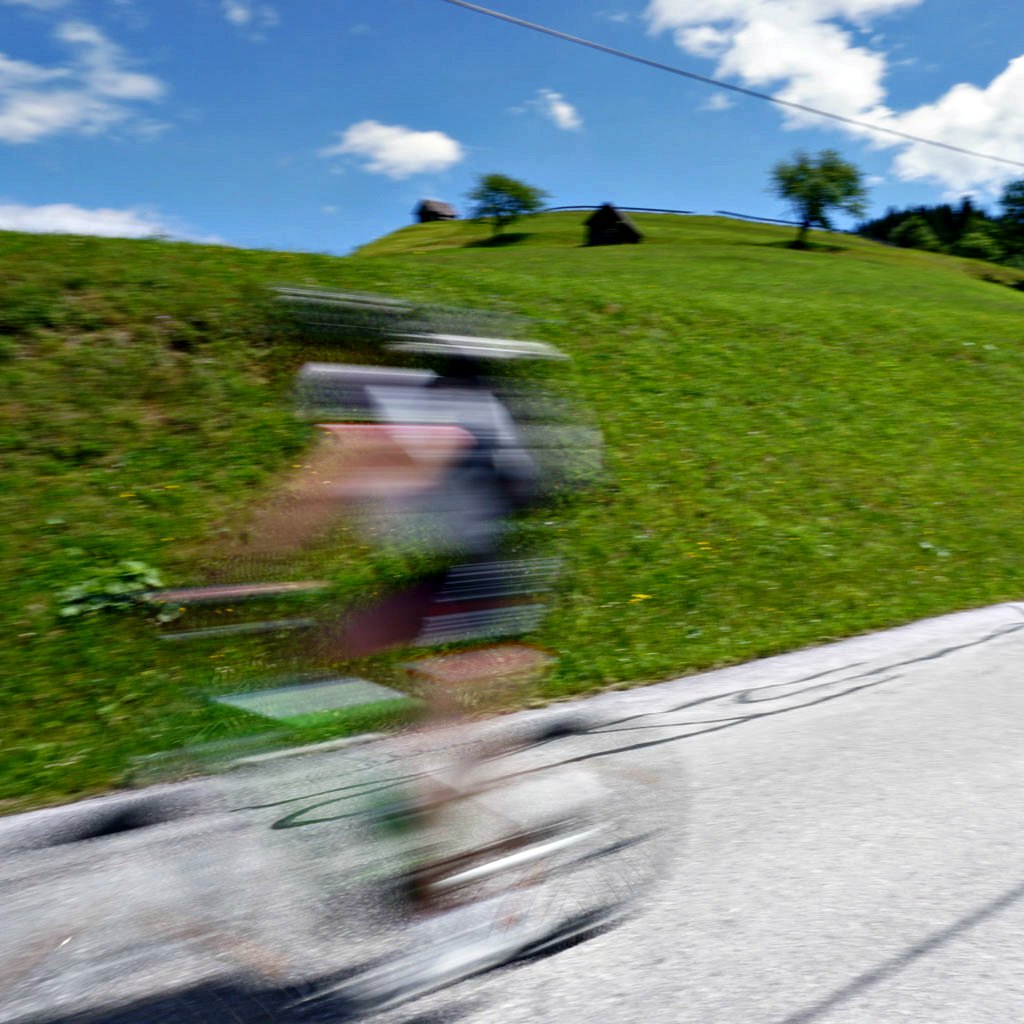 On the way into the valley, there are high speeds at play

Back at the hotel, everyone is still ecstatic about the whole beautiful day in the Alps and my conclusion on the e-bike is clear: it makes it much easier, if you want or need some help. The settings are so versatile that they can satisfy everyone and I wouldn’t want to miss out on the support of a motor if I needed it! If this is still too much effort, we recommend a ride on a mountain cart or e-gokart.