Brain Kinetics: Fitness for the Brain

10 May Brain Kinetics: Fitness for the Brain

Brain kinetics? What’s that? Well, BLUEf!t is a great thing. Sports and fitness in the fresh air, by the sea and in the mountains. Additionally, there’s healthy food and soothing relaxation. A holistic thing, you might say. You can train your body in a group or individually, in functional training and on your bike during mountain bike tours. Afterwards, you can enjoy a regenerating BLUEf!t massage in the spa, and during meals you can provide your body with all the nutrients it needs to start the next training session. It’s not only the body that recovers, but also the soul. But somehow there’s still something missing to round things out.

After some research, I come across the missing link. What are we actually doing for our brains? Everyone has one, but only a few exercise it and push it to its limit regularly, even though it’s so important. Wouldn’t it make sense if you could also train your brain with our help? I pick up the phone and a fantastic journey begins.

Our Brains Are Changeable

A few days later, I meet Oliver in Crailsheim and let myself be whisked away into the world of brain kinetics. When he speaks, I see the gleam in his eye and I listen with interest to his explanations.

“We humans have the ability to change habits, patterns, and entrenched behaviours. So we can also change our conduct and personality. Because everything is ultimately based on neural connections in the brain, full-body brain kinetic training establishes a foundation for change. Because movement is the basis and the key to brain development and learning. And nothing works without our brains!” That sounds logical and I’m drawn back to my university days. A lot of what Oliver tells me sounds very familiar. 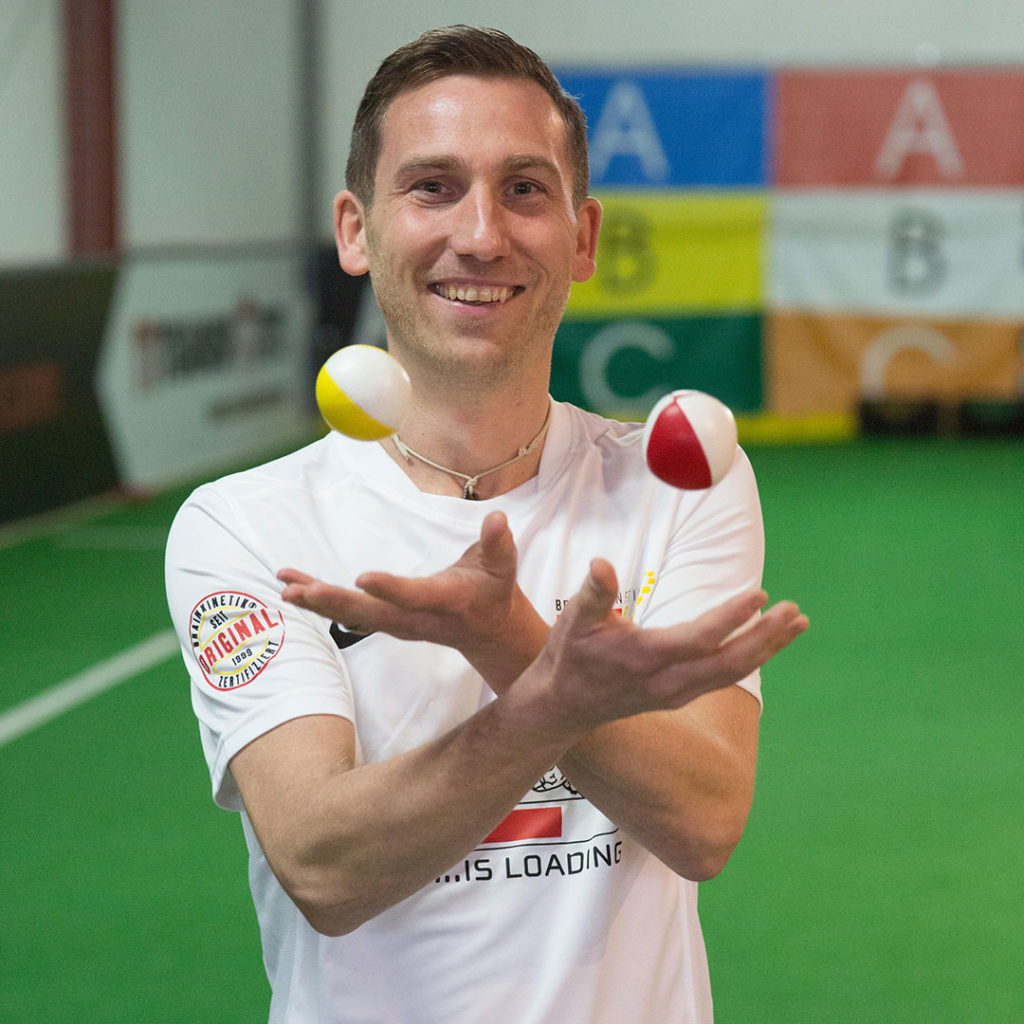 The Connection’s the Thing

Training with brain kinetics creates new connections in our brain and activates our natural senses. Because the better the perception and processing in the brain, the better our body-mind feeling, which results in reduced-stress stimulus processing as well as an increase in mental and physical resilience. All of these positive effects ensure that people get along better with themselves and the tasks and requirements set before them. 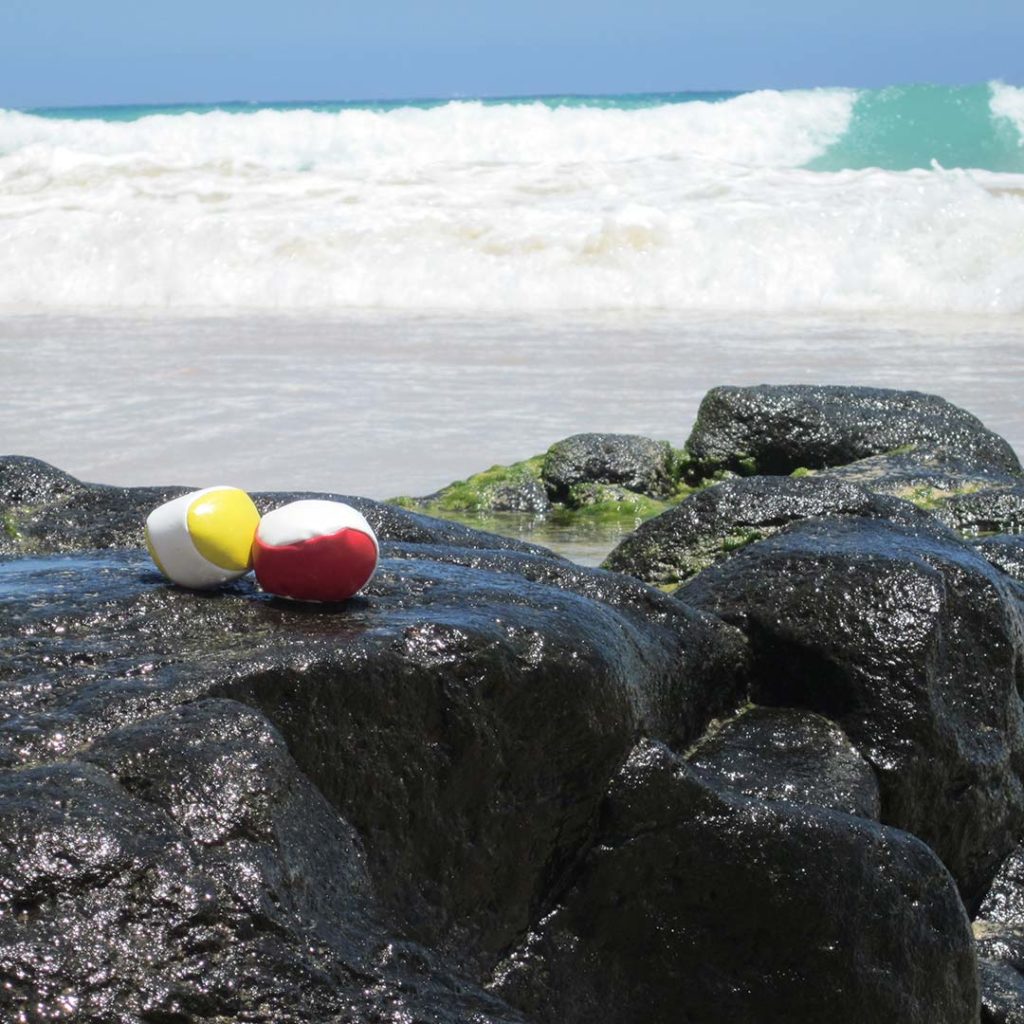 Train your brain by the sea? Sounds good!

But how does that work?

Through unusual body exercises, new connections are created naturally in the brain. The more complex the exercise, the more complex the corresponding connection. Scientific studies confirm that coordinating exercises have a positive effect on brain development. Performance has been shown to improve. And the genius of it is that even if the circuits are created by movement, they can be co-opted by other regions and used for thinking. 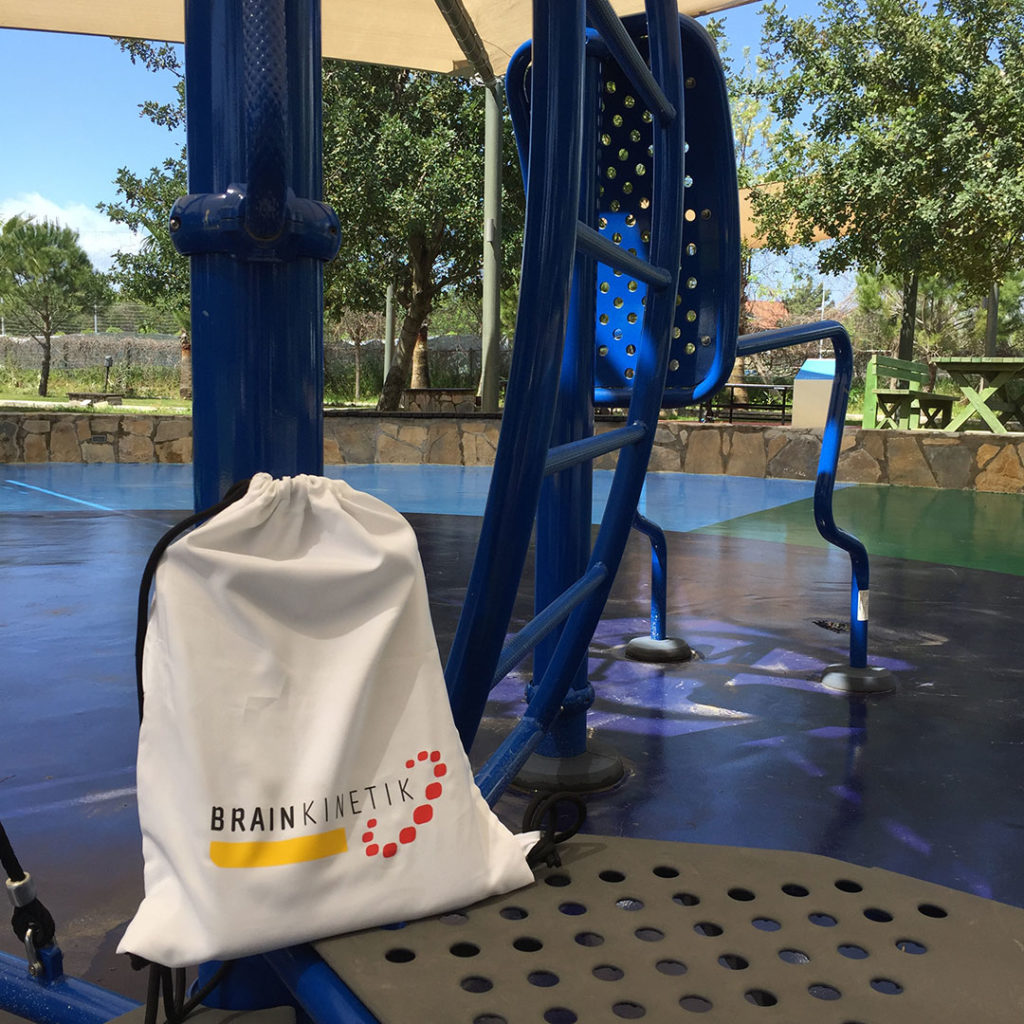 You can do brain kinetics almost always and everywhere.

And brain kinetics is fun just because the exercises are designed in such a way that they usually don’t work the same way, and thus look equally funny at first for all the participants. It’s only when we do new unknown and unusual exercises that new connections and solutions emerge in the brain. So the more unfamiliar an exercise feels, the better it is for the brain. Another aspect is that connections that arise in a “good state” are much better. Fun is therefore a must for learning and brain development in brain kinetics. 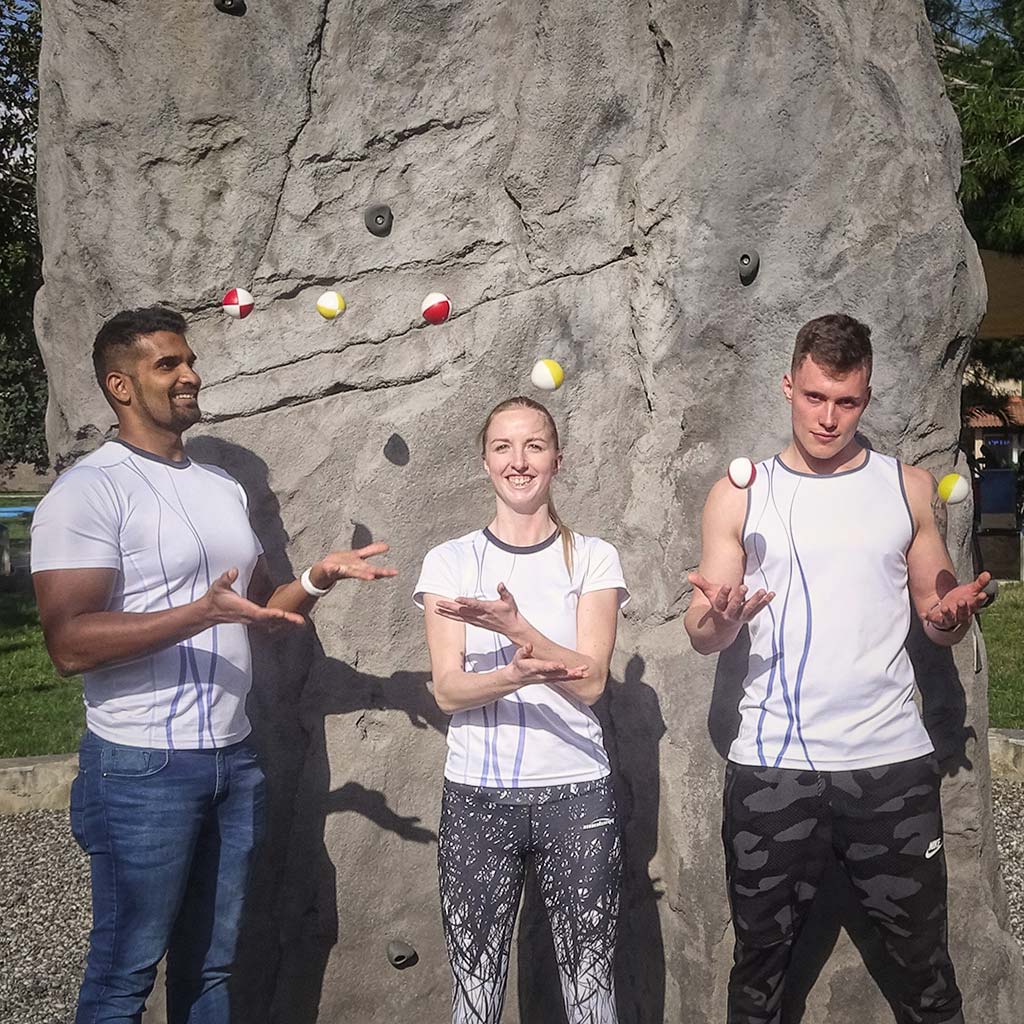 Our BLUEf!t Guides in action

And then it starts. I get two balls in my hands and after a short explanation of the exercise, the balls fly through the air – and to the ground. Ugh, it’s not so easy to cross your arms, keep the balls parallel, and at the same time pay attention to the line on the ground. Thud – the balls are already down again, but I can’t help laughing. The exercises keep Oliver’s promise – what we did was a lot of fun.

A few months later, I see Oliver again at the Hotel TUI BLUE Palm Garden, but this time I’m not alone. Many of our BLUEf!t Guides have also become curious about brain kinetics, and Oliver trains us together in an intensive course. For me, it was a great experience and a good decision to introduce brain kinetics to TUI BLUE. I’ve seen the fun and joy among the BLUEf!t Guides, and I’m sure that they can transmit this enthusiasm to you as well. 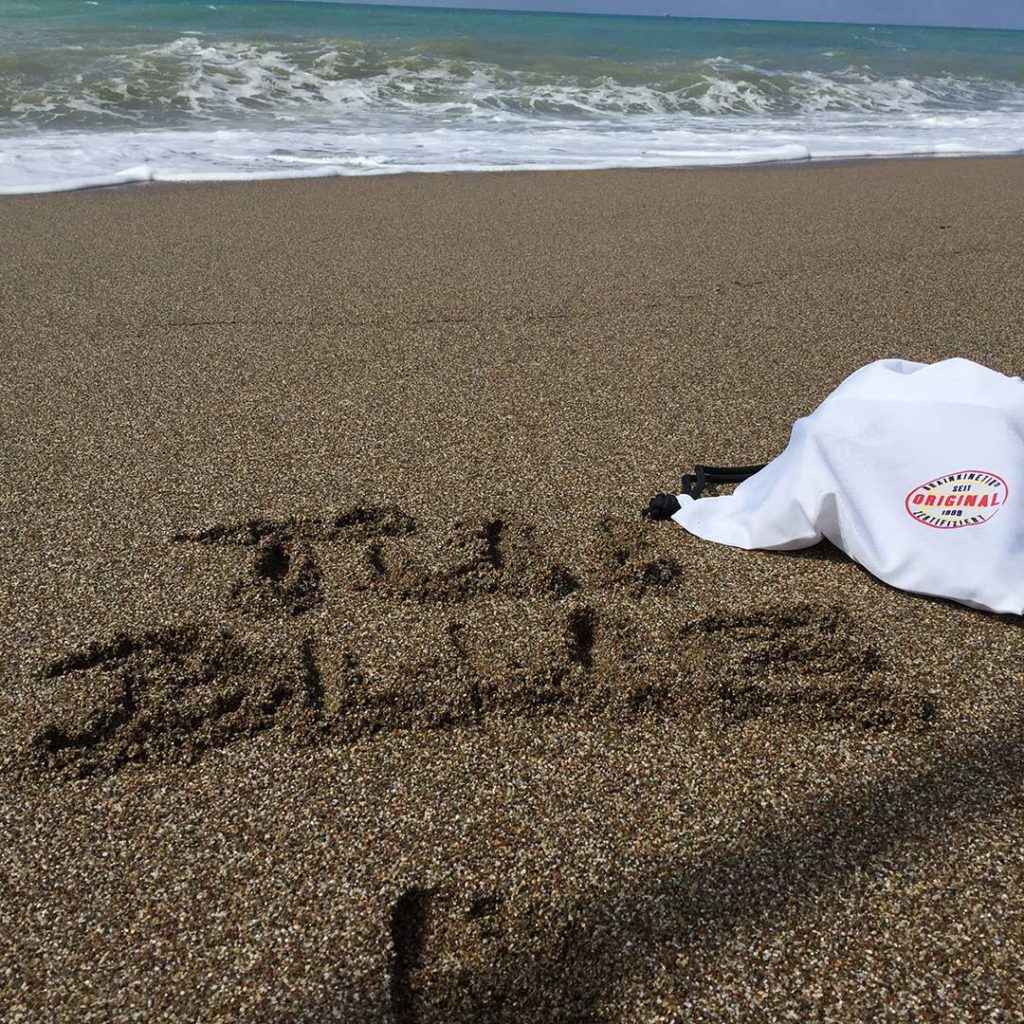 Brain kinetics will soon be available in many TUI BLUE hotels, such as the TUI BLUE Palm Garden here.

Then, unfortunately, I have to go again – the next appointment is waiting. And while I sit on the plane and think about my everyday work, Oliver’s words run through my mind:

“The world is spinning faster and faster. Instead of finding rest in the midst of it, we’re just trying to work and somehow keep up with the speed of our times. Any private or professional stress can be the beginning of a downward stress spiral. Brain kinetics aims to counteract this development.”

Next time I’ll book business class. Then I’ll have time to train my brain right then and there.

Lars loves to explore new countries on his own and to do sports in natural places.