Archery at TUI BLUE: How I Hit the Bullseye

25 Mar Archery at TUI BLUE: How I Hit the Bullseye

Every muscle in my body was tense. I blinked through the narrow slit of my squinting eyes and tried to focus on the centre of the target. Tightening my arm, I released the arrow with my other hand in one smooth motion. With a faint whistle, it shot through the air – right past the target. “Don’t worry, just try it again,” Cookie said, handing me the next arrow with a smile. Cookie was the a BLUEf!t Guide at the TUI BLUE Palm Garden in Turkey who was teaching archery to me and my girlfriend, Barbara.

Before my stay at the TUI BLUE Palm Garden, I had learned on the BLUE App about the activities in the hotel and was immediately excited about archery. Although archery was originally a hunting method and a warfare tactic, for me the sport is just a great exercise in precision and concentration. Archery also requires a lot of skill, which I’ll get to later.

Following in the footsteps of Robin Hood

At TUI BLUE Palm Garden and TUI BLUE Sarigerme Park, archery is one of the many experiences and activities available to guests with an all-inclusive stay. Of course, you don’t have to twist my arm to get me to try something new, so I had already done wind-surfing and parasailing on my holiday.
This particular day, archery was on the agenda. The exercise area where we were supposed to practice with bows and arrows was well-removed from the main road, hidden behind a protective stand of trees. So no guest was in danger of accidentally running into a hail of arrows. It was also a crucial rule that no participant could move onto the green area toward the targets until everyone had finished firing their arrows. But before that happened, we had to meet our coach, Cookie. As a BLUEf!t Guide, he was qualified as a personal trainer and in a variety of different sports and training methods. He took the time to explain the equipment and the most important rules for all the students in detail. We would shoot arrows from about ten to fifteen metres away from the targets. That sounded like a great distance at first, given that professional athletes deal with distances from 70 to 90 metres. But the training session would teach me a lesson or two. 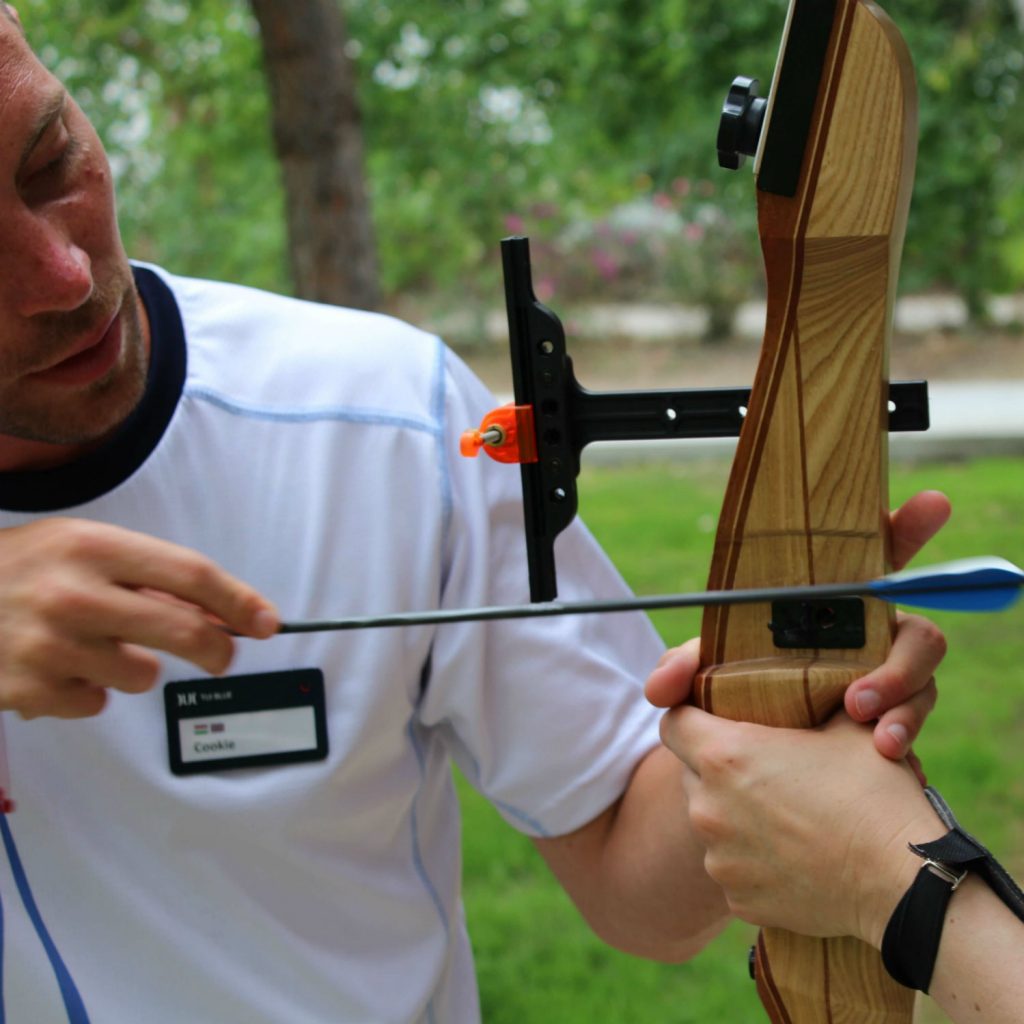 In archery, the most important thing to remember is this: concentration rather than force.

Cookie handed us each a leather bracer, which we attached to our outstretched arms. “This will protect against injury. The arrows will fire with enormous speed and momentum, and if one makes contact with you, it’ll hurt like a beast.” To prevent this from happening, he showed us the correct posture. “Position yourself laterally to the target with your feet shoulder-width apart. Shoulders and hips should be in line with the target. The foot closest to the target should be angled about 45 degrees. Now distribute your weight evenly between both legs, which will allow you to absorb the recoil of firing arrows.” Also important: Loosen up! Your shoulders should be down, your legs shouldn’t be extended, and your grip on the bow shouldn’t be too tight, or you’ll throw off the trajectory. You don’t introduce tension until the bow is raised. I lifted the bow up to shoulder height and corrected my posture again. With my arm outstretched, I planted both feet firmly on the ground. I then looked through the sights at the point of the target I wanted to hit. With a slow and steady motion, I pulled the loaded bowstring back until my hand touched my chin. Now, with my back and shoulders tensed, I tried to breathe as steadily as possible so as not to move. I stood still for one final moment, feeling almost like a stone sculpture, before releasing my fingers from the string and letting the arrow fly. The arrow shot so fast that I couldn’t even see it. I only saw where it didn’t land: the target. I immediately wanted to try again! And behold, after a few attempts, the first arrow hit the target. Then another one. And another one. The trick was to repeat the sequence of movements as evenly as possible and to always stay focused. Cookie taught me another trick: after letting go of the bowstring, the shooter should remain in the shooting position for a few more seconds to avoid any last second movement that might throw off the arrow’s trajectory. 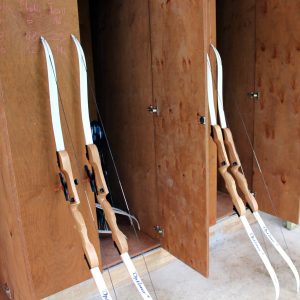 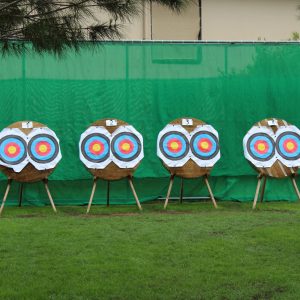 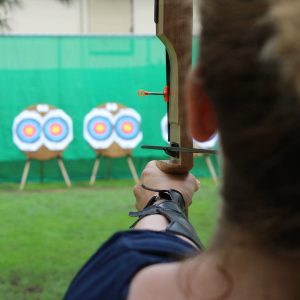 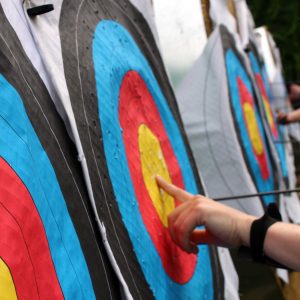 After shooting my own arrows and waiting for the other participants to finish, we all approached the targets together to pick up our arrows and count our points. Laughs broke out here and there as some participants found a direct hit. Now I was getting ambitious! Barbara was also progressing quickly, getting more points than me! That wouldn’t sit with me. Once again, I grabbed my bow and arrow, got into position, and mustered up my concentration. I squinted through the sights once more, letting the arrow go one last time. With a whirring noise, it shot through the air and landed with a beautiful thud right in the middle of the target. BULLSEYE! I cheered, grinning like an idiot. Even Cookie nodded his approval: “Good shot!” It was also my last shot, because the hour of our introductory course had flown faster than my arrows. Almost a little sadly, we returned our bows and arrows to the closet, but we had our next training session with Cookie already in our sights.